Motorcyclists have been arguing about the respective benefits of hard luggage vs. soft luggage for years, and no matter your feelings on the subject, one thing is generally accepted: soft luggage has a weight advantage over hard luggage.

So, when I headed to Labrador on my Yamaha WR250R last summer, I decided to use soft bags, to make the little bike’s workload somewhat lighter. And, since I hadn’t tried anything from Giant Loop’s line in several years, I decided to see how its improvements over that time had worked out. A few days later, a package arrived in the mail with a bunch of Giant Loop’s bags. Below, you can see thoughts on these individually.

Several companies make a wrap-around tailbag now, but the Coyote is still one of the best, and it was one of the first. The idea is that this bag wraps around your bike’s tail section, with the lower legs strapping down somewhere around your passenger footpegs. This means you don’t need a pannier rack to keep the bags from swinging into your rear wheel; they wrap around the bike’s bodywork, and that’s good enough. 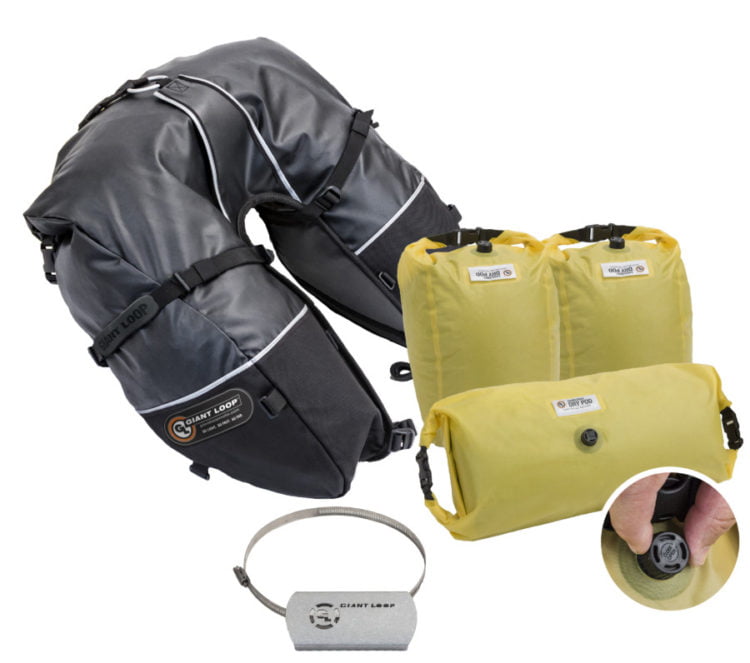 When you buy the Coyote, you also get a set of three waterproof internal bags, and a heat shield that keeps your high-mount exhaust from burning a hole in the Coyote. I didn’t use the heat shield this time, as the WR comes with a big plastic heat shield, but I have used Giant Loop’s shield on my DR650 for years.

When you first pick up the Coyote, there’s a dizzying array of straps that initially reminds you of some sort of restraint garment from an insane asylum. There’s a set of straps on the top of the bag that can be used to attach it to a tail rack or other mounting point. Another set of straps at the bottom of the bag keeps it attached to the passenger peg assembly. There’s another set of straps about half-way up the legs of the bag, and these could theoretically also strap the bag to your subframe, but are more likely to be used to keep the bag cinched down and tight, or to attach a Possibles Pouch or other gear to the exterior.

However, the more you use the tailbag, the more you get used to using the straps. Throw the bag over the tail section, attach all the straps, and tighten them down. And, if you’ve got other gear to attach, then use the straps for that purpose as well. Although capacity of the Coyote is officially rated for 39 litres, you can actually use it to haul much more, as long as you don’t mind strapping it down to the bag’s exterior.

Giant Loop doesn’t claim this bag is waterproof, because the seams stitched into the bag can leak water (seam-sealer will help prevent this). However, the latest version of this bag has done away with the zipper that used to run outside the bag, to close it. This zipper was a potential failure point, added to the cost of the bag, and also a potential leak point. Instead, Giant Loop has modified the design to incorporate a rolltop closure. Giant Loop ships the Coyote with a system of three roll-top waterproof liner bags that you can use to organize internal contents, as well as keep water intrusion at bay. 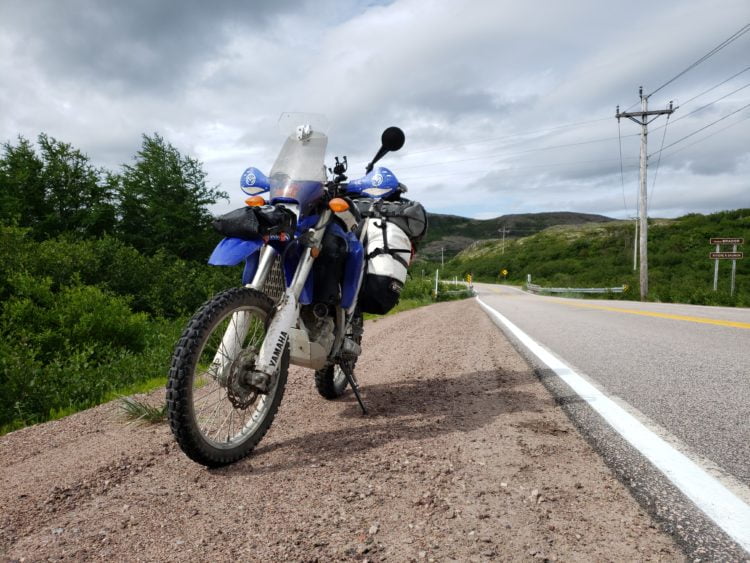 One really nice thing about the Coyote bag is its low profile on the side of the bike. It doesn’t catch much wind, or trailside brush. Photo: Zac Kurylyk

So how well does it work? The Coyote does some things really well, some other things not so well.

Here’s what it does well: the Coyote is a tough, rugged piece of kit that can haul a lot more gear than you initially think it can. On bumpy roads, or off-road, it’s easily tightened down enough so it doesn’t wiggle all over the place and end up loose. When the bike moves, the Coyote moves with it, instead of flopping around. Because it doesn’t need side racks, it has a very low profile and doesn’t catch much wind. You can still tell there’s extra weight on the bike, but for a rider who wants luggage but still wants the bike to feel tight, the Coyote is a good choice.

The main problem with the Coyote is, you have to pack it pretty carefully if you want to access stuff in a hurry. If you want something that’s at the bottom of the bag, you’ve got to unpack half your equipment to access it, and loosen a bunch of straps. Some of this can be overcome by strapping toolkits or other regularly-used necessities (camp stove, food, etc.) to the exterior of the bag, and really, it’s not too bad if you’ve just got the Coyote by itself. If you have a dry bag or other larger items strapped to the exterior of the Coyote, then accessing its contents quickly gets to be much more of a hassle, because everything has to be tightened down again once you’ve loosened it to access the contents. 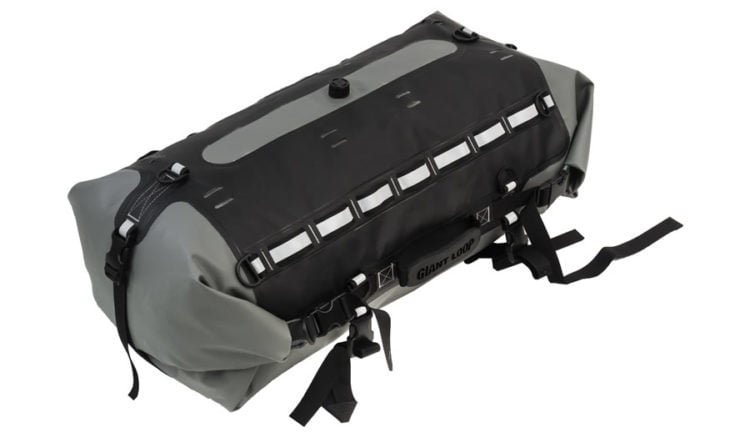 The Tillamook bag is an absolute unit when compared to the lightweight dry bags you get at Wal-Mart. Photo: Giant Loop

The Tillamook is a double-ended dry bag with rolltop closure, 48-litre capacity, and a lot of exterior attachment points. This bag is covered with daisy-chain style attachment points, as well as four quick-release anchor straps that you use to attach the bag to your bike. And there’s also a set of points for attaching backpack straps, so you can carry this long distances off the bike.

The idea is that you can use the Tillamook to supplement a set of saddlebags or panniers. Given its massive size, it’s probably better-suited to throw across the top of a set of hard aluminum panniers on a GS, V-Strom, whatevever, but you can also perch it on a rack behind the Coyote, and strap the two together. That’s what I did on my trip to Labrador; I needed the Tillamook’s storage for my oversized Big Agnes Hog Park 20 sleeping bag and my Thermarest self-inflating insulated pad. 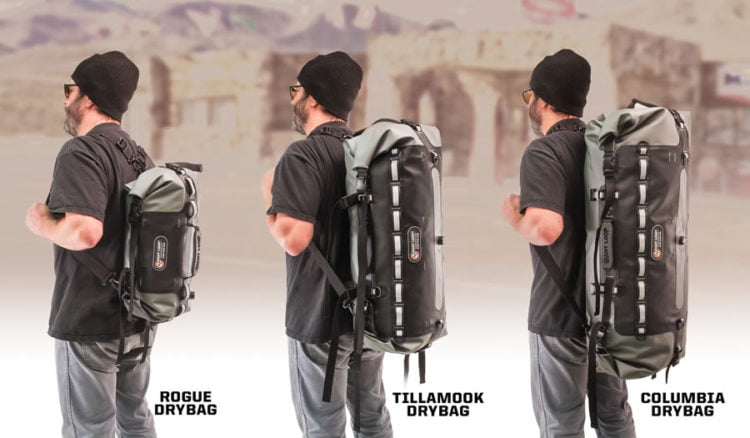 You can use the Tillamook as a backpack, although it’s probably not super-comfortable. Photo: Giant Loop

In this application, the Tillamook didn’t strap down quite as tight as the Coyote tailbag, as it just wasn’t as well-supported—it wasn’t the bag’s fault, I just had a teeny-tiny tail rack on my WR.

However, it swallowed a ton of camping gear, and also proved to be a very handy attachment point for other gear. I traveled most of the Trans Lab with my mil-surp canteen hanging off one of the Tillamook’s attachment point, as well as my collapsible fishing rod. I easily strapped my hammock’s rainfly to the Tillamook when I needed to dry it out. Same went for other gear. And, if I needed something inside the Tillamook, it wasn’t difficult to open one end of the bag or the other, sneak out the gear I needed, then roll it all closed again quickly.

I did have to use a bit of complicated strap routing to keep the Tillamook tight to the Coyote, but really, it wasn’t too bad. Nothing fell apart with this bag, and the only thing that would stop me from recommending this to another rider is the price tag. You can get a dry bag for much less money from Wal-Mart—but it won’t be double-ended, won’t have all the exterior attachment points, and won’t be as rugged. Take care of the Tillamook, and it should last you for decades. 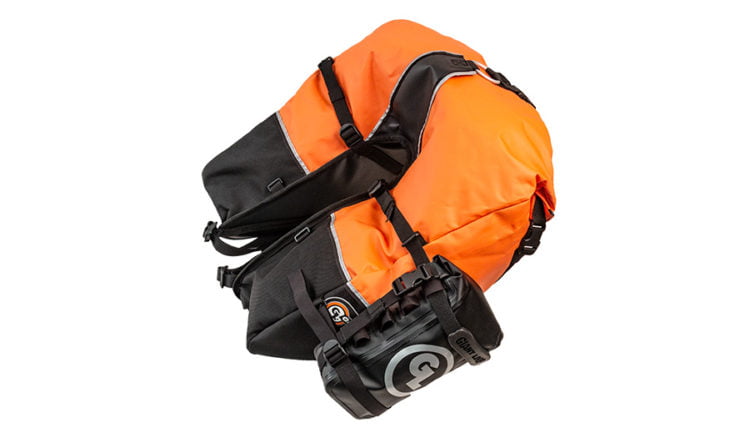 The Possibles Pouch straps conveniently to the side of the Coyote saddlebag, as well as other luggage from Giant Loop. Photo: Giant Loop

With the Coyote and Tillamook bags both offering external attachment points, Giant Loop also chose to make a small dry bag that can be strapped to the outside of its bags. You can also attach it to the crash bars of bigger adventure bikes, or anywhere else it fits, really. I attached it to the side of the Coyote and found it mostly stayed right where I wanted it.

The rolltop closure on the Possibles Pouch means water and dust are kept out, so this bag is excellent for hauling tools or an air compressor, stuff you really don’t want getting wet and ruined. That’s what I used it for, and will continue to use it for in the future, as I had no complaints at all. It’s solid kit that gets the job done.

Roll that top closed, strap the bag to your front fender with the bungee hooks, and you’re in business. Photo: Giant Loop

This is basically a Possibles Pouch, but with a set of bungee straps built in, with clips that are used to attach to your bike’s fender or number plate. The strap/clip assembly overcomes one of the problems found with other fender bags, as it’s less likely to slack off, if you’ve installed it correctly. I traveled across Labrador with no issues at all.

However, when I put the Fender Bag on a Honda CRF450L, I did notice it sliding around a bit once I got into bumpy stuff, and I actually had it fall off during the Fundy Adventure Rally. Thankfully, I didn’t lose it, but it shows that for some bikes, it doesn’t work as well on the front fender. For those machines, you should look at number plate placement.

Otherwise, it’s a bit pricey when compared to the competition, but it’s waterproof (your tire levers shouldn’t rust), and a generally-speaking more solid arrangement. I’d recommend looking at it, but I think I’d prefer a second Possibles Pouch for adventure bike usage. For enduro bikes, where you don’t have as many attachment points, the Fender Bag may be more useful. 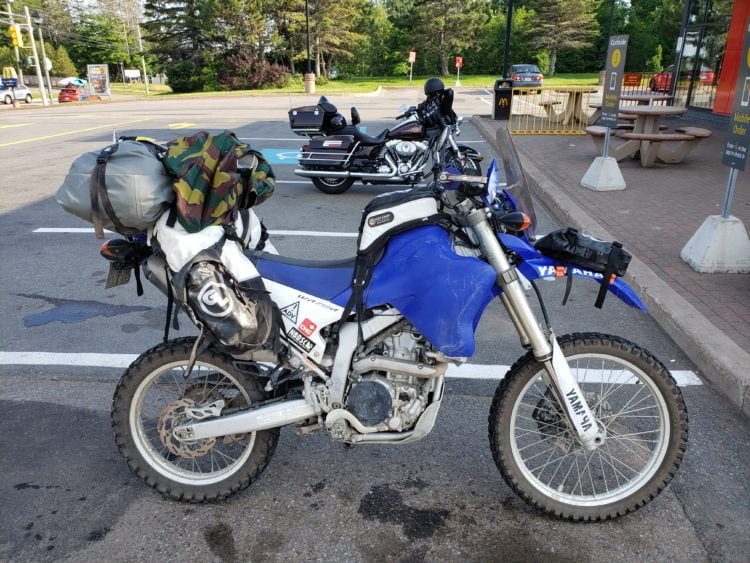 At this stop at the end of the trip, you can see the entire luggage set, as well as the Diablo Pro tank bag. The fender pack stayed in place the whole trip, and the Tillamook proved waterproof and rugged. The Coyote was also trouble-free, and having the Possibles Pouch mounted to the side made access to tools easy. Photo: Zac Kurylyk

Giant Loop has more competition than ever, with Tusk, Mosko Moto, Kriega, Wolfman, Nelson Rigg, Gears Canada and other soft luggage manufacturers all selling or about to sell rackless luggage systems. However, Giant Loop’s products continue to evolve, while maintaining their rugged construction that has typified the brand from Day 1—along with its mantra of “Go Light, Go Fast, Go Far.” The Coyote and the other dry bags enabled me to do this over my Labrador trip … well maybe not the fast part, as I was on a two-fiddy. The point is, this kit enables to keep a quick pace offroad, if you and your bike are capable of it, and for that reason, I think this luggage still has a strong spot in the marketplace, despite the increased competition.