Cameras have become a big part of the motorcycling community.  With today’s compact cameras, you can easily share your travels and adventures with friends.   And, that’s a good thing.

But the compact camera field is becoming quite crowded.  A dizzying array of cameras is available, with one brand dominating the industry.   So when Thinkware contacted me to and asked me if I would test their new M1 Motorsports camera (M1), I was happy to oblige.

What’s interesting about the M1 is that it consists of two camera recording heads.  The heads allow you to take video simultaneously from different angles.  In my case, I decided to mount the camera heads facing towards the front and the rear.

Another interesting feature is that the camera shoots video in 1-minute intervals.  That’s helpful to keep the file size down, but can be a hassle if you want to share a longer video.

Inside the M1’s box, you’ll find pretty much everything you need to get the camera up and running.

From my perspective, there are a couple of other things I would like to have included in the box, but we’ll discuss that later. 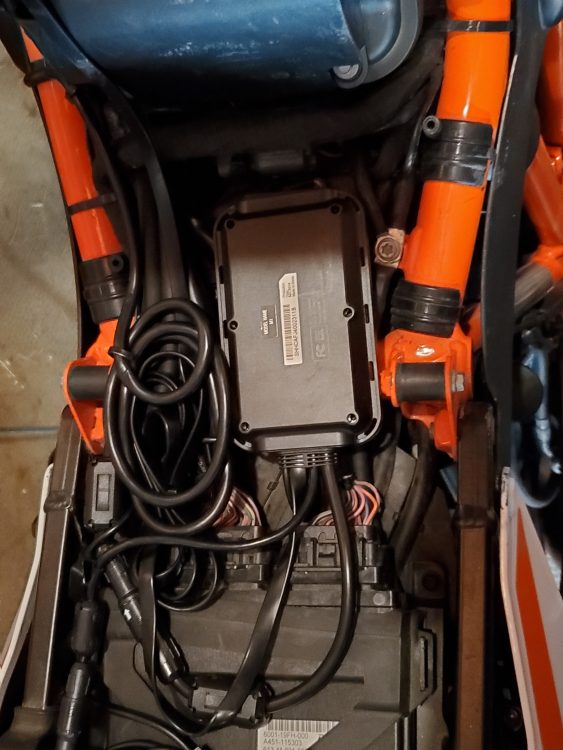 The small box at the top of the picture is the M1’s “Control Unit.” Note the excess front camera cable beside it. Photo credit: Mike Botan

The SD card is easily removable, but you will have to make sure that it is mounted in a readily accessible place.  For this test, the main unit is mounted under my KTM 1290 SA-R’s seat.

The cameras have an IP66 rating and are water-resistant.  IP66 considers that the unit is “dust tight” and protected against powerful jets of water.  However, the M1 is not certified for immersion.

Installation takes time and some careful planning.  The M1 camera heads are connected via a cable, and there is plenty of it.  The front camera cable measures 2 meters (~6.5 feet) in length while the rear camera cable measures 1.5 meters (~5 feet).  There is also a separate cable for the “remote control” (automatic/manual recording switch), which measures 2 meters as well.  All up, it’s a lot of cables to manage. 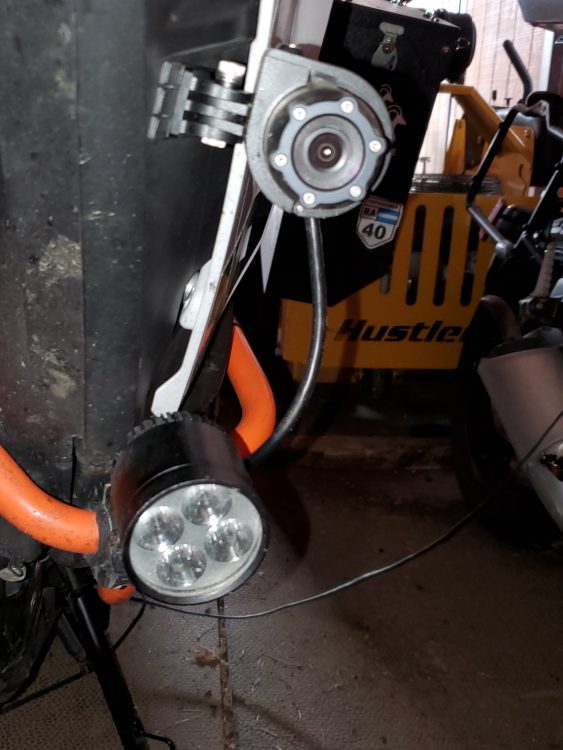 The M1’s front camera mounted just above the auxiliary lighting. Note: the small cable seen in the photo is not associated with the camera.  Photo credit: Mike Botan

The upside of having so much cable is that you have plenty of alternatives for locating the camera heads.  The potential downside is that if you don’t use a significant amount of cable’s length, you’ll have to tie wrap and store it somewhere on your bike.

The camera heads are cylindrical, and a metal mount holds them with a flat plastic foot.  The foot uses 2-sided tape to mount the camera to the bike.  While the tape has held up well so far, a more positive mounting method would be better. 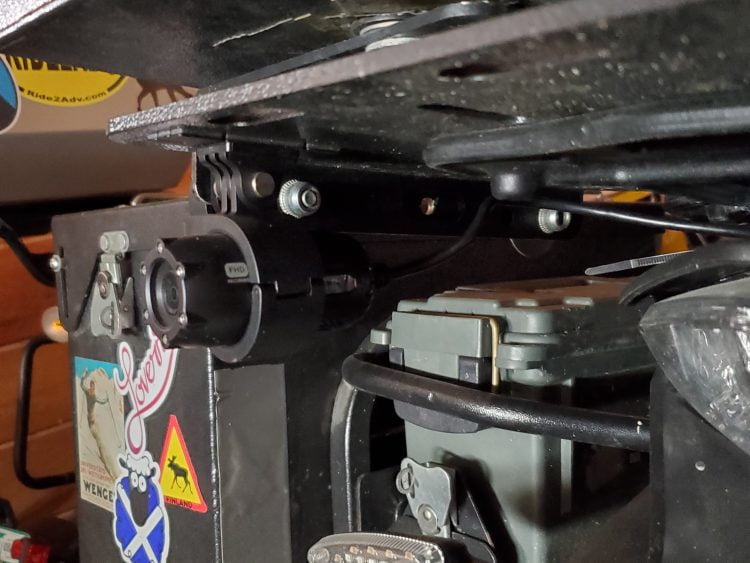 There are small holes in the mount’s feet that could potentially take a pop rivet.  But I’m willing to gamble that most riders would not choose to rivet the camera to their bikes.

If the M1 came with a mount that could attach to a round surface like an engine guard, tc., the installation would have been much easier.  Still, I was able to find a couple of locations where the cameras and remote control could be mounted.

Once mounted to the bike, it was time to go for a ride.  The M1 turns on automatically unless you use the remote control to operate it manually. 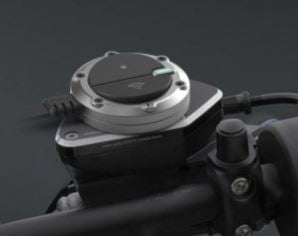 If you wish to use the remote control, you push a button and check a small LED to ensure that the cameras are operating in the desired mode (automatic or manual).  Unfortunately, the LED is not very bright and is difficult to see in even moderate sunlight.  For that reason, I left the cameras in the automatic mode most of the time.

The M1 cameras have some novel capabilities that other action camera brands do not.  For example, the M1 incorporates “Advanced Electronic Image Stabilization (EIS)” which Thinkware says helps keep the picture stable even when you are on rough terrain.  Another feature is the camera’s “night vision” capability which allows the camera operate in low light conditions.

Another claimed feature is WDR; Wide Dynamic Range.  It is supposed to ensure that the recorded image always has the right contrast.

So let’s get down to how the cameras performed and whether the claimed features are of significant benefit.

Once out of my 9-degree incline driveway and onto the road, I got on the throttle.   It was a bright fall day with nary a cloud in the sky.

The fall colors were beautiful and the M1 did a good job maintaining the color of the scenery.  The image could have been better, and there’s some fish-eye effect.  Unfortunately, the M1’s picture quality isn’t as good as some of the other brands out there.  Sometimes the video became very grainy and then cleared substantially revealing excellent color and much better definition.

When I first started, the sun was still rising in the sky and at times flashed through the trees.  Visibility was sometimes difficult for both the rider and the camera.  When the sun burst through the trees, both the and I camera suffered from a very brief loss of picture clarity, it was that bright.  But the M1 handled the situation better than other similar format cameras I have used.  The WDR  feature seems to reduce the strobing effect of the bright sun, but will not eliminate it.

I recorded while riding a 4.2km (2.6-mile) long, potholed dirt and gravel road on the side of a Vermont mountain.  It’s mainly firm hard dirt with loose gravel strewn about and is quite bumpy.  It’s the road to/from my house.

The camera did a decent job of stabilizing the video footage.  I was going between 35- 55 MPH during the filming and the camera held a fairly stable image as I motored along over the dirt, gravel, and potholes.  Remember that the camera is mounted solidly to the bike so there’s no vibration damping.  Over the most rough parts, the video exhibits some shake, but it’s less than what it probably experienced.

So is the M1’s EIS any good?  It does a decent job of mitigating the impact of bumps etc.  It’s not in the realm of a gyroscope stabilized camera, but the M1’s price isn’t in that ballpark either.  Ultimately, it’s a nice addition.

One thing that is quite noticeable is the scratchy audio throughout each of the videos.  Although the M1 comes with a pair of ferrite core noise suppressors, electronic noise is still an issue.

In addition, the camera’s microphone is in the remote control.  Unfortunately, there’s no way to reduce wind noise when the bike is at speed.  That’s one of the things that I wished had come in the M1’s box.  Perhaps with a foam wind muff placed over the remote, the sound of the wind rush could be reduced substantially.  In my opinion, sound quality is one of the M1’s key shortfalls.

I spent a full day out on the road testing the M1 and by the time I returned to the house, it was nearly full dark.  But the M1 was able to continue to record and record quite well given the conditions.  Low light situations often cause cameras to have a grainy effect and the M1 is no exception.  But it was very good at retaining clarity and color even though it was quite dark.

For a camera of its size, I was impressed with the M1’s night vision capability.  We’re not talking forward-looking infra-red camera capability like you might see in military applications.  No, we’re talking about the M1’s ability to film in low light conditions and provide good color while doing it.  Its night vision capability is perhaps this camera’s best attribute.  I would go as far as to say that it has the best nighttime color retention of any small action camera I’ve ever used.

The M1 is priced at $599.99.  While that may seem very pricey, you have to remember that for that price, you are getting two separate cameras.

In case of problems, the M1 comes with a 1-year warranty.

The M1 has some good attributes and some not so good attributes.  Overall, its video quality is behind the competition.  But its image stabilization and night vision are good and very good respectively.

Perhaps the fact that the M1 is adapted from use in automobiles is its greatest shortfall.  Motorcycles have certain considerations that differ from automobiles.  For example, the M1 needs something to reduce ambient electrical and wind noise.  Whether it is as simple as providing a wind muff or as complex as writing noise reduction software, the sound quality needs to be addressed.

Since motorcycle surfaces are mostly curved, a set of mounts that clamp to rounded surfaces would help immeasurably.  There are not a lot of flat surfaces on motorcycles and having to find one to attach the camera via 2-way tape is not a highly secure mounting method.

All in all, the M1 is a decent camera with pluses and minuses.  In its current state, I think the M1 would be a better camera for the ATV community than the motorcycle community.  ATV’s often run at slower speeds and there are plenty of flat surfaces for mounting points.  But with a little more work, and some fairly simple upgrades, the M1 could become a very good option for the two-wheel world.