As riders, we have excellent network connectivity choices. We can update loved ones, navigate precisely, and avoid challenges with deteriorating weather and road conditions.

Where will the next decade take us?  Time to dream big riders. The sky is literally the limit.  First, we’ll review where we are today, then let’s look at the technology on the horizon and finally we can speculate wildly!

A partial map of the internet from 2005 shows just how interconnected we are with the number of devices and paths between them expanding constantly. 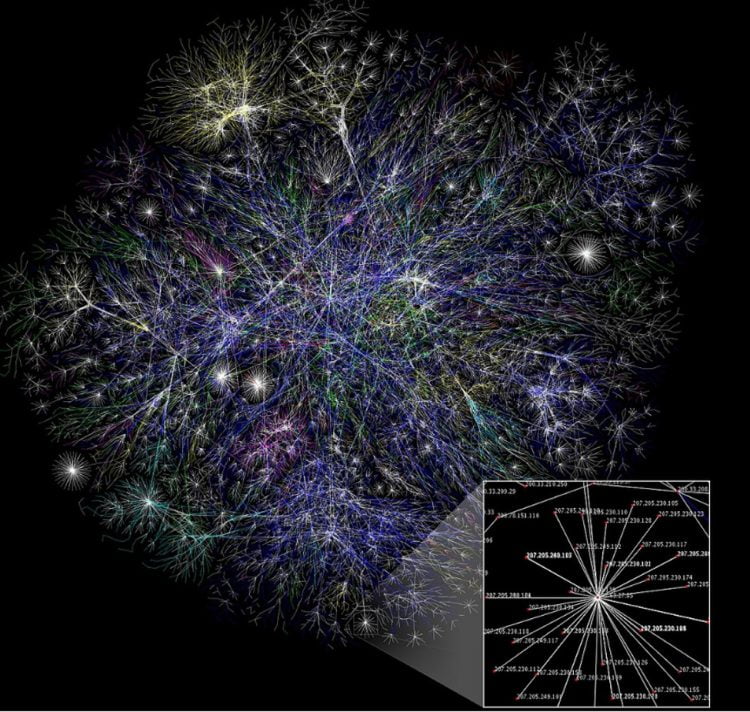 Programs for navigation provide simple, near-global route mapping.  These packages each have strengths and weaknesses so keeping multiple navigation apps loaded and ready to go is wise.

Wide area terrestrial telecom coverage for adventure riders improves every day but there are many times when we lack LTE coverage.  Packages such as maps.me and Google Maps provide offline modes where prior downloaded maps and the inherent GPS capabilities of the device keep us located and navigating. Waze is inherently online and is worth having for use in traffic given its real-time updates, slick user interface and for me, visual integration with Spotify.

Here’s a quick overview of maps.me.  I used this navigation app across the steppes in Mongolia and it consistently guided me to my destination even when several similar looking tracks would fan out toward the horizon. The video is for hiking trails but the same applies to obscure tracks in all corners of the globe.

Google Maps is a global standard. Check out  Zac’s recent article on Google Maps Updated Look.  Oddly, when I rode in Morocco Google Maps simply didn’t work, not even in offline mode.  Luckily Waze did work which was a pleasant surprise.  Once I had the package on my phone, I enjoyed its slick presentation and real-time updates.  Check it out:

I gloss over the fact that throughout Asia, Europe and my travels in North Africa buying a SIM card at every border is a given. Month-long deals are available for the equivalent of 10-20USD.  In Morocco, I pulled into the first gas station off the ferry and lined up for my cheap virtual tether to the world.

For the real cheapskates out there (of which I am one) every MacDonald’s on earth has free Wifi and once you are recognized at one you are known to all. When I passed through the Baltics I waited until Germany to buy a SIM card.  It’s great to have choices!

For solo riders, who travel beyond LTE coverage, today’s options for “always-on” connectivity are satellite-based.  Let’s face it, this is a safety and peace of mind issue for ourselves and loved ones at home.  These devices range from affordable simple transmit location plus a pair of status messages (I’m safe, or, Send Help) to expensive voice and low data rate satellite hotspots and phones.

At entry-level, there are good choices.  For example, SPOT from Globalstar comes in under 150USD equipment cost with annual subscription packages around the same 150USD mark. Here’s an overview of SPOT (do a local search for SPOT service provider monthly rates in your area).  I carried this device and when I’d use it to transmit the occasional “I’m OK”  message it was quick and intuitive. The video is a bit goofy but it does give a nice overview of the device.

Here is a SPOT coverage map: 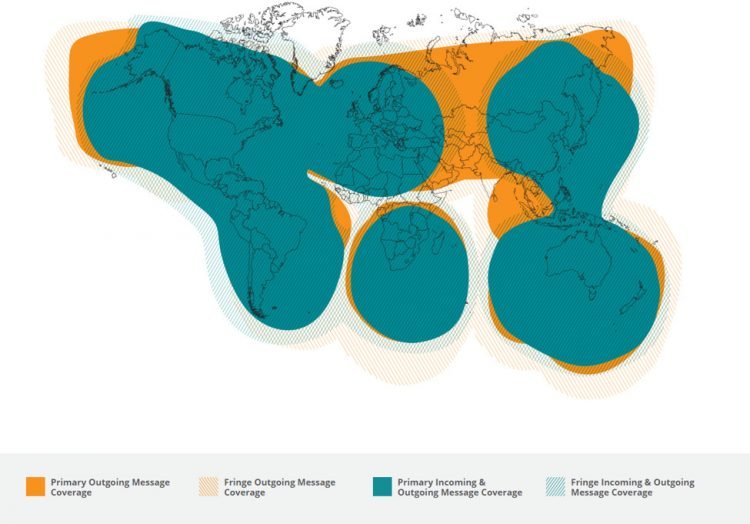 Move up the cost/functionality curve and check out the Iridium GO which provides a satellite-based hotspot for your mobile phone.  The Iridium GO device will cost around 700USD with monthly plans starting at 25USD with many choices in how you expect to connect and use bandwidth.

Here is the Iridium coverage map.  It is very Global and is getting a lot of attention in the offshore sailing community. 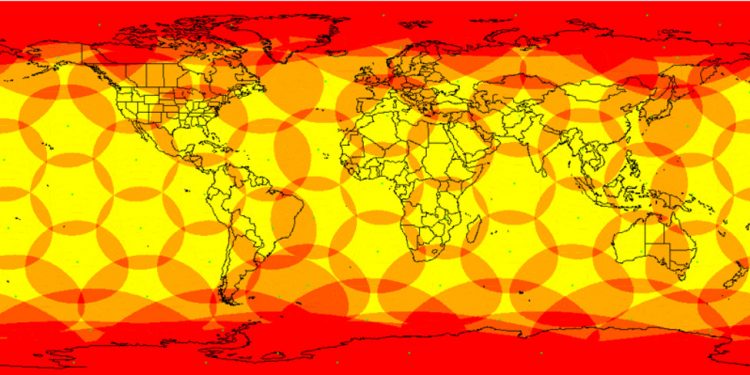 When will the cost/performance curve for satellite connectivity cross over into the mainstream personal telecommunications making the goal of truly global connectivity affordable to adventure riders?

First a review of the technology.   In his article, Starlink is a Big Deal, Jeffrey Paul gives a great summary of satellite communications today and how we got here.  There are some exciting changes coming from satellite technology.  At the turn of the century funding cuts at NASA pushed space exploration into the private sector.

Elon Musk and SpaceX will sling your Low Earth Orbit (LEO) satellite a few hundred miles into space for a fraction of what it cost a decade ago.  Soon, SpaceX Starlink and others: OneWeb, Amazon Blue Origin, and Telesat Canada, will have powerful constellations of LEO satellites orbiting just a few hundred miles above the earth.

These new LEO constellations won’t be the dreary weather sensors and spy eyes of the past, rather some are positioning powerful IP routers in space. LEO constellations minimize delay due to a shorter round trip as compared to geosynchronous satellites which orbit at 27,000 miles above us. These LEO routers will also have deep buffers for data and digital signal processor (DSP) based echo cancellers for voice.  Current and previous generations of communications satellites were referred to as “bent pipe”, meaning no onboard processing but these next-generation birds are giving companies like cisco a new market segment.

Back on earth, if adventure riders are to be afforded cheap, ubiquitous, high bandwidth global connectivity it will first have to work for cars.  Connected cars would provide the volume to drive costs down.  A few years ago, Toyota, working with Redmond Washington based Kymeta said the Satellite connected car would be out this decade.  Here’s a news clip from 2017 covering the technology.

As we saw earlier, satellite phones exist today.  Iridium devices connect wherever you are on earth. That global connectivity relies entirely on Iridium’s existing constellation of LEO satellites.

But Iridium is still relatively expensive and low bandwidth compared to LTE.

The enabler for increased bandwidth in satellite communication is the ability of higher frequency radio waves to transport greater amounts of data (assuming compression techniques offer similar improvements across the frequency range).  Companies like Iridium use relatively low-frequency RF in the 1-2 GHz range.  Radio waves in this range may be received and transmitted using a simple, omnidirectional (stick) antenna at individual user endpoints.

For higher frequencies and the ability to provide more bandwidth (all other things being equal) companies like Kymeta want to use frequencies anywhere from 10GHz to 40GHz and beyond.  Traditionally, at these higher frequencies, devices had to capture the radio waves and focus the energy using a reflective parabolic satellite dish. These alloy apertures have served as the workhorse of the SATCOM industry for many decades.  When you place a parabolic dish on a moving vehicle (land, sea or air) then the gimbal mechanism used to stabilize and point the antenna is bulky and expensive. The image below is actually for communicating “on the pause”. Only then can the antenna deploy, acquire and track the satellite. 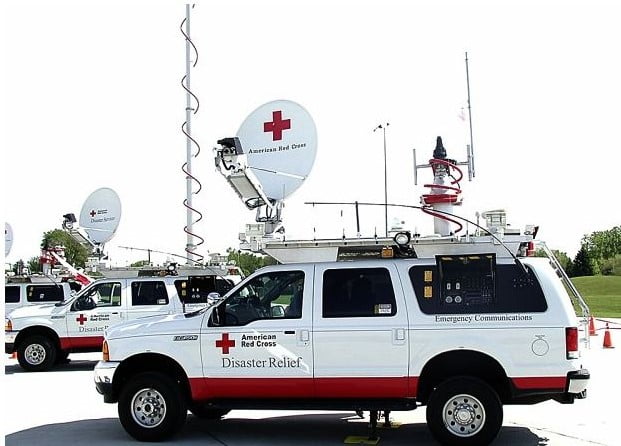 Next-generation satellite antennas will capture and form beams of radio waves using flat panels that sense and create (receive and transmit) energy at varying angles.  This beamforming and steering alleviates the need for parabolic reflectors and mechanical gimbals and allows designers to integrate antennas into flat, upward-facing surfaces.  Mobile phone technology uses these techniques but over relatively short distances today.  A great overview of electronic beamforming used in flat panels is given in this short video:

The underlying technology for flat panel antennas is evolving quickly.  We talked about Kymeta who uses LCD technology (same as in flat-screen TVs and monitors – a great volume driver). Other companies like Anokiwave in southern California are developing silicon for antenna developers to create arrays for various markets.  This boutique silicon is much like what companies such as Intel do for smartphone and computer equipment vendors.

So flat panel technology exists today that can go on the roof of a car and connect that vehicle via satellite to the internet at impressive data rates (multi Mb/s). It is expensive and not all the assets are up in space to give global LTE like service. When will the surface offered by a motorcycle helmet or gas tank be sufficient to form a beam to send and receive data to these soon to be application hungry LEO constellations? My thinking is we are at least a decade away but I suspect there are ADV inmates closer to this technology than me. It would be great to hear your thoughts!  Remember, dream big, it’s free.

Finally, designers at Apple, staying true to form, will go it alone on this quest for global access. According to the February 2020 issue of Satellite Mobility World, the Apple approach would offer ubiquitous coverage, albeit at reduced rates, without the need for antenna hardware outside of today’s smartphone package.  Is this the winning combination for adventure riders?  I for one am quite happy to hear that Apple continues to innovate. 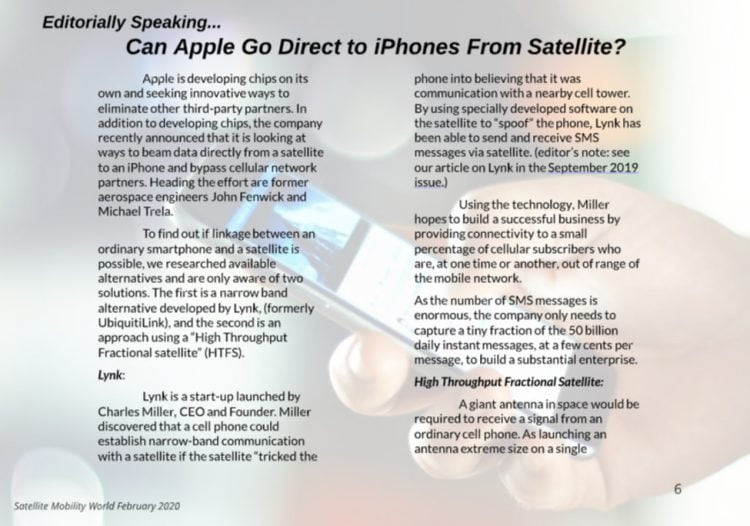 iPhone Direct to Satellite.  For the full article: https://pubsecure.lucidpress.com/SatMobWorldFeb2020/#3z9rJB_FP3w7

What do you think?  Even if you prefer to be completely untethered when you are off the grid fellow riders want to know!