There are many things to think about when heading out on a long motorcycle trip.  What route will I take?  How many miles will I cover in a day?  What do I need to bring?  What’s the best equipment for the task at hand.  What will the weather be like?

Ah yes, what will the weather be like?  Checking the weather is one of those things you may not often think very hard about.  A weather check is are often relegated to checking the temperature and whether there will be any precipitation. 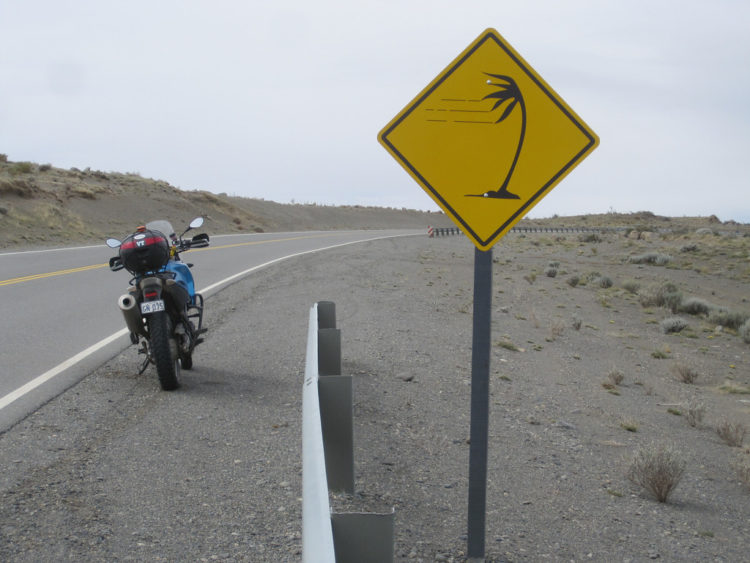 But What About The Wind?

But there is another weather factor that riders should be concerned about.  Wind.  Yes, wind.  Sometimes if decent weather is forecast, we just head out and leave it at that.  But is it smart to do so?  What if you are in an unfamiliar part of the world or near mountains?

For these types of situations, it best to have a look at predicted wind or at least make a judgment about it before you head out.  If you live in a part of the world where there is little wind, forecasts may not even discuss the wind.  However, when you are in an area that often has to deal with wind, information and warnings can be pretty easy to find. 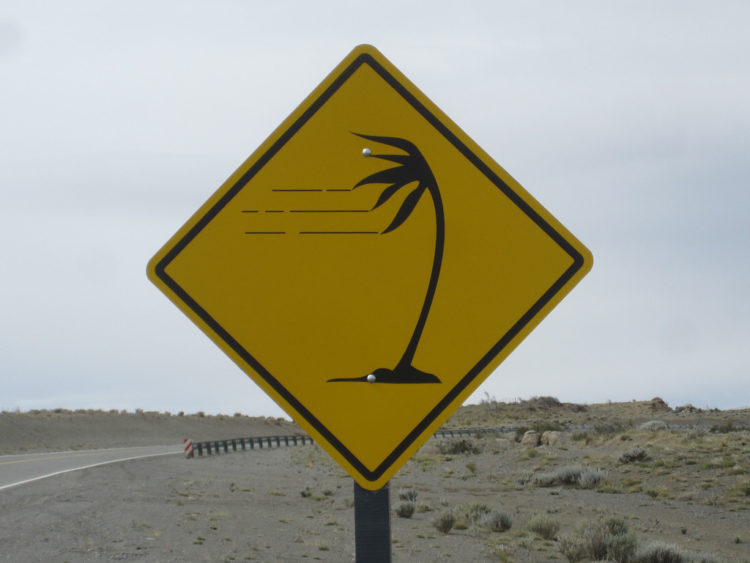 Check the obvious if it’s available.  TV, radio, newspapers may not specifically address the wind but you can get at least a little background information on what to expect.  If you have connectivity, there are many ways to check up on the wind.  There are several good sites that provide a quick and excellent picture of weather and the wind.

One of my favorites is Ventusky.  It’s an overall weather tool and it has excellent wind information.  Presented on a global scale, you can scroll down to small areas so you can see what’s going on in your area.  It even lets you select the altitude above sea level to see whether the winds may be different at higher elevations.

It’s beyond the scope of this article to advise you how to predict wind.  But it’s safe to say that if you are on the lee side of a mountain and significantly stronger weather is approaching or exiting, be ready for high winds.

There have been times where I either didn’t check for wind, ignored warnings or failed to pay attention to it.  They were big mistakes and ones I am not interested in repeating again.

For instance, I was riding in Iceland one time and noticed a waterfall.  The water was not falling directly to the ground.  In fact, it fell somewhat and then was blown back up the fall or blown apart.  Like this…

Even with this information in plain sight, I foolishly chose to ride over a nearby mountain to my destination for the evening.  Once we crested the mountain, the wind intensity increased drastically.  My wife Kim who was following me was literally blown off her bike.  She chose to walk down the mountain.  I was able to get down, but when I hitched a ride back up the mountain to retrieve her bike, I could not even open the door of the car on the side facing the wind.

Even when there is no weather to speak of, differences in pressure funneled by geography can lead to high wind.  Like this…

For example, here’s a video of my wife Kim riding in Patagonia (yes that Patagonia, known for its constant and often high winds).  Although the weather is beautiful, air flows across the Andes mountains and accelerates.  There is little in the way to slow it down as it descends.  The result is a gusty, incessant wind.  All the movement you see of the camera shaking and Kim drifting towards the centerline are caused by wind.

When you get warnings, take advantage of them.  On a rainy and miserable day we were riding in Newfoundland.  The rain was coming down steadily and it was cooling down.  We were on a paved road and the surface was good.

As we rode along, about 25 miles from Port Aux Basques, we saw a large yellow road sign like this one.  Only the one we saw had two yellow lights on it and they were flashing. 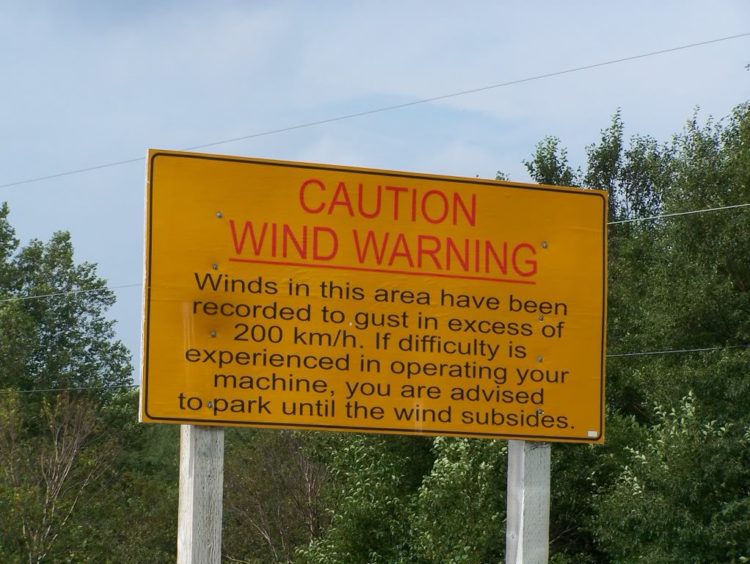 We foolishly continued on and it was the most frightened I’d ever been on a motorcycle.  We were caught in what is known to locals as the Wreckhouse winds.  Both Kim and I were nearly blown off the road.  We thought about stopping but we knew we would be blown over if we stopped.

Apparently, the Wreckhouse winds are well known by the locals as wind spills off the flat top mountains and descends toward the ocean.

Luckily, we did make it to the docks at Port Aux Basques but others weren’t so fortunate.  While waiting in line for the ferry, we spoke to a few people about the winds.  One couple was blown off their bike.  A group of guys we talked to stopped and knocked on a house door and spent the night sleeping on the garage floor.

Many of us don’t have to regularly worry about high winds.  Wind isn’t something we might often consider.  But particularly as you travel to places you may not be familiar with, it’s important to pay attention to the wind.

If you’d like to see a bit more about the mistakes we’ve made (and some of the great times we’ve had) head on over to the ADVRider Epic Rides forum and search for Ride2ADV.