I’ve long been an ATGATT guy.  Having ridden motorcycles for about 40 years now, I am always ATGATT, some would say perhaps to an extreme.  When riding on pavement, I’m wearing a Stich with armor, full face helmet, dual sport boots, and gauntlet gloves.  I’m pretty well covered, even when it’s ridiculously hot.

It wasn’t always that way though.  Back in my early riding days, let’s say 1983 to be precise, I had an experience that I will never forget and that I learned from.

I was a cop and had a weekday off.  Less than a year earlier, I had graduated from the police academy and absolutely knew I was invincible.

No this is not my bike, but it is the same model less the blue windshield and the 4 into 1 exhaust.

My wife Kim who is a nurse was working.  She had ridden her Suzuki GS 550ES to work which was only a few miles away. 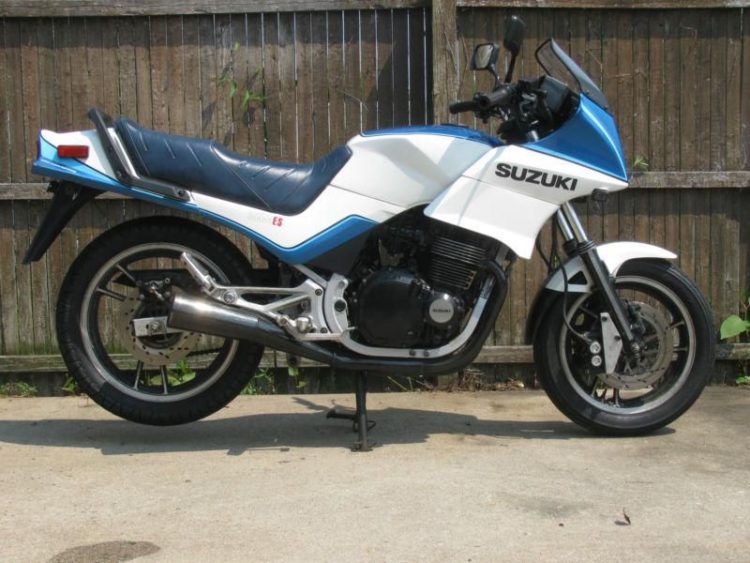 Just an example of what she rode. What do you think of that 15″ from wheel?

It was a beautiful hot summer day and I decided to ride to her workplace and take her out to lunch.  Luckily, I was always Mr. Full Face Helmet.  Other protective gear, not so much.  Besides, it was hot out.

When I arrived, Kim decided that we should ride home and eat there since it would save money.  We had two new bikes to pay for you know.  Since we didn’t have much time, Kim jumped on my bike and rode with me.  Off we went on a 5 mile ride back home.

We were literally less than a 1/4 mile from home on a straight state highway road.  We were going the speed limit and a pickup truck was stopped at the intersection to my right.   There was enough clearance and he turned left in front of me.  However, the 16 year old in the car behind him rolled the stop sign and BANG, lights out, everything stopped.

I awoke lying in the road trying to sit up.  I couldn’t because my butt seemed uneven.  Then I figured out that I had been in a crash and something worse hit me.  Where was Kim?  I could only move a little bit, but over my left shoulder, I saw a bunch of people standing around.  I could hear that they were talking about removing Kim’s helmet.  I could see they were not rescue personnel.  I remember screaming for them to leave her helmet on until the ambulance came.  I don’t remember much after that until I was delivered to the hospital by my friends who I had worked with on so many rescues.

I again awoke in the emergency room with a bunch of people standing over me.  I remember being very, very cold and asking for more blankets.  No blankets came, they just rushed me to the OR.

A couple of days later I remember waking up in ICU.  Kim was in the room sitting beside me.  She was OK and had luckily escaped with only a concussion.

I found that I had a bunch of tubes sticking in various parts of my body and my right leg was hanging from a pulley attached to the ceiling.  I had shattered my femur, broken several ribs, had multiple lacerations to my liver and a separated shoulder.

A week later I was out of ICU and in a normal hospital room.  Three weeks later I was home; pretty much an invalid.  Lucky for me, Kim is a nurse.  She was there to help me through learning to walk again and countless PT sessions during my more than year-long rehab.  She was and is an amazing person.

During my rehab and for years thereafter, I thought I was the victim.  It turns out that I was wrong.  This was impressed upon me more than 25 years later in 2009.  A lot of water had passed beneath the bridge and after some time off from riding, we were back.  We had also started riding off pavement.

Once again we were riding on another hot and sunny summer day with a bright blue sky.  This time we were riding with a group of about 10 friends and frankly, it was some pretty spirited riding.  We were on both pavement and dirt.

We were just coming off a long stretch of a dirt road onto the pavement at a T intersection.  I was in front of Kim slowing to make the turn onto the pavement.  I looked in my mirror and I saw Kim leaving the dirt and starting the pavement which was covered with small stones and sand.

Suddenly I saw the front wheel turn sharply and she was down.  She had used a bit too much front brake transitioning off the dirt and onto the pavement.  As she slid down the road, all I could think of was losing her.  I was terrified.  I have never been so frightened in my life and I haven’t been so scared since.

I stopped as soon as I could and ran over to her.  She was already up and looking at her bike.  Other than some pain in her hand, she was OK.  She asked me to help her pick up her bike and after a little “recovery” time, she was back on the road riding with the group. 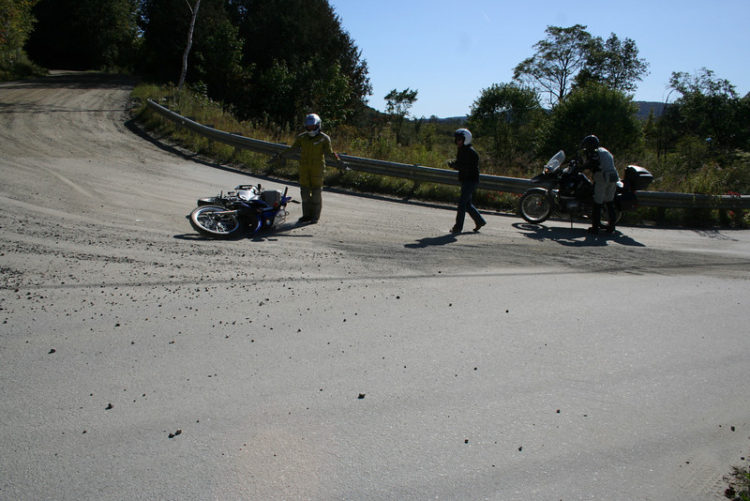 A dejected Kim trying to figure out what happened. Note the front tire “skid mark” transitioning from the dirt to the pavement.  Photo credit: Skip Wareham

It turns out I wasn’t the victim, Kim was.  Kim had seen me rushed into the OR, Kim had stayed with me all the time I was in ICU and in the hospital.  Kim had convalesced me throughout my rehab.  She never once said anything about the experience.  But now, having lived through a few seconds of fear, I couldn’t imagine how difficult it must have been for Kim during my over year-long rehab.

She wasn’t the only victim either.  Because I was a cop at the time, I had good friends on the rescue squad and was very tight with most of the cops on my PD.  They were the ones that had to pick me up and worry about me.  My Lieutenant at the time said seeing me there was the most difficult scene he had ever handled.

So if you you ride without protective gear perhaps this article will give you another viewpoint.  You aren’t really the victim, the people that care about you are.  Yes, you should have the right to choose, but perhaps now you have some thoughts to help you choose.

BTW, this article was spawned when I went back to an old ADVRider thread “Watching Your Significant Other Crash” I started back in 2009 shortly after Kim fell off.  There are some pretty interesting comments that you might want to see.  Thanks for reading this.  I feel better now.