Eicher Motors, the parent of Royal Enfield is applying for two new trademarks.  According to Indian Autos Blog, the Chennai-based motorcycle manufacturer wants to trademark the model names “Sherpa” and “Hunter”.

The Sherpa name is not new to Royal Enfield.  It appeared in the 1960s.  But the Hunter is an all-new name for the brand.

Now, the question is whether these two new trademarks are for brand new motorcycles or versions of existing bikes.  Or, could the trademark applications merely be a placeholder for the future?  There’s a bunch of conjecture out there, but nothing firm. With Royal Enfield finalizing its product lineup to meet the new BSVI emission standards for 2020, there’s no clear evidence of how the nameplates will be used.

An extract of Royal Enfield’s (Eicher Motors) trademark application for the Sherpa.

But Royal Enfield’s CEO Vinod Darsari has been clear that the brand wants to grow.  To do so, it has launched its new Royal Enfield 2.0 business strategy.  This strategy has 4 key points.  The first point is “expanding product range”.  How do you expand your product range?  You build new motorcycle models, that’s how.

Even more to the point, Darsari blamed Royal Enfield’s recent sales slump on a lack of new products as well as India’s economic downturns.  And, it appears that Royal Enfield is taking its new Royal Enfield 2.0 business strategy seriously. 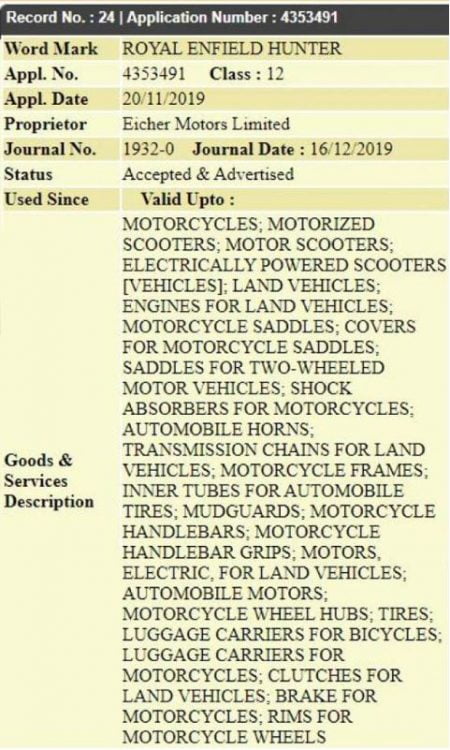 An extract of Royal Enfield’s (Eicher Motors) trademark application for the Hunter.

Recently, Royal Enfiled launched two new entry-level variants of current machines.  Bikes such as the Bullet X and Classic recently made it into Royal Enfield’s product lineup.  While these two machines are new to the product line, they are not new models.

So the question as to whether the “Sherpa” and “Hunter” will become revisions to existing models or new machines remains unanswered.  But rehashing existing models does not create the same buzz as an entirely new model.  So it will be interesting to see how committed Darsari is to bring new models to market and what Royal Enfield has up its sleeve for 2020.