Sometimes I just don’t understand the universe.  The reason why things happen the way they do often leave me asking, “but why”?  I found myself asking “but why” again when I got news of Sid Moore’s passing.  If you don’t know Sid by his real name, you probably better know him as ADVRider inmate Wxwax.  Sid was one of ADVRider’s most prolific commenters with over 100,000 posts to his name.  In fact, he was the fourth highest poster on ADVRider.

When I found out, I thought What?  That just can’t be right.  I just covered the AIM Expo with him in October; eating breakfast and dinner with him.  I just chatted with him online a few days ago.  And now, he’s gone.  It’s not fair.  Sid had a lot more to give, I think. 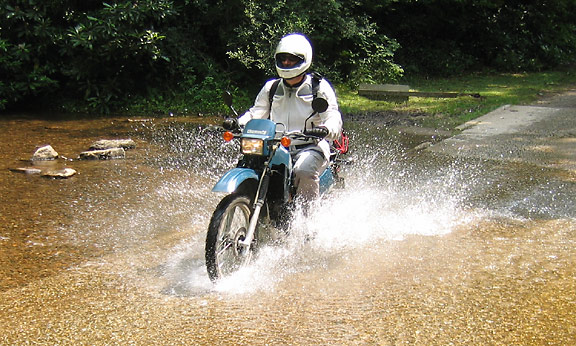 Truthfully, I didn’t know Sid as well as I wish I had.  We met because of ADVRider as writers for ADVRider.com’s new front page.  But in the time I knew Sid, I think I learned a few things about him.  Before we met in person, I knew he had over 100,000 posts on ADVRider.  No matter how you cut it, that’s a lot of posts.

I think his post count said a lot about him.  He was a thoughtful guy.  Before he would reply, there was sometimes a pause where you knew the gears were turning in his head.  Before he said anything further, that information had to be digested and reviewed.  Only then did the response come.

Even if he didn’t agree with you, his responses were level headed and gracious, never once did he utter a word that wouldn’t be said by a gentleman.  That’s it, Sid was a gentleman in the best sense of the word.

Sid had a background in television news and documentary programming.  I think he really loved those jobs.  But I tend to think that television likely misses him more.

You may or may not know that Sid also wrote for SBNation.  There, he covered soccer (football in the rest of the world).  He was a steadfast Chelsea supporter.

For fun, he rode bikes and was a talented photographer.  I’m going to miss Sid, I still can’t believe that he’s gone.  And ADVRider is a little poorer for it.

You probably know Sid better than I did, so if you’d like to add something about Sid, please feel free to put it in the comments below.

I am still getting over the shock that my friend Sid is no longer with us after suffering a sudden and unexpected heart attack.

Sid and I communicated by text, phone or video chat six days a week. When my phone pings I glance at it expecting to see a message from Sid. Then I remember he is with us no more.

Sid was a very intelligent, thoughtful and patient man. When I knew nothing about Adventure Riding, Sid patiently explained anything I needed to know. He was also talented and passionate. Sid was a wonderful writer, both on the subjects of Adventure Motorcycling and on football (soccer), especially the Chelsea Football Club.

Sid has been part of ADVrider since the beginning. He posted a staggering 103,950 posts on ADVrider since July 2001. He averaged 16 posts per day for over 17 years! That is quite an accomplishment!

I will greatly miss Sid. My thoughts are with family as they deal with their loss.