You don’t need to focus down quite as far as Bill Blake did in Auguries of Innocence, but the Canaries will let you see – and ride! – the world in half a dozen small islands. Scattered through the Atlantic off the coast of Africa but officially a part of Spain, they might as well be a suburb of London for the number of British people who live there or visit the place on vacation. But because most of them just commute between their semi-detached villas and the umbrella-covered beaches where they can burn their pale skins to a crisp, you’ll mainly see them at the airport as you and they arrive or leave.

The people you are likely to mix with are the Spanish immigrants who date back rather further than the Brits. Despised by the original inhabitants (“they paint their houses in colours,” one local told me on Las Palmas) but outnumbering them significantly, these people operate most of the businesses including the motorcycle rental shops. Be prepared for some hilarity if you’re American and speak ‘Spanish’; you don’t really, you speak Mexican. Mind you, they think it’s just as funny if you speak Castilian as I do (a little). 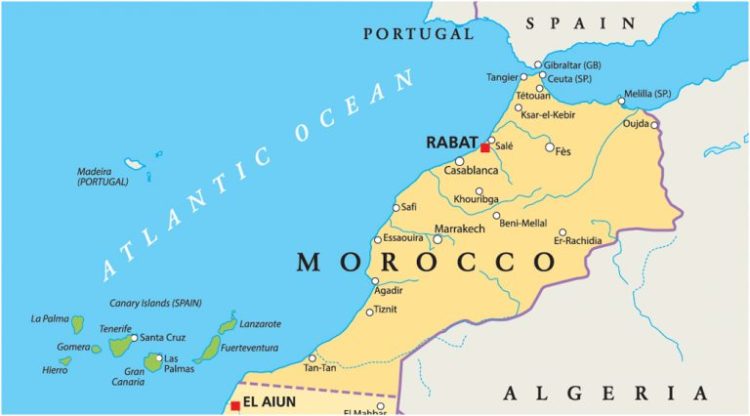 The islands were not named for birds but for their ubiquitous dogs – Les Canares.

There are actually seven major islands, and unless you’re fortunate enough to be attending a BMW Motorrad launch, in which case you will find yourself on Lanzarote, you will most likely land on the biggest island, Tenerife. Tourism is such a big business here that the island gets ten times its population of 900,000 in tourists every year, and there are two international airports. But here’s the thing: the vast majority of the visitors have no idea that Tenerife and the other major islands offer the whole motorcycling world in miniature.

I’ve ridden four of the islands, and even that was enough to provide samples of pretty much all the riding available on the planet because they are so different. They were all created the same way, but not at the same time: like the Hawaiian islands they owe their existence to a ‘hot spot’ over which the continental plate moves; so they came into being one after the other, and they have had different lengths of time to weather and wear down.

Two of them are still visibly ‘hot’; Tenerife with its giant volcano Mount Teide, and Lanzarote with its magma-heated barbecue. Seriously. I’ve cooked a steak over it myself. But let’s take things in order. 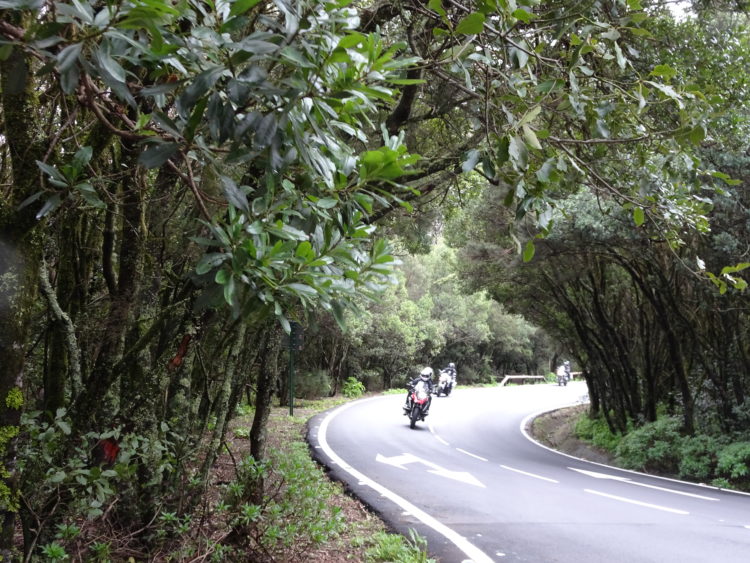 La Gomera gets a lot of rain, so it looks more like Borneo than a Pacific island.

The most westerly island I’ve been fortunate enough to ride is La Gomera. In essence, this is a volcanic plug, flat on top and with separate small flats at sea level. You arrive at one of these when you catch the ferry over from Tenerife, and the first thing you have to do is climb to the plateau on top of the plug. That means hairpins and some outstanding riding. Once on top you find yourself in a rather unexpected rainforest. The road breaks out of this every now and then to offer views of ridges and peaks of solidified magma.

To reach one of the other flats it’s a repetition of the ride up – just heading down, of course – which means more amazing corners. The place we visited on the Edelweiss tour I took was a small, mildly touristy beach community. Highlights were the food, with options of ‘Arab’ (Moroccan), Spanish and local food, and some outstandingly well-made souvenirs. I bought Mrs Bear a silver ring made as a Moebius strip with the Lord’s Prayer engraved on it. 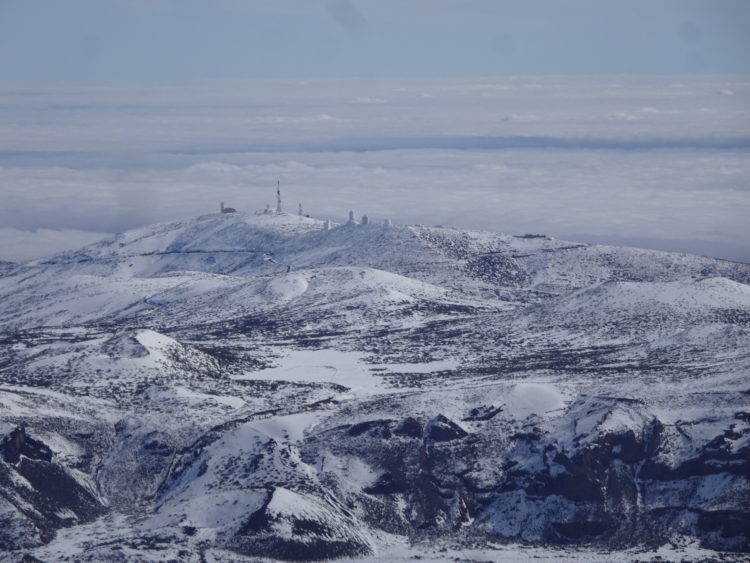 Back on Tenerife you have another series of hairpins and other bends to get you up to the caldera of Mount Teide. This is an active volcano, but most of its mass has been eroded away. It’s still high enough to have snow and ice on the edges of its caldera as well as its own peak. Riding down again on its northern side you enter a semi-tropical landscape where you can see the famous dragon’s blood trees. 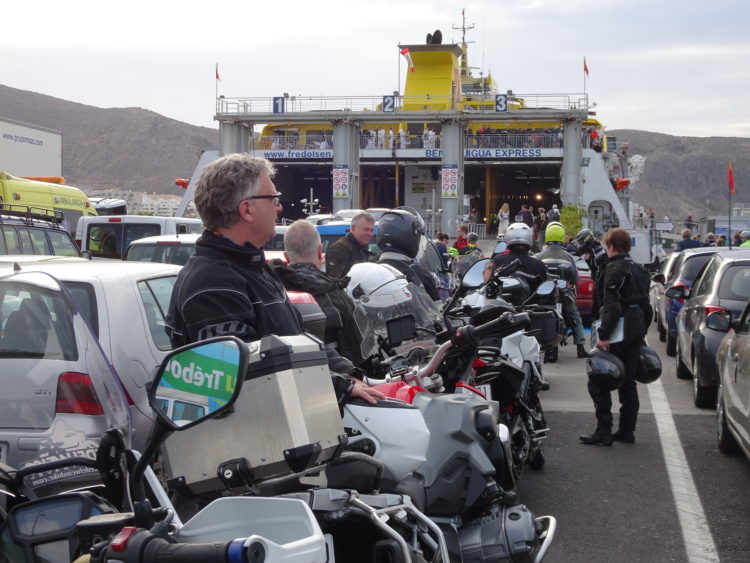 Some of the many ferries, like this one, come from Incat in Tasmania.

A ferry ride across to Gran Canaria takes you to a more European climate and landscape with a mixture of flat and mountainous territory. There are many narrow, twisty tracks worth exploring, especially along the craggy coastline. We took nearly two full days to explore Gran Canaria and we didn’t see the same sight twice. 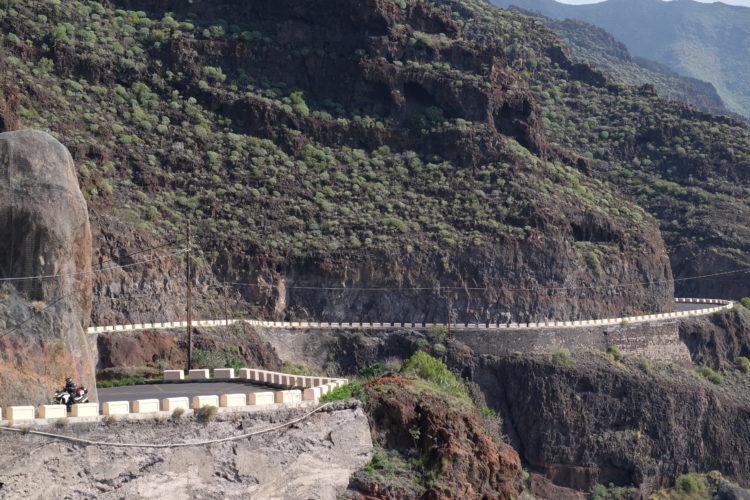 There are almost more cliffside roads in the Canaries than any other kind.

On to Lanzarote. It offers a full-on bit of desert, desert mountains, precipitous high cliffs with roads hugging the top and a whole national park made up of hard, sharp, black, shattered lava with roads winding through it. This is where the barbecue is – a grille over a vent that goes right down to the magma layer under the islands. It’s quite a thrill cooking on it. 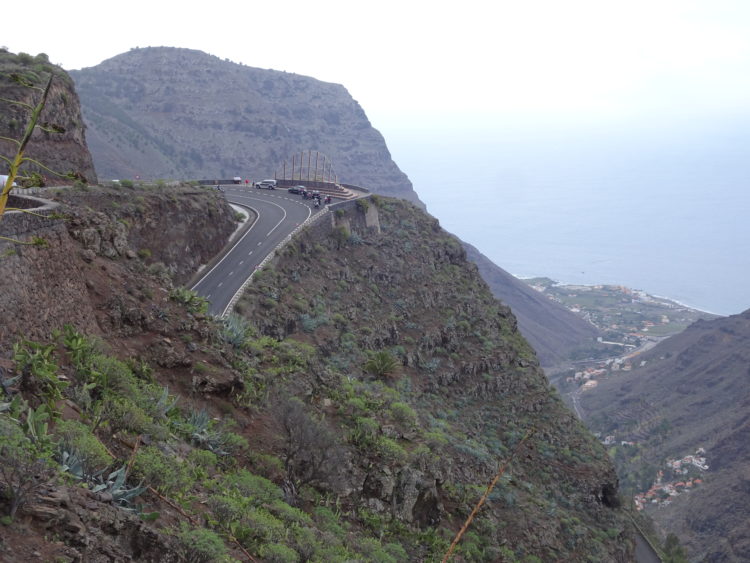 The government of the Canaries is quite wealthy so it can afford to build good roads.

From jungle to desert, from tropics to temperate climes and ice fields, from cracked, cold magma to verdant fields the Canaries offer everything the rest of the world does. And all of it is accessible over some of the most wonderful mountain roads. You can rent a bike or go on a tour like I did, or bring your own bike by sea from Spain or by air. 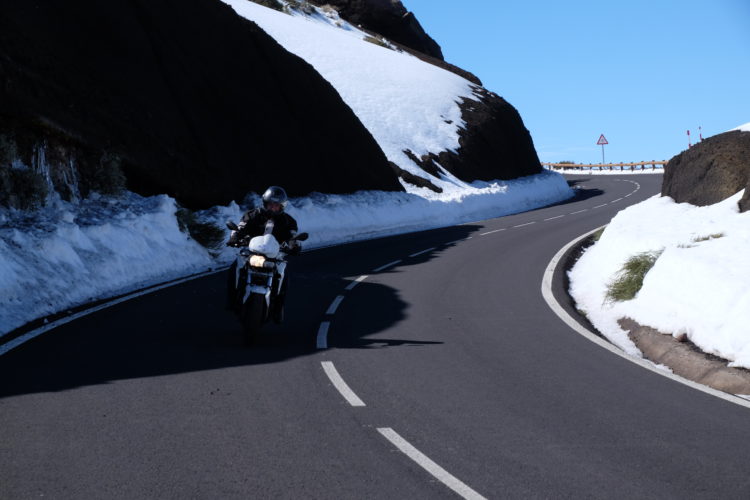 Cold? Don’t worry, just 17 hairpins down and you’ll be in tropical weather.

My thanks to Edelweiss Bike Travel (www.edelweissbike.com) for making it possible for me to ride Tenerife, La Gomera and Gran Canaria.