One of the scariest episodes of my solo travels happened in Bolivia almost six years ago. I was traveling South towards Uyuni on my tiny, overloaded, underpowered Chinese motorcycle. I didn’t know that the pavement would end, and I’d be left to paddle and waddle along sandy desert tracks, corrugated dirt trails, and loose gravel. This was my first motorcycle journey, I’d learned to ride a bike just a month ago, and was a complete newbie to this whole adventure riding business.

Because this was my first time off-road, too, I was traveling slowly: not more than 40 kilometers an hour, sometimes much less. As I left the last village behind, the tracks lead me across the vast, wild expanse of the Bolivian Altiplano – the high plains of the Andes. The sun beat down and the earth seemed to stay still: there were no signs of life in this Moon-like landscape. There were no villages, no animal fences, no sign of human activity. Making my way slowly south, I felt like the first human on Earth, giddy with the sense of adventure. 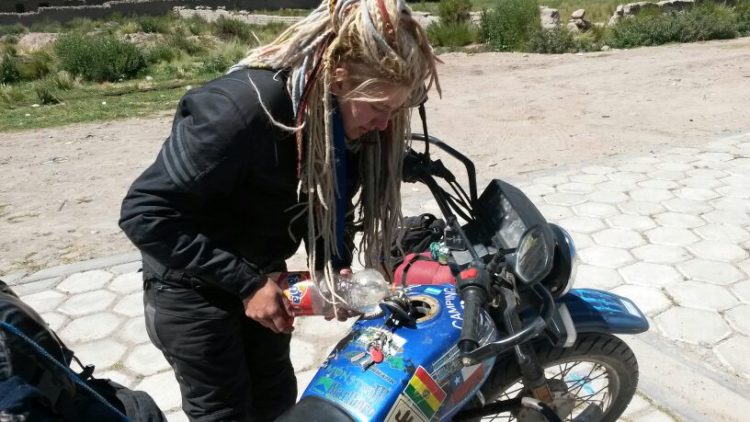 Me and my trusty steed Blinkin, circa 2013. Photo: personal archive

Then, I spotted a truck in my rearview mirror. At first, I felt relief: a truck behind me meant I wasn’t alone any longer, I wasn’t lost, this track was, after all, used by other people. But the truck was behaving oddly. Instead of overtaking me and speeding off – it was much steadier and faster than me – it stayed behind me. Confused, I slowed down even more, veering towards the edge of the track so the truck could pass. It didn’t; it stayed right behind me.

Feeling uneasy, I tried speeding up in the hopes of losing it, but the truck matched my pace. Ten, fifteen minutes passed by, me on my little bike scurrying along the track, the truck following. I tried slowing down again, waving my hand for the truck to pass, but it stayed behind. It was getting weird, and not in a good way.

I suddenly realized how small and unprepared I was, how big this place was, how sparsely populated, and how remote. Even if I called for help, there was no one to hear it, and there probably was no phone service in this high desert. I wasn’t sure how far I was from Uyuni, the next town. I wasn’t sure of anything anymore.

Eventually, I decided to just stop and pretend I was fixing something on the bike, hoping that the truck would finally pass and leave me alone. To hell with it, I’d had enough of the cat and mouse game.

I stopped at the side of the track, and the truck, and old, creaky Bolivian diesel monster, roared by — then hit the brakes. My heart jumped to my throat. Why was the truck stopping? Why was the driver getting out of the cabin and walking towards me?

My mind raced, trying to decide what to do. Should I jump back on the bike and make a run for it? I wouldn’t get very far, though, and a truck would easily knock me off anyway. There was no point. I had to stand my ground and find out what was going on.

“I noticed your backpack was about to fall off your bike, so I thought I’d offer you this,” the driver, a stocky Bolivian man in overalls, said to me offering a piece of sturdy rubber rope. “I thought maybe this would help? My horn is broken and I had no way of getting your attention, so I figured I’d just follow until you stopped,” the man smiled.

He was right. My backpack, which I had strapped on the bike’s tail using a few tatty strings was dangling off, almost hitting my rear tire. The man helped me fix it to the bike securely with the piece of rubber rope he’d offered, told me Uyuni wasn’t too far now, wished me a safe journey, and took off. 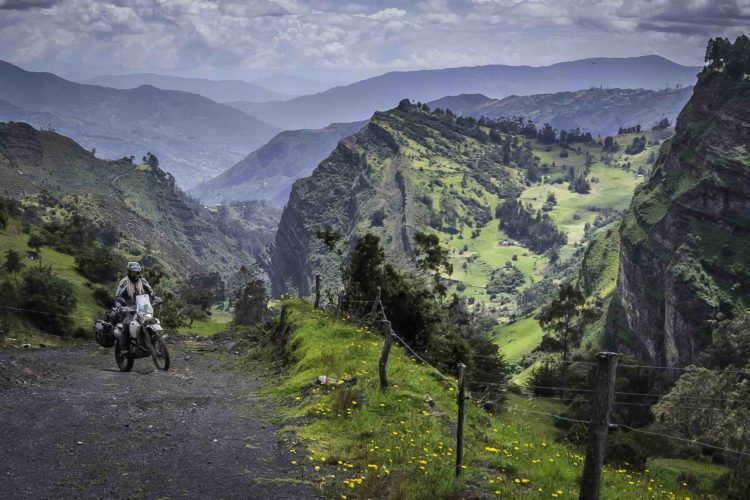 All is well that ends well, and I felt silly afterwards about thinking the worst when the kind truck driver simply wanted to help me. However, in that one uncertain moment, all the warnings and all the skepticism about solo travel had flooded my mind. I lost count of how many times people have told me it was dangerous, reckless, or even suicidal to travel alone on a bike, especially in such “scary” places as South America. Sometimes, they’d say things “You’re just asking to get killed/robbed/assaulted,” and the way they said those things made me wonder: if something bad really happened to me, these same people would probably say, “Well, she was asking for it” with a sneer.

As Kylie has already so wonderfully expressed her thoughts on solo travel, most naysayers simply project their own fears on solo travelers. And yes, bad things can happen on the road, but they can also happen at home. But there is risk, and then there is recklessness, and I know that most solo riders are more than aware of the balance between the two.

There’s one more weird thing that happens when you travel solo: little by little, you realize that while you do not have what is traditionally perceived “safety” – safety of your home, familiar routes, familiar city – you now possess a different, stronger kind of safety. Safety in knowing that whatever may come, you’ll figure it out. Whatever happens, you’ll find a solution, one way or another. If the sky falls, you’ll build a shelter, even if you don’t know how yet. And this inner sense of security, not from fanciful arrogance or hubris but from simply having been through enough to know that there is always a way, for me, is the most precious outcome of solo travel. 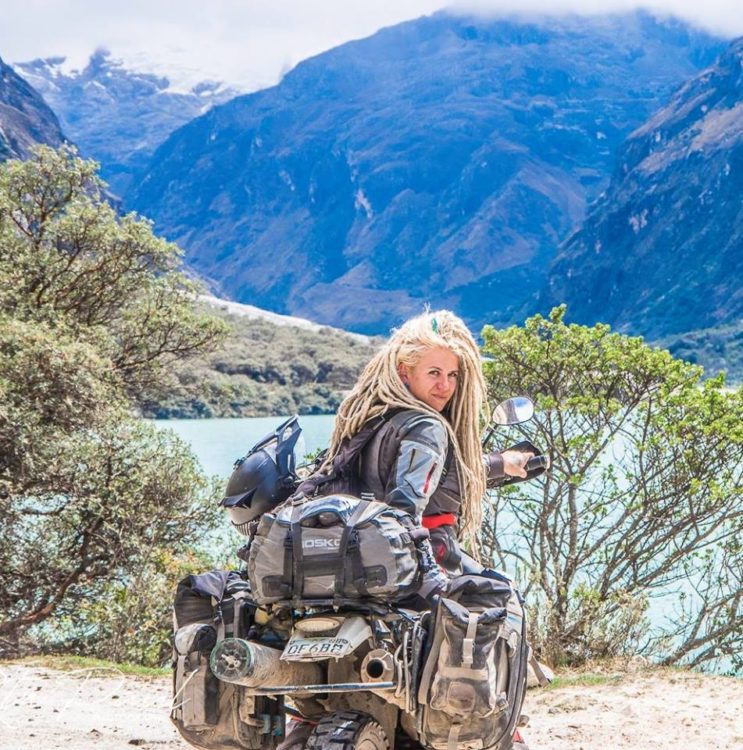 Solo travel can be a gift. Photo: rtwPaul