The top end of Borneo has spectacular riding both on and off road, plus so much more

You may never have heard of Sabah, but it’s the place where you can climb the highest mountain in Malaysia (it only takes two days), meet Orangutans face to furry face, visit the Floating Mosque and soak in a natural spa. But best of all, you can ride motorcycles either on the wonderful network of sealed roads or remote jungle trails in the Crocker Range. Oh, and they also have the world’s biggest – and smelliest – flower waiting for you.

Forget the flower for the moment; taking a sniff of the Rafflesia, more commonly known as the Rotting Flesh Flower, is optional. 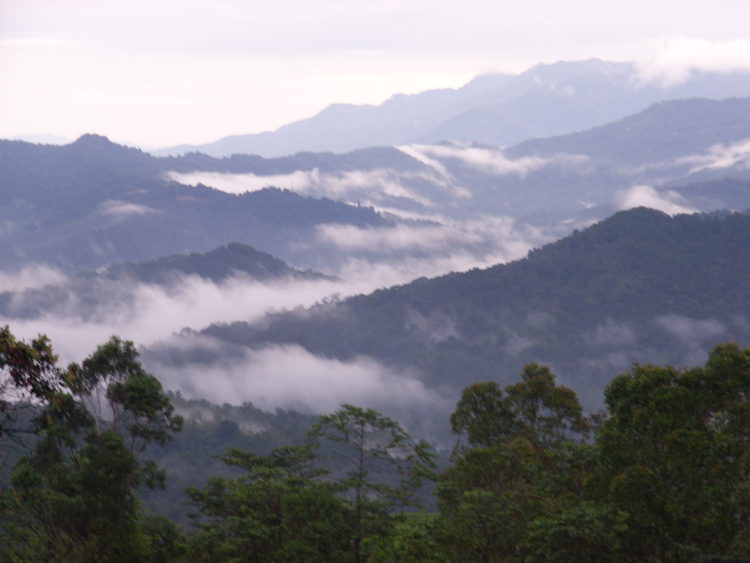 The Crocker Range is remarkably untouched by modern life and pollution. 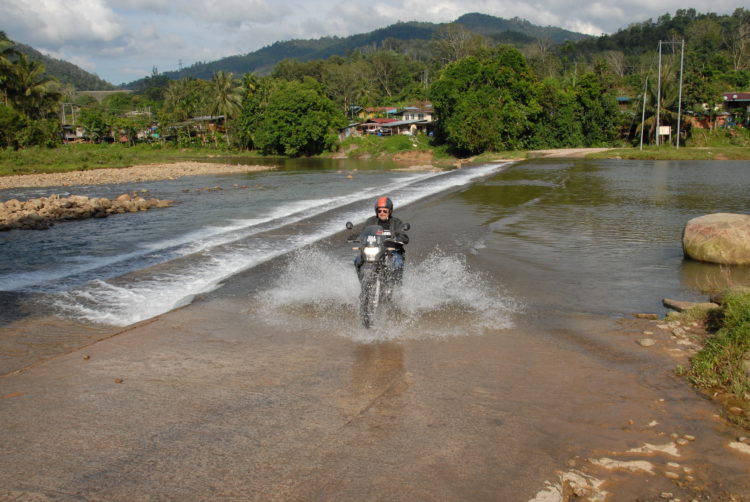 Despite the big spend on roads, Sabah still has a lot of river crossings where you can wash your bike…

I’ve taken two bike trips through Sabah, both times with my friend Bryan Wade, better known as Wadie. He’s a five times British Motocross champion, the only rider ever to win all three race categories – 125, 250 and 500cc. Fortunately he takes pity on me and keeps to Sabah’s beautiful roads when I’m riding with him, but his Borneo Biking Adventures will also take you on some remarkable jungle tracks (BorneoBikingAdventures.com) if you prefer something more challenging. Better yet, Wadie has always got his customers out again…

Enough free advertising and no, I don’t get a kickback for the people who decide to ride with or rent from him. But I do recommend him. While it is possible to bring your own bike to Sabah, it is not necessarily easy. Theoretically a Carnet de Passage is required, although as with so many things in Malaysia, enforcement is patchy; but you can’t ride to Sabah. You literally have to ship your bike, either from Malaysia or Singapore. Possibly you could also ship from Indonesia or the Philippines, but that’s a hassle I would definitely avoid.

At least Australians can get a 90 day tourist visa on arrival; if you are unfortunate enough to be of another nationality, check before going.

Is Sabah worth a visit? 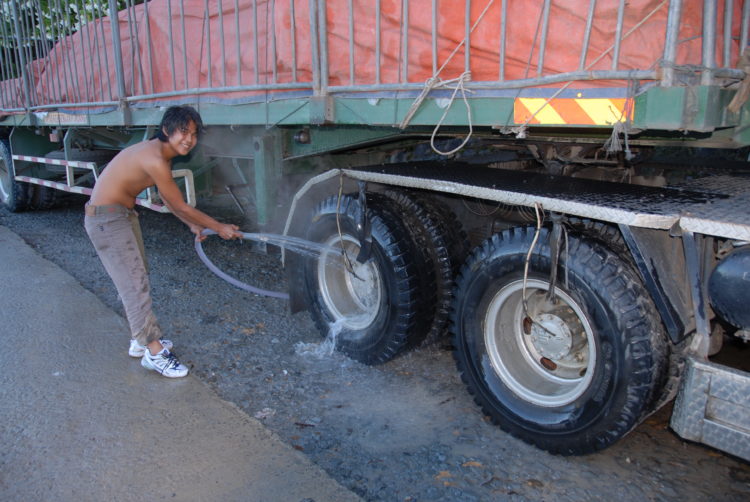 Cool it man! Trucks have permanent water feeds to the wheels to stop the brakes from overheating.

Oh yes, and especially for a motorcyclist. Sabah is a wealthy place due to its oil reserves, and a lot of the money is spent on roads. Also, unlike many developing countries, Sabah provides sealed roads even on the steepest slopes of its mountainous spine. Traffic on most of these roads is sparse; while the capital Kota Kinabalu has the usual insane South Asian traffic tangles you only need to get a little way out of city limits before the road is just about all yours. There’s the occasional truck as well as the ubiquitous bemos, minibuses that serve as public transport, and not much more.

The best rides are across the Crocker Range with hairpin bends and more open corners that inspire fairly, er, enthusiastic riding. Some words of warning here. Dogs are likely to be wandering across the road or asleep on its warm bitumen anywhere near a village; the inviting-looking ‘grassy’ verge of the road is often axle-deep mud under its cover of vegetation; and most mountain roads have foot-deep square concrete drains which are best avoided. At all costs, really. 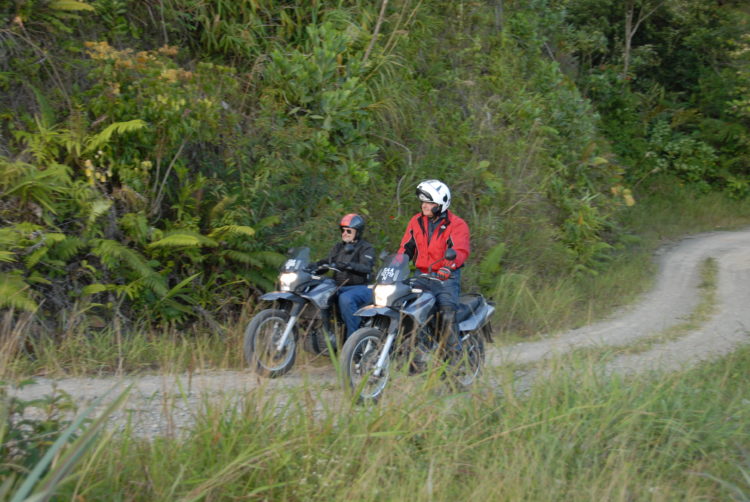 Sabah has a lot of dirt tracks both through the plantations and into the forest. That’s where they turn to trails.

Some of the back roads are less than perfect, and every now and then a landslip will take a section of road down the hillside. This is inevitable in a landscape that is as young as Sabah’s. While granite underlies the mountains, the surface layer of the land is often just earth. Be prepared for the occasional somewhat muddy detour past a slip; the roads are fixed quickly, but not instantly.

Small towns, mainly in the interior, offer cafés and restaurants and the inevitable markets where you can find some of the local specialties, including freshly killed python. I’ve eaten one python steak and of course it tastes like chicken. No, seriously, both in texture and flavor it resembles crocodile. The restaurants offer considerably more standard dishes. Food quality and hygiene are both very high, and Sabah is one place where you don’t need to worry about the health of your intestinal tract. The usual drink is tea, but you will have no problem getting a beer. Unlike some of the more fundamentalist Muslim parts of peninsular Malaysia, Sabah has many Catholic citizens – and who can imagine a Catholic country without alcohol? 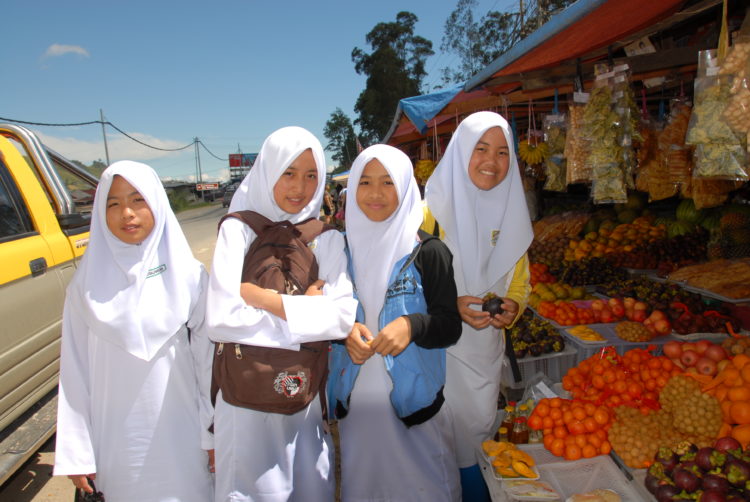 The people, like this bunch of schoolgirls, are friendly and the food at the markets is fresh and healthy. Including the snakes.

It’s unfortunate that some of Sabah’s rubber plantations as well as jungle are being razed and planted with oil palms. The palms are more profitable, but like any monoculture they’re bad for the wildlife. No chance of eliminating the Rotting Flesh Flower, though, or its almost equally smelly pal the (edible) durian.