If the latest round of spy shots can be trusted, then we’ve got interesting news on Aprilia. It seems the Italian brand is working on a new 250-class adventure bike, probably aimed at the Asian market.

With the ongoing coronavirus pandemic hitting motorcycle production in most countries, you’d think the development process for new bikes would have stalled completely. The reality is, it’s smallish teams that work on these projects, and even if the big factories have closed down, much of the work can be done from home or in small, off-site locations. And, thanks to inter-continental deals between Euro OEMs and Asian manufacturers, you  might see a manufacturer’s plants closed down in one country, but remaining open in another.

Whatever the deal is, we’re seeing photos of a new Aprilia 250 adventure bike now. MoreBikes ran them earlier this month, and supposedly found them on this Chinese website. The photo itself doesn’t tip much, just the bike and the potential name: It’s likely to be called the Terra 250. 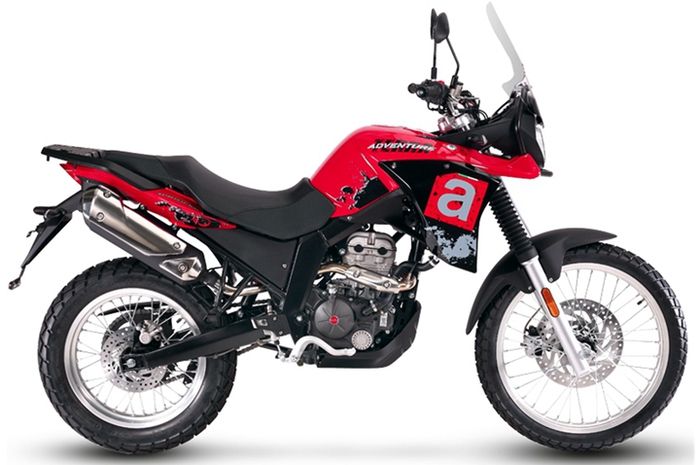 Aprilia doesn’t actually build the current Terra 150 model itself; it’s made in China and sold in Asia under Aprilia’s brand, as well as Derbi and CFMoto. This is all part of the great meeting of the Asian and Euro manufacturers, as just about everybody in Europe is selling machines that are made in China or India now. It’s a rugged-looking machine, but expensive in the Asian markets when compared to other Chinese-branded or made-in-India bikes.

Aprilia hasn’t confirmed the new machine’s existence, or released specs. The spy shots appear to have been snapped off a factory floor, so no doubt we will see the bike soon, if the rumours are true … and no doubt we will not see it coming to North America, and probably not Europe.