According to patent images uncovered overseas, Honda appears to be moving to twin-spark heads for the CRF250L and CRF250 Rally models, as long as the sketches are legit.

The drawings (we spotted them on MoreBikes) show Honda’s CRF250 engine getting a new head with provision for two spark plugs, instead of one.

The dual-spark design isn’t unheard of (Suzuki has used this trick for years on the DR650), but it’s rare on small-capacity bikes. It’s generally used to better burn all the fuel in the combustion chamber, so p’raps Honda’s looking at trying to jam the single-cylinder CRF250L through Euro5 regulations and using every ploy in the playbook. 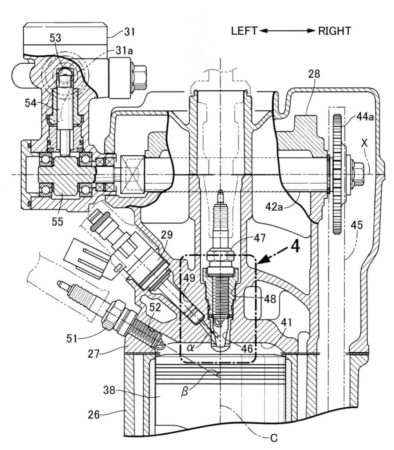 Does that look like a direct injection system to you? Photo: MoreBikes

The design patents also indicate Honda’s putting a new mechanical fuel injection system on the CRF250L for 2020, or so it appears. This could be intended to keep costs down? Honda’s CEF250L relied heavily on the old CBR250 design, but now that’s evolved into the CBR300, it’s possible we’ll see more changes between the bikes, with this sort of thing being an example.

There’s also conjecture that the CRF250L will get gasoline direct injection, which would be a real surprise for a motorcycle at this price point, considering companies have talked about including it on much more expensive models for years, but never actually done so. This could be another reason for the dual spark system, to clean up unburnt fuel.

Sadly, there’s still no talk of Honda putting CBR300’s engine into the CRF250L, which is a no-brainer to most fans of the bike, as many DIY enthusiasts have already done this, with no difficulty as long as they stick to OEM parts.