I read an interesting article recently about people that drive luxury brand cars.  The hypothesis was that males operating luxury “high-status” cars are more prone to be inconsiderate/dangerous drivers.  The interesting thing is that the hypothesis was based on a study, not just speculation.

And the article caused me to think.  Did this hypothesis seem correct?  In the likely thousands of times I have been aggressively passed, cutoff, or ignored by a car, was it a luxury high-status brand that did it?  And as I thought about it, I began to think there might be some truth to the idea.

Results based on a study

So what is there to back up the article’s hypothesis?  It’s research from the University of Helsinki social psychology professor Jan-Erik Lönnqvist.  Lönnqvist made the initial observation that inconsiderate/dangerous drivers often drove luxury high-status cars.

“I had noticed that the ones most likely to run a red light, not give way to pedestrians and generally drive recklessly and too fast were often the ones driving fast German cars.”

Lönnqvist said that previous research has confirmed that drivers of expensive cars are more likely to break traffic regulations.  Hmm… interesting.  And, that “…the phenomenon has been explained with the common assumption that wealth has a corrupting effect on people, resulting, for example, in high-status consumption and unethical behavior in various situations.”

Lönnqvist’s approach to researching this question is different.  His study evaluates whether specific types of people are drawn to high-status cars regardless of their financial assets and a tendency to break traffic laws.

So under a grant from the Academy of Finland, Lönnqvist and his team set out to find an answer.  The study’s researchers evaluated 1892 Finnish drivers.  The drivers were asked questions about their car, consumption (buying) habits, wealth, and a host of questions exploring personality traits.

The resultant answers were analyzed using the Five-Factor Model (FFM).  FFM is the most widely used framework for assessing personality traits.  It assesses characteristics in five key personality domains:

After the research, the researchers said the results were unambiguous.  “Self-centered men who are argumentative, stubborn, disagreeable, and unempathetic are much more likely to own a high-status car such as an Audi, BMW, or Mercedes.”

“These personality traits explain the desire to own high-status products, and the same traits also explain why such people break traffic regulations more frequently than others.” 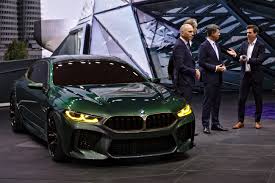 According to the results of the study, cars like BMW’s M8 are more likely to be driven by self-centered men. Photo credit: Wikimedia commons

Lönnqvist also pointed out that money is necessary to purchase high-status products, which is why wealthy people are more likely to drive high-status cars.

The professor went on to say:

“But we also found that those whose personality was deemed more disagreeable were more drawn to high-status cars. These are people who often see themselves as superior and are keen to display this to others.”

Lest you think that this is the end of the story and research, there’s more.  The study also found an unexpected result.  More than one personality type values high-status cars.  Conscientious people have a similar outlook on high-status cars.

People with a conscientious personality are as a rule, respectable, ambitious, reliable, and well-organized.  Lönnqvist explained their link to high-status cars:

“The link is presumably explained by the importance they attach to high quality.  All makes of car have a specific image, and by driving a reliable car they are sending out the message that they themselves are reliable.”

Interestingly, for conscientious people, the link to high-status cars is with both men and women.  The result is not the same for persons with self-centered personality traits.  In their case, only men had a connection to high-status cars.

Lönnqvist does not have a clear answer.  Why only self-centered men desire high-status cars is open.  One possible explanation is that cars do not have the same significance as status symbols to women.

There isn’t much research on the consumption of luxury products using the Five-Factor Model.  However, Lönnqvist thinks that additional research may lead to an increased understanding of the reasons driving this sort of consumption.

Lönnqvist went on to say:

It would be great if consumers had other, sustainable ways of showing their status rather than the superficial consumption of luxury goods that often has negative consequences. We are already seeing that driving an electric car is becoming something of a status symbol, whereas SUVs with their high emissions are no longer considered as cool.”

So what do you think of Lönnqvist’s research?  When you are out on your bike, are high-status vehicles more likely to be inconsiderate or endanger you?  Do you agree that luxury cars attract self-centered people?  Are those people less likely to follow traffic laws?  Do you think the same theory applies to motorcycle riders?