Here’s a quiz for you. The first electric vehicle I ever ‘drove’ or ‘rode’ was a Sinclair C5. This was essentially a plastic bathtub designed by Lotus Cars and mounted on three disc wheels. It was steered by a handlebar under your knees. No, seriously. Wikipedia has quite a good article about it if you don’t go back far enough to remember. Believe me, if you’d seen one you would remember it, never mind if you’d operated one. Okay, here we go.

1. The thought of tackling traffic in a Sinclair C5 was: a. Terrifying

2. Being seen by someone you knew while operating a Sinclair C5 was: a. Mortifying

3. The conclusion that a Sinclair C5 handled rather like a wheelbarrow full of walruses was: a. Perhaps not unavoidable but pretty close.

4. The probability of running out of battery power on a hill in a Sinclair C5 was: a. Inevitable

5. The anticipation of pedaling your Sinclair C5 home was: a. Paralyzing

If your answers were all a. you obviously know the Sinclair C5. What I’m trying to say here is that I came to this current test with some solid and well-entrenched prejudices against small motorcycle- or scooter-like electric vehicles.

Enter the Super Soco. Made in China and distributed by Australian company vmoto, the bike is considerably better-looking and more practical than Sir Clive Sinclair’s effort. The Super Soco TC MAX that I found waiting for me promised to at least not be embarrassing. That’s no mean claim: many electric bikes or scooters make it obvious that their designer has not come to terms with the alternate reality of the move from internal combustion. The TC doesn’t look like some kind of hybrid; it looks like a motorcycle, and yet is clearly an electric one. The lines are clean and the design flows smoothly, with a pleasant selection of colors and the rear ‘side covers’ in white to keep the back of the bike looking light.

On the subject of lights, they are all LED and quite bright. 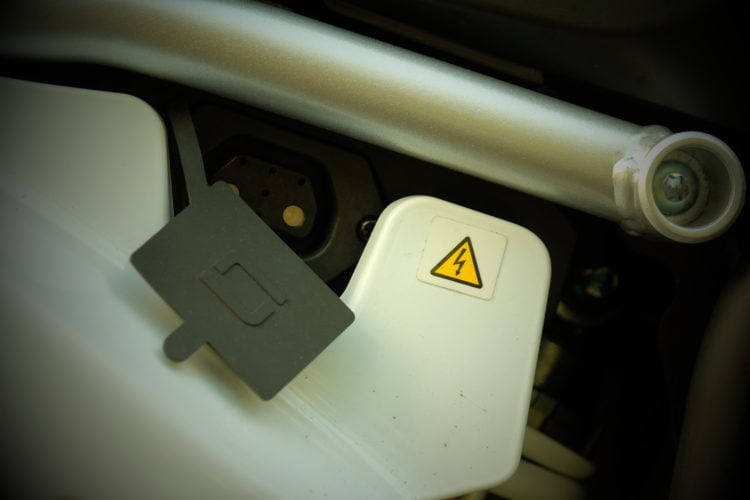 Unobtrusive recharging socket. You can carry the charger under the fake tank cover.

So far so good. Unplug the charger, pop the top of the fake fuel tank and insert charger and cables. This is useful, because it means you can charge the TC from any power point, anywhere. Climb aboard, press ‘unlock’ on the fob and the starter button lights up. Press that and the LCD instruments come on, complete with the word ‘READY’ in green. This, and the arrows flashing to show that the blinkers are on, could be a bit brighter. The other controls are the handlebar lever actuated brakes, just like a scooter’s. A kill switch on the right handlebar cluster doesn’t seem to do anything, but maybe that’s just me. 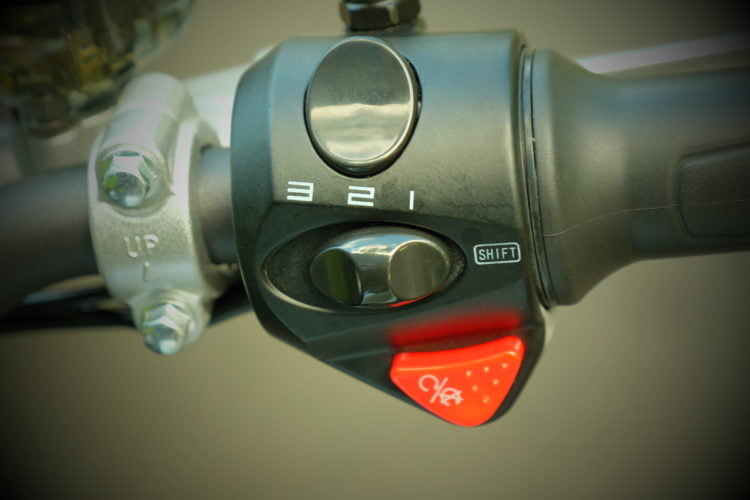 There are three markings above the sliding switch on the right of the handlebar, economically marked 1, 2 and 3. They indicate the power level you’re accessing from 1 which takes you to about 60km/h, to 2 which lets you ride at 80km/h and finally 3 which is good for 100km/h or a little more. In ascending order these levels increase the drain on the battery, and that’s shown on the instruments which also give you an estimate of the distance remaining. Unlike some other electric vehicles, the TC’s are pretty accurate as long as there aren’t any serious hills. There does not seem to be any power recovery from braking. 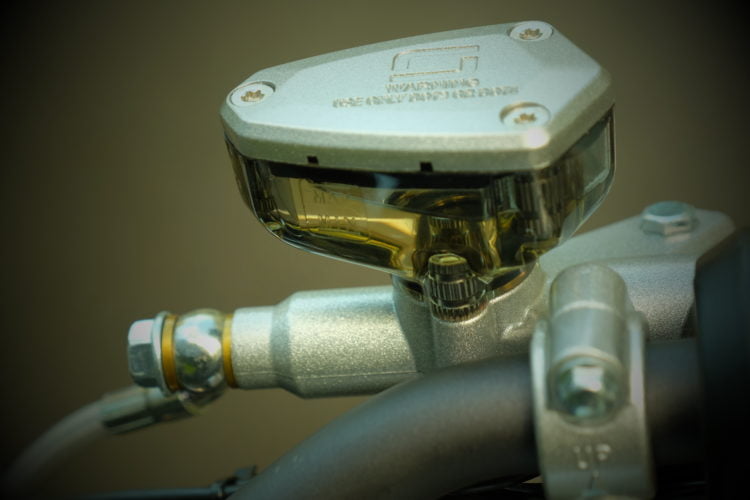 Standard of finish is quite good and design is endearing.

The 3000 Watt hub motor from Bosch gets you off the lights quite quickly when you’re on power level 3, but it’s no neck snapper. I know that electric motors produce full torque from zero revs, some 150Nm in this case, but the motor still has to accelerate the mass of the bike and (in my case not immaterial) rider. Fitted with both batteries and run at power level 1, the Super Soco should take you some 160km before recharge. It rolls on cast 17” wheels shod with Cordial (brand, not attitude) tyres. The brochure does not specify the TC’s weight, but it’s pretty light and that helps it to handle cordially (attitude, not brand). It would be nice if there was a neutral ‘gear’ because you get odd pulsations if you try to roll the bike backward; there are also some odd pulsations when you’re off the throttle. No biggie. 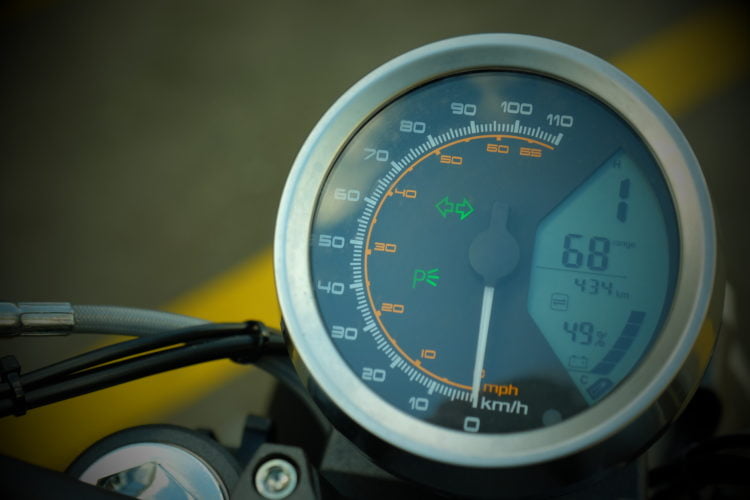 Among other things, the instruments keep track of your range.

I spent a few days punting the Super Soco TC MAX around town, on both commuting and shopping duties. In the former case I wore a courier bag, while in the latter I strapped a Kuryakyn rack bag to the short piece of pillion seat that remained behind me. Both options worked fine with the bike quite able to handle the extra weight, but do not plan to give Arnold Schwarzenegger a lift on a TC.  That pillion seat is intended more for Keira Knightley. Fortunately, there is a grab bar.

The Super Soco TC MAX will probably be available in the US by the time you read this. It will sell for US$5328 for the spoked wheel model I rode, a little less for cast wheels. That ain’t hay, of course.

But it turned out to be a lot of fun, not only to ride but also when bystanders admired it. For around-town transport it would be hard to beat if you don’t weigh much more than my 210 pounds and stay off the freeway. Otherwise it is truly practical, and as long as you plug it in at night you should not have any problems with its range. And it will save you wearing out your adventure bike.