The Super73 isn’t your daddy’s electric bike. Or maybe it is?

Ask people who grew up in the 1970s and 1980s about their first motorcycle, and many of them will have their eyes glaze over as they talk about the wondrous minibikes that powered the two-wheeled revolution in those days. All the big players, and plenty of smaller outfits as well, built small-capacity motorcycles that were intended for low-speed ripping about in the backyard, or at the cottage. Honda’s monkey bikes might be the most famous, providing the entry for many into the world of motorcycling.

Well, thanks to regulations, the rising cost of motorcycles, changing budget priorities and probably 50 other factors, minibikes just aren’t as popular anymore. But, Super73 is aiming to change that.

California-based Super73 is now shipping its S1 electric minibike, a stripped-down machine that bears many similarities to the minibikes of old. Technically, speaking, it’s a moped, as it has both a motor and pedals, and it seems intended to be a pedal-assisted bike, like most e-bikes. It just happens to look a little different.

According to the site’s official blurb:

The SUPER73-S1 is a high performance, street legal and long-range electric bike with no license or registration required. It’s a unique commuter vehicle or weekend cruiser complete with a high output LED headlight, rear brake light, and sturdy cargo rack.

It is designed for rider comfort, with its natural riding position and plush motorcycle bench seat. It’s designed to fit riders from 4’9” to 6’9” (145cm to 206cm) and features 4″ wide fat tires to ensure a smooth ride.

Its compact size means you can ride and park anywhere a bicycle can. Plus, it easily fits in a car or train for your daily commute.

Well, looking at it closely, it’s unlikely a 6-foot-nine rider is going to be bragging about all-day comfort. And, seeing as the battery is super-small, calling it a “long-range” electric bike is also a bit cheeky. Even Super73 themselves admit, further down the page, that range is about 35-40 miles on full battery charge, at 20 mph, and “The maximum range of a full charge depends on many variables such as age of battery, slope, and type of terrain, rider weight, speed, outside temperature, riding style, pedaling input, and tire pressure.”

The pedal assist feature can be set to one of three different power output levels, and if your battery dies (it’s a removable 48V 14.5 Ah, assembled from Panasonic cells), then you can pedal as you would a normal bicycle. The battery powers a 500-watt nominal, 1000-watt rear hub motor 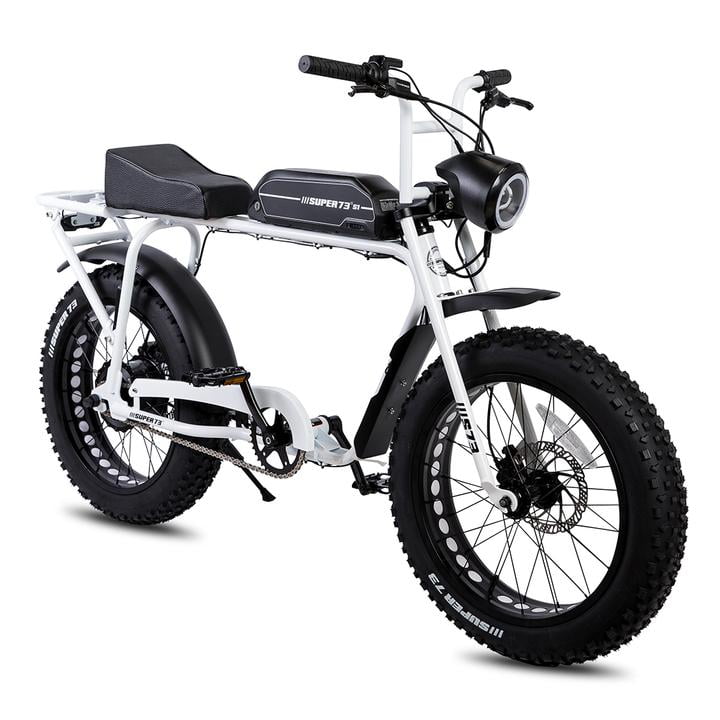 The S1 is easily transported in a car, if you want to head out to the cottage for the weekend. Photo: Super73

It’s highly interesting to see this machine, because while it’s an e-bike and not a full electric motorcycle, it appears to be an effort to move towards the same ideas that worked so well for minibikes in the past: minimal offroad capability, groovy styling, and the ability to be easily transported to other locations. And the price, well it’s not super-cheap, but it’s much less than the higher-end e-bikes, at $2,200 US, with free shipping currently. Visit the Super73 website for more deets.