For the past two years, I rode my Suzuki DR650 across some of the BDRs and parts of the Trans America Trail, Newfoundland & Labrador, Mexico, Guatemala, Cuba, Colombia, Ecuador, Peru, and Chile. I tried to stick to off road routes as much as possible and try the bike on all sorts of terrain, from Rocky Mountain passes in Colorado to the Andean glacier trails in Colombia and Peru. It has seen all kinds of weather, daily distances, water crossings (including one in the front-end loader of an excavator), highway miles, and a lengthy sea voyage from Mexico to Cuba and Colombia.

The bike is still going strong – so strong in fact that I intend to take it to the Hellas Rally this summer, then continue riding it around the world. I have zero complaints about this bike (except for the vibration, especially on paved roads, but that’s about it) and I would highly recommend it to anyone going on a long overland trip, especially to South America.

Here, however, are some of the issues I encountered on the road. I’m no mechanic, and I’m still pretty green when it comes to bike maintenance, so this is by no means an expert account. I simply wanted to share what the Suzuki DR650 is like on the long haul and hopefully help those of you who are thinking of getting the same bike for a long trip.

Those fuel petcocks are there for a reason! After leaving the petcocks on overnight, I woke up to find fuel sloshing around in the airbox. Keep an eye on it to make sure fuel stays where it should.

Somewhere on the Trans Labrador Highway, the battery of my bike shattered leaving me stranded on the road. We couldn’t jump-start it and ended up playing the world’s largest claw game with a logging truck whose driver kindly gave me a lift. 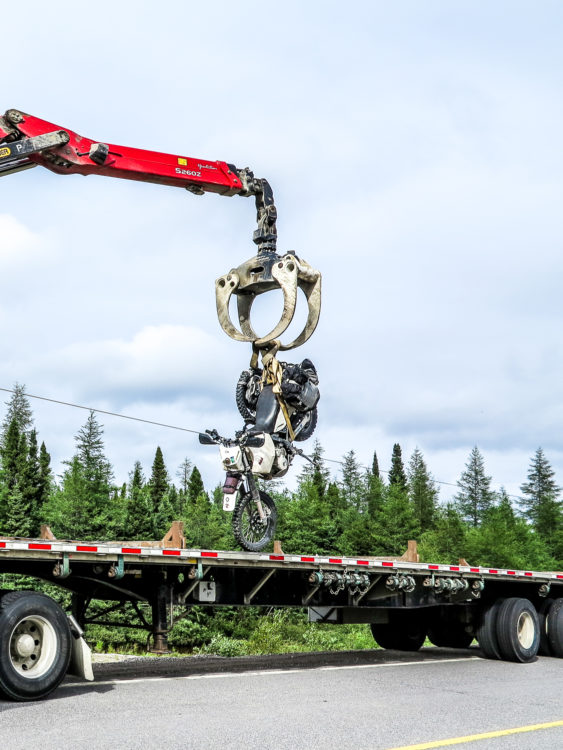 This one is entirely on me: knowing full well that my clutch was already a little worn out, I headed for a hilly off-road track with numerous water crossings and, because of inexperience, fried my clutch in the process.

During those two years, I’ve also had a bunch of flats, a snapped clutch cable, a sticking throttle cable, and a few sets of new brake pads and tires, not to mention oil changes and filter cleans.

All in all, I think this is a very decent result after two years and thousands of miles across two continents.