The Africa Twin was big news when Honda re-introduced it to the lineup, but it’s old news now, right? That seems to be the attitude of Brivemo Motos, with the introduction of a four-cylinder Honda adventure bike.

Brivemo makes its bread by selling and restoring Hondas in Switzerland, but apparently the shop monkeys have gotten bored with the usual oil changes, valve adjustments and so on. Instead, they decided to build an adventure bike based around Honda’s CB1000R neo-retro bike. The machine was unveiled at last month’s Wheels & Waves motorcycle/surf culture festival in France, as part of Honda’s celebration of its four-cylinder engine heritage.

The bike’s frame appears to be mostly unchanged, and we’d doubt they did any work to engine internals. The most obvious difference is the long-travel suspension; the front end uses a set of revised CRF450R forks, and the rear shock is supposedly also off a CRF450R (all originally built by Showa).

Aside from that, there’s a beefy new single-disc front brake with four-pot caliper, rally-style footpegs, bash plate, enduro-style handlebar with handguards, and an offroad headlight. The 4-1 exhaust feeds into a carbon-fibre muffler. The radiator is protected by a metal guard, and there’s also a set of crash bars protecting the engine. The stock street tires were swapped for Continental TKC80s. 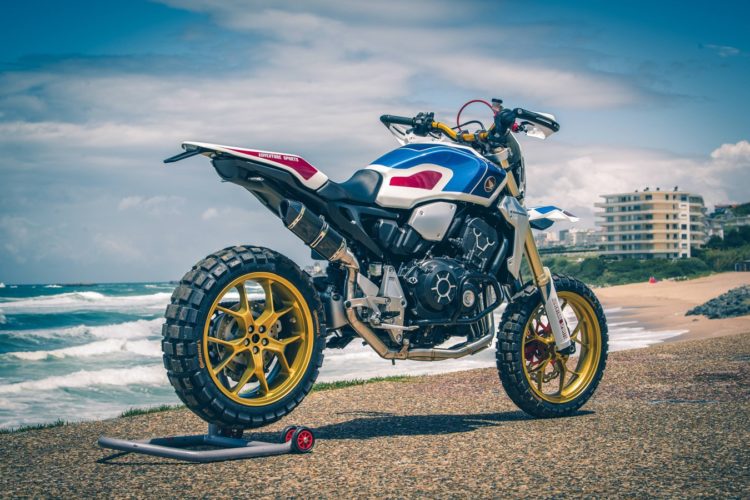 It looks cool, but this is mostly a styling exercise, as those rims and that seat won’t work off-road. Photo: Honda

It mostly looks good, but there are some obvious hindrances that will hamper this machine in the dirt. Those cast rims will be mangled easily if they start banging off rocks, and the bike’s seat does not appear to be conducive to aggressive offroading.

Despite those drawbacks, this machine does look fun. Honda’s teased four-cylinder adventure bikes in its recent past, with some examples popping up at EICMA, although it’s never appeared to be a serious idea. Maybe someone will take note of this machine and see some potential? Considering it comes with traction control and other electro-trickery (no ABS!), and an engine that should make more than 140 hp (depending on tuning), this bike could definitely be fun, if it saw some further development.