When many people ride motorcycles, they think they are helping the environment.  Less fuel, fewer emissions, etc.  But what if a very large percentage of the population used motorcycles as their daily driver?

That’s the case in Thailand.  In a recent survey, over 71% of 21,000 people surveyed said they owned motorcycles.  With two million motorcycles sold in Thailand each year, it’s clear that motorcycles are an important form of transportation for many, many people.

But what is the impact of that many motorcycles on the environment?  The interim cabinet of Thailand thinks it’s significant.  According to Nattaporn Jatusripitak, spokesman for the Deputy Prime Minister in charge of Economic Affairs, the cabinet wants to reduce the number of vehicles on the road and reduce fine particulate pollution over the long term. 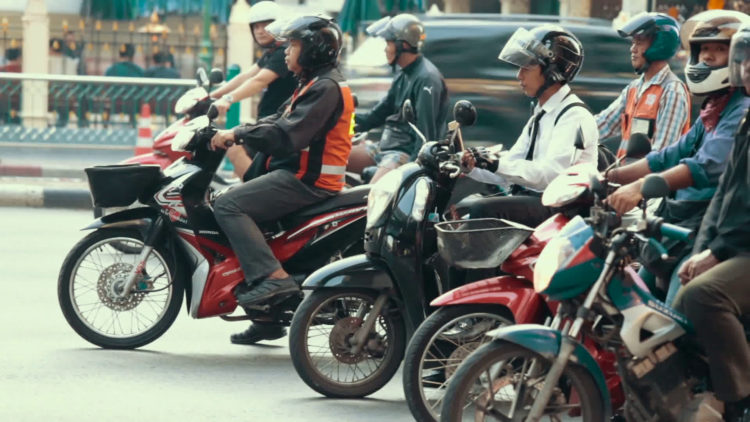 Motorcycles/Scooters are the daily drivers of many people in Bangkok, Thailand. Photo credit: Deposit photos

As a result, a new carbon tax has been approved for motorcycles.  The tax structure has 5 tiers based on engine type (gas, electric & hybrids) and how much carbon dioxide is emitted per kilometer.

Vehicles emitting under 10 grams of carbon dioxide per kilometer, such as electric motorbikes, will be assessed at only 1%.  That increases to 3% for vehicles producing 10 to 50 grams, 5% for up to 90 grams, 9 percent for up to 130 grams, and 18 percent for exceeding 130 grams per kilometer.

Nattaporn believes that the new tax will also generate additional tax revenue of approximately $22 million USD annually.  But he emphasized that the tax was all about protecting the environment and not about fattening the government’s coffers.

If you think that motorcycles have been singled out by the Government they have.  But Thailand has also had a carbon tax on cars for several years now.