Italy has anywhere between four and seven police forces, depending on how you count them. The Carabinieri, normally flamboyantly dressed up, get to change into black for riot control and to protect the Prime Minister when he attends the annual motorcycle show in Milan, but the Polizia di Stato has a couple of Lamborghini Gallardos. These are used, so Wikipedia assures me “for emergency intervention and transport of organs”, although how they get all those pipes into a Lambo is beyond me.

Seriously, now. The third police force, although I’m sure they would refer to themselves as the first, is the Guardia di Finanza. The vehicles are “dove grey or dark blue with a thin gold stripe along each side and the words Guardia di Finanza in gold underneath”, once again according to Wikipedia. But I’m here to tell you that they are not all painted that way… 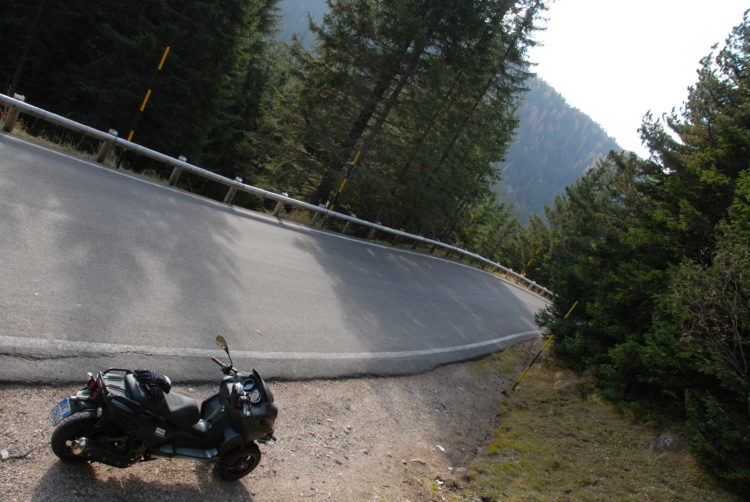 On the way up – excellent surface and plentiful opportunities to park – for a while.

It all started in quite an ordinary way, if you consider setting out to ride one of the lower Dolomite passes at all ordinary. The road was more or less what I had expected – narrow but good tar surface leading ever upward through thick stands of conifers, interspersed with lush green meadows. I was on my way up to the Passo di Rolle, on a road recommended by a friend back in Australia who leads motorcycle tours along here. The road kept narrowing, although the surface stayed smooth, and I could see that I was coming to the tree line with the pines shrinking to shrubs and the vista opening up.

Then a glossy black Land Rover Defender came around a blind corner towards me. I won’t tell you that it was up on two wheels, but it was certainly in a hurry. Enough for me to seek the relative safety of the road shoulder. Fortunately there was some! While I was still turned around looking after the car and trying out some of my newly-acquired Italian swearwords, I heard an engine starting up somewhere on the slope above me. That sound was joined by the woop-woop of helicopter blades and a chopper, just as black as the Land Rover had been, lifted off. 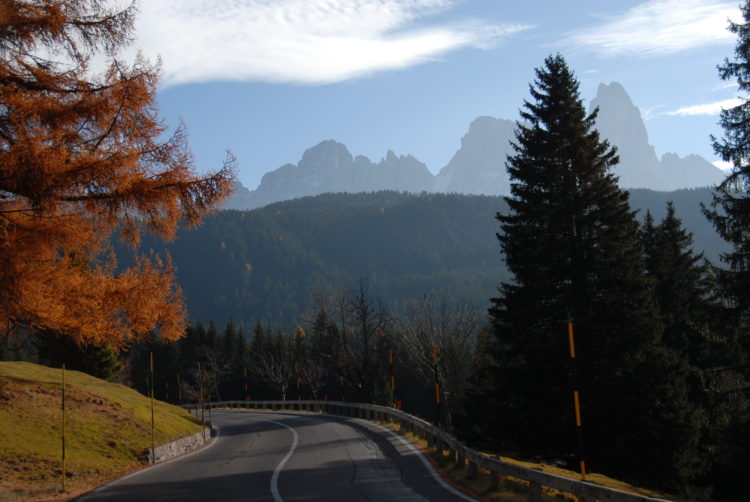 Getting closer to the top, with the peaks of the Dolomites beginning to show above the trees.

I topped the slope and was confronted with several more Defenders as well as another helicopter, all solid black with minimal identifying marks. I had intended to stop for coffee and perhaps a small pastry at the pass, but the forbidding visage of the submachine-gun toting bloke – in black, of course – who waved me on, suggested that it would be best to put refreshments off for a while. This I did, of course. I may be a fool, but when someone in black urban combat gear indicates that I should move on, I move on. With alacrity. 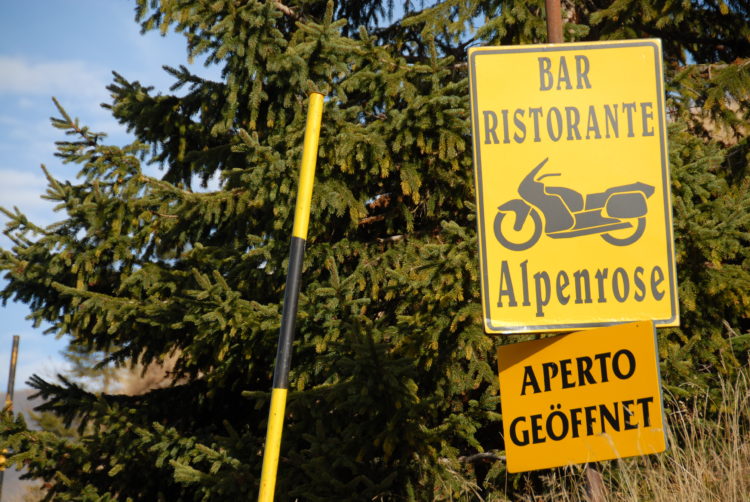 I was hoping for some refreshment at this place, but it was not to be.

At the bottom of the pass on the other side there was another Land Rover Defender, closing off the road to traffic. It had the blue-on-blue colour scheme I’m more used to with the Italian police, and a single officer standing next to it. He seemed slightly surprised to see me but made no move to stop me. I couldn’t help myself, though.  I pulled up and in my basic Italian asked him what the hell was going on. He indicated, not unkindly, that it was none of my business and that really, I didn’t want to know. I took a chance and, on a rising note, said “Guardia di Finanza?” He raised his eyebrows and half closed his eyes in the inimitable Italian gesture that means “Yes, but I didn’t tell you,” and I took the hint and rode on. 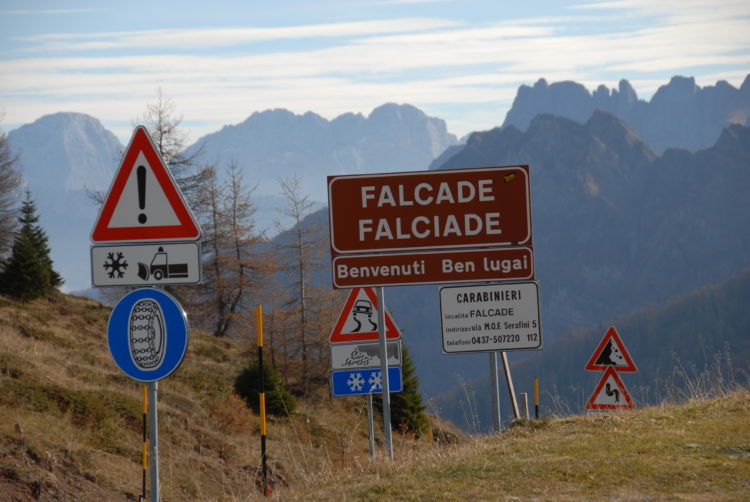 There is never any shortage of signs in Italy, but they don’t warn you about the black Landrovers.

Despite checking the papers for the next few days and asking around, I never did find out what the Day of the Black Defenders had been all about. Some undercover operation or other, or possibly even just a training exercise. But I’ve got to tell you, there’s nobody quite like the Italians at using black to get their message across.

On the way down – despite the heavy police presence, it’s a wonderful place to ride. Might be an idea to bring your own thermos, though.

Generally speaking, I’ve found Italian police of any description to be pleasant and helpful. Once, while I was riding a Ducati, I stopped next to a couple of cops who were also mounted on bikes to ask for directions. They were a little short with me, and when I asked the padrone of my hotel about this later, he smiled. “You were on an Italian motorcycle, and they were on BMWs, weren’t they? There you are. They were embarrassed.”

(All photos: The Bear)