There are flying moose in Maine.  Yes, there are.  For those not familiar, Maine is located in the northeast corner of the USA.  It’s not very densely populated and has a total population of around 1.3 million people.  Once north of its largest city, Portland, things quickly become quite rural.

Only 41.3 people live in an average square mile of Maine making it the least densely populated state in the northeast, eastern seaboard, and all states that have an Atlantic Ocean coastline.  So it’s no surprise that there are hidden gems like a flying moose to be found amongst the forests, mountains, and lakes.

A “Passing” of information

Kim and I found one quite unexpectedly last summer while riding through northern Maine.  On a relatively untraveled road, we passed a man riding a cruiser type bike, gave him a wave and continued north.

About an hour later, we decided we were hungry and pulled into a small country gas station that had food service.  We topped off our tanks and walked inside to get a sandwich.  We placed our order and sat down at one of the two tables to wait.

Not long after, a man walked in dressed in riding gear.  He also ordered food and then asked us if the bikes outside were ours.  We said that they were and he said that he was the person we had passed. 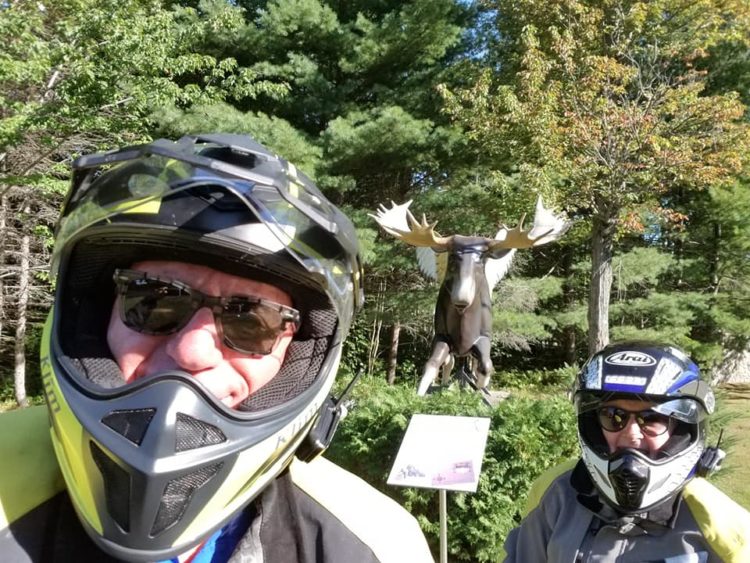 We invited him to our table to eat and we began to chat.  He asked us, “Are you here to see the flying moose?”

Kim and I looked at each other somewhat dumbfounded and gave him our best deer in the headlights stares.  “Umm, no.  What flying moose?”

He then proceeded to give us some general directions that of course went in one ear and out the other.  But now intrigued, we had to see the flying moose.

We finished our lunches, said our goodbyes and returned to the bikes.  After about an hour of wandering, we did indeed find the flying moose of Maine.

It was big, it was shiny, and it had wings.  It’s kind of hard to explain finding a winged moose in the “middle of nowhere” but there he was.  At the side of SR15, between Greenville and Rockwood, there he stood, seemingly ready to take flight.

So how did a flying moose find its way to the side of the road in northern Maine?  The story is a little sketchy.  The moose was not erected by an organization, but apparently by a Maine resident.  The statue sits outside a private home’s driveway.

So now that we had found the flying moose, what was he commemorating?  According to a plaque mounted in front of him, he commemorates an Abenaki Native American legend.

According to the legend, Mahanak, the son of the grand chief Metgermett, befriended a young moose that had lost its mother when she tried to protect it from a pack of attacking wolves. When Mahanak found the young moose, it was badly injured and weak and was slowly dying.

The two friends became inseparable. One spring day, Mahanak and his friend were returning to the village after a long trek through the Etchemin countryside. They were forced to take a different route because the melting snow had caused the mighty Manosak river to rise. In an effort to avoid a huge rock, the two companions lost their foothold, fell into the raging river and were swept away by a powerful current.

Mahanak managed to grab hold of the moose’s antlers and climb onto its back. As they were approaching the Devil’s waterfalls, Mahanak implored the spirits of the forest to come to their rescue.

The spirits remembered Mahanak’s act of kindness on the day he saved his young friend. The spirits helped the moose descend the falls by keeping its head above the water and saving Mahanak from drowning. Two old hunters, who had witnessed the scene, said that the moose had descended the falls slowly, as though it had wings.

The following night, Mahanak had a dream. The spirits of the forest told him that his moose would be leaving him to go to the land of the spirits where it would watch over the inhabitants of the forest. Mahanak then saw his companion nod good-bye and slowly fly away, opening its mighty wings. By sunrise, the moose had disappeared.

But was there another reason why someone would put a large flying moose in front of their private home?  It turns out that the flying moose was adopted as a logo by MANAC, a semi-truck trailer manufacturer.  The company was founded by Marcel Dutil and he adopted the flying moose.

Some people suggest that the genesis of Dutil’s adoption of the flying moose came from his childhood.  Dutil told his friends that he wanted to be rich and they responded that he would become rich when moose fly.

Regardless of why the flying moose was adopted, it’s nice to see that someone has taken the time to memorialize some Native American history.  Oh, and if you want to see it for yourself, here are the coordinates.