When is a world a forgotten world? You might think that the answer is “when it has been forgotten”, but things are not so simple in New Zealand.

The first time I rode the Forgotten World Highway was in 1984, before it was forgotten. This thought always reminds me of Oscar Levant saying of Doris Day, “I knew her before she was a virgin.” It was just a road then, a convenient connection from New Plymouth beneath Mt Taranaki to the big volcanoes above Lake Taupo. My map didn’t show the road surface, and it didn’t occur to me that I might be heading for gravel. It was raining and I was wearing mid-eighties wet weather gear, which means I was soaked. The 500 Four Honda I was riding had road tyres.

As it turned out, the surface was no real problem compared to my shivering. When I got over the initial shock of suddenly slipping sideways off the raised middle of the road, it wasn’t too bad at all. I was a little concerned about slipping and falling over, but the bike seemed happy enough if I just kept the throttle reasonably open. I remembered that someone had told me to use the rear brake rather than the front on shingle, which is what Kiwis call gravel, and that worked. 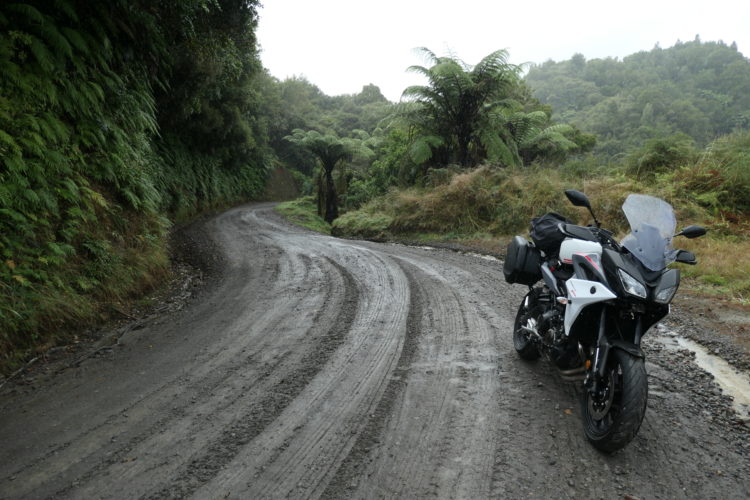 Off the main route you can find some terrific and somewhat more demanding tracks.

Mind you, I also had a habit of holding onto the bars as hard as I could because that would stop me from crashing, and hunching my back – also as hard as I could – because that would keep me warm. Neither of these things worked, but they gave me some comfort at the time. Until I reached Taumarunui, anyway, where I pulled into a service station and discovered that I could not take my hands off the grips and I’d shrunk a few inches because my head appeared to be permanently lodged between my shoulders.

But I didn’t crash and I didn’t die of whatever dying of cold is called, so my precautions had obviously worked. It took me some years to work out that they hadn’t. I had just survived on pure animal moxie. 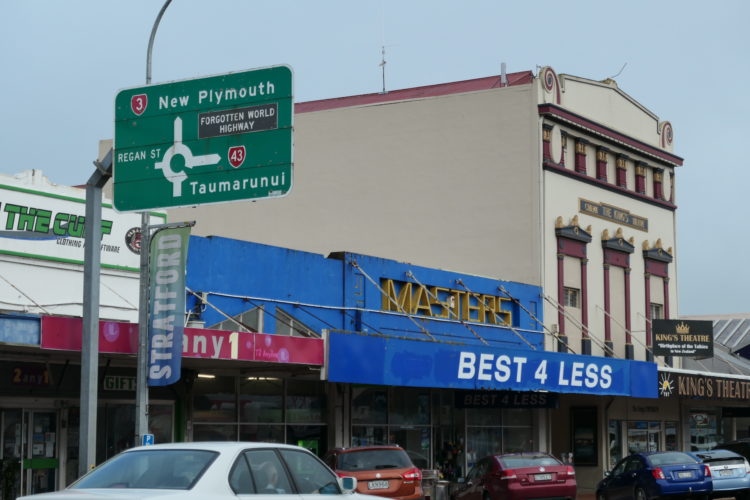 Today, the Forgotten World Highway or State Highway 43 is officially forgotten, which of course makes it one of the most promoted stretches of road in New Zealand.

“The Forgotten World Highway is one of the most scenic drives in New Zealand,” says the gummint website about forgotten highways. “This highly memorable driving journey is remote and mysterious to the extreme. This scenic route winds over four mountain saddles, alongside the spectacular Tangarakau Gorge and passes through the 220-metre-long, single lane, Moki tunnel. It has been ranked as one of the 10 worst roads in New Zealand by the Police.” And not only that. “It’s one of the most scenic drives in the world.” Not just New Zealand, please note. 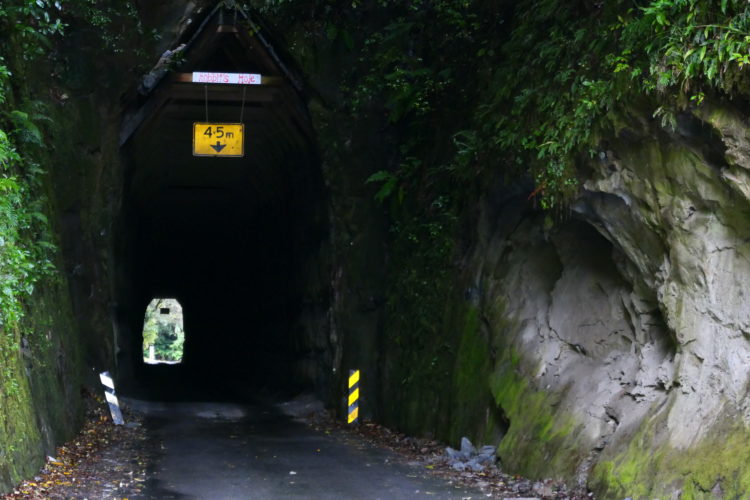 When they needed to raise the roof of the Moki Tunnel, the Kiwis lowered the floor instead. Can’t beat them. Seriously.

In fact it’s no such thing. Either of no such things. It is not forgotten, as its presence in every major guidebook about New Zealand demonstrates. And it’s not one of the most scenic drives in the world. You know how Paul said, when asked if Ringo was the best drummer in the world, “Ringo isn’t even the best drummer in the Beatles”? Well SH43 is far from being the most scenic drive in New Zealand. Not even close.

In New Zealand, when someone says “green” they are not kidding around. Ireland, eat your Guinness-soaked heart out.

What it is, is 150km of a lot of fun. It is a twisty mountain road that can’t seem to make up its mind whether it’s going up or down. That’s probably due to the fact that it follows the track of colonial bridle paths from the late 19th Century, which were less interested in smooth going than in taking the shortest possible route between two points. It climbs three saddles, namely the Strathmore Saddle, the Whangamomona Saddle and the Tahora Saddle. The Kiwis say ‘saddle’ rather than ‘pass’ because they’re modest folk. 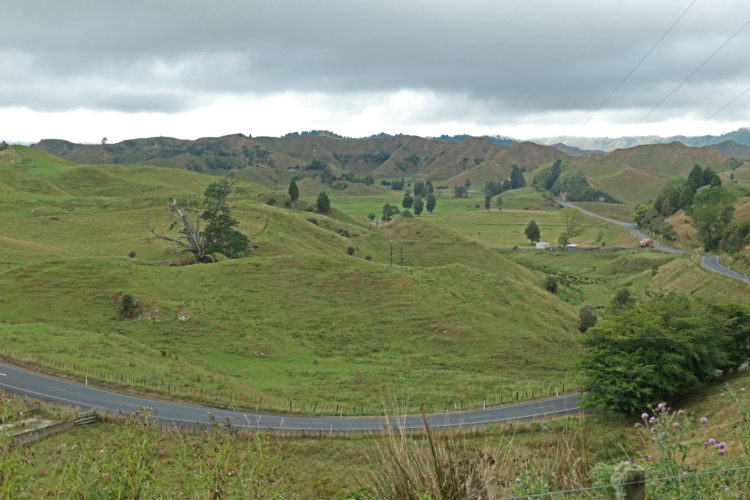 Nobody told the NZ Highways people that it’s the forgotten etc, they maintain most of it pretty well.

There are some fairly steep sections with serious drop-offs, but generally speaking the road is good. If, however, you want to have some fun you can take any of the tracks that lead off to places like Tangarakau with its waterfall and Tawhato. These will provide all the excitement you could want, I think. No, I didn’t explore very far on my borrowed Yamaha Tracer 900. 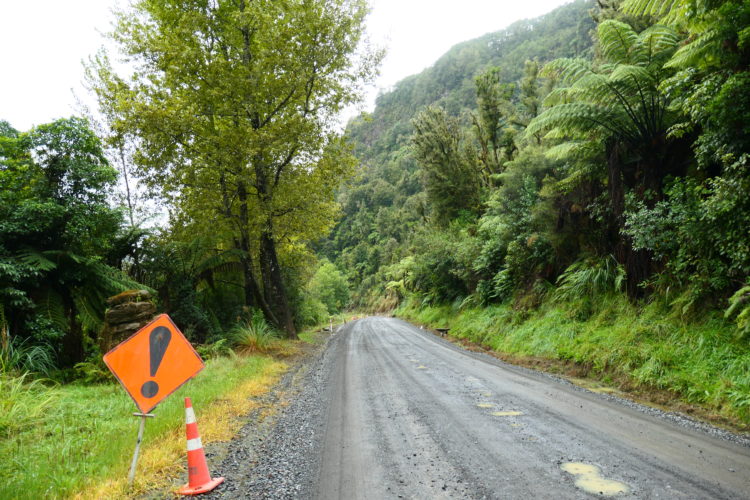 It’s gravel, but not as we know it Jim. It is shingle in New Zealand.

Contrary to the colonial bridle path story is the fact that for some of its length the road parallels a railway line. This was abandoned quite a few years ago, as railway lines sadly tend to be, but today you can rent little carts, powered either by your leg muscles or a tiny engine, and buzz along the track between Taumarunui and Whangomomona. The latter also has a pub, just about the only major building along the entire road. At some stage the publican declared the pub an independent nation, which seems to be the kind of thing that publicans in relatively remote places do to attract tourists. It sort of worked.

If you get a chance, ride the Forgotten World Highway. Not because of the hype, but because it’s a lot of fun. Don’t forget.