Editor’s note: This guest post was brought to you by our friends at The Blue Groove, a reader-supported quality independent motorcycle publication. 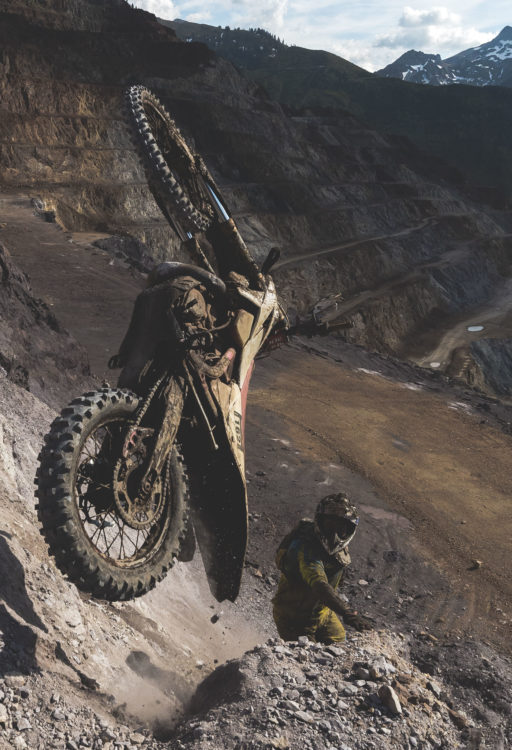 This is not an optical illusion. Terrain at the Erzbergrodeo is all but impassable. For many riders, a backflip is just another minor tipover.

I was following a Mexican journalist named José through a circus-sized tent pitched on the edge of a quarry in Austria. I was terrified he’d slip from sight, and in the darkness, I collapsed on a man passed out in a wheelbarrow. I jumped up immediately but José was gone. I swore at the man in the wheelbarrow, who had not moved. He may have been dead. I wished him dead. Then a man walked by holding the hand of a woman who held the hand of another woman who held the hand of a third woman. A drunken man to my right grabbed my shoulder and said something conspiratorial in a language I didn’t understand. This man gave me a long hard look, and I had the disconcerting sensation he was either going to kiss or behead me. Just then I caught a glimpse of José’s balding head across the tent. I slipped away but tripped over the man in the wheelbarrow and again cursed his existence.

I passed a shirtless man with perfectly formed breasts, and my face must have distorted in an odd way, because he, too, gave me a come-hither look. What a disgustedly seething cauldron of testosterone this place was, I thought to myself, just as a woman in a vinyl body suit paused and offered me a can of an energy drink. I gulped the liquid to show my approval of her outfit. My heart started to pound and I realized I’d fallen in love with her, and I pictured a life together in a chalet perched on the edge of a fjord. But despite my attempt to imagine her in a sundress in a sun-drenched meadow, I couldn’t get her out of the vinyl suit, and so I fell out of love. Time lost to falling in and out of love caused me to again lose José. Then I spotted the man with the breasts, and as I turned to run I bumped straight into José.

José, it’s important to know, had the key, which would fit the ignition switch and start the engine of the car that would take us to a lovely little chalet 10 kilometres from town, where I could sleep deeply and breathe the mountain air. But José said we couldn’t leave because an American journalist travelling with us had disappeared. “Well, that’s the end of her,” I said, thinking a Mexico City-man like José would understand how easily death claims the innocent. “Comments like that,” he said in impeccable English, “are not helpful.”

Earlier in the day

For the journalist trail ride, I was outfitted with smart-looking offroad gear which gave me the unwarranted appearance of a man who knew what he was doing. Our leader for our little ride was a man named Cyril Despres, a multi-time Paris-Dakar and Erzbergrodeo winner. (These details very much impressed the missing—and now presumed dead—American journalist.)

Mr. Despres, who is French and very handsome, led us down into a pit then faced us at a wall of loose gravel. It was too early to feign fatigue (we’d ridden for a minute, maybe two) but there was no way I could make the climb. I hurled my bike at the hill. Once I crashed, I’d relax. But I made it up. I couldn’t believe it. I was triumphant. And it was the last hill I successfully climbed on our little ride with the handsome Frenchman.

Later, much later, the same day

Long after midnight José and the rest of our party abandoned the American woman for dead. (Sentimental readers will be pleased to know the woman was found alive. She merely wandered away drunk, curled up on a pile of logs, and passed out. She was retrieved the next day and disappeared to recuperate.) 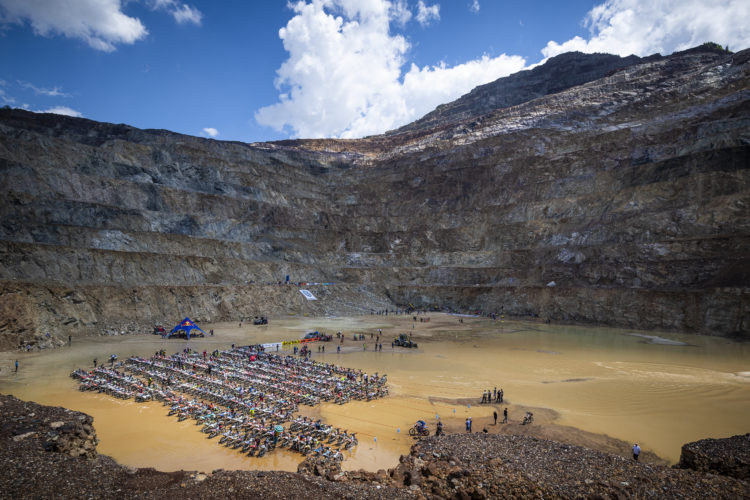 Rows of 50 motorcycles queue to attack the hill. That riders are dirty and wet before the event begins is an excellent example of the word foreshadowing.

I approached a group of Italian spectators and asked them to explain the Erzbergrodeo. Here is my translation from a language I don’t understand: “Erzberg” means a mountain made of steel. A hole of iron mined for a long time. The word “rodeo” means a horse parade by boys dressed as cows. The motorcycle race is in two parts. First you run up a road that’s not-so-bad to see if you qualify for the real race that’s very bad. How many riders are there? A man scribed the number 1,700 into the dirt with a stick, and of those, 500 qualify for the race.

Later, I asked a German who spoke a little English to clarify. The organizer, he said, tries to make the race so difficult that only one rider will make it to the end in the allotted four hours. The course begins in the pit of the mine and winds 40 kilometres into the surrounding hills. “And now we must go, because it is to begin.”

I sat on the edge of the quarry and looked down on 10 rows of 50 motorcycles. They left one row at a time, based on how well the rider did in not-so-bad qualifying. Just riding out of the pit to begin the event is treacherous—most of the world’s motorcyclists would never make it out of the quarry—and that’s the only easy part of the race.

Just as in European auto rallies, spectators congregate where carnage is likely, and just about everywhere is full of carnage. The marked course sent riders straight up hills of alarming steepness. Spectator involvement is key. Full-breasted Austrian men grabbed at the wheels of crashing bikes and dragged riders to the top. Riders do not seem to have a say in this—if someone wants to help you, then you will be helped.

Soon, crashed machines clogged the official course, and to avoid them, following riders fanned out, putting them into the laps of spectators. But I was having my own crisis. The ink in my pen had dried out and I was sucking on the tip to make it flow. While doing this, I noticed a man with a plastic horn 20 metres away waving it in my direction. He yelled something three times fast in an unknown language. Then he pointed down the hill and then back at me. I dove behind a rock the size of a car and a moment later a motorcycle crested the rise of a hill and sailed through the air. Had I not moved, it would have lopped off my head.

I came out from behind the rock and the man with the plastic trumpet blew his horn and gave me the thumbs-up. Then he pointed down the hill again and I jumped back behind the rock. But there was no motorcycle. When I looked out he and his friends were pointing at me and laughing. One man clasped his hands to his chest and made the face that a child makes when they’re scared. Another man sucked his thumb. Then the Italians from earlier passed by and stopped. Thankfully, they had not witnessed this affair. They told me they’d meet me later in the “pop-pop,” which I took to mean the main tent. They disappeared and I went back to sucking my pen. 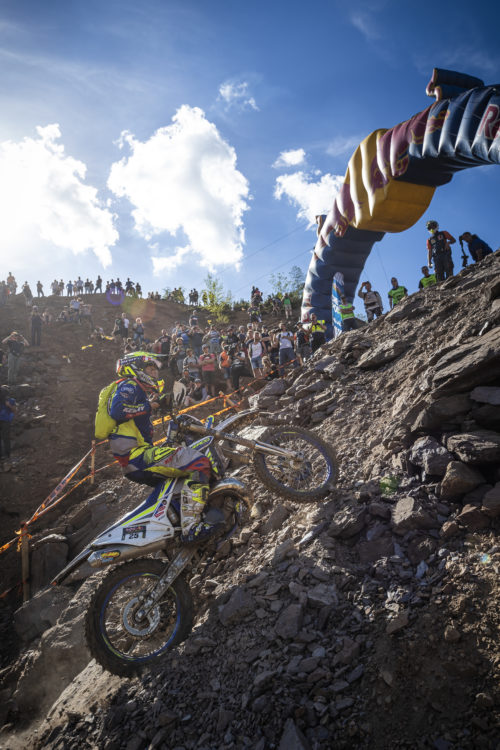 One finisher out of 500 in the time allotted. That’s the organizers’ goal. They’ve whittled it down to around a dozen, which means every year the course gets a  little bit more miserable.     Photographs Erzbergrodeo + Red Bull content pool

The End. Just about

Most riders had crashed out, given up, or destroyed their machines. One section, near the end of the 40 kilometres, passed through a valley with rocks the size of refrigerators. All but the fittest citizens of Austria would have found it impossible to traverse the area—on hands and knees. I watched a rider take 30 minutes to travel 300 metres one miserable rock at a time.

And then another rider, stuck and frustrated, removed his helmet and a moment later a passing machine bounced a rock off his head. The race was stopped and the rider evacuated. Other riders trickled into the checkpoint and, hearing of the stoppage, collapsed on the ground. They begged those within earshot for food and water. I gave the last of my water to a man and asked how it was going. “Fuck-off mate,” he said good-naturedly. I gave my last energy bar to a man who blew me a kiss. “It was a race until half an hour ago,” he said, “but this is impossible.” He asked me how long it was taking riders to make it through the rocks. I told him half an hour. He said it would take him twice that. Once the race resumed, it took him a lot longer than that.

Witnessing so much exhaustion made me exhausted, too, and with the race over, I retreated to the circus-sized tent. I was dehydrated and cranky. The woman in vinyl with the energy drinks offered another sample. I declined. This impressed her. “I only drink water and vodka,” she said, “but not mixed together.” She laughed and flashed a beautiful smile, and I imagined her in a sundress in a mountain meadow of wildflowers. I asked for her thoughts on the event. She said it made her wonder what men do when women aren’t around. I shuddered. Images of man breasts filled my vision. And then I turned away and went in search of the Italians; they’re the only people who speak my language.