What I am about to tell you is the story of my trip all around Australia. An adventure 37000km and 220 days long across one of the most incredible country in the world.

If you want to skip the reading, you can just go on youtube and watch the “short movie” I made about it.

Let’s start from the beginning.

I never really took a big trip on a motorcycle before starting that. I also never really had tried camping before in my life. So the concerns and fears about starting my very first grand adventure were enormous.

Where will I sleep? Will it be safe? How would I know the best route? What should I carry with me?

These were just few of the questions I had popping out in my head when I started to realize that the departure date was getting closer and closer. When I decided to quit my job and go around Australia on a motorcycle, I kind of had to take some sort of leap of faith. You know what they sa: if you don’t trust in yourself, who will?

So I left Sydney in February 2015 and came back only in October, with a quite sore arse but with eyes full of joy. 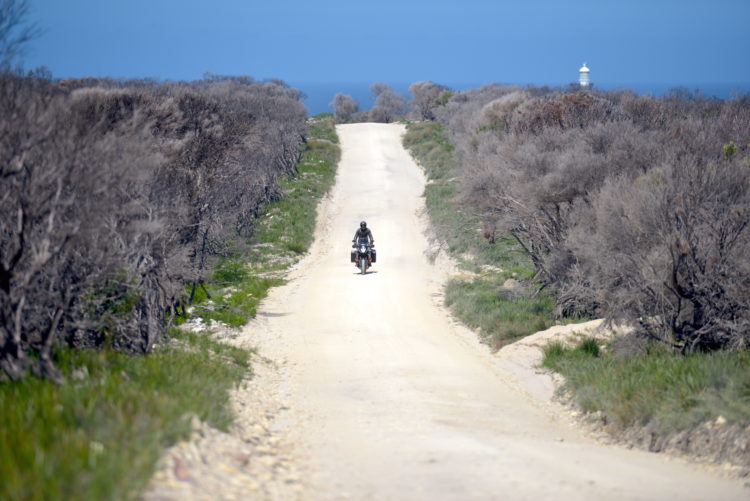 So the trip started riding south, a “short” 1200km ride through the beautiful south of NSW and the flat Victorian countryside, reaching the state’s capital. From there I hopped on the Spirit Of Tasmania, the ferry that takes you from Melbourne to Launceston.

I knew little about Tasmania, except that it was a paradise for motorcyclists. I easily spent a whole month riding around that beautiful island, looping it left and right, for almost 3500 km.

I soon realised WHY Tasmania was somehow built for motorcycles: an endless sequence of turns on a perfectly sealed road, incredible off road tracks, tremendous landscapes, with no traffic and no police at all. It was simply a fantastic place to ride, rich in spectacular landscapes, pristine beaches, and crystal clear waters. 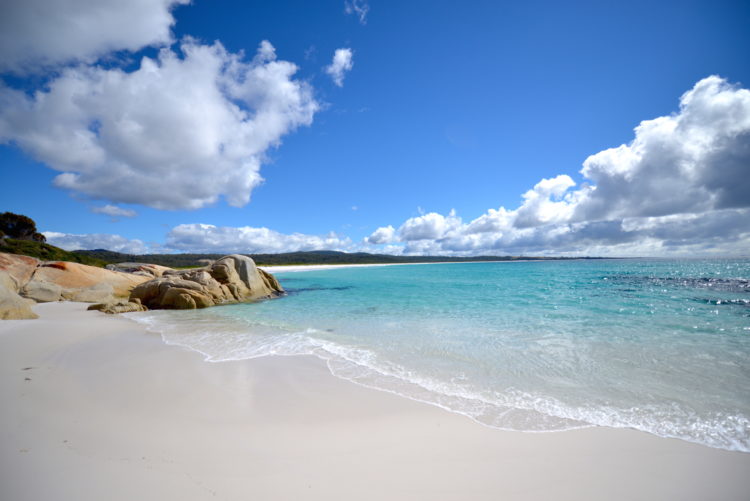 My time there came to an end. I went back to Australia mainland to continue my journey, which saw me heading toward Adelaide, the capital of South Australia. On this stretch of road from Melbourne to Adelaide, there’s one of the most famous and iconic rides that a motorcyclist can dream to do in his life: the Great Ocean Road. Aside from its dramatic turns, the GOR also offers incredible scenic viewpoints, like the 12 apostles and the London Bridge (o London Arch), two of the most famous landmarks of Australia.

Once I reached Adelaide, I headed south through the fantastic Marlborough wine region to hop on the ferry that took me Kangaroo Island.

The almost deserted island offers one of the most incredible wildlife spotting in the country. Needless to say, I had a couple of close encounters with Koalas, kangaroos and even an enormous eagle feeding itself off a roadkill. Its beaches and its landscapes were absolutely incredible to witness.

Back to the mainland again, it was time to ride across the continent via the famous flat and treeless land called the Nullarbor desert.

It was quite a unique experience, I have to say. Absolutely no turns for 1400km. Just an infinite straight line with the same flat and treeless landscape, home of the second longest stretch of straight road in the world (146 km).

That day, in particular, I rode for 1100km; I just wanted to see how hard I could push myself. It was just incredible to cross 2 time zones and ride for 12 hours, trying to “race the sun” that rose behind my back and set right in front of my eyes when I arrived on the west coast. 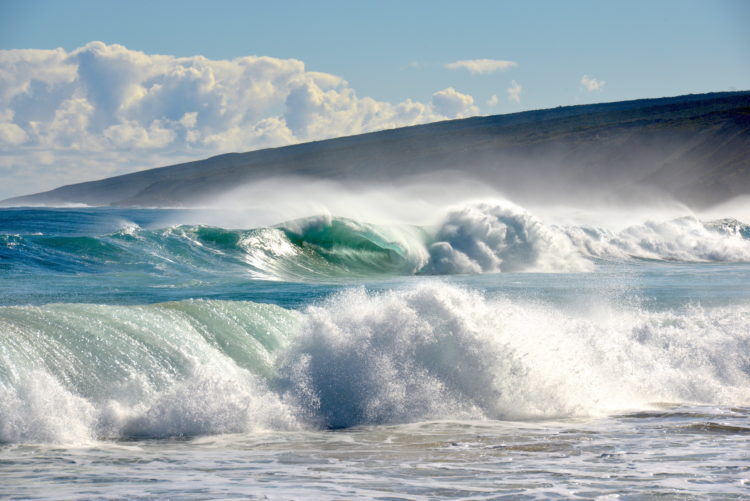 Surf’s up. only for few though!

I subsequently rode along the south east regions, passing Esperance, Albany and Denmark, with its gigantic gum trees and its incredible coastline.

Margaret River then, was just another enchanted location; a paradise for all wine lovers and surfers. It’s still probably my favourite region I visited along my trip. 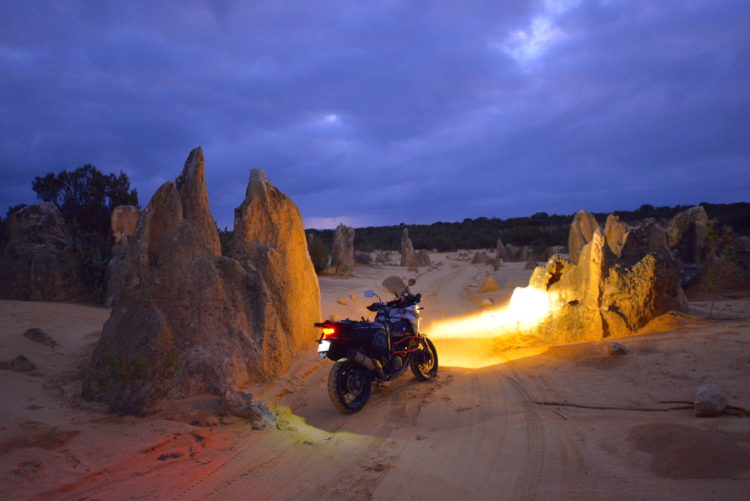 After few weeks sipping wine and swimming in blue waters, I rode up to Perth and then proceeded north, crossing the Pinnacle Desert and arriving in the magical Shark Bay, where beaches are made of tiny white seashells.

North of that, I rode to Coral bay and Exmouth, two of the most incredible locations I’ve ever seen in my life. An open air aquarium, few meters from the shores, where marine wildlife and humans interact with a special harmony. There, I swam with the beautiful whale shark, the friendliest of the feared predator’s family.

I then detoured toward Tom Price to visit the Karijini National Park, a bright red 600 millions years old canyon filled with blue water in the middle of a very dry and sandy desert. 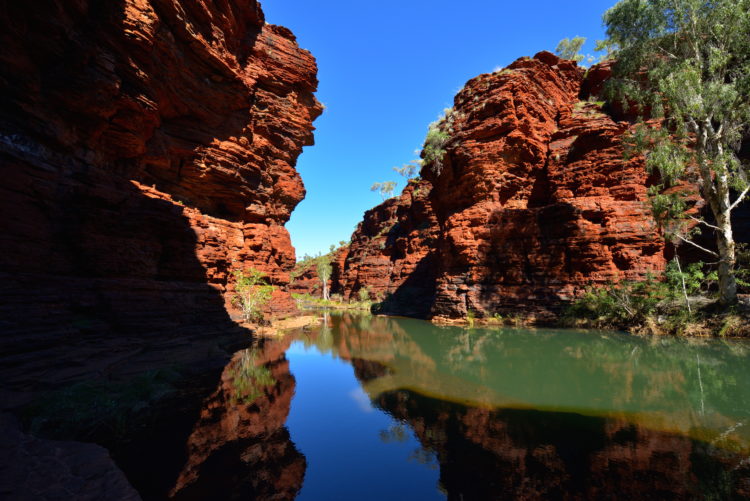 The best was yet to come. Broome, in fact, was just the next stop on my route. I stopped there a month, soaking up the sun and chilling in its marvellous waters, with some great people I met. 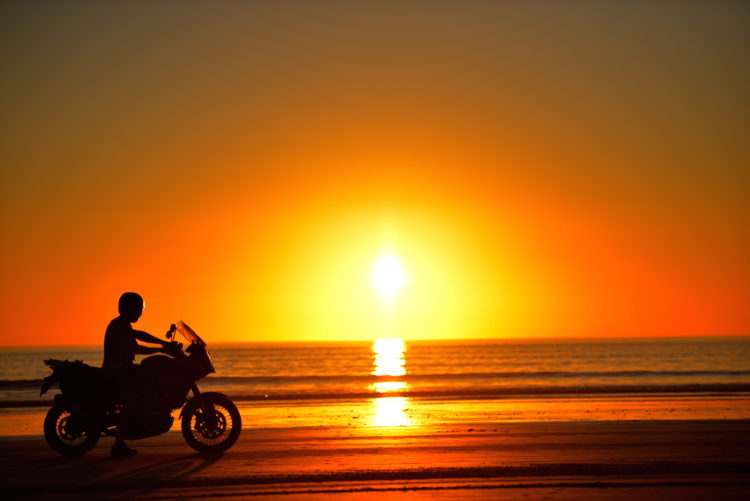 From the sweet afternoons spent in Cable Beach, to the roughness of the famous Gibb River road, a 1500km stretch of dirt road that goes along the north west coast of Australia.
Dust and corrugation, scorching heat and a couple of flat tyres definitely tested my adventurous spirit.

Hitting the sealed roads again, after a week of rattling bones, was definitely a relief. 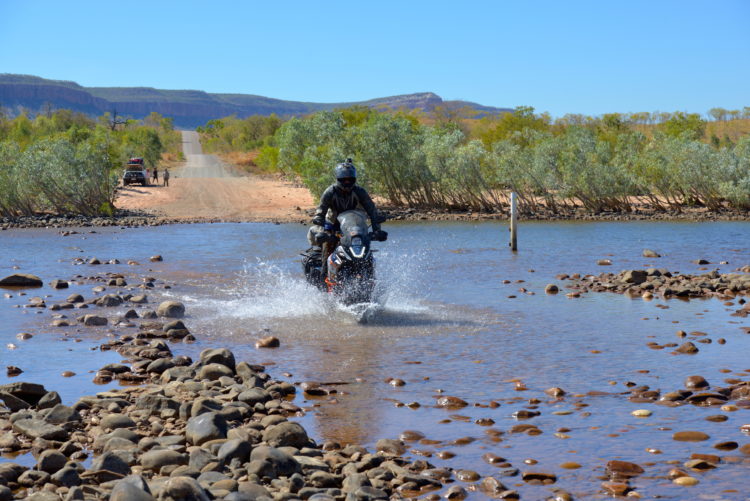 From Kununurra to Darwin was an easy and smooth ride, aside to the fact that my front tyre was completely destroyed due to the massive puncture I suffered on the GRR.
Riding back south from the very hot Darwin, I visited Litchfield and Kakatu National Parks, some of Australia’s most renowned National parks. The heat was exhausting, but luckily the natural pools to freshen myself up weren’t lacking in this part of the country.

The heart of Australia was just a short 2000km ride. The road from Darwin to Alice Springs has a convenient “no speed limit zone,” which is great when you have a 150hp monster to unleash. 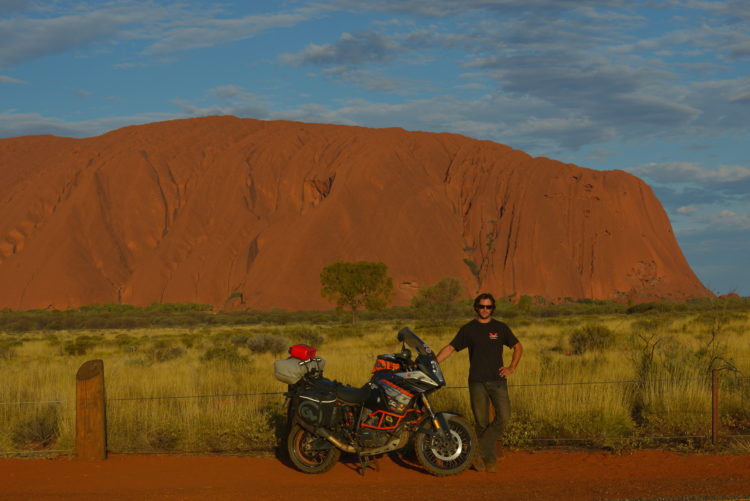 Once I arrived in front of “the rock,” its incredible grandness simply took my breath away.
I spent a night by myself in silence, on one red sand dune, admiring the beauty of that place and soaking up the mystical energy that was pervading in the air. 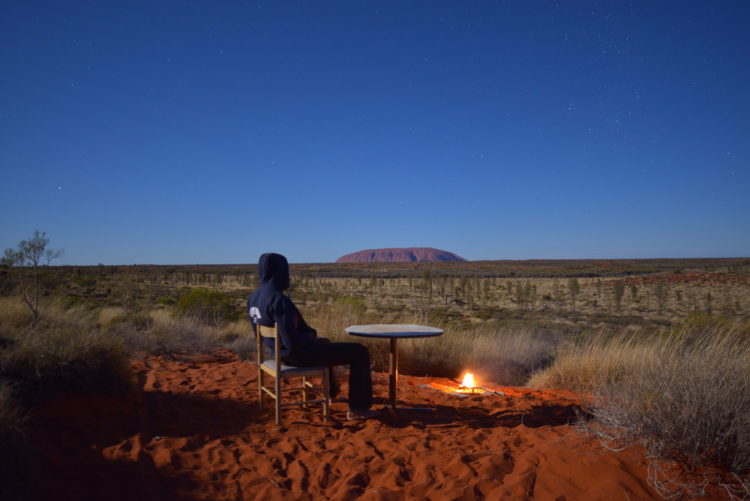 Some of the back track near Ayers Rock were challenging, and I struggled at times, trying to handle my very heavy partner in crime. From the “red center” I started to head Nord East, precisely toward Cooktown, in the middle of the tropical part of Australia. The road signs that you encounter in this part of the world leave you with the mouth open; you don’t have any clue somehow on what you can actually find on your path when you see something like the “Cassowary Crossing” sign on the road. 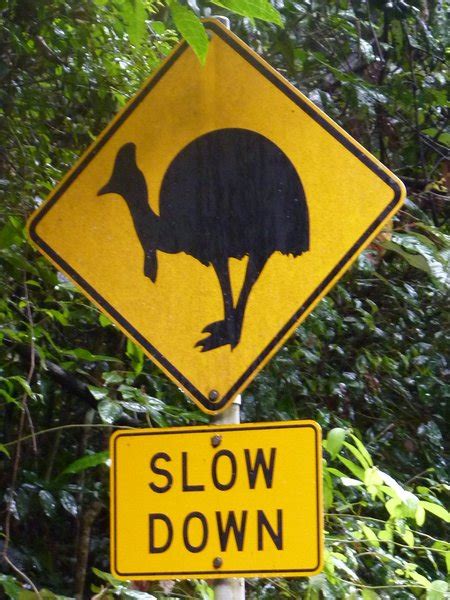 My ride toward Port Douglas was absolutely fantastic thanks to the stop in Cape Tribulation, and the great ride through Bloomfield Track, a blessing for any adventure rider.

Sadly, my descent toward “civilisation” was starting to kick in, passing by Cairns, Townsville and Mackay.

My adventure was about to reach its end so I decided to spice it up with some fun riding, taking advantage of the fact I had a brand new tyre at the back. I headed to Rainbow beach and rode all the way to Noosa Heads, along the coastline, during one of the mistiest and windiest days I’ve ever seen. 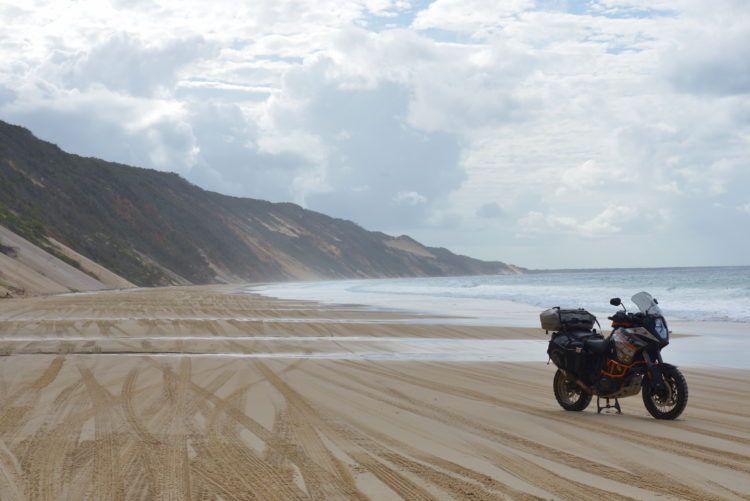 The ride there was an absolute fun and Rainbow beach became definitely one of my favourite spots in Australia. Same road, 2 days later, a massive sink hole swallowed 3 pickup and 2 campervan. Nobody luckily was injured. 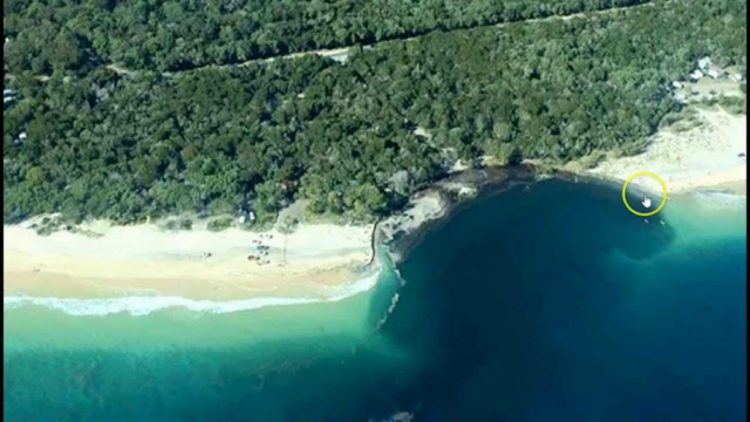 No more Crocs or Cassowaries on my way. No more deserted beaches. Just tarmac and speed cameras, down to Sydney.

All of the sudden I found myself on that bridge, with the Opera House in sight, with the sun shining on my face again, heading toward my favourite beach: Bronte. 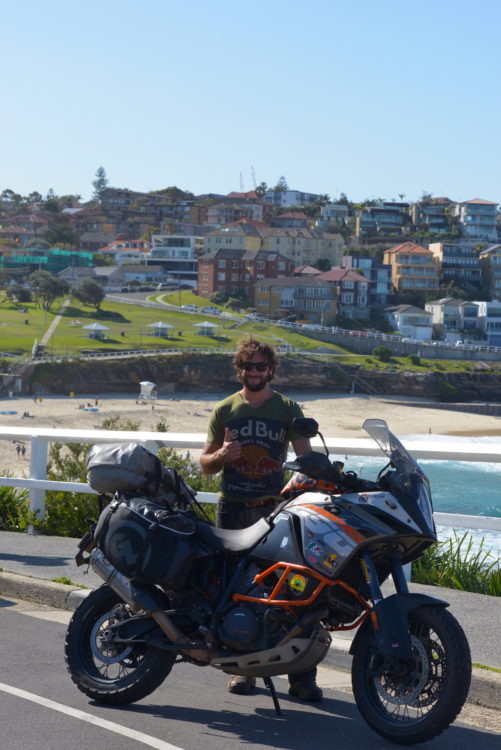