It’s one of the few museums in Iowa that decided to reopen.  Still, the museum has made several changes to keep staff and visitors alike safe.

For safety and to make visitors feel more comfortable, staff will be wearing masks, and guests are encouraged to do the same.  No more than five people will be allowed in the gift shop at any one time to allow for social distancing.

“That was tough. Even though we weren’t open the utilities continued, $1,200 dollar a month electric bills continued to mount, we have to just hope to make it back this year.

But thanks in part to the federal government’s paycheck protection program, the museum was able to keep all seven of its employees through the shutdown. 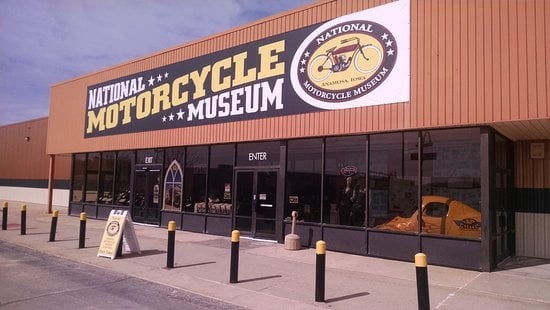 But the museum isn’t out of the doldrums just yet.  It was closed during April and most of May and the first few days since the reopening have not seen the number of people from previous years.

Barber said that the National Motorcycle Museum is different from some other museums.

“This kind of museum is a little different, because you’re not handling items, you’re not hands on, and you’re looking from a distance so you don’t have to worry about that. We can space people out, we have a large building.”

Barber hopes that people will quickly return to the museum.  From my perspective, it is one of the more interesting motorcycle museums in the US.  Unfortunately, it is not as well known as it should be.  Kim and I found it by mistake one afternoon while riding across the country to Alaska.  It sits in the back of a parking lot behind a Subway restaurant.

But don’t judge the museum by its location.  Inside you’ll find many, many different exhibits with bikes from all eras and from around the world.  Even better, the bikes are out in the open where you can clearly see them from where you stand. 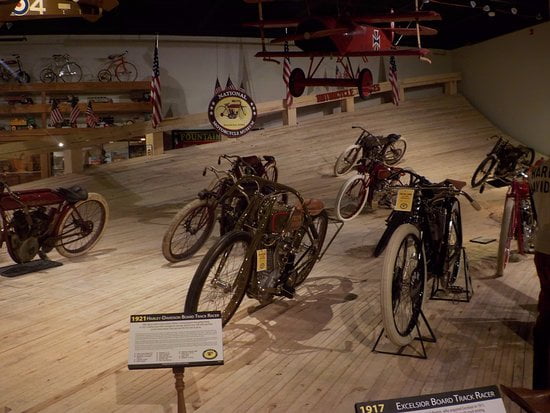 One of the dioramas featuring board track racers at the National Motorcycle Museum. Photo credit: Tripadvisor

Bikes in their element

One great feature is that some of the bikes have been put in dioramas.  There you can see the machines in their natural setting.  The dioramas for the board track racers and hill climb machines were my favorite.  If you’d like to get a taste for the museum, you can click the link at the beginning of this article, or you can see what Kim and I saw there during one phase of Kim and Mike’s Most Excellent Planet Ramble.

Do yourself a favor and drop by if you are in the area.  You’ll see some great bikes and also support a 501 C-3 charitable non-profit organization.