This guest post was kindly contributed by The Blue Groove – an independent voice for swashbuckling writing, rigorous journalism, and all that’s glorious—and gloriously absurd—in motorcycling. thebluegroove.com This article was originally published here.

Despite possessing the unflappability of a seasoned politician, David Robb’s voice filled with weariness and his smile tightened when I asked about his R1200C cruiser of 1997. Robb, the US-born former head of design at BMW Motorrad, defended his new-wave, new-age cruiser to the bitter end. He claimed none other than Willie G. Davidson (the wizened old ghost of Harley-Davidson) thought the R1200C distinctive in a field awash with Harley clones. But does distinctive equate to desirable?

The R1200C was from the end of an era when manufacturers believed the way to gain foothold in the lucrative cruiser market was to improve upon the Harley-Davidson. Hindsight has much to tell us.

Yamaha’s first Virago had a smooth, wide-angle V-twin with overhead cams and shaft drive. It functioned far better than any contemporary Harley. Today, forty years on, Yamaha’s decimated cruiser lineup consists of the ancient V Star 250 (nee Virago), the Bolt (as functionally compromised as a Sportster and as mechanically sophisticated as its name suggests), and the Star Venture, a narrow-angle V-twin Electra-Glide knockoff. With pushrods.

A cruiser, similar to a tightly structured musical form like rockabilly, bluegrass, or Mongolian throat singing, doesn’t stray far from its founding tenets. Songs within each genre sound the same, give-or-take (some are fast, some are slow) because if you broaden the sound—no matter how good it sounds—it’s not rockabilly, bluegrass, or Mongolian throat singing anymore.

David Robb’s R1200C functioned better than many of its competitors, but function isn’t paramount to fans of the genre. What is important? The look. But the R1200C appeared as if the driver of a reversing truck had lost the bike between his mirrors and bent its fork, popped the fuel tank up off its moorings, and tucked the seat and rear fender back beneath its hindlegs.

By 2004, the R1200C was done. BMW admitted its engine was holding it back. That’s cruiser-talk admission that its engine was too small. But BMW didn’t dismiss the idea of returning to the cruiser marketplace. With the R18, it’s done just that. Announced over an excruciatingly protracted timeline, the production R18 was preceded by a video series, two farmed-out custom builds employing a prototype engine, and BMW’s own Concept R18.

The proprietor of California’s Butterscotch Motor & Bean hosted the eight-part video, which chronicled the R18s progression. Within the nearly two hours of footage, worthy tidbits could be gleaned, but the series has an infantile obsession with unveiling “secrets” like the fuel tank badge, or the revelation that the driveshaft will be exposed. The two engines farmed to custom builders returned disappointing results. On one machine, titanium rods suspend the engine in space, like a dead fly snagged in a spiderweb, while the second machine’s oversized wheels make the already large engine appear absurdly engorged, like a swollen testicle. If Arlen Ness’s dalliance at Victory taught us anything, it’s that men-with-torches are not motorcycle designers.

It took BMW’s own Concept R18 to right the ship. Looking like a vintage BMW that’s been squished and stretched, the bike is, equally, understated and outrageous. The details are exquisite. The driveshaft lacks unnecessary adornment, and, yes, it’s exposed. Too heavy and too long, the Concept R18 follows every rule of cruiser design. It’s as old-time as Bill Munro and his Bluegrass Boys singing a murder ballad. Like Heritage Softail Harleys, the Concept R18 is historical bling at its finest. But you can’t buy this bike. And that’s the problem. 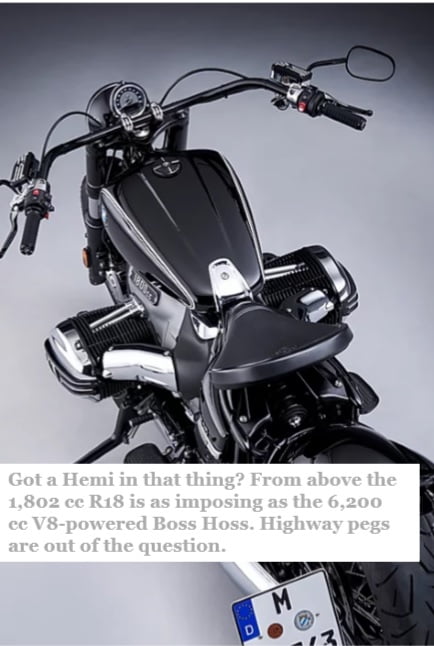 Prototypes are made for rolling into photo studios and onto the low plinth at shows. They are motorcycles unconcerned with the demands of noise laws, emissions regulations, or safety requirements. And they’re festooned with components too expensive to mass produce.

That the R18 exists is a peculiarity. The men who would buy these bikes in significant number are timing out of riding (and, indeed, of life) or have regressed to large-displacement scooters. The Japanese are slowly withdrawing from the big cruiser market. Harley is in the midst of a cash-hemorrhaging identity crisis and must contend with Indian scampering beneath the table for scraps. The R18 missed peak cruiser by a good 25 years. 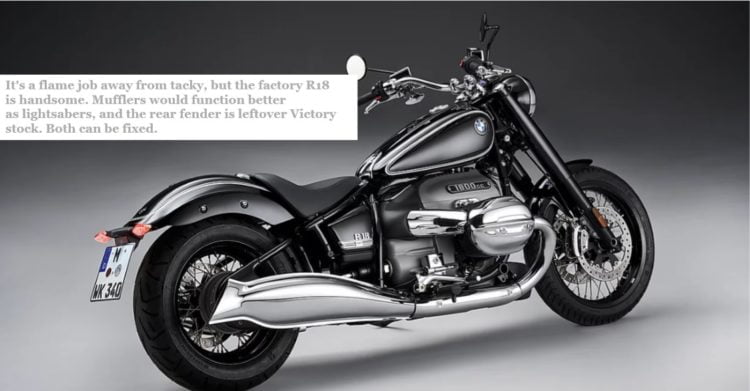 It’s a quirk of the times that, simultaneously, Harley is searching for a high-tech future while BMW plunges headlong into its old-tech past. The two brands have swapped identities. Is BMW nostalgic for the opportunities it lost because it didn’t have a viable machine in the golden-age of the cruiser bubble? Or is it far simpler than that? Perhaps the R18 is the equivalent to the pickled ginger that comes with every sushi order—a palette cleanser intended to expunge David Robb’s R1200C from the corporate consciousness.