Motorcycles serve many roles: transportation, recreation or simply collectors’ toys. Now, in sub-Saharan Africa, the Okoa Project organization is using them for something entirely new. In the battle against the global coronavirus pandemic, the organization is converting its innovative motorcycle ambulances into mobile units in the fight against COVID-19. It’s a story of adaptation to new threats, the same story that the whole world is facing right now, and it’s a battle where you can lend your support.

The Okoa Project story began in 2016, when the The Olive Branch for Children, a non-government organization in Tanzania, reached out to the Massachusetts Institute of Technology for help. The Olive Branch needed help from creative problem solvers, says Leah Turner, the Okoa Project’s director of marketing and fundraising. MIT’s D-Lab was a natural choice, with its focus on developing innovative technology to address global poverty challenges.

Originally, the Okoa Project was focused on reducing maternity mortality in rural Tanzania. Almost all of the world’s maternal mortalities occur in developing countries, and half of those mortalities occur in sub-Saharan Africa. Pregnant women don’t have access to proper health care in rural regions, and have little opportunity for transport to medical centres. The Project’s first task was building a cost-effective motorcycle ambulance, to get people to medical treatment 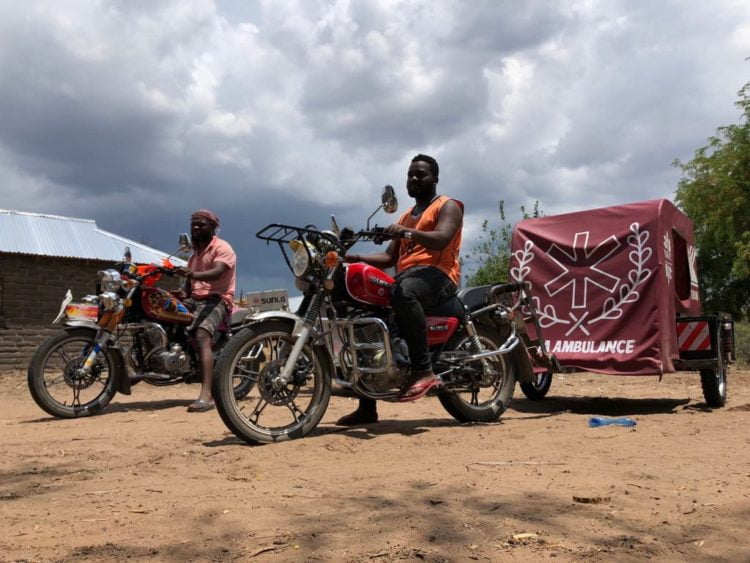 Your chariot has arrived! These moto-ambulances are built locally, reducing costs.

First, Okoa’s engineers designed the Mbeya Model, a lightweight and tough trailer meant to be towed behind a motorcycle. The Mbeya has a stretcher, and a seat for a family member to ride with the patient—it may be light, but it’s intended to carry a load. There isn’t much to it, just a metal frame with a fabric covering, but it changes the realities of pregnancy for many women.

Okoa Project team members also designed a three-wheeled moto-ambulance, called the Sissala Model. It’s powered by a small-cc motorcycle engine, from the bikes that are common to the area. Like the Mebaya, this rickshaw-like vehicle is built in Africa, with a beefed-up front end to handle the extra weight and bumps, and an ambulance/cargo section in back.

The ambulances need drivers, and that’s where the Project’s in-country partners come in, says Turner. Organizations like The Olive Branch For Children and The Virtue Foundation have the local knowledge needed to hire the right staff, and navigating the local healthcare system. 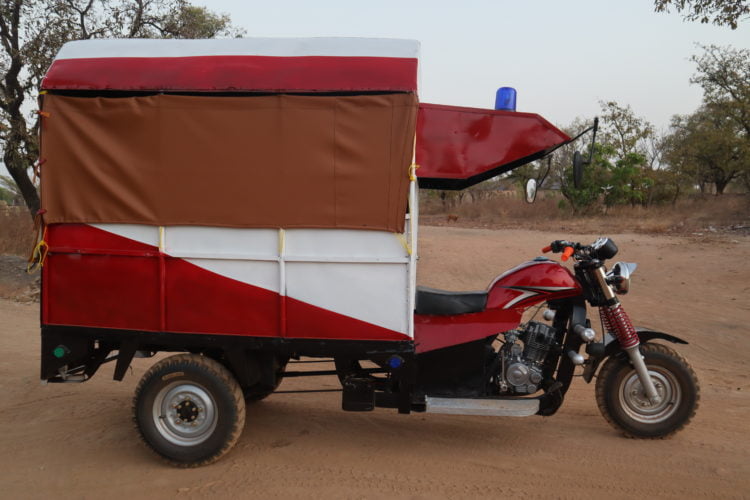 A built-from-scratch custom that’s functional, unlike most brats/cafe racers/scramblers/choppers out there.

“These organizations have an established presence in the communities, and they know exactly who to connect us to, from finding taxi drivers in Mbeya to finding a painter and seamstress in Tumu. At each of our posts, our partners have been instrumental in connecting us to the local engineers who join our team to build ambulances,” says Turner. “In Tanzania, motorcycle taxi drivers are quite common; with that existing infrastructure we were able to find trusted drivers and train them on how to attach and detach the trailer and give them first aid training. We also worked closely with the community to set up an ambulance dispatch system that would make sense and actually be used by the communities.

“In Sissala East, Ghana, finding drivers was a different situation. There are small referral sites that are staffed by a nurse typically called CHPS compounds (Community-based Health Planning & Services), and in working with the district health office we found that it made more sense for our ambulances to be stationed at the CHPS compounds so that patients could be driven and accompanied by a trained healthcare worker. “

So the Okoa Project started building ambulances, and set up a network of staff to man them. Then, COVID-19 happened.

The Project started its response by asking its engineers to build hand-washing stations, distributing them with its ambulance network, along with soap and PPE. The hand-washing stations were designed by a Ghanaian woman with the country’s national health service, and they’ve already been battle-proven, says Turner. During the 2012 Ebola outbreak in West Africa, these handwashing stations reduced transmission of the disease. Now, they’re fighting COVID-19. But, Turner says the Okoa Project is looking at new ways to use its organization to fight the coronavirus pandemic. Some possibilities include using the ambulances as mobile testing clinics, or using them to deliver essential goods so communities can quarantine more effectively. But even though this is a big switch from the original work with pregnant mothers, Turner says the Okoa Project’s goal is ultimately the same. 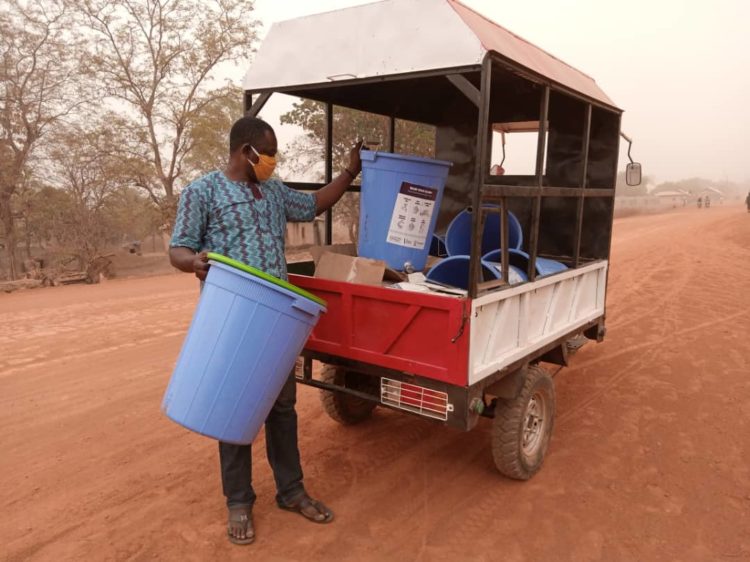 These handwashing stations may not look like much, but the design proved effective in fighting ebola. Now, the Okoa Project is using these devices to battle COVID-19.

“While our organization was started to address maternal mortality, we are dedicated to connecting people to healthcare, whether they need to give birth, receive treatment for malaria, receive rehydration therapy for waterborne illnesses, or now be treated for COVID19. We’ll continue to make sure that those who are often forgotten or left behind, our rural communities, have the same access to quality healthcare as their urban counterparts,” she says.

In the long term, Turner says the Okoa Project’s emergency aid work will likely lessen, but the group will still work hard to help communities access healthcare, wherever they are.

“Through this crisis, it’s become even more evident if it wasn’t before that the health systems in the communities where we were work are not prepared to handle a low-impact scenario, let alone the worst-case scenario of COVID19 infections,” Turner says. :Seeing these limitations exposes a huge gap between need and demand for essential healthcare and its availability, like the need for better hospitals, better referrals, and more timely care. We want the future of The Okoa Project to include working towards filling this gap.”

So, how can you help? The Okoa Project needs volunteers, and while it may have started at MIT, and plenty of MIT students and staff are still involved, Turner says her organization has helpers all over the world.

“We are always looking for passionate individuals who share our belief that where you live shouldn’t determine whether you live and want to work with us to realize this vision,” Turner says. But what if your time is limited, and you can’t help out by volunteering? 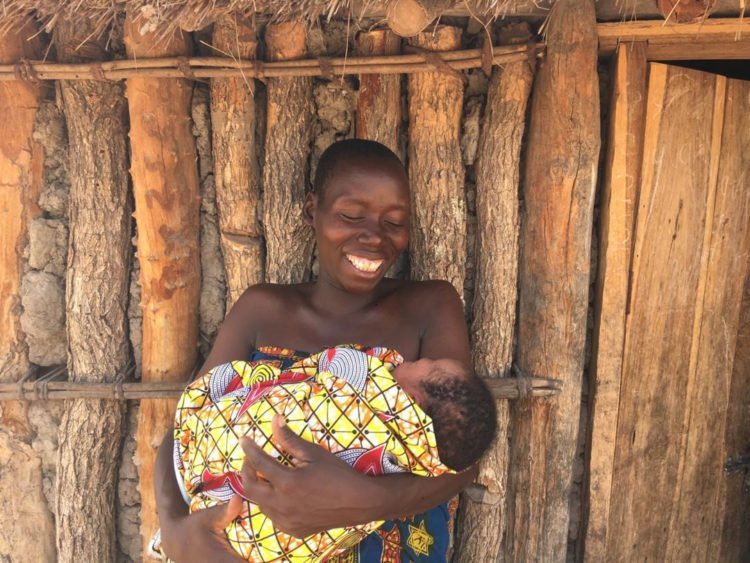 According to Turner, this woman’s name is Buke. “This photo was taken after she gave birth to her 10th child and the only one of her births to take place in a hospital attended by medical staff. She had never been able to give birth in the hospital before due to the exorbitant cost of hiring a motorcycle taxi to take her to the hospital, with the alternative being a 3 hour walk there, and no other emergency transportation available to her … Because of our ambulances, for the first time in her life Buke was able to give birth safely with the proper post-natal care for both her and her new baby.”

You can always help by giving to the Okoa Project. Face-to-face fundraising has been difficult lately, due to COVID-19, but there is a GoFundMe account set up for the group’s COVID-19 response, as well as a giving option through Classy.org. Turner says all these donations go directly to on-the-ground programming which covers COVID19 and emergency healthcare.

“We are very cost-conscious,” she says. “Our ambulances are just $2000, up to 100x less than a conventional ambulance, and up to 3x less than competing motorcycle ambulances. Just $1.50 can provide a ride to the hospital in one of our ambulances. We just want people to know that, even though plenty of organizations say this, even the smallest donation makes a huge difference; in our case, it can literally be the difference between life and death.”

Interested? Donate at Classy.org, along with these last figures:

Did you know that:

$4.50 can provide one week of rides for a community

$20 can provide birthing kits for a community

$50 can provide ambulance maintenance for a year

$250 can provide one year of rides for a community

$1200 can provide hundreds of people with emergency transport