Did you know that much of the R&D for the IMZ-Ural was done in a brewery? And that until fairly recently you could buy an accessory kit that included a plow and a harrow?

The story starts with the inter-war USSR and its dictator, Josef Stalin. Yes, the creation of the IMZ-Ural sidecar outfit goes back to the man of steel himself. Like a lot of other world leaders and military people, he got quite a wakeup call from the German Blitzkrieg that descended on Poland in 1939.

Despite the supposed peaceful relations that reigned between his government and Germany’s, he knew that there was a pretty good chance that eventually those Panzers, paratroopers and elite infantry rolling over Poland would one day be knocking at Moscow’s door, too. He would not have been happy to rely on the two great Russian military masters who had defeated Napoleon, “Le General Janvier et Le Marechal Fevrier” (General January and Marshal February – the Russian winter), either. He needed a Soviet military machine that could take on the Germans at their own game – which, above all, required mobility. And motorcycles made – and make – an Army very mobile indeed.

That’s where the IMZ-Ural outfit comes in. During the Russian Winter War with Finland, it had become obvious that the motorcycles the Red Army was using were not satisfactory.  The technology was outdated and the manufacturing quality was not able to cope with the harsh Russian climate, lack of field maintenance and appalling terrain.

So when Stalin ordered the Soviet military to prepare ground forces capable of defending the Soviet Union against a potential invasion by the Germans, new bikes were on the agenda. At a meeting of the Soviet Defence Ministry it was decided that, as so often with institutions, the best way to go was with a BMW. The bike then in service with the German army was not specifically a military model – in fact, the BMW R 71 was causing major headaches for the Wehrmacht. There were plans to replace it with the R 75 (which was in some ways more of a Zündapp than a BMW). But the older bike still matched the Red Army’s requirements closely. 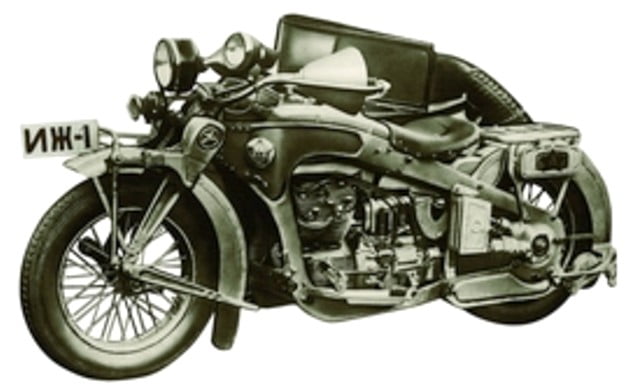 Here’s one we built earlier — quite likely the model that was superseded by the M-72.

The Russians couldn’t just go and buy the bikes. The dealer would have been happy – “Tovarich, we’ll take 10,000 of those over there, can we have them in Dark Brown Red Army camo?” The factory would have been happy as well, seeing that they were preparing to start building the R 75 and the R 71 tooling must have been well and truly paid for. The Wehrmacht, however, would not have been quite so pleased at seeing their next and possibly most formidable enemy equipped with a far from perfect but nevertheless workable German motorcycle.

Anyway, buying the bikes didn’t guarantee a supply of spares and that was just as important to the Russians as getting them in the first place. Like the Germans and unlike the Americans, who took a disposable view of their military vehicles (Jeeps were officially expected to last only three months) the Russians needed stuff that would keep going.

So they got sneaky. According to official accounts, they bought five R 71s covertly by way of some Swedish middlemen. Soviet engineers in Moscow dismantled the five bikes and reverse engineered the BMW design. They then made moulds and dies to produce their own engines, gearboxes, frames and ancillary equipment in factories in Moscow and near Leningrad. Early in 1941, the first prototypes of the M-72 motorcycle (still called the M-71 then) were shown to Stalin who liked what he saw and ordered the bike’s mass production.

There are several other stories about the origin of the M-72, but this is the only one that’s really credible. And there is kind-of direct proof of it. One of the original BMWs purchased through the Swedish intermediaries still survives (presumably it was reassembled), and can be seen on display in the IMZ-Ural factory museum in Irbit.

The Russians started production in Moscow and were soon building hundreds of M-72 motorcycles, equipped with sidecars built in Leningrad.

But there was a problem. The Moscow factory was within range of German bombers, and it would have annoyed Uncle Joe no end to have all that reverse engineering work go to waste in the rubble of a bombed-out factory. The obvious solution was to move the factory further east, out of bombing range, along with much other heavy industry. The new site chosen was the town of Irbit in the Ural mountains, on the fringe of Siberia.

Irbit was not an industrial town. The only available building that was substantial enough to serve as the core of the new factory was a brewery. It was quickly converted into a research and development building to serve the massive new factory which was to build the M-72 motorcycle. The first batch of motorcycles went to the front on October 25, 1942. During the course of World War II, a total of 9,799 M-72 motorcycles were delivered and put into service with reconnaissance detachments and mobile troops.

The factory was expanded and production was ramped up after the War, and in 1950 the 30,000th motorcycle was produced.

Originally, Irbit Motorcycle Works built bikes only for the armed forces. In the late 1950s, the KMZ plant in Ukraine took over the task of supplying the military and IMZ began to concentrate on developing bikes for domestic consumers. By the late 1950s, the plant was totally devoted to non-military production, and in 1957 the M-72 production lines were sold to the Chinese. That’s where those sidevalve, boxer-engined Chang Jiang outfits come from.

The Russian factory was by now building its own 650cc overhead valve engine. Initially, this was still fitted to the side valve plunger frame, but later the engine and gearbox were equipped with a Russian designed swing arm frame. Eventually, the 650 was superseded by the current OHV 750 engine around the turn of the millennium. Today, the factory’s main products are the various sidecar outfits, and the chopper-style Wolf solo.

Ural bikes have been sold to other countries for a long time. Exports began in 1953, at first consisting mainly military sales to developing countries. Today, the motorcycles are sold in some 20 countries including Australia, Britain, Iceland, Germany and the United States. Total production since the factory in Irbit was founded is more than 3.2 million, and I’d be prepared to bet that most of them are still running. IMZ-Ural is the only Russian manufacturer of large capacity motorcycles and possibly the only manufacturers of sidecar motorcycles in the world.

Let’s just clear up a misconception. The “other Russian” factory, KMZ, is in Ukraine, not in Russia, although they were once of course both in the USSR. The bikes imported to Australia as Cossacks (and sold in the UK as Nevals) were apparently from KMZ, and their engineering is different.

I used to own a Cossack (back when I basically couldn’t afford to scratch my backside and they were being sold by Capitol Motors for $650 – a dollar per cc) and I do not have happy memories of that bike. For one thing, its seat was the most appallingly uncomfortable one I’ve ever encountered. But who am I to argue with three million Red Army motorcyclists?