While Zac’s off gadding about Labrador, he’s sent in a tale of a rip to Nova Scotia’s Cape Breton Island earlier this spring, his first moto-trip of the season. By the sound of things, it would have been smarter to wait a couple more weeks to hit the road.

Rain in my visor, along with a mix of run-off and muck spewed from the tires of the transport truck in front of me. The DR650 handling turning twitchy with all the weight on the back. A mostly unfamiliar, twisty road, great in the dry but sketchy in this slippery fog. The creeping cold creeping back into my core.

Maybe I should have postponed this trip another week.

The date was May 22, and I was finally back on Cape Breton. 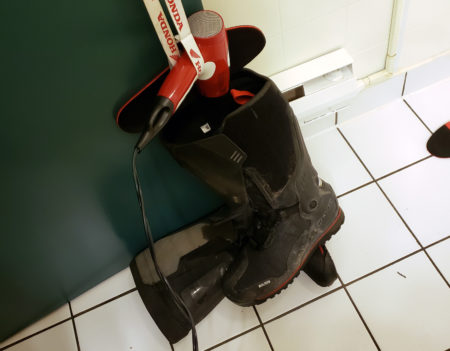 There’s nothing like the fun of trying to dry your gear out with a motel hairdryer after riding through hours of cold rain.

Why go back to Cape Breton? Unfinished business, that’s why.

This time, I was taking a dual sport that theoretically should give me the best of both worlds.

The trip had started the day before, at my home in Saint John, New Brunswick. I was on the road north by lunch, super-slabbing it all the way through Sussex, Moncton, Sackville, until I hit the Westville exit.

I hate the four-lane highway, and I especially hate it when I’m riding my 650. But on that day, it was the best choice as I was short on time. The endless driving rain would have sucked the fun out of all the back road routes, anyway.

In Westville, I met up with Daniel Ross, aka the Cabot Trail Biker. Daniel’s a local businessman who, among other things, sells merchandise themed around the Cabot Trail, the well-known secondary highway through the northwestern side of Cape Breton. I owed him a major favour and said I’d deliver some stuff to Ingonish for him. I’d left space on the rear rack when I was packing, but handling still got pretty sketchy due to the weight. By the time I rolled into the Cove Motel just before the Canso Causeway to Cape Breton, I was glad to be off the bike and into the tub, where I lay for about 45 minutes, trying to drive the chill out of my bones. I’m used to cold weather riding, but the long day on the highway combined with suddenly-leaky gear had really gotten to me.

The next day, I kicked open the motel room door to see no rain, yet. The low-hanging cloud cover over the island just across the strait was scenic, but I knew it’d be a soggy start to the day. Thankfully, my gear had dried. 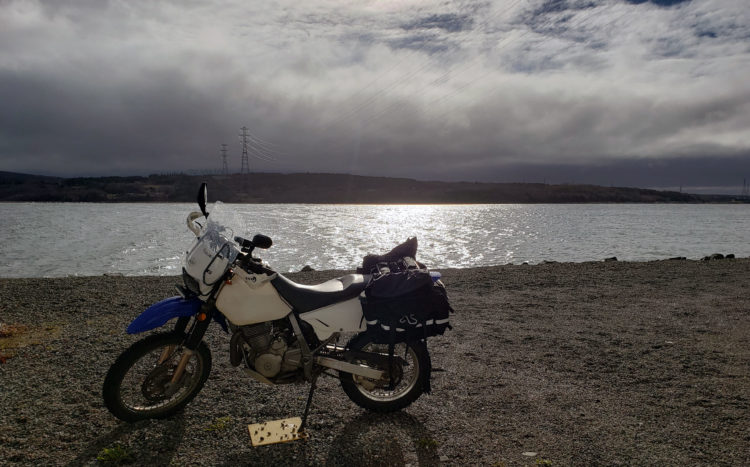 Sure, the sun was shining on the mainland side of the Canso Causeway, but check out those skies over Cape Breton Island.

Unfortunately, as it was the off-season, the motel’s dining room was on restricted hours, closed when I wanted breakfast. I opted to just beeline north instead of looking for food elsewhere. With the extra weight on the bike, I knew the ride would be unpleasant, and I just wanted it over with. At this point, it was almost 24 hours since my last meal, but I just wanted to get going.

The Island’s main highway up the middle, Rt. 105, was dry, if uninspiring, but I could see dirty weather ahead. At my only stop, for gas and a coffee in Baddeck, I didn’t see a single other motorcyclist, at a spot where there’d be constant two-wheel traffic on a nice day. The sloppy weather started when I exited the highway at the Gaelic College just outside St. Anns. This twisty back road is considered by many to be the “real” start of the Cabot Trail. Though it doesn’t have the elevation changes or switchbacks of later sections, it proved to be quite a challenge at this point. I was basically unable to see, and the bike wouldn’t do what I wanted it to. And of course, the cold Just. Wouldn’t. Go. away. 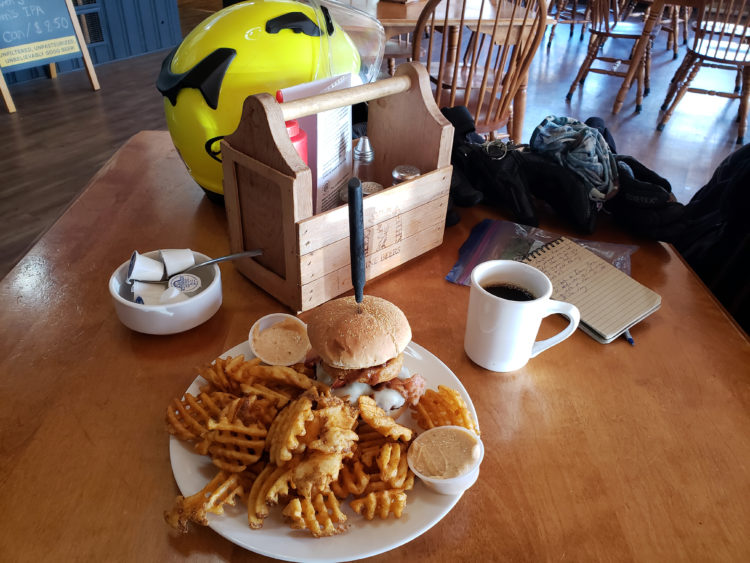 Due to rain and misery, no roadside pictures from the start of the day, but here’s a delicious lunch at the Coastal. Nothing like a few cups of coffee to make the day right!

The worst part was that I actually had a heated jacket and heated grips, but suspected my DR’s charging system wouldn’t run them both for extended periods of time. Every few minutes, I’d switch on the jacket, and leave the grips blasting on high. This was enough to get me to the Coastal Pub and Restaurant, where I was able to drop off Daniel’s package and shovel enough food into my face to beat off hypothermia (a highly recommended stop, by the way, not just because it’s great food, but because it’s the only outfit selling Daniel’s Cabot Trail Biker T-shirts).

(Lunch thought: there’s nothing more comforting during a cold day’s ride, than a stop with a mug of hot coffee to warm your hands).

I knew my night’s accommodations were close by, and given my physical state, figured I’d just check in early and dry out. But as I left the restaurant, the clouds cleared, and I thought, “Hey! The sun will dry my gear out! Time to hit the road!” And so, instead of heading south and calling it quits on the day, I headed north. It was time to visit Meat Cove. 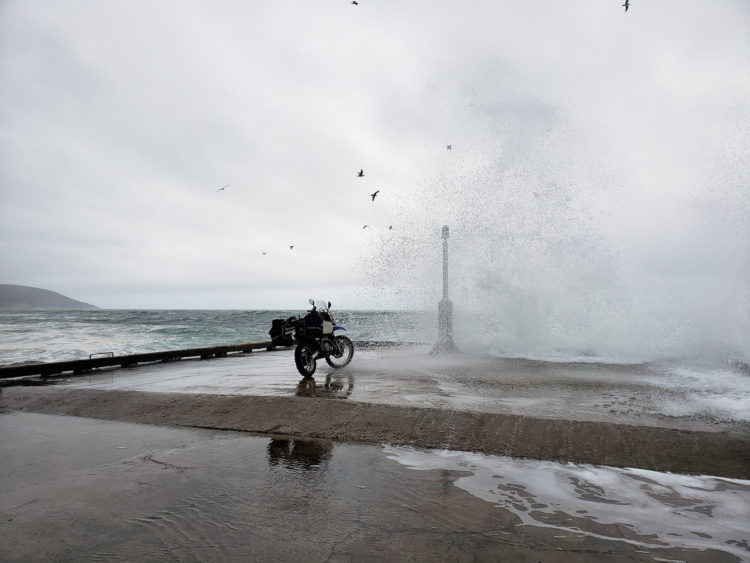 The seas were crashing over the government wharf at Bay St. Lawrence. Nobody was fishing lobsters today.

This leg of the Cabot Trail, north out of Ingonish, is very scenic for the first few miles, with the road cutting along the cliff’s edge. The corners are fairly unintimidating, but the views are as good as it gets in Atlantic Canada, and there are many pullouts for photo stops.

Going this direction means you’re riding the Cabot Trail counter-clockwise, and as you head inland from the Neils Harbour turn-off, the road isn’t as great. Trees dominate the scenery, and the pavement straightens out. But soon enough, you’re at Cape North, where you can get gas and turn off the main road shortly afterwards, heading towards Meat Cove. 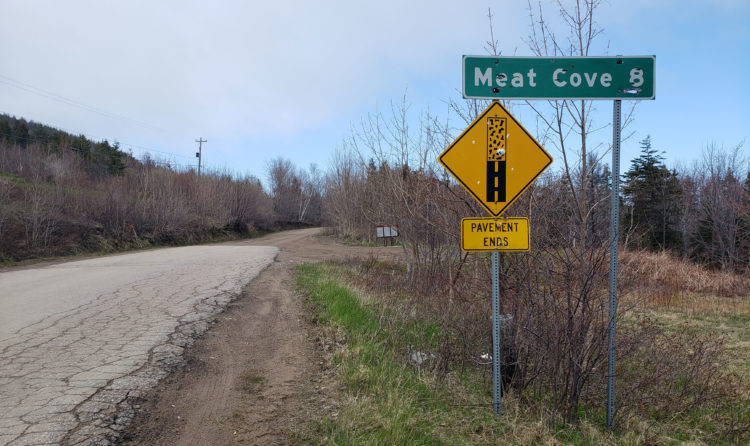 The 30ish-km road to Meat Cove is twisty, secluded and scenic. It’s what every motorcyclist wants from the Cabot Trail, wrapped up in a half-hour package. I rode past a few houses, but saw no real signs of population until I encountered Bay St. Lawrence.

The boats were all tied up in this tiny fishing town, with a monster swell driving the surf right into the harbour. I snapped a few photos, and left. As scenic as it is, I had places I wanted to be.

Shortly outside Bay St. Lawrence, the road turned to dirt. The rest of the way to Meat Cove, I encountered no traffic. I didn’t see anyone at the few shacks along the way. The views were pretty, but nobody was there to take them in. Meat Cove itself, at the end of the road, was deserted, except for a car of tourists hobbling around with cameras.

Who lives here? How do they put food on the table? There’s no visible industry of any sort. There’s a campground, but nobody running it. Same goes for the shuttered chowder house. I ran my bike down to the beach and looked up into the foggy hills, wondering if I’ve encountered a hobbit outpost and scared everyone away. I looked out to sea and shuddered at the thought of all the mariners who wrecked here, on the rocks just off of Nova Scotia’s northernmost community. 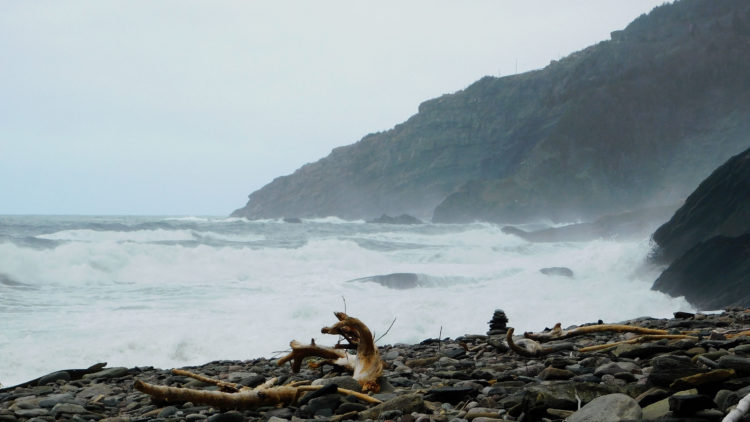 Heavy skies and a swelling sea at Meat Cove. I can’t imagine how people survived here after wrecking their ships on the coast.

But the sun came back out again on the ride back to the main road, and my mood lifted again. The corners were more fun now that I’d dried out and warmed up.

I hit the legendary downhill switchbacks on Cape Smokey as fast as I dared, then rolled into my night’s groovy digs, the cabins at the Dancing Moose Cafe. I cranked the cabin’s heat, unloaded my panniers, and fell asleep upstairs by the cabin’s window, only to waken hours later with a brilliant full moon in my eyes. There are worse reasons to wake up.

A hip on-site cafe, that was closed when I got to my accommodations. Bummer. But the cabin was exactly what I needed.