While Zac’s off gadding about Labrador, he’s sent in these stories of a trip to Nova Scotia’s Cape Breton Island earlier this spring.

Thursday dawned chilly, but finally sunny. I wanted to hit the road quickly, but breakfast at the Dancing Moose delayed me (delicious Dutch pannekoek!). At least the air had warmed up considerably by the time I’d stuffed my face, repacked my luggage and tightened down all the loose bolts on the DR650.

The goal today was to ride the Cabot Trail in both directions and sneak in a side trip or two down dirt roads if possible. After all, that’s why I brought the DR650. 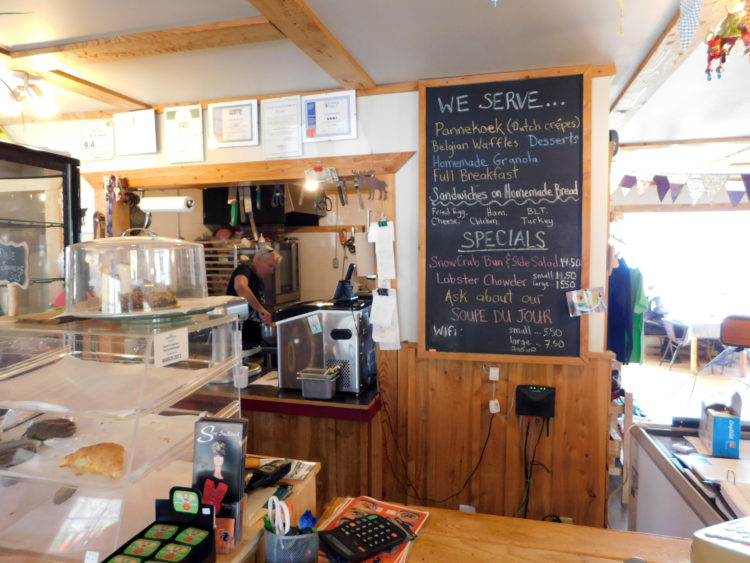 If you get a chance, get the pannekoek at the Dancing Moose cafe. Not every place in Cape Breton is about Celtic or Acadian culture!

I headed north again, counter-clockwise on the Trail; by now, I was starting to build a mental map of the sections around Birch Cove through Ingonish, from my up-and-down run to Meat Cove the day before. Combine that with dry pavement and warmer temperatures, and I was able to finally set a speedier pace – until I hit construction. Alas, the much-anticipated rip up Cape Smokey was torpedoed by a highway maintenance project. They hadn’t been working the day before, due to the weather.

The region’s lobster fishermen hadn’t been working the day before either, but as I cleared Ingonish, I could see dozens of the small boats off the cliffs, all running buoy gear (a single trap to a buoy, instead of trawls, or multiple traps to a buoy). Their traps appeared to all be set on top of each other, yet somehow they were able to navigate through the tangle to haul their own traps to the surface, remove the lobsters, change the bait, then cast it off the washboard to bottom again.

May is still a little early for visiting the Cabot Trail, but at least there aren’t many tourists to get stuck behind. But everything is still dead-looking and cold at this point.

Gunning the 650 along at high revs, I thought about the big difference a road can take, only by running it in a different direction, or in different weather. I’d run the Trail before, but only clockwise, and now I was rediscovering the road.

Houses are few and far between along the top of the Trail. When this area was settled, before the paved government road went in, it would have been a difficult place to live, with no major waterways to enable transportation. Even now, the Cape Breton Highlands are the first place in the Maritimes to see snow each fall, and the Trail’s more remote sections are often impassible. But surely, that wouldn’t be an issue in late May, right?

Uh, wrong. I’d narrowly missed snowfall the day before, and I suddenly encountered pavement stained with road salt. The temperature fell as I climbed North Mountain, and no wonder. There were still massive snowbanks beside the road. Thankfully, there were no slippery spots on the road, but the sight of the icy ditches made it hard to commit to high-speed cornering in the bends along North Mountain. I dialed the throttle back, and once again grimly switched on all my heated gear. 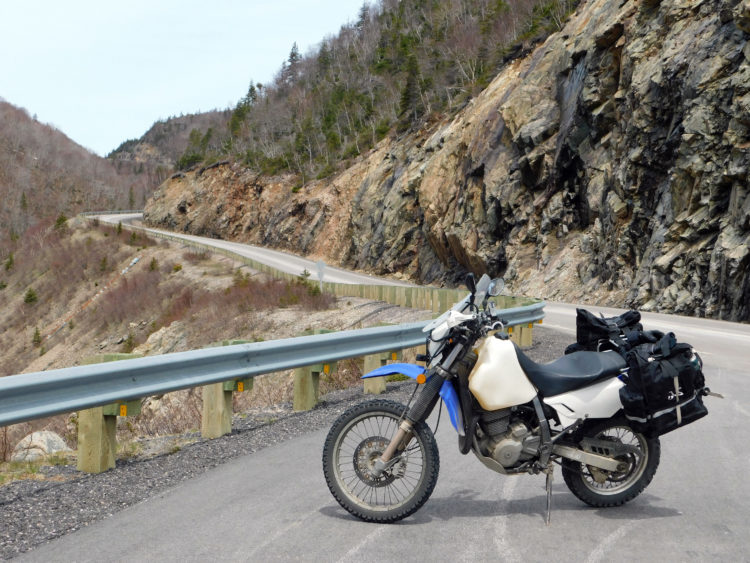 No snow in the lower sections of the Cabot Trail, thankfully.

Up, down, up, down, around the corners and up and down. The riding got better and better as I cruised towards Pleasant Bay, and as I left the hilltop snow. The corners in the last stretch before Cheticamp were most definitely ice-free, and I picked up speed again. I was warm, and once more in my happy place, riding along the only real cliff-edge riding you’ll find in northeast North America, beautiful ocean scenery to my right and the rocky crags to my left. Wreck Cove’s tight switchbacks were a whole new experience, as I’d never run them this direction before. Finally, this trip was going right!

Bob Dylan was playing on my Sena as I rolled into Cheticamp, with The Band backing. Garth Hudson’s ethereal organ work matched the ocean mist perfectly, as Dylan mumbled lyrics about building big ships and boats.

He might well have been describing Cheticamp, a fishing town that’s transformed into a money hub. The government wharves are crowded with oversized fishing vessels. Cheticamp’s an interesting town, as it’s a major Acadian centre in an area best-known for its imported Scottish culture. And most importantly for me, it has an excellent restaurant, the Gabriel, where I pondered my day’s plans over late lunch. 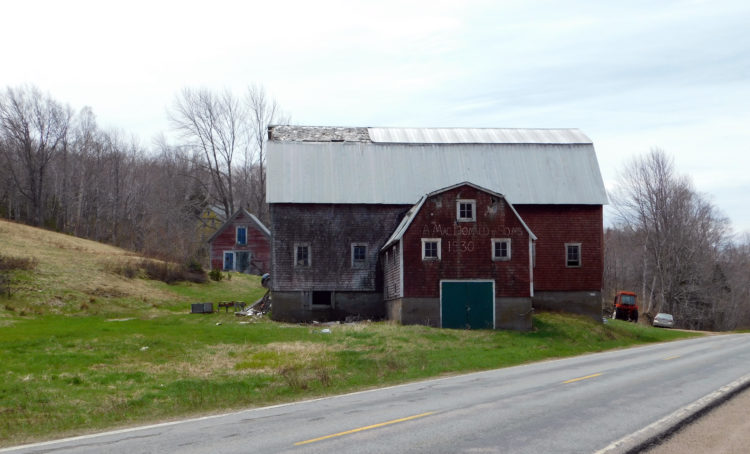 How did people survive in these mountains before the paved government road went in? Even now, people living in the Highlands must be very self-sufficient. There’s a reason there are few houses up here.

I really wanted to ride the Trail in both directions, but figured a complete loop through the Margaree area would leave me too short on time. The thing to do was take a short hop down to Grand Etang, check out the harbour, and head back the way I came. From there, I’d burn down to my night’s accommodations in Mabou.

Alas, dirt road exploration was not going to happen today. No worry, there was always tomorrow.

But on the return journey, I had a nasty shock as I checked over the bike at a gas stop. I’d figured I’d have about a thousand kilometres of life left on my rear tire when I got home, but looking at it now, it was already worn out. Bummer! That was going to take the fun out of any gravel roads. But I couldn’t do anything about it then and there, so I remounted and headed south. At least I wasn’t worried about ice on the road now, as I’d made it through safely earlier, so I was able to lay the hammer down. 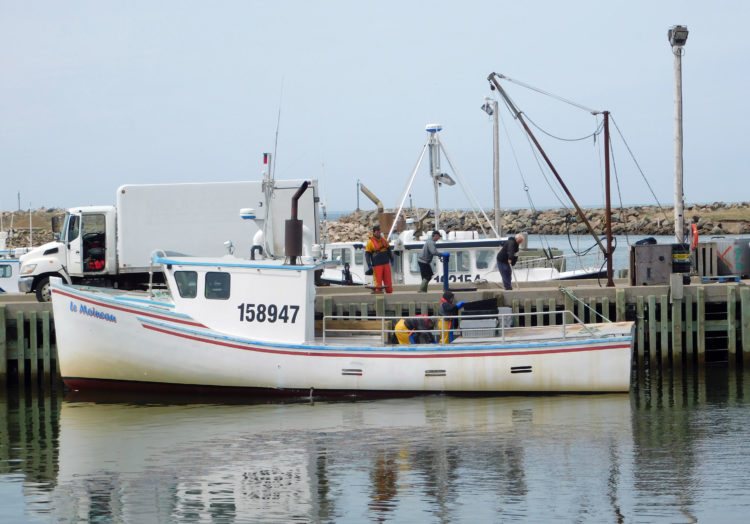 It’s mid-day, but these fishermen are already unloading their catch, having hauled their traps in a mad early-morning rush after the previous day’s gale.

Earlier in the day, I’d been loving the chance to experience the Cabot Trail from a different perspective, but now, I was loving the fact that I’d been over this road enough to finally learn the good sections from end to end.

The section along North River, the same road I’d teetered through the day before in the rain with an overloaded bike, was now totally dry. At this point, I was really feeling my oats, pushing the DR as hard as I dared, emerging at the 105, where I headed south again, to take the turn-off leading along the bottom of Lake Ainslie, to my destination in Mabou.

By now, the long day in the saddle was getting to me. It was getting dark, and the road was unfamiliar again, so I dialed my speed back. Good thing, too. On one tasty 90-degree bend just before Mabou, the kind of corner you’d be tempted to really push it through, a semi headed my direction took up the entirety of both lanes just before I entered the corner. If I’d been riding like a hoon, it would have meant my life. That sobering thought was enough to convince me it was time to retire for the night, with a leftover piece of pizza from the Mabou River Inn’s restaurant. (Why, oh why could I never arrive before the restaurant closed?) 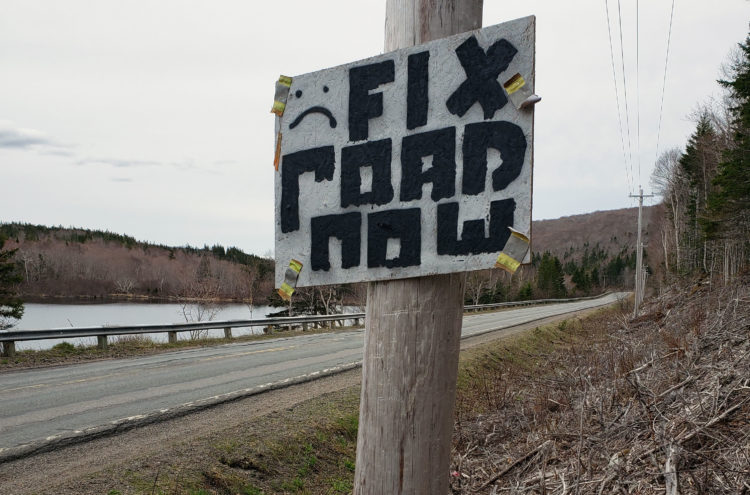 Parts of the Cabot Trail are still pretty bumpy. The stretch along the Margaree River has several signs showing the locals’ discontent.

Friday morning, I found a new tire at Mackenzie Motorsports, the only motorcycle shop on the Cabot Trail. It was the second year in a row that Jim Mackenzie bailed me out. The year before, he’d installed a tire for my riding partner when we found his Honda had burned its rear off. Hrm. Must be something about the roads up here.

Before I left Cape Breton, I had one more stop: the Red Shoe Pub in Mabou. It was the first day of the season for the Red Shoe Pub. It’s Cape Breton’s most famous restaurant, as it’s owned by Cape Breton’s most famous musical exports: the sisters of the Rankin Family. They weren’t around, but the walls tell the tales of their career. Show up here any evening of the week, and you’ll hear the next generation of Cape Breton musicians carrying the area’s musical tradition on. 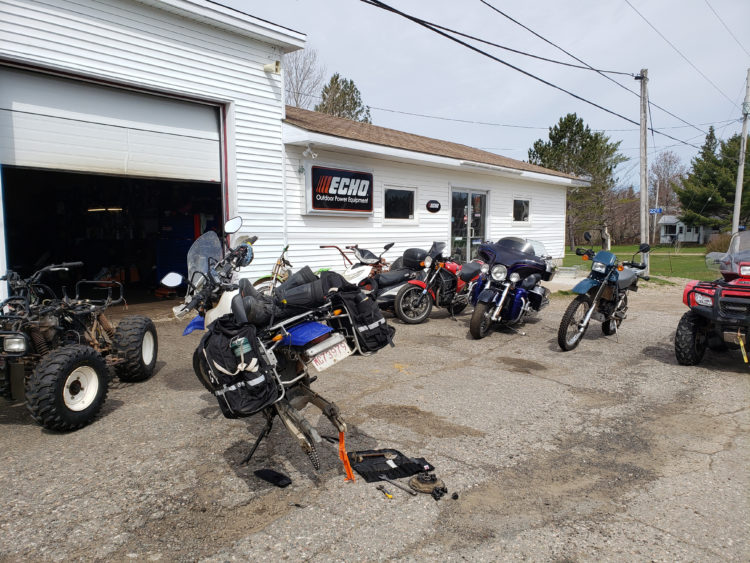 And this, ladies and gents, was the end of my plans to go dirt road exploring. At least Mackenzie’s was able to bail me out with a new Shinko 705.

And then it was off to the superslab, home to New Brunswick, mile after mile of the 650 rattling away underneath, passing other motorists, having them pass me, passing them again, until I hit New Brunswick.

As always, the problem with a trip to Cape Breton is that it’s a long way to get there. But at least I had time to think about all the fun I’d had, and all the fun I hadn’t had. The previous day’s riding had been fantastic; even the stretch through the freezing-cold mountains had been dry and sunny, at least. And even though I’d spent the entire morning getting a new rear tire fitted, I’d at least seen the beautiful Margaree Highlands and checked out some new roads. I’d been able to explore, and that’s an important part of every motorcycle trip.

But, sadly, I hadn’t found the time to get down very many gravel and dirt roads. I’d been wondering about several routes I’d seen on snowmobile maps, and wanted to check ’em out. But hey, that just gives me another excuse to visit again soon, right?

Thanks to the Cove Motel, Dancing Moose and Mabou River Inn for their accomodations. The Cove is a great spot to start your Cape Breton ride from, located just off the Canso Causeway, and they’re very motorcycle-friendly. The Dancing Moose not only has excellent on-site food, but the cabins themselves are reasonably priced, and the view from the beach is gorgeous. And as for the Mabou River Inn … best breakfast coffee I’ve ever had in a hotel, period (rest of the spread was pretty good, too!). Check ’em out!