As of the date of this article, the Sturgis Rally is still on.  The event dates are currently August 7th through August 16th, 2020.

According to the Black Hills Pioneer, the Sturgis City Council held an “emotionally charged” meeting to take comments for and against holding the 80th edition of the Sturgis Rally.    More than 100 people attended and approximately two dozen offered comments.  The speakers ranged from “bartenders to nurses, and campground owners to retirees.”

One resident said she thought it should be the responsibility of the city government to look out for the health of its citizens.

It is my deepest conviction, and I have relayed that to all of you, that this is a huge, foolish mistake to make to host the Rally this year,  Postpone it until next year.  Have a big one next year.” 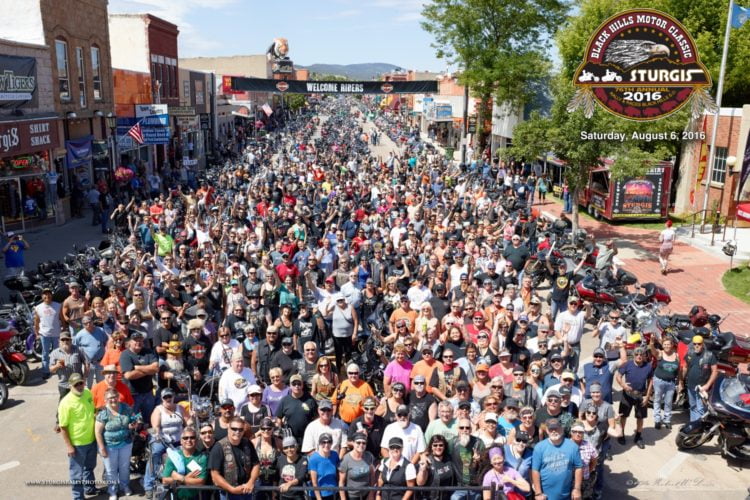 A photo of attendees in 2016. Photo credit: sturgisrallyphoto.com

But a longtime Sturgis businessman said that closing down businesses in town as Coronavirus spread in other areas of the country may have been an overreaction.

“I think canceling the Rally would probably be the biggest overreaction that we could possibly make.  Anytime a decision is made based on fear, on emotion, based on wishful thinking, you are not going to have a good decision. When in history has a good decision been made because of fear?”

The Rally must go on

A former Sturgis City Council member, business owner, and president of the Sturgis Rally Charities Foundation said she empathizes with the current board.  “This is not an easy decision to make.”

So it’s clear that there are very differing opinions about holding Sturgis this year.  Ultimately, the Sturgis City Council voted 8-1 to “allow” a toned-down Rally.  The Council will allow vendor permits, space, and make Main Street “motorcycle only”.  However, there will be no opening ceremony or any organized entertainment or events at Rally Point.

The City Council has also voted to make COVID-19 test kits available to frontline worker residents after the event is over.  The council says that they are waiting until the event is over to ensure that only residents receive the free tests.

What do you think about the Rally being held this year?  Is a “toned down” version of the Rally an acceptable solution?  Is the City Council doing the right things?  Let us know what you think in the comments below.