Although it’s got some of the most interesting retro models on the market, Moto Guzzi only had a handful of them on display at IMS this weekend. That’s too bad, but the one bike that matters the most was there, at least: The V85 TT Travel.

The Travel is the street touring-oriented version of the V85, just unveiled at EICMA. Moto Guzzi had the V85 TT Adventure on display next to it, and it was interesting to compare the two machines side-by-side. 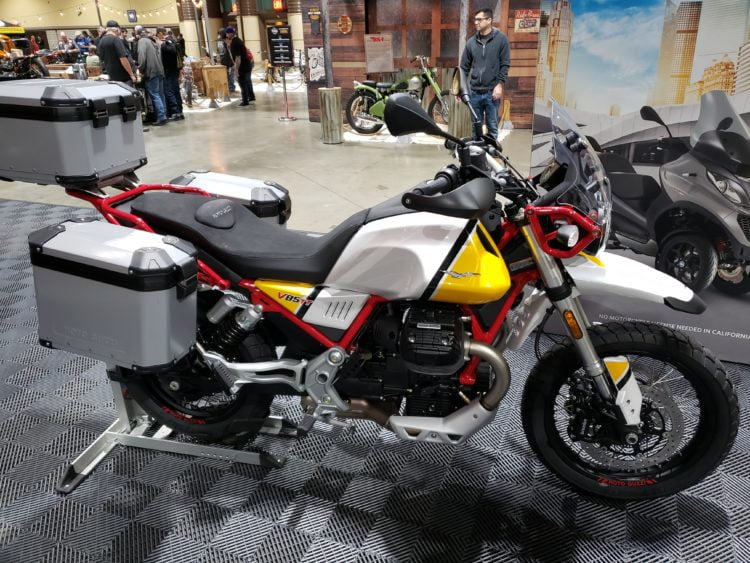 Compared to the Travel version, the Adventure has a more rugged look, smaller windscreen, and the panniers are aluminum. Photo: Zac Kurylyk

The V85 TT has the lines and look of an older rally bike, but really, it’s aimed at street usage, with very mild tootling down gravel tracks and other sensible off-pavement areas.

The Travel is more realistic about those capabilities, with a massive windscreen and decently large saddlebags that just look like the hard luggage off a street bike, without the rivets and shiny aluminum that ADVers associate with rugged off-road capability.

The Adventure, well, it has those more rugged-looking bags, along with a smaller windshield that would definitely be preferable for bashing about in the bush.

Here’s the larger bags off the Travel. They’re definitely not as tough-looking. Photo: Zac Kurylyk

These panniers on the Adventure version look the bit, although they probably aren’t that much more rugged than the Travel’s bags. Photo: Zac Kurylyk

But, take a step back and look at both bikes, and you’ll see they’re really basically the same machine. The seat, the ergos, the skid plate, the tires, it’s all basically identical, and the Travel really just has a different street-friendly touring package than the Adventure has.

Having said that, both bikes have fantastic lines, and would certainly be more fun on a maintained forest road than, say, a Gold Wing or a Road King. They may not have a lot of dirt capability, but they’re a much better option in the bumpy stuff when compared to a street machine.