“And all around is the desert; a corner of the mournful kingdom of sand” – Pierre Loti

It’s only 12km long, but it has 60 corners and a surface of smooth cement, carefully poured with traction in mind and climbs more than 1000m from the Arabian desert floor. It was built by German road specialists Strabag International, for the Emir of Abu Dhabi.

The Emir is apparently a keen driver. He has a small palace at the top of Abu Dhabi’s only mountain, Jebel Hafeet, and since all the other roads in the Emirate are straight, it seems he decided he wanted a road with curves up to his palace. Hence the Jebel Hafeet Road. Local motoring journalist Kevin Hackett says that “viewed from the air, it looks like the world’s most technical grand prix circuit.” I haven’t seen it from the air but I have ridden it – repeatedly – and while I don’t know much about GP circuits, I know a great road when it spools away under my wheels – in this case those of a BMW K 1300 S. 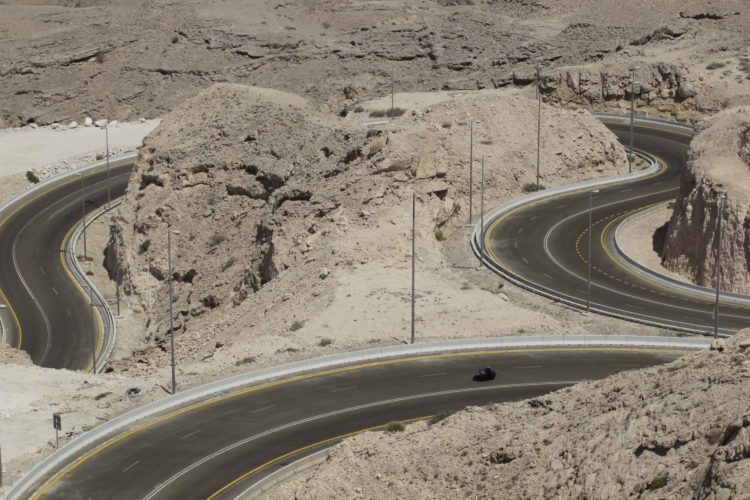 I can imagine the road’s designers cackling madly into their beards as they deployed the French Curves.

How did I find this esoteric road in the first place? I was researching a book to be called “Great Motorcycle Roads of the World” which I hope will still happen one day. To compile the list, I asked my readers to nominate their favourites. The criteria I laid down included a decent road surface, good corners, impressive scenery. But beyond that, the road needed to have a special, unquantifiable magic. This road rated high.

Trips to places like Abu Dhabi just to ride a road aren’t usually within my price range, but it turns out that them that asks, gets. I told Etihad, the Emirate’s airline, about my plan to ride Jebel Hafeet and they offered to fly me there and, more importantly, back. I asked BMW Motorrad if they’d lend me a bike and they agreed. It was set.

The 170-odd kilometres from Abu Dhabi to Al Ain at the foot of the mountain would rate as one of the most boring stretches of road in the world, just as you’d expect in a flat desert with not even very many camels. But once you get to The Road, things change. Dramatically. It’s popular on the weekend with locals who run their Italian sports cars and hot Minis up and down, but during the week it’s empty. It was all mine.

Most of the corners are generous enough so that even a bruiser like a K 1300 can take them at speed, and they are set beautifully one after the other so you don’t need to throttle off as you flip from side to side. Well, until you reach one of the cunningly placed hairpins where you discover that yes, Mr Motorrad’s finest will scratch – literally. 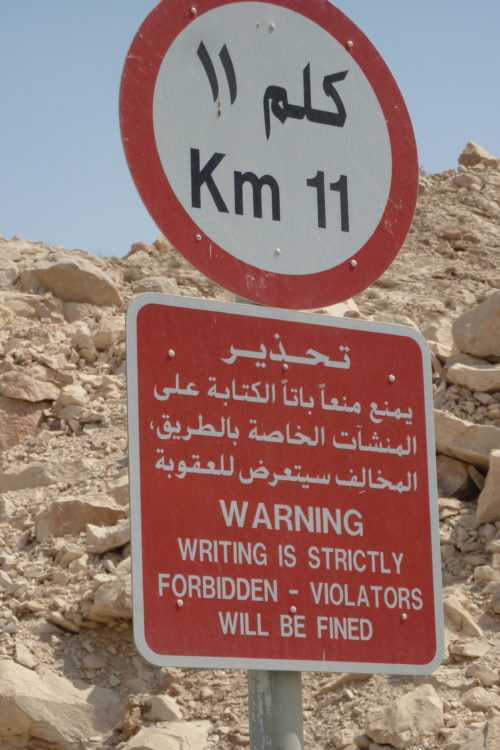 It means graffiti. And the penalties are… draconian.

I arrived mid-morning and spent the entire rest of the day learning the mountain. Etihad had kindly booked me into the hotel near the top of the mountain, and when I eventually pulled in there and checked the bike’s dash, I discovered that I’d been riding in 45°C. Top marks to BMW’s AirFlow suit; I’d hardly raised a sweat, and that was mostly from terror. There are sheer drops along the entire route, admittedly mostly blocked off with concrete barriers, and enough hairpins to build Marge Simpson’s hairdo. Check a map online for its sheer drops and serpentine twists and turns. 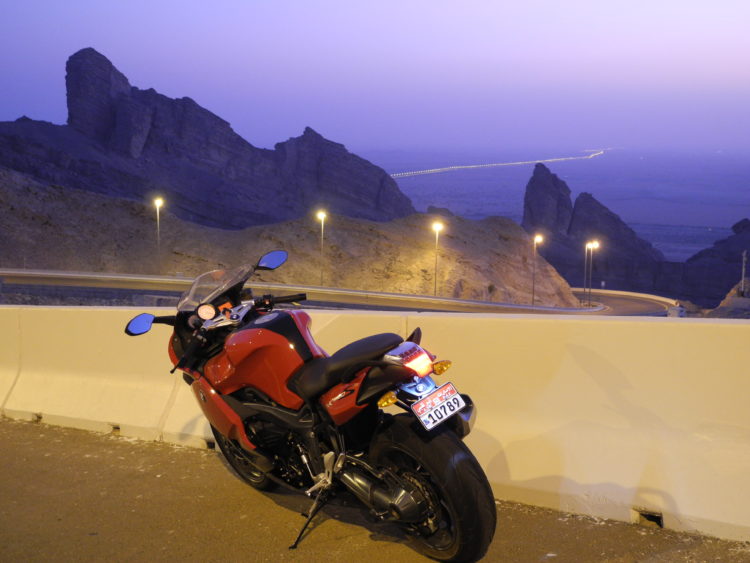 After dinner I couldn’t help myself and did a couple of runs in darkness. We, not really in darkness because the entire road is thoroughly lit by sodium lamps. Day or night, this is the motorcycle road par excellence. I stopped at the top, just below the Emir’s palace, where there’s a parking lot. The nigh-time view is eerie. Bright, dotted yellow lines spear straight out across the black desert in every direction. These are the main roads, all of them lit all night. And if you think that’s over the top, consider that most of the lines consist of parallel pairs; one is the main, six-lane highway; the other is the truck road, a couple of hundred metres away. Heavy vehicles are not allowed on the highway. 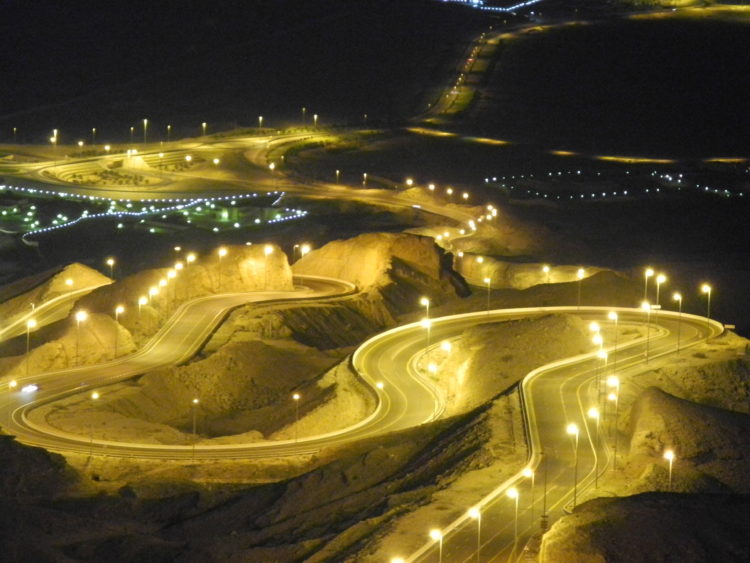 Next day, photographer Jorge Ferrari came down from The National newspaper in Dubai with Kevin. Yes, I’d been practicing that first day so I could give him a few good shots – I don’t mind admitting that I’m no gun. But the Jebel Hafeet Road made me feel almost as if I could mix it with the good boys. 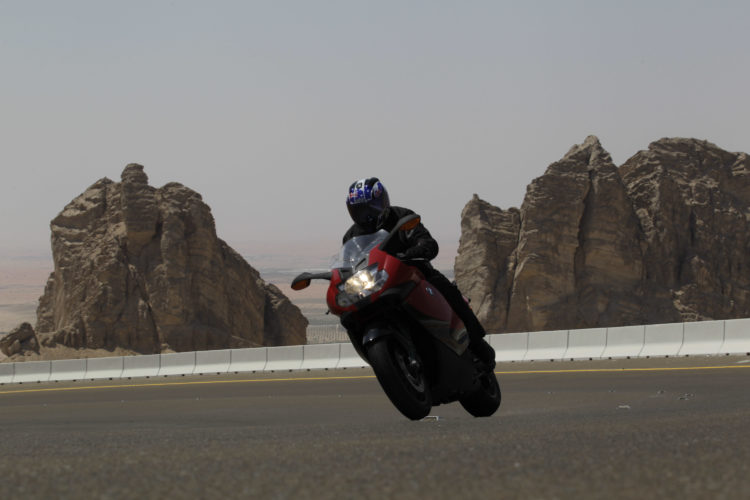 Just hooking into one of the longer corners.

You can ride this road any way you like, there’s nobody to call you soft because you’re slow. But you won’t want to be slow. The road gets into your brain, your reflexes. Up is easier than down because of those twin lanes, but down is scarier and heaps more fun of the heart-in-mouth kind.

For my money it’s the best bike road in the world. Later this year I’ll be riding the Transfagarasan – the Top Gear crew’s pick (for driving). I’ll report back. Meanwhile, what are your nominations?