Forgive me for raising the spirits of the past, but there is only so much advantage I am prepared to take of my privileged position in these days of the virus. Privileged position, you say? Oh yes. I am a professional motorcyclist, you see. Not a racer or a development rider, just a motorcycle journalist. It gives me the ability to ride during the lockdown – I am working, you see. The lockdown may not be so serious where you are, but it’s pretty comprehensive here in Australia. Shopping, medical reasons, education and – work.

So I do go for a ride every couple of days, a longer one than I would be allowed to take if I were only going shopping. But I’m still stuck in my little home office most of the time, and my mind turns to the past. I think about stuff like… what did we carry by way of tools when we went travelling?

This is back in the day when new motorcycles cost a thousand dollars and motorcycle clothing consisted of – well, the clothes you wore every day, augmented by some pair of gloves that you’d found in the back of the garage. Marlon Brando leather jackets were the latest thing if you could afford one, and the only sartorial accessory you’d add to your gear for serious travel was a pair of lambswool-lined flying boots.

Did you have those in the US? In Australia in the 1960s I think they were Army or Air Force surplus from the Second World War. 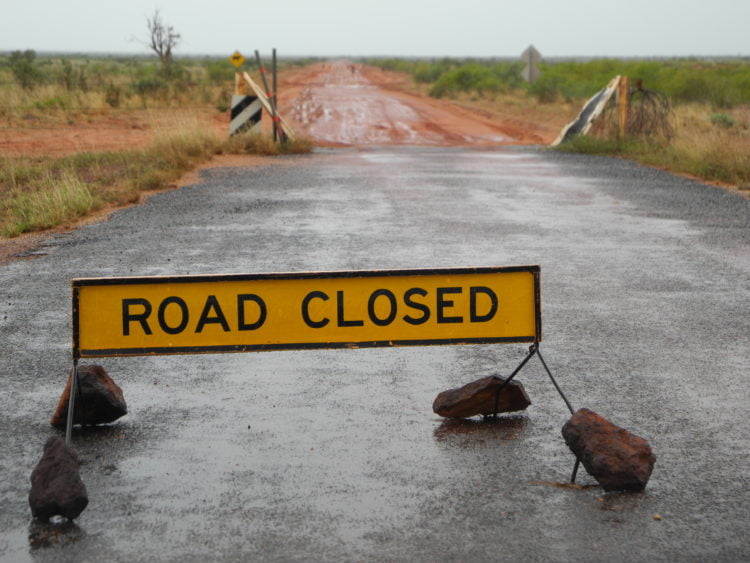 Just like anywhere else, you need to ride to the conditions in Australia.

Just like today, you would start with the toolkit that came with the bike. Wonder of wonders, that kit was precisely the same as the one you get today. I suspect that the manufacturers ordered several million of these, to be delivered over the next few decades. “Tick that one off the list (in Japanese), let’s see what else we need: oh yes, how about several million pairs of cheap tires…”

Tubeless tires were unheard of, of course, as was the obviously risible idea of a tire designed specifically for a  particular model of motorcycle. The arrival of Trials Universals was generally hailed as the best thing since, ah, tires with air in their tubes. Sadly, tires without air in their tubes were an all too common occurrence. (Wait for it, here comes the first ‘you young fellas today don’t know how good you have it…’) You young fellas today don’t know how good you have it with tires that tend to stay inflated for an entire trip of a few thousand kilometres. That’s a relatively new experience. Probably the first thing you would add to your toolkit in those days would have been a tire repair set, usually one intended for bicycles because nobody made any other kind. Contrary to the name, this was actually intended to fix tubes; repairing tires was possible, but usually left to specialists. 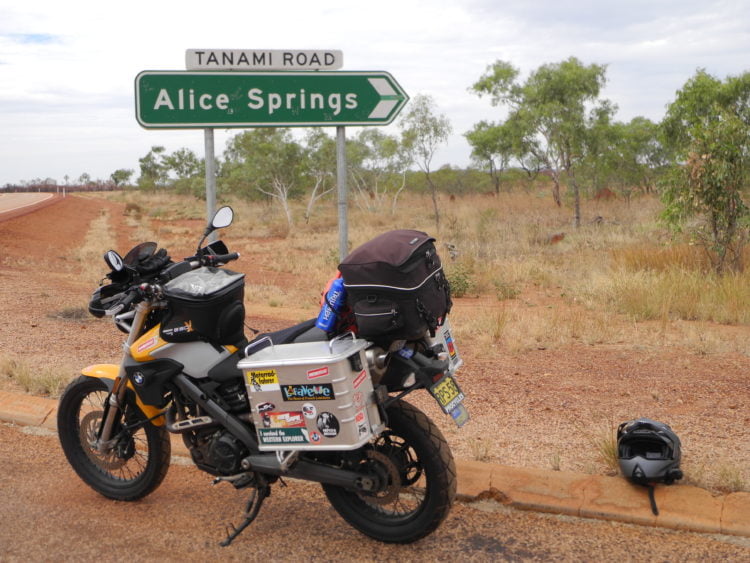 That would be 171km to the next fuel, and then another 750km to the fuel stop after that.

Having said that, I did know a couple of blokes who would happily (well, perhaps not happily) repair cracked sidewalls or gaping holes in the tread, by the side of the road. Sometimes with pop rivets. They mostly rode outfits and carried enough tools to rebuild a (Australian reference) River Class frigate. To give you an idea of their capabilities, consider the experience of one of the riders on his way to the Rabbit Flat BMW club rally on the Tanami Road. (Look Rabbit Flat up on Google Maps. It has a population of two.) His bike suffered terminal failure of the hardening on the end of one of the pushrods, way out along the Tanami Track (it wasn’t a road then) at least 450km from the nearest source of spares.

He remembered seeing the wreck of a Holden sedan a few kilometres back, so he walked back carrying his tool bag and extracted a pushrod from the car’s rusty carcass. Back at the bike, he found that the rod was too long, so he hacksawed (memo – add hacksaw to tool kit) a piece out of it. He then found a screw in his box of miscellaneous spares (memo…) and hacksawed the head off that before aralditing (memo…) it into one of the pieces of pushrod. He then pushed the other piece onto the end of the screw and, at the correct distance, araldited that in place as well.

He brewed up some tea and sipped it comfortably while waiting for the Araldite to set. Then he replaced the stuffed pushrod with his newly manufactured one, reassembled the bike and fired it up. He arrived at Rabbit Flat a little later than he’d expected to, but he did arrive and made his way into BMW riders’ folklore. Actually, he was there already for any number of other feats. I wish I could remember his name. Something The Dutchman? 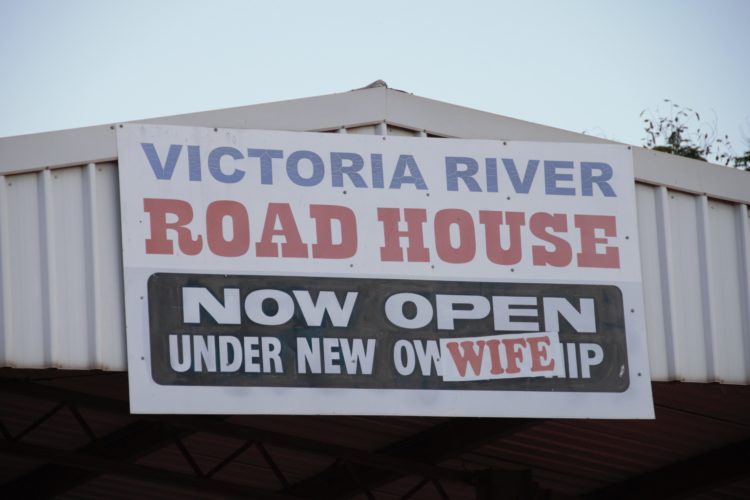 Roadhouse operators are known for their sense of humour. Well, some are.

Fixing a flat tire posed little difficulty but a lot of effort. Flats are usually at the back, for reasons often (but not convincingly) explained. So you would need to remove the rear wheel, being careful of the chain and of the correct order of all the washers and spacers, and then break the tire’s bead. You’d extract the tube and find the hole – although that is rather too simplistic a way of putting it. Holes were not always easy to find. When you did, you’d check that the cause of the hole was no longer in the tire – a wonderful opportunity to slash the end of your finger on the cause of the flat as you felt about inside the carcass. 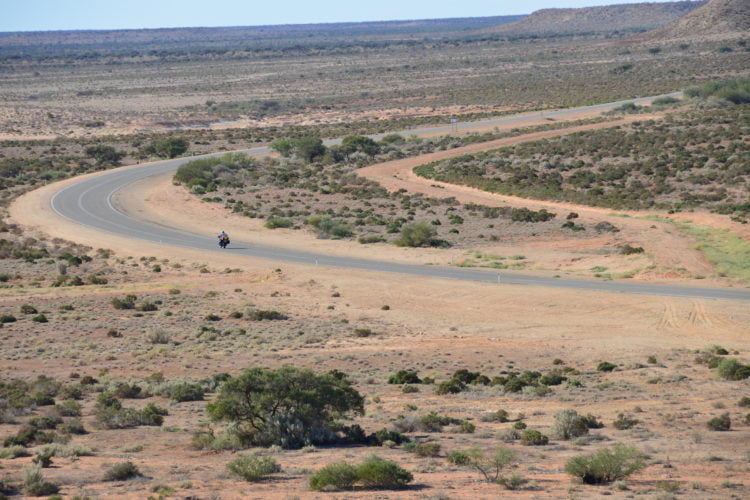 It’s a long way between drinks in Australia, even on the tar.

Having found the hole in the tube (and, if you were smart, having checked that there was only one) you would clean the area around it, roughen it with the little cheese-grater type thing inside the repair kit and finally cover it in rubber solution. You’d peel the backing from the adhesive side of a patch and apply that. Then you would apply the clamp over the patch and light the vulcanizing pad to heat the glue and set it. You would need matches, but there was no need to carry those specially because everyone in those days smoked. You would then have an opportunity to pinch the tube as you reassembled the wheel, and cause another flat.