One of my irrational fears as I prepared to take to the road solo on my big RTW adventure, had been navigating the ferry needed to cross from England to France. Having taken the very same boat many years before in a car, on a particularly wet and cold night, I remember looking at the steep metal ramp thinking, “I’m glad I am not on a bike.” Almost 10 years later, and I was now faced with conquering this fear. 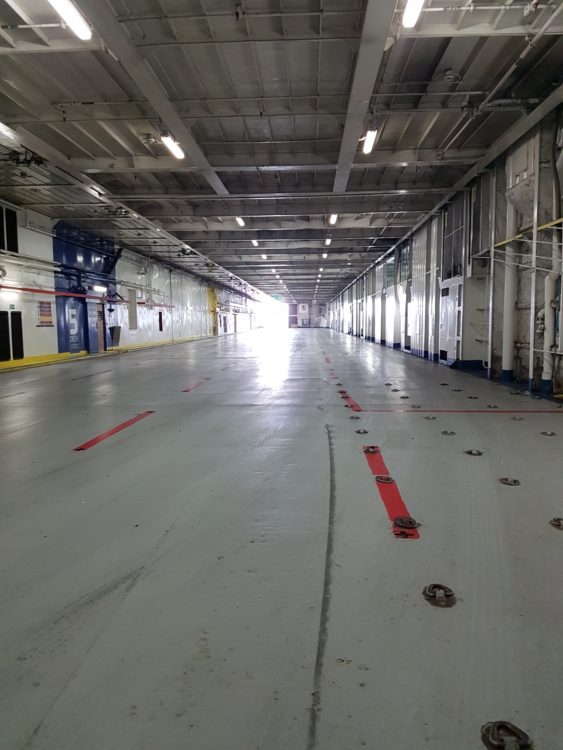 A slippery metal deck, enough to strike fear into any motorcyclists heart!

I convinced myself that it was most certainly going to end with both bike and I on the ground, or worse still, sinking to the bottom of the English Channel. Having spoken to several riders in the UK who regularly use the ferry, it turned out my fears weren’t completely unjust. The metal decks on board are notoriously slippery from endless cars, buses and trucks dropping oil and mixing with sea water. Thankfully, despite my angst, my initial crossing had been without incident, I was relieved to say the least.

Fast forward 4 months, riding through Europe, Russia, and Mongolia, I returned to the dreaded ferry with not even so much as a second thought. Having navigated my way across tens of thousands of miles, crossed borders, ridden through rivers that were higher than the seat; the ferry seemed like a civilised proposition. 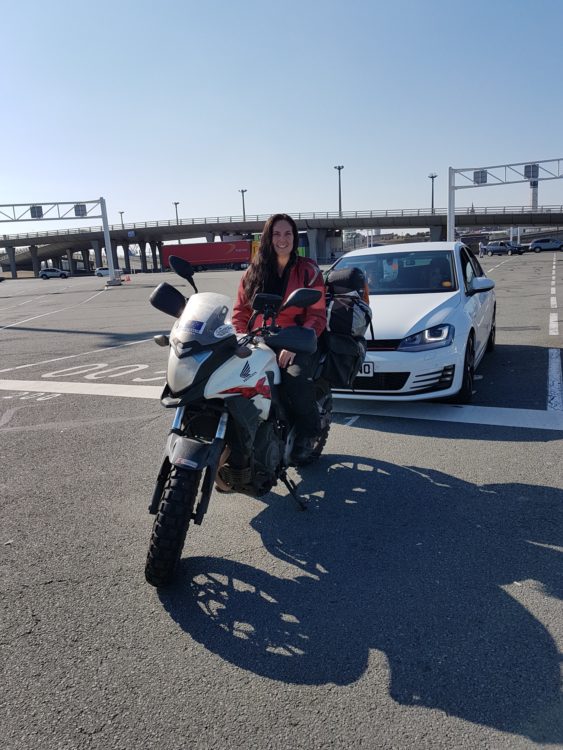 Calm and relaxed, waiting to board the ferry to Dover

As I rolled up to the ramp, I couldn’t have been more pleased with myself. My confidence levels were 100% higher than 4 months prior and it felt great. Once again, I was the first to board and I was marshalled by the crew into the area for motorbikes to be strapped down. Taking off my helmet and putting the stand down, I went to hop off so they could secure him for the trip. Just as I lifted my foot, I felt it catch on one of the tie-down hooks and before I even knew what was happening, I had pulled both the bike and myself onto the ground

Lying sprawled out, on the still empty floor, I motioned for the crew to come help as I was stuck underneath the bike. They came running and lifted it back upright, picked up my luggage that had been thrown all over the deck, whilst I wrestled myself back upright as well. It was far from the victorious boarding I had imagined the evening before. Re-arranging everything as they tied him down, I thought to myself, wow I am hungry, I need a sandwich. So, with that I looked at my bike, and realised that having already suffered several crashes in Mongolia, the weakened right handlebar had bent drastically as a result of the drop. I knew there was no chance of bending it back without the very real risk of it breaking, so I shrugged and went to the on-board cafe. 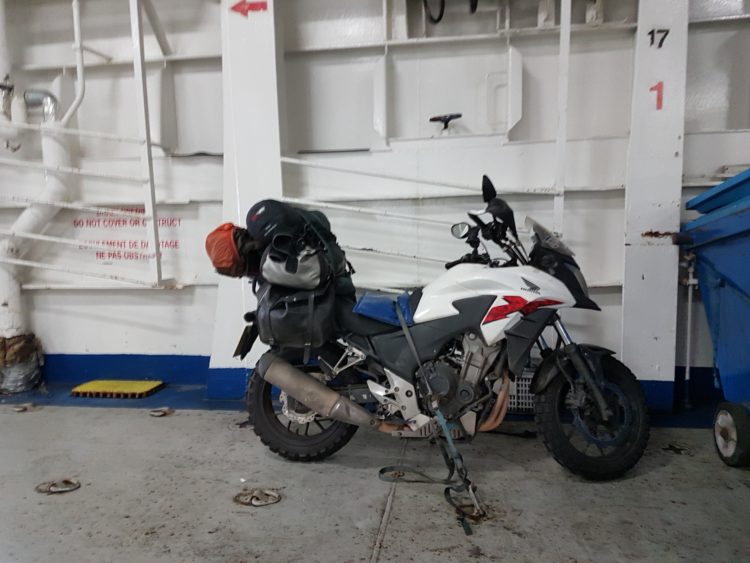 Strapped down and upright, now 🙂

It was almost poetic justice to drop the bike on the ferry. It was an ironic final confirmation for me that day of how far I had come. Not only in the vast number of km’s, but also within myself. Had that happened, as feared, on my first day on the ferry, I would have had serious doubts about continuing. Now, 4 months on, I hadn’t even finished fixing everything back in place before I had moved on from it. To say it didn’t faze me would have been an understatement. My foot got caught, the bike went over. It’s fine (sort of), I’m fine, so why waste time worrying about it? I had a proper laugh to myself as I sat there watching the Calais Port disappear. It is amazing what can happen on a few short months, if you make it happen.

I can’t tell you how many people have made the statement, “You’re so lucky to be able to do something like this.”

At first, I smiled enthusiastically and agreed. Yes, I know, I am so lucky. Now after coming back and waiting to start the next leg of the journey, I realised, no, I am not lucky at all. There has been nothing lucky about my being on this adventure. That’s not to say that perhaps my life circumstances at this time allowed me to take the opportunity to go, however it isn’t luck. I wanted to do it, and I did. It really is that simple. Whilst I have faced numerous hardships along the way, I know that I am achieving what I set out to do and that doesn’t come from luck. It comes from making a decision and following it up with actions, no matter what the sacrifice.

I have come to think that people who hear of something so far from their reality, or perhaps comfort zone, can only attribute it to luck. It seems unfathomable to them that it could be anything but. I can understand that to some degree. We all feel bogged down in our ‘busy’ lives, no time for what we really want to do. I have been guilty many times of ‘wishing’ to do something and never following through. Life always getting in the way.

Now having started something I knew I would finish no matter what it takes. I realise that wishing is wasteful, and the only true road block you have is yourself. I am by no means saying it is easy. I have sacrificed, I get lonely, I have faced fears and overcome them, but without this experience there is no way I would have known what I am truly capable of. 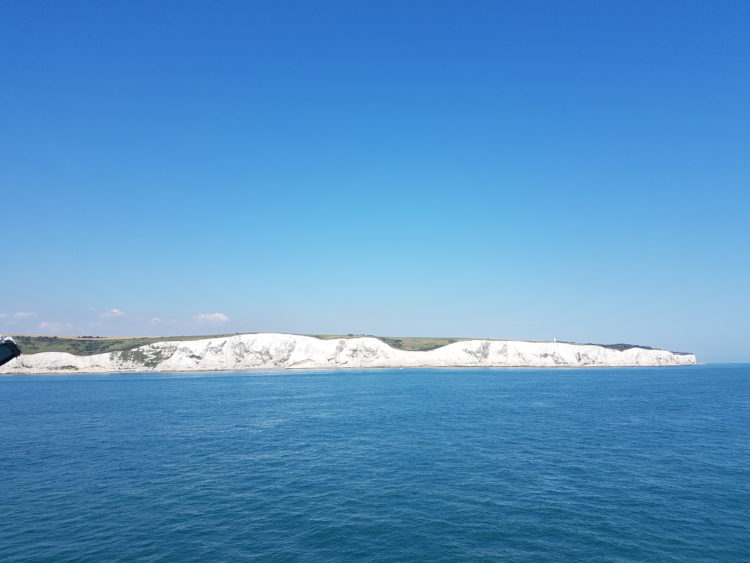 The white cliffs of Dover were a welcome sight

Disembarking the ferry after the 1.5-hour crossing was almost comical, every vehicle tries to exit the huge deck at once and there I was with my poor bent handle bars, trying to navigate my way through. It was a steep adjustment to ride with my throttle arm at a 45° angle for the 2-hour trip into London, not even that could dampen my spirits. The sun was shining, and I was about to be greeted by wonderful new friends that I had made a result of my journey.

I messaged my new friends and said it might be best to meet at the mechanics so the much-needed repairs could begin asap. There they stood waiting, slightly perplexed by the dishevelled sight that greeted them, but over-joyed to see me back in one piece. Even though I had the USA to cross before I completed my trip, it felt like such a huge achievement to get this section done.

It has also made me realise how incredibly fortunate I have been to meet the people that have become a part of my life as a result of the actions I chose to take. So maybe I am a little bit lucky because I have made new friends for life, people that I know I will never lose touch with. And if that was luck and I have used all of mine up, I would be more than happy with that.