Editors Note: I am very pleased to be able to share an extract of Heather’s fascinating journey. I own a copy of Timeless on the Silk Road and I highly recommend it.

My motorcycle travels started as an idea fuelled by a few beers at a back-yard barbeque while living and working at a mine on the fringe of Kakadu National Park, Northern Territory. In 1993, I rode my Yamaha TT600 to Fremantle where I boarded a cargo ship for South Africa. After riding through Africa, I arrived in London in late 1994 where  I worked as a motorcycle courier for a year. The next leg of my motorcycle odyssey was ‘the ride home’ via Russia, Central Asia, China and South East Asia. Instead, these plans—the very essence of my life in fact—fell apart when I was diagnosed with HIV after having the test as a requirement for a three-month Russian visa. Back in 1995, medications to control the virus to undetectable levels were still a year away from discovery. Back in 1995, death from AIDS was still inevitable. Rather than wait for an unrespectable death, I packed my TT600 for what I thought would be my one last adventure, my one last search for meaning. In Istanbul, I was issued, no questions asked, with a one-month Russian visa, which was still accepted in the former Soviet nations of Central Asia in those early years after perestroika. But what unfolded as I travelled the fabled Silk Roads of antiquity was a journey filled with unpredictability; the kindness of strangers (many of whom had a penchant for vodka); thought provoking moments of spirituality (quite common when one is faced with one’s own death); an insight into a timeless nomadic culture; and awe-inspiring moments of joy when faced with sweeping vistas and spectacular mountain landscapes… nirvana for the adventure motorcyclist. 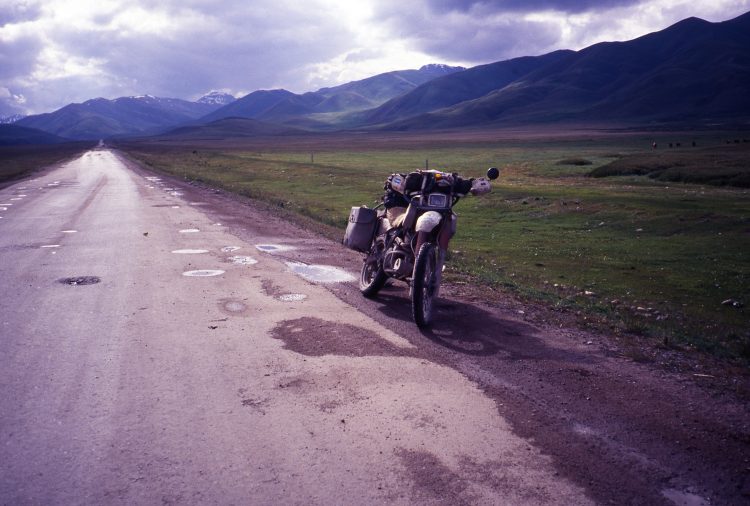 A typical road in Kyrgyzstan. Wide open spaces and next to no other traffic.

From my travels, I have had two books published, Ubuntu: One Woman’s Motorcycle Odyssey Across Africa (Black Inc. 2016) and Timeless On The Silk Road: An Odyssey From London To Hanoi, (Phonte Publishing 2019).  Will there be a third odyssey? Most definitely.

In this book extract from Timeless On The Silk Road, I am in Kyrgyzstan, a timeless magical land of snow-capped mountains, alpine valleys where nomads graze their herds of horses, sheep and yaks. I yearned to experience this ancient culture…

Timeless On The Silk Road: An Odyssey From London To Hanoi

THE KINGDOM OF THE HEAVENLY MOUNTAINS – KYRGYZSTAN

After an hour of riding on a washed-out gravel track skirting velvety-grass covered hills, traversing scree-covered gullies and rocky mountain streams, I reached the last hill, and the road dipped into a wide bowl-shaped valley blanketed with the thick pasture of high summer. The lake shone aqua and was fringed to the west by a low range of rounded mountains.

A small herd of horses scattered as I approached. Close to the lake’s grassy edge sat a yurt and an A-framed white canvas tent. It was the first yurt I’d seen along the lake’s shore, but a few distant specks of white indicated there were others. 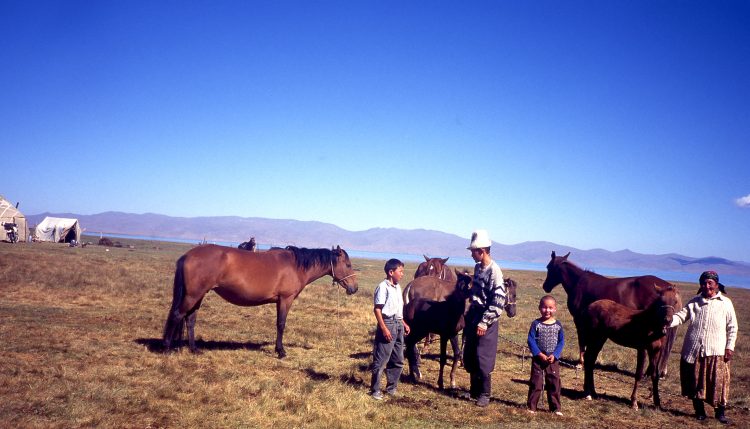 Heather spends a few days ‘hanging out’ with the nomads at Song Kol, Kyrgyzstan. 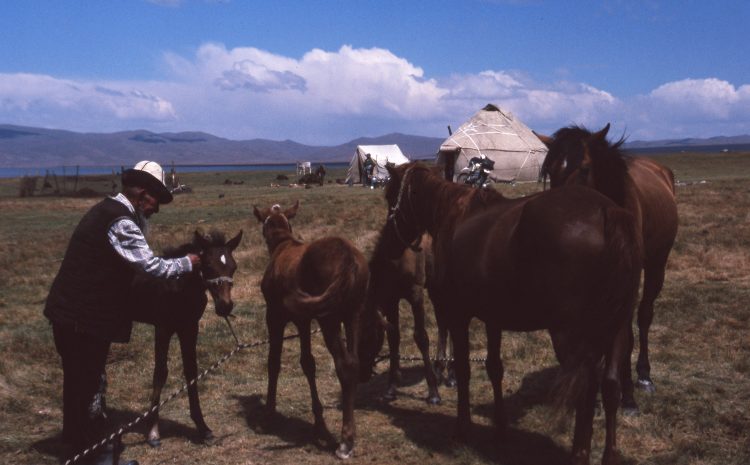 As I pulled up, the inhabitants emerged. It was mid-day, and I’d probably disturbed their lunch. An elderly man in a high black and white hat, a kalpak, and black waistcoat, and a dumpy woman in a floral dress and cream wool cardigan, smiled their welcome from deeply wrinkled brown faces. The three boys who ranged in age from about sixteen to five, stared at me suspiciously. The adults, I guessed, were the boy’s grandparents. And the boys were with them during the summer school holidays to help graze the family’s animals, while their parents went to work or ran their farm. In winter, they’d all move back to their home in one of the townships in the lower lying valleys where the boys could attend school, and the horses could graze on pasture not covered in feet of snow. This was their summer holiday, and as a nation of nomads, it was a time of freedom, wide open spaces and living their ancient heritage.

The older boy stepped forward in knee-high black boots made of soft leather, the same type of boots worn by his grandmother. He wore baggy trousers, too short for his lanky frame and a baggy wool jumper. His kalpak made him appear several inches taller than he was. The youngest boy sported a shaved head, probably a quick remedy to treat head lice, and his brother, the ten-year-old, threw me a quick smile.

‘What you want?’ asked the lad in the kalpak.

‘You speak English?’ I asked surprised. He nodded, holding a thumb and index finger together to indicate just a little.

‘I’d like to stay. I have my own tent,’ I added, and the elderly couple waved their arms to usher me inside their yurt.

‘Why you come?’ the lad shouted, stopping me dead after I’d turned to retrieve my gifts. 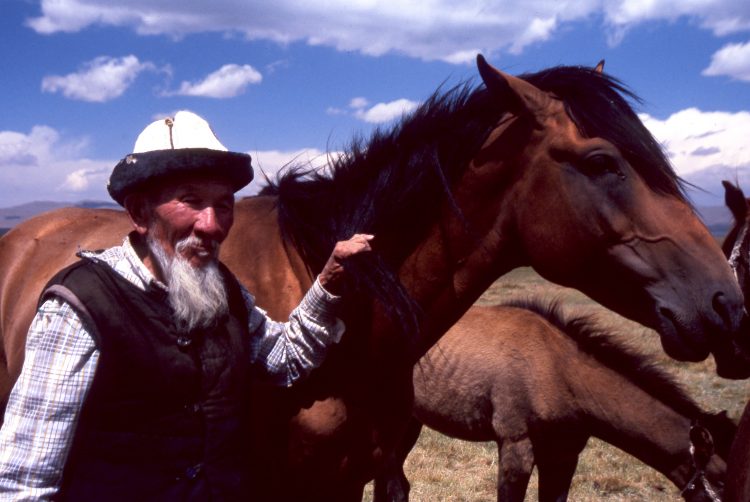 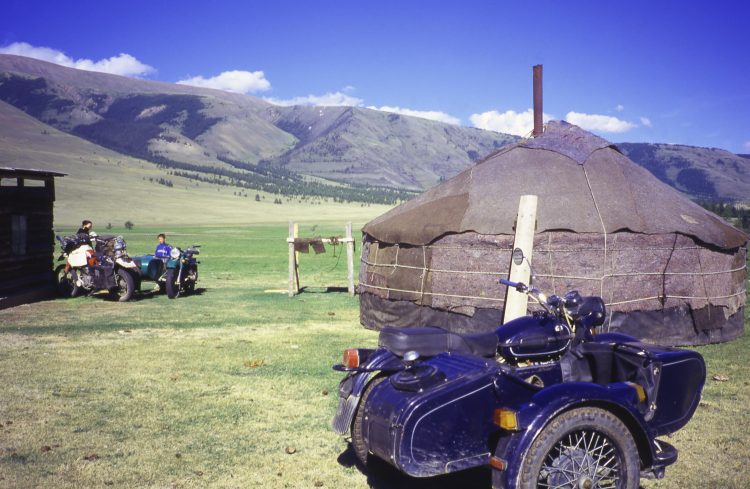 ‘It is very beautiful here. But maybe there are wolves,’ I stammered, hoping this would explain why I did not want to camp alone. I felt I couldn’t say I just wanted to ‘hang out’; to experience their nomadic life. Saying this would seem like I was here for no other reason than to invade their privacy; to observe them as though they were a curiosity. My made-up fear about wolves, which actually were a possibility, although not in summer when food was plentiful, gave me a genuine reason to be there.

I stuffed the gifts in my daypack, and as I walked towards the yurt, the lad gave me a piercing stare that clearly said he saw through my deception. He turned and strode over to where several foals were tethered to a long line pegged into the ground. A light grey cow stood tethered nearby. 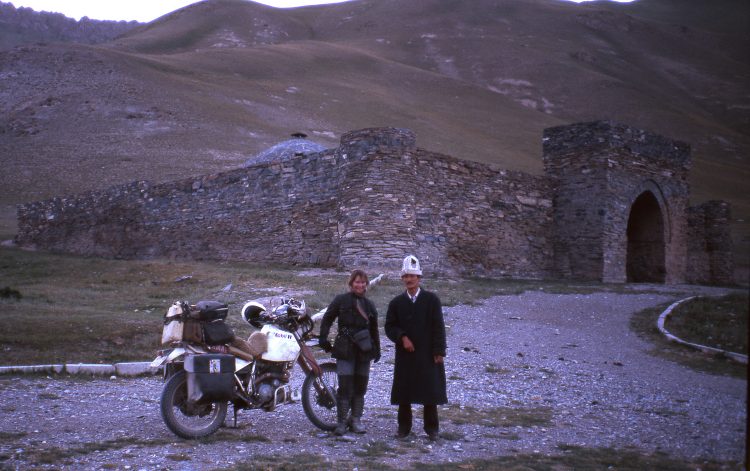 Just like travellers and merchants from ancient times, Heather spends the night at Tash Rabat, a 15th century stone caravanserai in Kyrgyzstan.

Taking off my boots, I entered the yurt and its ornately carpeted interior. Hand-woven red-patterned rugs adorned the walls, and a large bright red velvet throw covered a pile of mattresses that would be laid out on the floor when it was time to sleep. In the centre was a low table and against one wall a little square stove, its chimney pierced through the ceiling. At the entrance was a wooden barrel of kumis, fermented mare’s milk, which the old woman stirred with a ladle as she entered. She offered a bowl, which was slightly sour and just a little fizzy. As I unpacked my gifts, I introduced myself and handed the bottle of vodka to the old man, who didn’t seem all that interested and placed it on the floor beside him. The elongated dark eyes of the two younger boys lit up excitedly when they saw the sweets and chocolates, and the elderly couple smiled warmly. We sat this way for a few minutes until the awkwardness was broken when the lad appeared, stooping to bend his lanky frame as he entered the yurt. A few words were exchanged between him and his grandparents. The old woman stood up and pulled one of the mattresses from the pile, laying it on the floor.

‘I have a tent,’ I said and looked at the lad to explain.

‘You sleep inside. Very cold at night.’

‘I have my own mattress and sleeping bag,’ I said and got up to retrieve it so I would not deprive one of the boys their bed.

With greetings over, the family went about their chores. The old woman went to milk the cow, and I followed the old man and the three boys to the foals. Further along the shore of the lake, a line of bay and chestnut horses moved toward us. These were the mares returning to their foals, and when they reached the tether line, the grandfather and two older boys harnessed the six horses. Several more grazed nearby. While the old man held the mare, stroking its neck to keep it calm, the lad quickly milked her before moving on to the next, and when all were milked, the foals were allowed to feed. 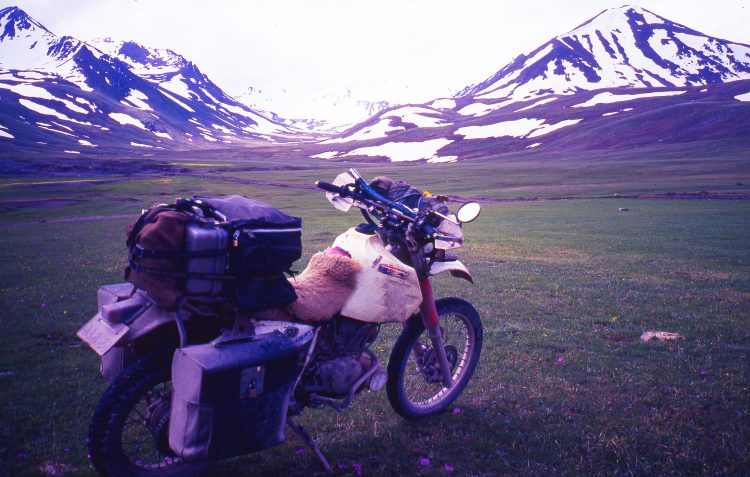 A mountain pass in Kyrgyzstan

Over the next two days, I fell into the gentle rhythm of nomad life, which revolved around milking the mares several times a day. Having grown up with horses, I helped halter the mares and settled each to be milked. On the second day, the old man left the boys to do the milking alone and seeing I was of some use, the lad slowly warmed to me. So much so, that he told me his name and that of his brothers. The lad was Taalay, the middle brother Aybek and the youngest was Ulan.

Later that afternoon, my usefulness rose considerably when one of the foals broke free of the tether line. As it dashed past, I dived to grab its lead, its whinny causing its mother to gallop towards us. Taalay quickly tethered the foal as she approached. A kind of friendship developed after this, and the two younger boys were no longer shy in asking for my binoculars to spy on the waterbirds nesting and feeding on the lake’s marshy shore.

On the third day, I packed my things and said goodbye to the nomad family. While I felt very much like the intruder when I’d arrived, they had opened their home and their hearts to me. Before leaving, I handed the old man a handful of notes that amounted to about US$10 for my stay.

‘No money,’ Taalay said. ‘You work very hard with us.’

‘It was very special to stay with you. Thank you. Many tourists want to do this. Maybe this will make a good business for you one day.’

‘Maybe,’ he said and gave me a broad knowing smile.

In the near future, there would be yurt camps dotted all along the shores of Song-Kol. Individual Kyrgyz families were also catering for individuals and smaller groups wanting to experience nomad life with bookings made online via sites like Airbnb. Local tourism, such as these yurt camps, brought new prosperity to local families as they shared their cultural traditions with a growing number of people from the west, people that increasingly live and work in cities devoid of wide open spaces, nature and a life lived close to the earth. A nomadic life that we, as humans, once all lived. As I left the family, I hoped that Taalay and his brothers would go on to share their nomadic traditions with others¾and find prosperity.

Timeless On The Silk Road: An Odyssey From London To Hanoi is published by Phonte and is available at bookshops and online or signed copies can be purchased from Heather for $30 (including postage) via Paypal at www.heather-ellis.com. It is also available from Amazon and is on Kindle. 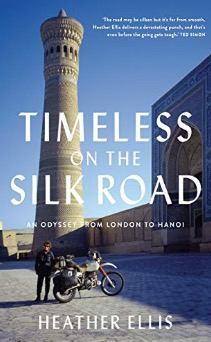 All Photo by Heather Ellis

Insomnia on the Road