Bike maintenance can be a pain in the neck while you’re on the road, if you don’t have a centrestand. Anytime you have to do something with the rear wheel, or the drive chain, you’ve got to get that back end of the bike into the air. Sometimes there’s a stump or a rock handy that you can use to prop the bike up. Sometimes there’s a handy tree branch that you can use to jury-rig a makeshift hoist.

Or, you could use a SnapJack to get the bike’s back end into the air.

The SnapJack is a portable bike jack from the Canadian company Tirox. Tirox sells a wide variety of useful bike maintenance products, including chain lube, a 360-degree chain brush, an assortment of cleaners, and coolant (see the whole lineup here). It also sells a line of portable bike jacks, including the SnapJack V2, the SnapJack SS (for single-sided swingarms) and the SnapJack Xtrail (not available yet). Tirox sent me a SnapJack V2 a couple of years back, when it was the only version in the line, and I’ve been packing it on bike trips ever since.

The SnapJack is fairly rugged. It’s constructed of two steel arms (with a thick coating of tough paint) that fold together for transport, held together by a couple of pins through the sides, and a Velcro strap around the outside. It ships in a small bag to keep everything together and tidy. 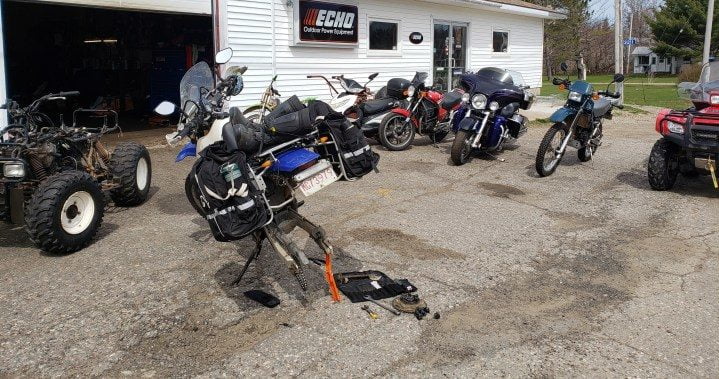 When you want to use the SnapJack, you set the kickstand down. Then you take that Velcro strap and wrap it as tightly as possible around your front brake lever. This keeps your front wheel from rolling forward, which would end up with your bike crashing on top of you or the ground during the middle of a maintenance session.

Then, take the pins out of the SnapJack and open it up. One end of the SnapJack has a serrated steel foot, for grip on the ground. There’s some pivoting capability built in, to compensate for uneven ground. Obviously, you don’t want to stick this end under your bike’s swingarm, as it would gouge the finish.

The other end of the SnapJack has a cradle, with rubberized tips. This is the end that you fit under your swingarm. Now, you’ve got to put some weight on the SnapJack, using the leverage of the two arms to lift your bike into the air, and then lock it in place with the pins as you can see in the video below:

There’s also a set of instructions here. As you can see by the video, it can get a bit fiddly. The problem is that you have to be very cute in your placement of the SnapJack. Too far forward, and it won’t lift the bike enough to spin the rear wheel. Too far back, and the bike’s balance point will be too far off. It takes some practice to get used to it, and on some bikes, you’ll probably never get it right. As Tirox’s website says, this isn’t designed for cruisers. It can also be a bit tricky to use on some dual sports or adventure bikes, requiring a bit more fiddling, as the increased ground clearance means the SnapJack might not always have quite as much lift as you’d like. Probably, that’s why the new Xtrail version is coming.

No matter what bike you’re using, though, it’ll take a bit of wiggling around before you figure out just where you want it. And, once the bike’s in the air, you’ve got to be careful. It’s now balanced between the front wheel, the kickstand and the SnapJack, but the geometry of those three parts means it’s not the most stable tripod out there, and if you’re doing some sort of maintenance that requires some heavy torque (removing a rear wheel, say), then you should keep an eye on the bike and make sure you aren’t tipping it over. In fact, if you’ve got to loosen the rear wheel for some SnapJack-related maintenance, you’re better off taking most of the load off the axle bolt before you get the rear end of the bike into the air. For lightweight chores like chain lubrication, it’s not bad, though.

You also need to be careful about where you place the serrated foot of the SnapJack. If you use it in gravel, the bottom end can slide out; use it on a hot day on asphalt, and it could sink into the soft pavement, just like a kickstand can, so beware.

So, overall, this can be a finicky gadget to use, but if you realize that and use it sensibly, it can be a very useful tool to have along on a road trip. I’ve used it on my DR650, my WR250R and my RF900R, and it’s saved my butt a couple of times, particularly when I had to do a tire change in a backwoods repair shop’s parking lot last spring. If you aren’t too worried about weight or packing space, it’s reassuring to know that if you get a flat or some other trouble with the rear wheel, you can easily fix it. 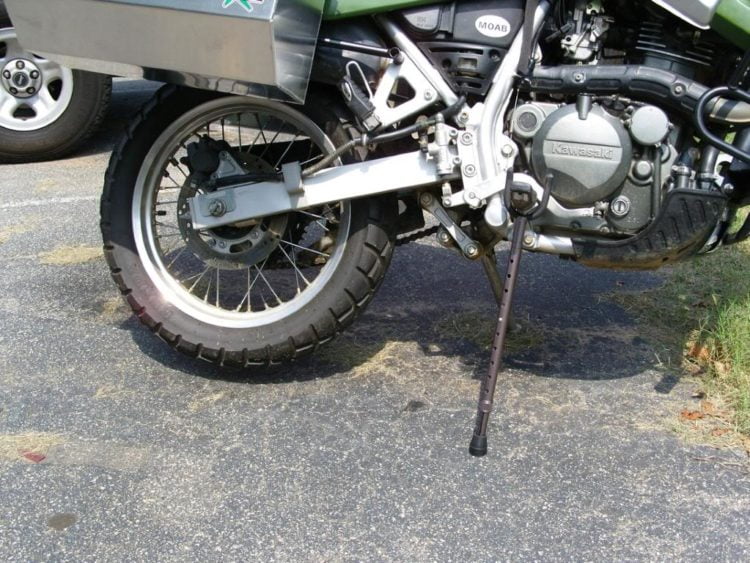 This DIY jack might be a better option for some riders, if they’re thrifty, or do more riding off-road. Photo: mromo98

The SnapJack V2 is $49.95 at Revzilla, which isn’t bad for a useful made-in-Canada product. It would be cheaper, though, to jury-rig a jack out of a cane, as seen here. It depends how much time you want to spend faffing about collecting all the bits, etc., but some riders will find this preferable—paticularly KLR owners, as it matches their milk crate luggage. Joking aside, the DIY jack is probably a bit more useful off-road, as it adjusts better to a wider variety of terrain. However, for street riding, the SnapJack is a convenient and handy gadget that I have found regular use for, ever since it found its way into my toolkit.