You know the drill.  All your brothers and sisters riding motorcycles are part of your family.  Over the years, we’ve developed a “cultish” like requirement whereby we are peer pressured to openly express our love to our extended family.

It’s called “The Wave”.  You know, the signal that tells other riders that you recognize their sense of adventure, the freedom of the open road, and that yes, they too are cool.

But over the years, I’ve observed that there may be an apparent waving etiquette.  Of course, you don’t want to be rude (or perhaps you do) so you’ve got to study the appropriate method to let your fellow riders ( or “bikers” if you must) know that you have studied and know the rules.

After many years of riding, my observations have concluded that there are six primary categories of waves.  So in no particular order, here they are:

◊  Left Handed Down Low – The left hand is extended nearly straight down toward the pavement with a straight arm.  At least two fingers are extended, but you may be greeted by up to a complete handful of digits.  This method seems to be the preferred method of crotch rocketeers.  Sometimes this signal is difficult to spot due to the closing rate between the two opposing bikes.  Sort of like Top Gun’s “Where’d who go”?

◊  Left Handed Straight Out – The arm is extended straight out towards the opposing lane.  Generally, all 5 digits will be extended into the breeze.  The palm is facing directly towards the approaching rider like “high fives” in waiting.  Actual contact between passing bikes is rare.  When it does occur, a rider’s route may change for a quick (or not so quick in most cases) visit the hospital emergency room.

◊  Left Handed High – Used by monarchs, knights and young children (with fervent shaking), the Left Handed High has become the domain of the adventure rider.  The left hand is extended upwards with the palm facing towards the oncoming rider.  Usually, all fingers will be extended and closely spaced.  If approaching this wave slowly, the gesture can look like a call for you to stop, or the signal to bow your head.  It is neither, it merely indicates that the rider salutes your adventures and of course, expects the gesture in return.

Using this kind of wave is not without jeopardy.  Riders using this kind of wave risk alienating themselves from their rider family.  Cruise control is not available on all motorcycles and a sort of hate/envy attitude may be encountered by users of this wave.  This is not the suavest way to wave but if you must…

◊  I’m Busy Head Nod – Sometimes it’s just not convenient to wave, or you have some aversion to waving to someone you don’t like.  For example, you have stopped at an intersection and you just beginning to accelerate.  Your left hand is working that magical lever on the left-hand grip.  There’s no time to raise an arm in salute so it is acceptable to merely nod your head.  Your fellow riders understand your complete attention to riding your machine.  There’s no shame in not waving here.

◊  The ADVRider Inmate Single Digit Wave – Now we come to one of the secret waves that only the most select group of riders practice or even know about.  Developed by a riding cult-like no other, the ADVRider Single Digit wave is a true expression of love, joy, community, and potentially your demise.

The ADVRider Inmate Single Digit Wave is practiced in many variations.  It may be given low, straight out, high and right handed.  There is no correct or incorrect hand positioning.  The only requirement is that a single digit, in particular, the middle digit of either hand is extended fully and proudly into the airstream.

If expressing true riding passion, the Single Digit Wave may be continued after the opposing rider has passed.  The hand with the single digit in these cases may be rotated towards the rear where the opposing rider can still see your salute in his/her rearview mirror(s). 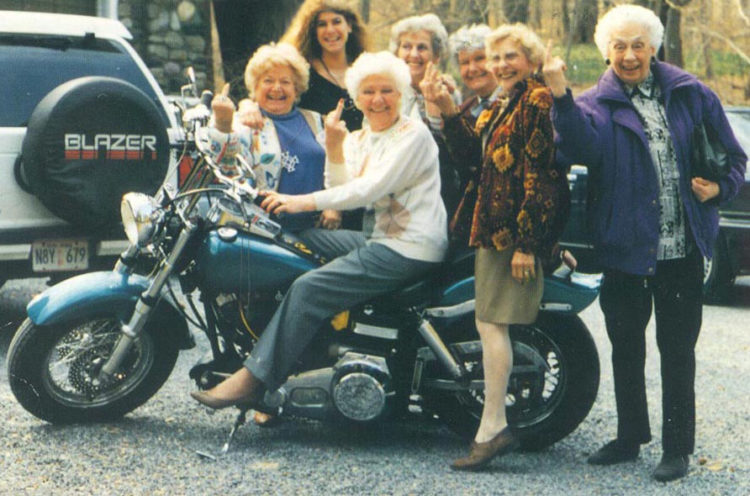 Note that the above are USA methodologies (although the ADVRider Inmate wave is universal everywhere).  Due to cultural differences, traffic rules and the like, waves may be different around the world.

For instance, using a Left Handed Low in those places where people drive/ride on the left would be pointless.  The waving line of sight is completely interrupted by the rider and the machine.  In cases such as these, There may be different wave gestures may have been adopted for different classes or riders.

The last thing to remember is the above is humor.  Waves are optional.  If you feel compelled to wave so be it.  If you don’t want to wave, that’s OK too.  It’s just about fun, enjoyment and perhaps, just a little bit… having something in common.  That something is the love of riding on two wheels.  Oh and FYYFF!