People couldn’t agree about Elvis Aron (he changed it later to Aaron) Presley. Some people couldn’t even agree with themselves. “His kind of music is deplorable, a rancid smelling aphrodisiac… It fosters almost totally negative and destructive reactions in young people,” claimed Frank Sinatra when Elvis was starting out in the ‘50s. But when the King died in 1977, the Chairman of the Board said, “There have been many accolades uttered about Elvis’ talent and performances through the years, all of which I agree with wholeheartedly.”

I’m not a music critic or a musician – I can carry an instrument, but I can’t carry a tune – so you’re looking at the wrong person if you want to find out just why the King was the King, with not a single Pretender even in sight. I was too much of a jazz snob at the time to appreciate his stuff, but my girlfriend kept dragging me to his awful films and his work left its mark on me as it did on almost everyone else at the time. I mean, even Leonard Bernstein reckoned that “Elvis is the greatest cultural force in the twentieth century,” and he said that back in the ‘60s.

“A lot has been written and said about why he was so great, but I think the best way to appreciate his greatness is just to go back and play some of the old records… Time has a way of being very unkind to old records, but Elvis’ keep getting better and better.” That’s the front man of Huey Lewis and the News, who only gave up rock’n’roll when he went deaf at 67. 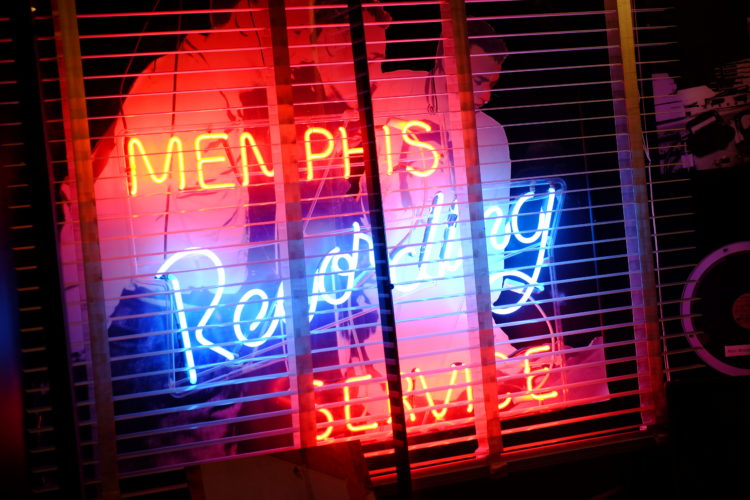 So when I was in Memphis, I rode out along Elvis Presley Boulevard to Graceland to pay my respects. You can’t miss it, the signposting is literally amazing. Graceland is a theme park now. On the side of the road opposite to the house there’s a huge car park – US$10 for even a motorcycle – with Elvis’ planes off to one side and then there is what I would claim to be the world’s largest souvenir shop. You could furnish a house and have the King’s picture on everything in it. Here you buy a ticket for a shuttle bus which takes you across the road where you are sluiced through parts of Graceland itself.

In the queue for the ticket, I suddenly thought “I don’t want to be here. This is not about Elvis.” I actually felt revolted and had to go out and have a bit of a sit down.

Then I got back onto the Boulevard and rode my Indian Springfield in the other direction, and turned west into Union Avenue to number 706, Sun Studio. Unlike the Graceland megaplex, Sun Studios looks pretty much the way it did when Elvis, Johnny Cash, Jerry Lee Lewis and so many other greats cut their first records here. The small café downstairs is funky and well priced and sells some souvenirs I would buy, unlike the Elvis ashtrays at Graceland. The tour cost US$14 and included an informative and clever guide. 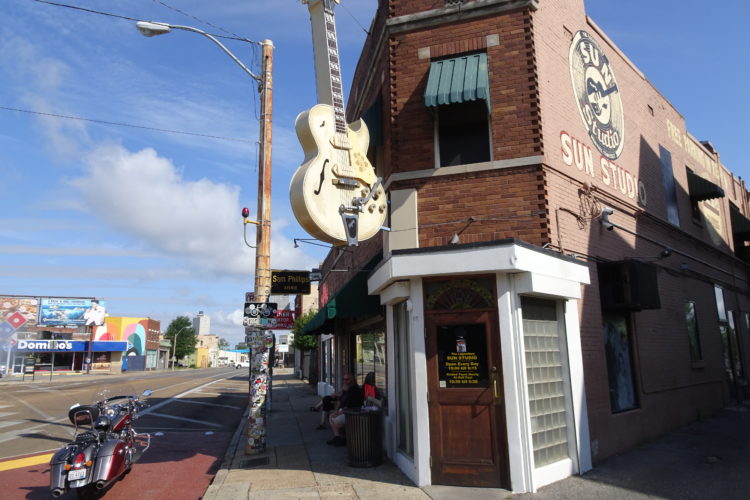 The outside of Sun Records is modest, but what a punch it packs inside!

Best of all, it felt real. Sun Studios is still used for recording sessions – at night – and you can imagine it. Best of all, there’s a cross on the floor where the vocalist used to stand and probably still stands. We were invited to take the position ourselves, and I swear I felt a ghostly smile when I sang (under my breath) “Train I ride, sixteen coaches long…” 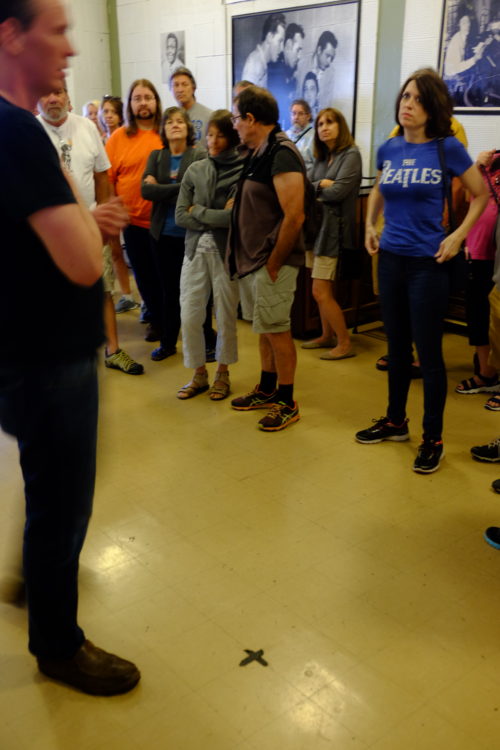 Yes, that’s the cross where Elvis, Johnny Cash and all the other greats stood.

The obvious thing to do then was to chase Elvis a little further. He may have lived in Hollywood and spent a lot of time in Las Vegas, but his track is obscured there by so many other performers. The hour and a half ride down to Tupelo, his birthplace, beckoned instead. Once you’re outside the Memphis conurbation on US78 and when you cross onto US22, the riding is about as relaxing and pleasant as it ever gets on the Interstates. The countryside is green, and the ride is an open invitation to ransack your memories of the King’s music.

“Since my baby left me, I’ve found a new place to dwell…”

Elvis’ birthplace is a rather seriously restored two-room ‘shack’ on Elvis Presley Drive (natch) just off East Main Street in Tupelo, and although it sits among a museum, function centre and whatnot else Elvisish it doesn’t have a commercial feel to it – and you can walk right up to it and even into it without standing in a queue (depending on when you get there) and being confronted with cheaply-made souvenirs. 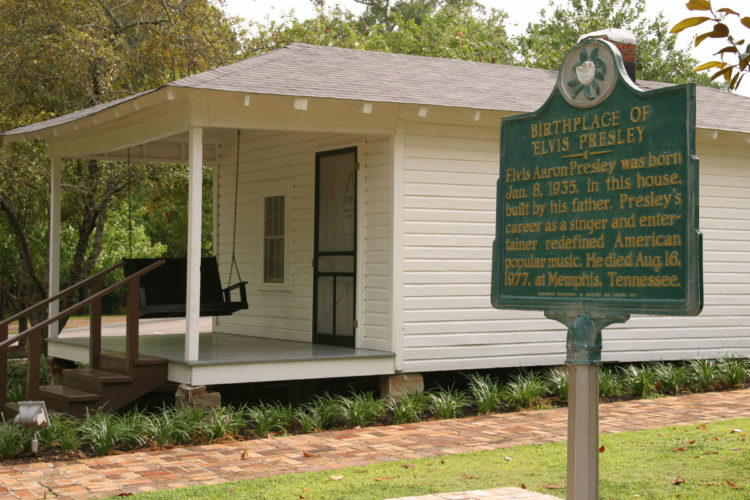 Elvis Presley’s birthplace is nowhere near as crowded as Graceland.

Elvis only lived here until the beginning of his teenage years, but to me he is here much more than he could ever be among the tatt at Graceland.