Leaving the Churchill Falls area, you’re in for about 180 miles (290 km) of empty highway to Happy Valley-Goose Bay, but because the gas stations aren’t right off the highway, you’ll want more than 200 miles of fuel range before starting off.

The scenery here is much the same as before, rocks and trees, but with fewer lakes, perhaps, and occasionally some elevation changes, particularly around the Pinus River. As you approach Happy Valley-Goose Bay, you’ll see more signs of settlement, with camps built along the highway in some areas. There are no twisties or anything like that, as this stretch of road was built for the same practicality as the rest of the paved parts of the highway. 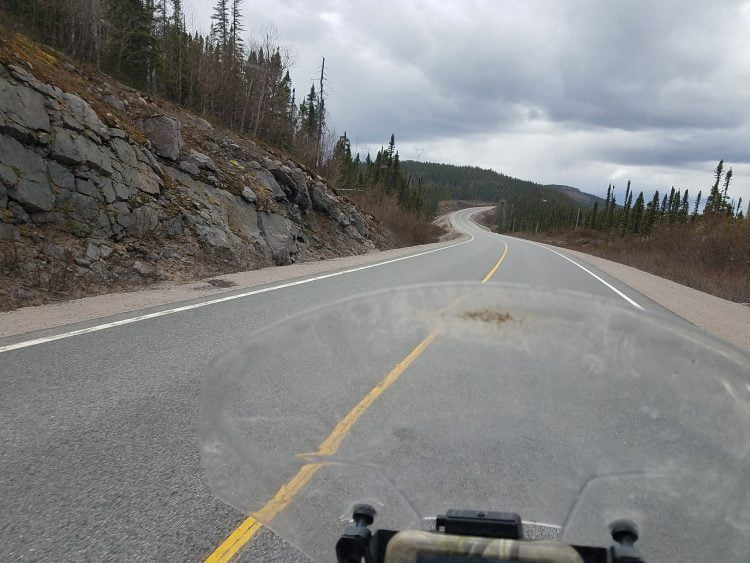 This is about as curvy as the road between Happy Valley-Goose Bay and Churchill Falls gets. Photo: Eric Foster

By now, you’ve probably realized a good part of this journey is just a long pavement slog through Labrador’s interior, which isn’t necessarily thrilling, unless you’re enjoying stops along the way—side trips down gravel roads, stopping for fishing or camping, that sort of thing. Don’t worry—once you get to Happy Valley-Goose Bay, things get more interesting.

The town itself is a weird mish-mash of a frontier outpost and a massive air base (Canadian Forces Base Goose Bay). There are a few options for gas, plenty of places to eat, and lots of industry in town. It’s got the same cool multicultural vibe as Labrador City, but with less French spoken and more indigenous language. 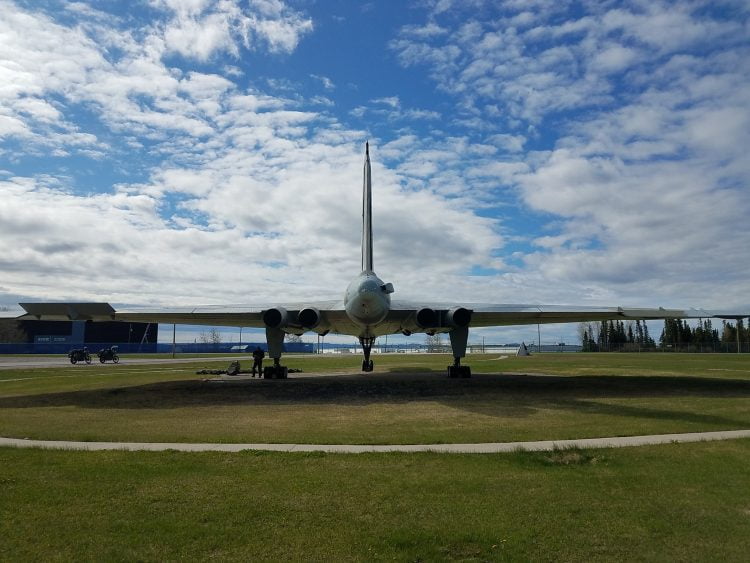 You can get onto another interesting side trip here, to North West River. This small town is a former fur trading settlement, and there’s a museum about those days, along with places to sleep, eat and gas up your bike. It’ll take you less than an hour to make the ride, and if you’re really keen on exploring, you should do this.

Otherwise, gas up your bike, and make sure you’ve got whatever other provisions you need. The trickiest part of the Trans-Labrador Highway is coming next.

Leaving Happy Valley-Goose Bay, you’ll notice a sign saying it’s about 410 kilometres (255 miles) to the next fuel stop. You’re going to go almost 260 miles between gas stations, more if you do side trips off the main road. There are no towns en route; you might find a work camp, and you might not. If you think you’ll be close on fuel range, buy a cheap jerry can in Happy Valley-Goose Bay, and fill it for insurance. You can always give it away to someone you meet en route after using the fuel. 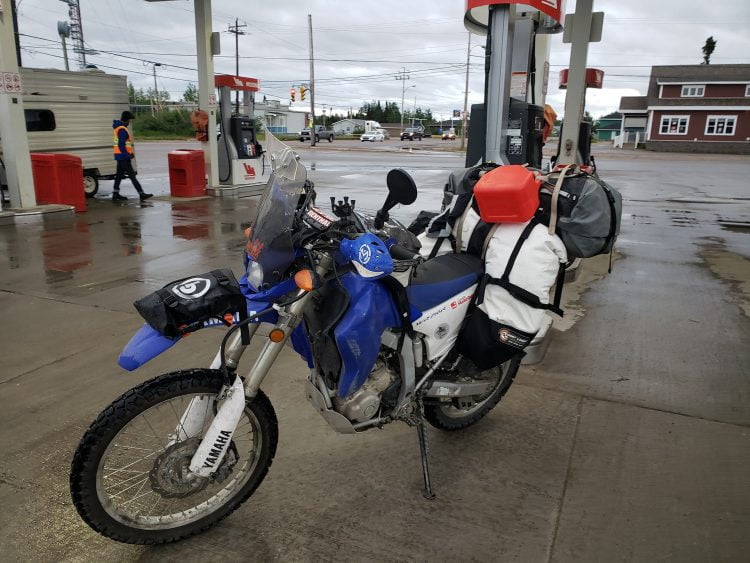 Loading up on fuel at Happy Valley-Goose Bay. I made it to Port Hope Simpson without needing the jerry can of extra fuel, but it provided peace of mind. Photo: Zac Kurylyk

This stretch of road starts out as fairly easy pavement, passing through more rocks and trees, and occasionally bridging rivers that look like very interesting fishing, but with signs warning against the taking of salmon. Oh well.

This continues for about 75 miles (120 km), more of the same scenery that’s been constant since Labrador City, and then bam! The pavement ends, and the gravel road begins.

Now, as of 2020 when this was written, there were roughly 160 miles (260 km) of unpaved road before reaching tarmac again, but the government is working hard to close this gap. The road builders have been on a massive campaign the past 10 years to completely pave the Trans-Labrador Highway, and the trip that was a challenging slog in the early 2000s is getting easier all the time. In a couple of years, Labrador City to Blanc Sablon will just be an extended highway jaunt, with only weather and mosquitoes as challenges, if you stick to the main road. 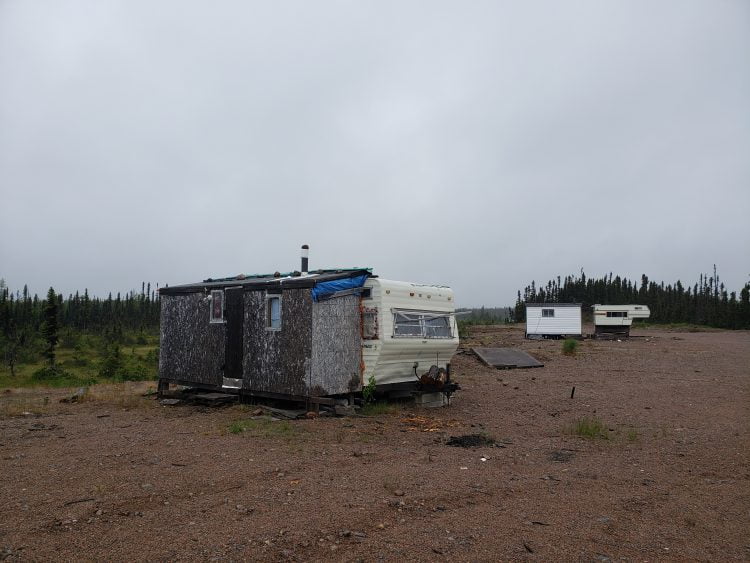 One of the few roadside signs of civilization, if you can even call it that, between Port Hope Simpson and Happy Valley-Goose Bay. Photo: Zac Kurylyk

But for now, this is the part of the trip that first-timers often look forward to the most. So, don’t screw it up. The most common cause of Trans-Lab crashes among people I know is excess speed on the unpaved section here. The easy pavement can get your guard down, and this gravel doesn’t appear to pose much of a challenge. However, many riders have mistakenly assumed this was the equivalent of an unpaved Autobahn, and paid the price with an airlift home, or worse.

As long as you have decent tires and ride smart, you should be fine, though, even at extra-legal speeds. Just don’t be an idiot.

At this point, you’re probably in the most remote country in Labrador. You won’t see many cars or trucks, and almost none at night, if you’re camped by the road (don’t ride the road at night, it should go without saying). 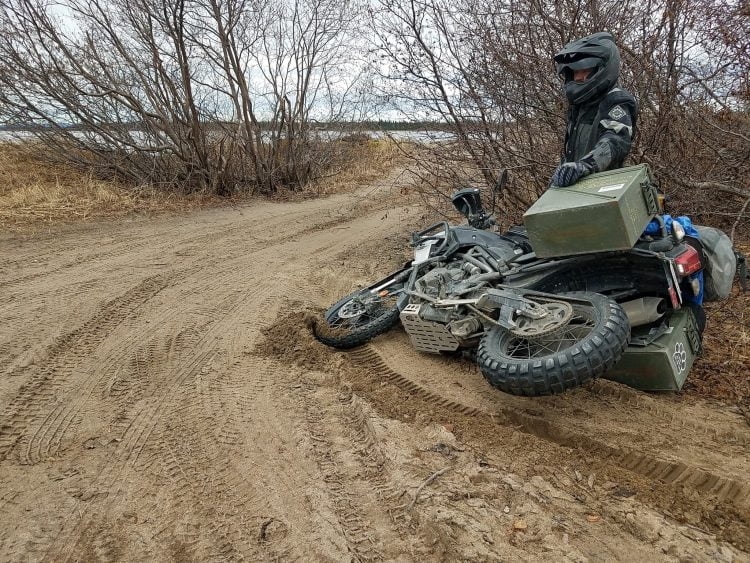 There are plenty of opportunities for side jaunts off the Trans-Labrador Highway, but beware! The riding can get tricky fairly quickly, especially if you’ve been lulled into a false sense of security by the monotony of the Trans-Lab. Photo: Eric Foster

Hydro lines run along the highway for most of its length, and there are plenty of side trails that can take you up to them, where you can gaze in awe at more . . . rocks and trees! You’ll also see plenty of small creeks and ponds along the side of the road, and many of these are excellent for brook trout fishing, at least early in the season.

You’ll likely encounter a road building crew along this stretch, and the torn-up and rutted roads around their construction zones and camps will likely be the worst terrain you’ll encounter. Like Quebec’s Route 389, the government keeps this in good shape.

Eventually, the road turns back to pavement, and you’ve got about 30 miles (50 km) to ride into Port Hope Simpson, where you can refuel. As the road turns to the coast, the scenery changes very quickly, and the conifers lining the road give way to coastal views. The “adventure” part of the ride is over, practically speaking, but the scenic part is next. 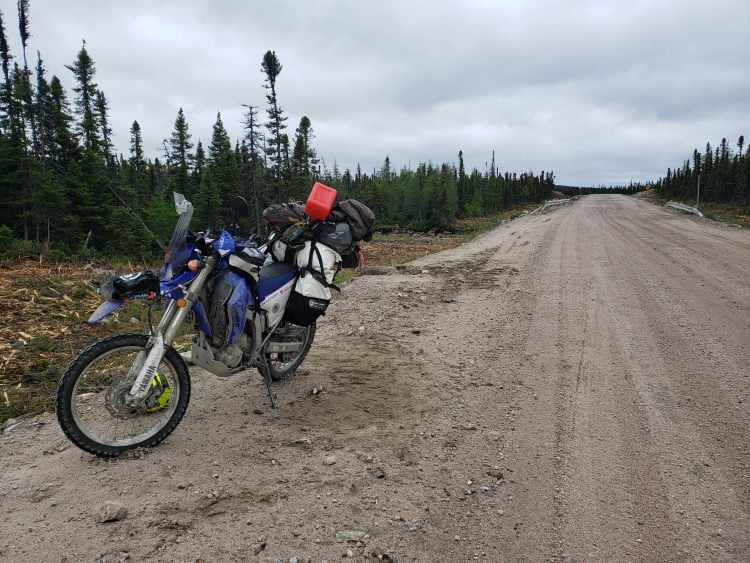 A pretty typical stretch of the unpaved Trans-Lab section between Port Hope Simpson and Happy Valley-Goose Bay. The road’s mostly in good shape, even when it’s been raining. I fished a brook just out of frame here, caught some small brook trout, and cooked up a meal roadside, next to the bike. Photo: Zac Kurylyk

There’s one decently long side trip you can do on this stretch. Instead of running straight through to Port Hope Simpson, you can also divert northwards to Cartwright, another remote coastal town. There’s gas here, some adventure tourism and fishing opportunities, and also some other even smaller towns in the nearby area (Cartwright only has around 500 residents). A trip here will certainly add to your journey’s length, but if you’ve got the time, you should try to take advantage of the opportunity to see more wilderness, instead of slogging along the main highway.

You’re going to see a huge difference in the road from here on. First of all, towns are spaced far apart, but nothing like the interior of the Trans-Labrador Highway. Gas is available in most spots, and the towns have a fishing village vibe, not the company town feel of the interior. You’ll meet lots more people, and they’ll be super-friendly. All the towns are built on natural harbors, and the roads between them still have lots of trees, but there are also beautiful salmon rivers. As you get close to Red Bay, you’ll leave the forests behind, traveling mostly through rocky, rolling hills lined with ponds and covered in bushes. It’s a weird landscape, but absolutely gorgeous, especially when the ocean is also in sight. Occasionally, you’ll also encounter some decent curves on the road, as it winds through boulders.

“Only way I can describe the scenery is otherworldly,” another traveler told me. “It’s like running at 5000 feet elevation for 150 miles, but it’s 50 feet.”

Just below Port Hope Simpson, you can veer off the main highway and travel 20 miles (30 km) of dirt to Lewis and take in what’s called “Iceberg Alley.” Even late in the summer, you can see icebergs here. 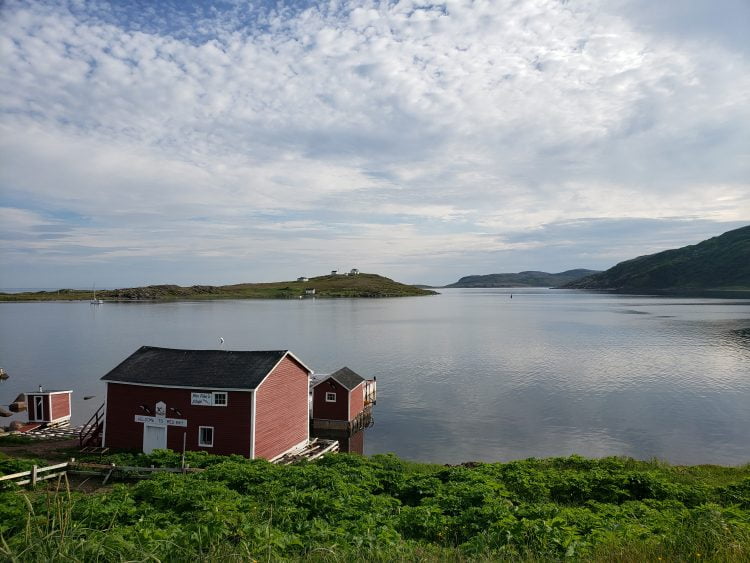 Red Bay, one of the most gorgeous towns you’ll see on this trip. The first Europeans arrived here about 500 years ago, to hunt whales. Photo: Zac Kurylyk

Further south, Red Bay is definitely worth a stop; it’s been a home base for fishermen and explorers since the 1500s, a major center for Basque whalers. Sunken ships are still in the area, and a cemetery holding the remains of at least 140 of those early adventurers. And, it’s a beautiful spot for photography, even if you don’t care about history.

Carrying on, you’ll get to the Pinware River; there’s a provincial campground here, if you want to camp but you’re also in need of a shower. From here on, the road is fairly well-populated until you get to the ferry in Blanc Sablon, with small towns every few miles, some decent restaurants, lots of fuel availability, and some accommodations. 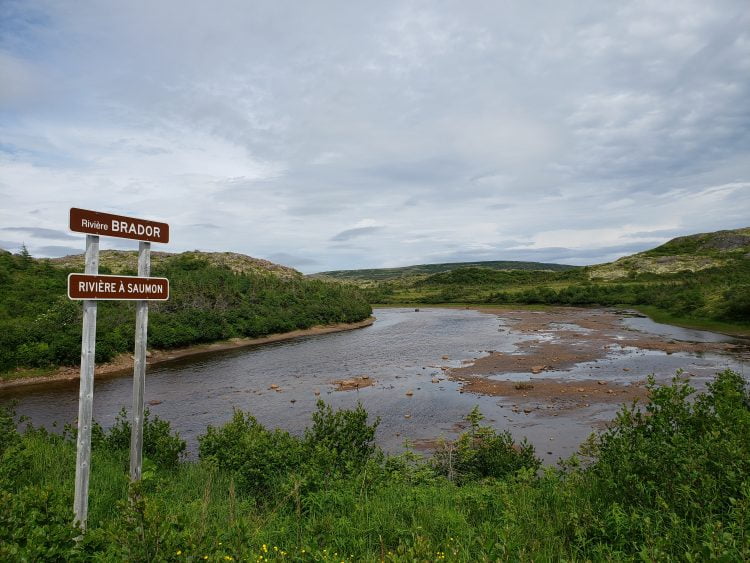 If you have time, while you’re waiting for the ferry to Newfoundland, you should explore southwards in Quebec. The road here is fairly curvy, and the views are gorgeous. Photo: Zac Kurylyk

As you ride here, it’s worth stopping occasionally to look out to sea. You can spot icebergs floating here well into the summer, as well as whales. You should also check out the Point Amour lighthouse, if history is your jam, as it’s a very interesting museum of the coast’s history. Plus, they’ll let you go all the way to the top of the lighthouse on a guided tour.

Although this is definitely not the hairy-chested stuff that brings adventure riders to Labrador, the 140 miles (225 km) between Blanc Sablon and Port Hope Simpson are probably the most interesting, even if they are paved. 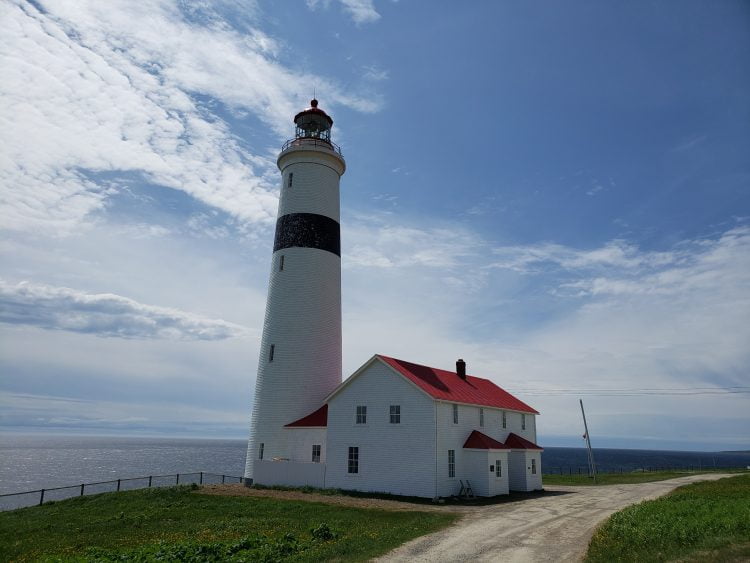 The coastal scenery in Labrador is a big change from the wooded interior. This is the historic Point Amour lighthouse, well worth the short detour if you’ve got an interest in history and beautiful views. A good place to spot an iceberg, or a whale.  Photo: Zac Kurylyk

After you leave L’Anse-au-Claire, your next stop is the border with Quebec, and then the town of Blanc Sablon, where you can get the ferry. Just follow the signs, and you’ll get there.

But—if you’ve got time to spare while you wait for the ferry, it’s also worth taking a spin down to the Quebec town of Old Fort. You’ll be traveling on the northern arm of Route 138, and it’s absolutely a blast here. It’s paved, with decent corners and interesting scenery. Just remember that, with only one road to patrol in and out of the coast, the police will definitely catch you if you get too crazy.

So, you’ve finished the Trans-Lab! If you saw our earlier article on Getting There and Back, you’ll know you’ve got to catch a ferry to Newfoundland now, and then Nova Scotia. Both these provinces are worthy of their own separate adventures so try to enjoy them if you can.

Otherwise—I hope this article has explained what you need to know to travel the Trans-Lab. Be aware that the unpaved section in Labrador is shrinking every year. The gravel sections in Quebec will likely be unchanged for a while, but the trip does get a little more civilized every year. For now, I think this is an excellent beginner’s trip, if approached sensibly, and a very different approach to adventure riding from the usual desert-focused ideal. If it sounds like it works for you, you want to get to the Trans-Lab as soon as possible, though, before it’s all paved.