The Trans-Labrador Highway is roughly 1,200 km long, running through the mainland section of the province of Newfoundland and Labrador. It starts at Labrador City, just after the end of Rt. 389 at the Quebec border, and (if you’re going clockwise) runs easterly to the coast, eventually joining up with Quebec’s Rt. 138. From there, you can grab a ferry to the island of Newfoundland, and head south on another ferry to Nova Scotia.

Adventure riders have been tackling the Trans-Labrador Highway for decades now. Some of the first two-wheeled attempts to explore the area came in the 1980s, when crazed Canadians took BMW G/S machines up to see how far they could go. For a long time, the road was almost entirely unpaved, which was a big part of the appeal. Now, the road is mostly tarmac, with only one unpaved section left between Happy Valley-Goose Bay and Port Hope Simpson.

Even now, in its civilized state, the Trans-Labrador is really “out there.” Stop your bike on the road, and you might not see another car go by for minutes . . . or hours. Unlike the Backcountry Discovery routes through the eastern U.S., the Trans-Labrador takes you hundreds of kilometers away from any form of civilization. That doesn’t mean the riding is as good as the BDRs, but it does mean you can really get away from the outside world, if you want. 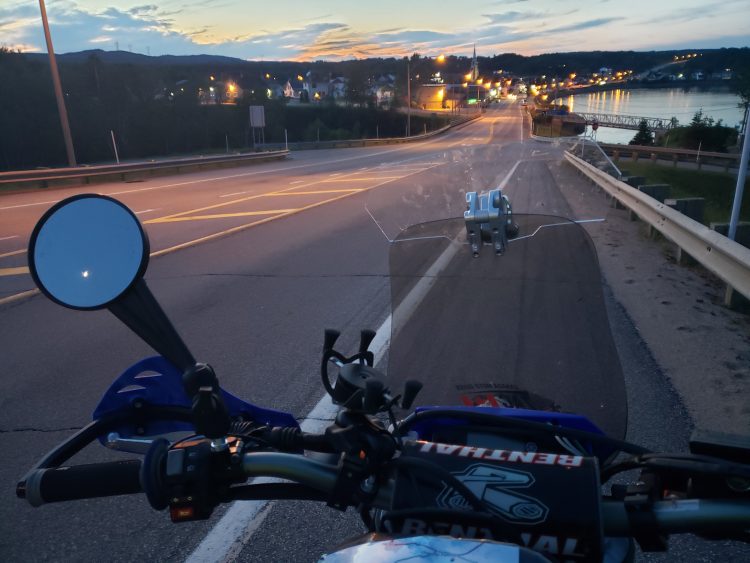 The road north from Quebec City takes you through several small towns, each with their own unique flair.

The road to Baie Comeau

(For the purposes of this article, assume you’re headed to Labrador via Rt. 389 through Quebec; if you’re getting there via Newfoundland’s ferry, reverse the directions.)

The paradox of Labrador is that while it’s the wilderness, it’s not actually that far, or that hard to get there. Let’s consider Quebec City as the starting point of an expedition to the Trans-Lab. Quebec City is only nine hours from New York City, and a lot less if you’re coming from New England, southern Ontario or some other population centers. No matter what bike you’re on, as long as it’s not a small-bore dual sport, you should be able to handle that in a day.

From Quebec City, it’s roughly two hours north up Rt. 138 to the Saguenay River. Cross the Saguenay, and it’s no more than three more hours to Baie Comeau. Of those five hours up Rt. 138, at least three hours of it are pretty good riding, with gorgeous scenery, good food, and the unique Quebecois culture making it more interesting to boot. 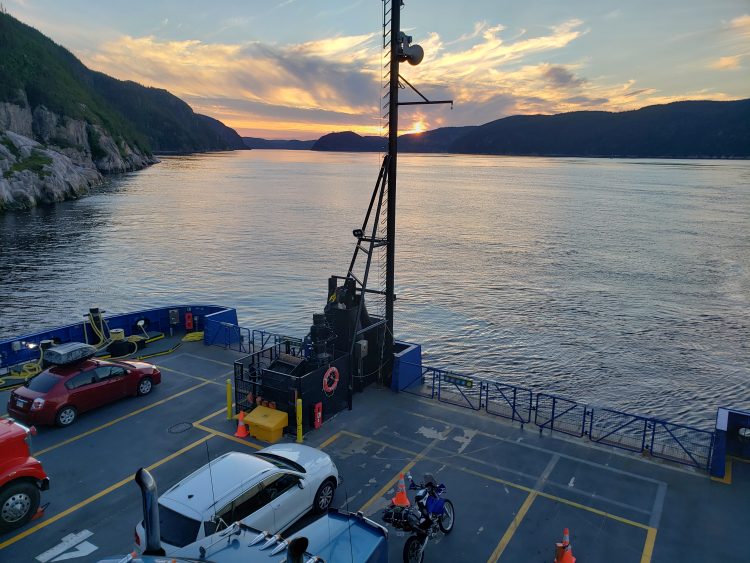 A sunset sail across the Saguenay River. This ferry is part of the provincial road system, and there is no fare.

Of course, you can get to Baie Comeau by ferry from Matane as well, giving you the opportunity to ride up via New Brunswick and then Quebec’s Gaspe Peninsula. No matter what route you take, you should enjoy it if you take your time. If you really lay on the throttle, it’s conceivable you could get to Baie-Comeau in a single hard day of riding from New York and other eastern cities.

Baie Comeau is the last big town you’ll see for a while, so once you arrive there, if you need anything (extra clothes, food, OTC meds, whatever), make sure you stock up. Although it’s in Quebec, Baie Comeau has a strong Anglophone culture, so you should be able to find someone who speaks English if you need it. 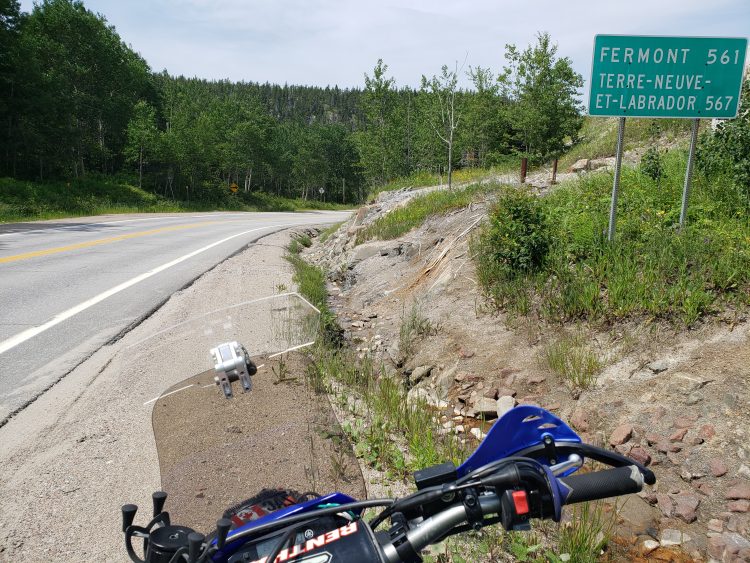 The road gets twisty very quickly as you leave Baie Comeau. This is almost immediately a wilderness area, although you will still see lots of traffic for the first section.

The road out of Baie Comeau

From Baie Comeau, you’re going to head north on Rt. 389. This forestry road is paved until you get to the Manic 5 hydro dam. It’s in surprisingly good shape, and it’s super-twisty with lots of elevation changes.

However, it’s also filled with logging trucks, and if you’re on a heavily loaded small-capacity bike, you may end up having to periodically pull over to let larger vehicles by. And don’t get silly ideas about sailing through corners with your knee down. Sooner or later, one of those corners will have a truck coming over into your lane.

There’s no fuel between Baie Comeau and the Manic 5 dam; there is a motel and gas stop at the dam complex, and once you’re there, the adventure really starts. The first gravel section of the trip starts right below the Manic 5 dam. Between the gravel and paved sections, there are 567 kilometers (about 350 miles) to travel between Baie Comeau and Labrador. You might be tempted to knock through this as quickly as possible, but most Trans-Lab vets rate this segment as perhaps the best riding of their whole trip, so don’t blow it by developing a bad case of white-line fever and rushing through. 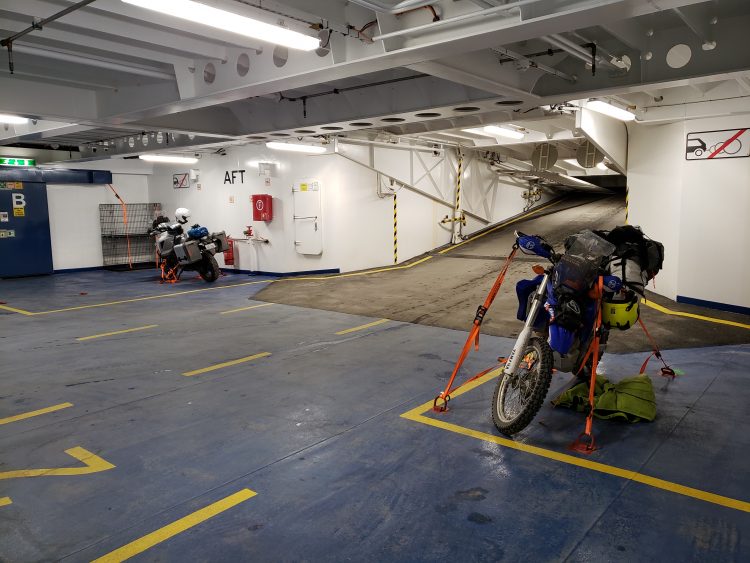 The ferry from Labrador to Newfoundland is quite affordable, and clean, with space set aside specifically for bikes.

The road through Newfoundland

After you’ve traveled through the wilds of Quebec and completed the Trans Labrador Highway, you’ll end up at the ferry to Newfoundland, which runs out of a terminal in Blanc-Sablon. Blanc-Sablon is actually just inside Quebec’s border with Labrador, and there can occasionally be mix-ups between all the time zones coming together here, so pay attention to that.

As of 2019, there’s a new ferry on the Labrador-Newfoundland run, just brought over from Europe (until the plugs are updated to North American style, you’ll actually need a travel adapter to charge your phone on board the boat). It’s a fairly clean boat, the trip shouldn’t take you more than a couple of hours, and you might see  a whale or iceberg if you’re lucky. The onboard cafe leaves much to be desired, sadly, but the fare is low (less than $20 for a motorcycle and passenger as of 2019). 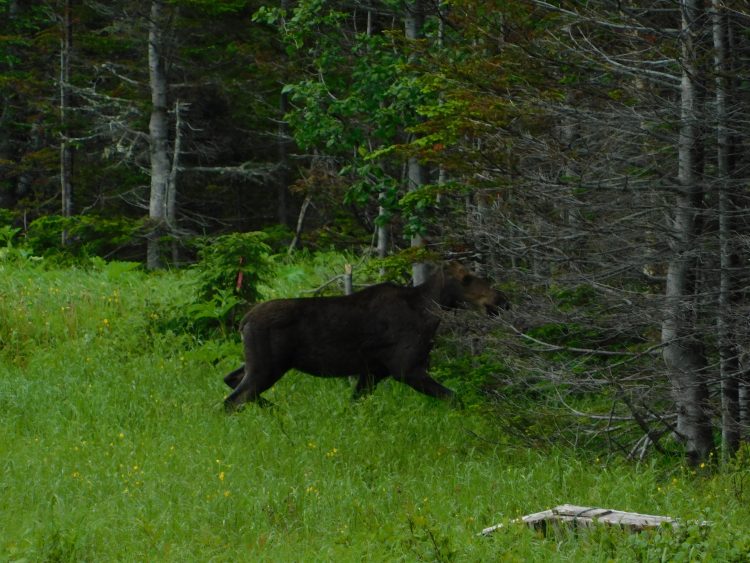 Once you are in Newfoundland, be very alert for moose. They are a roaming roadblock that can end your trip in a hurry. Here, one beats it off the pavement and into the woods as I snap a quick photo in northern Newfoundland.

The ferry lands you in St. Barbe, Newfoundland. This is the perfect jumping-off point for a tour of Newfoundland’s Northern Peninsula, including L’Anse Aux Meadows’s Viking settlement. Be warned: just because you’re out of Labrador doesn’t mean it’s necessarily any warmer. This is a remote area, and the weather can be a real challenge. There’s lots of fog, and cold, hard wind.

You can also ride east, towards St. Johns and all points in between. That’s by far the best option, if you’ve got the time. Otherwise, you’ll just have to head south towards the Port-Aux-Basques ferry. You can do this in a solid day of riding, depending when you start. Unlike Labrador, there’s gas available everywhere; don’t push your luck too far, but you should find fuel and food fairly easily.

There’s lots to see even if you’re headed straight south through Newfoundland, with plenty of opportunity for wild camping right on the shoreline, and everyone you meet will be friendly. There are many options for side roads, but natural choke points like the Gros Morne fjord, combined with a lack of human settlement, make much of this trip straightforward A-to-B highway riding. 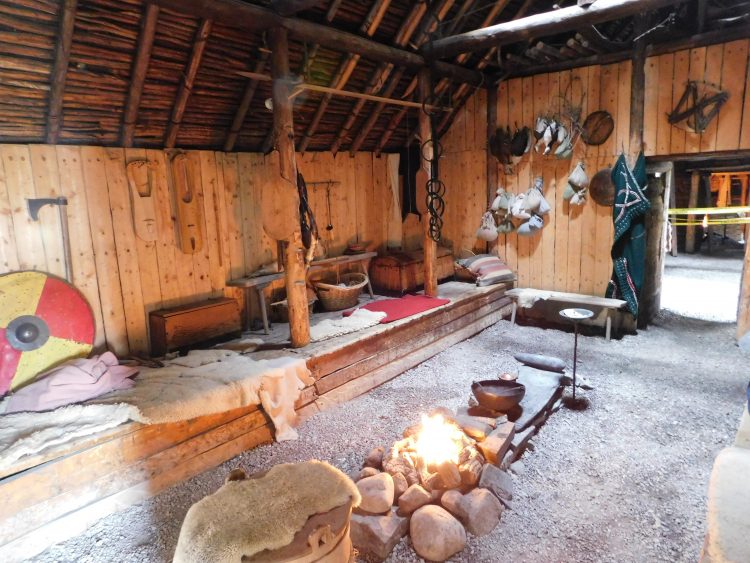 Inside the small Viking historical center, L’Anse aux Meadows, at the northern tip of Newfoundland.

The Port-Aux-Basques ferry will cost you around $100, and an overnight cabin rental is extra, if you’re on the night run. If you’re too skint for a cabin, try to avoid sleeping on the ferry deck until the crew has made their token rounds to keep everyone off the floor. You can also try sleeping in a seat, which is about as comfortable as it sounds. There’s food on board the ferry, but you’re better off eating in Port Aux Basques before you leave, or North Sydney when you land, or bringing your own on board.

The road through Nova Scotia

The adventure doesn’t have to end once you’re off the Newfoundland ferry, landed in Nova Scotia. Cape Breton Island has excellent street riding and fun off-roading as well. Add a couple of hours to your trip by taking the Cabot Trail, and then run Route 6 back along the Northumberland Strait. Or, if you’re not sick of ferries, you can take the Digby or Yarmouth boats to southern New Brunswick or Maine respectively. Nova Scotia, like the island of Newfoundland, really is worthy of its own extended visit, but that doesn’t mean you can’t enjoy a taste of fun on the way home.

By now, you’re in civilization proper, which means you should have no trouble finding accommodations or anything else you want. 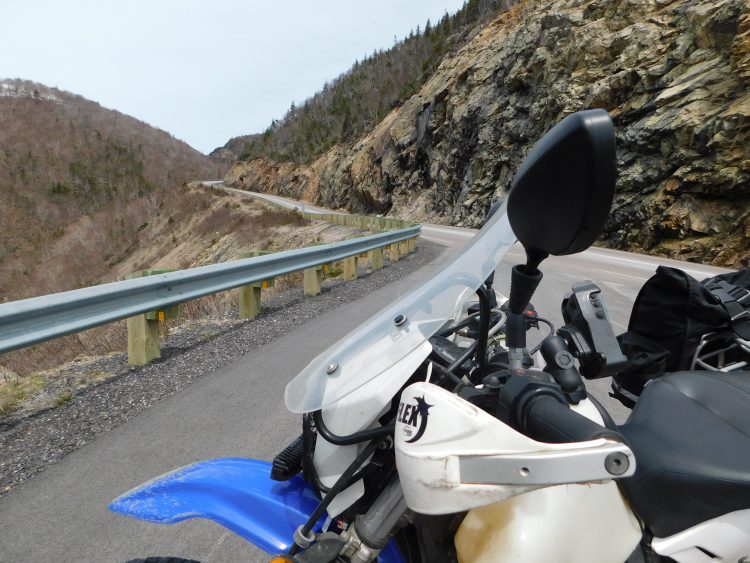 Of course, Cape Breton Island and the rest of Nova Scotia have plenty of other great riding to offer on the way home.