Arrived at Maria hotel in Krasnoyarsk and I’m lying in a Russian Basement – happy as a clam. 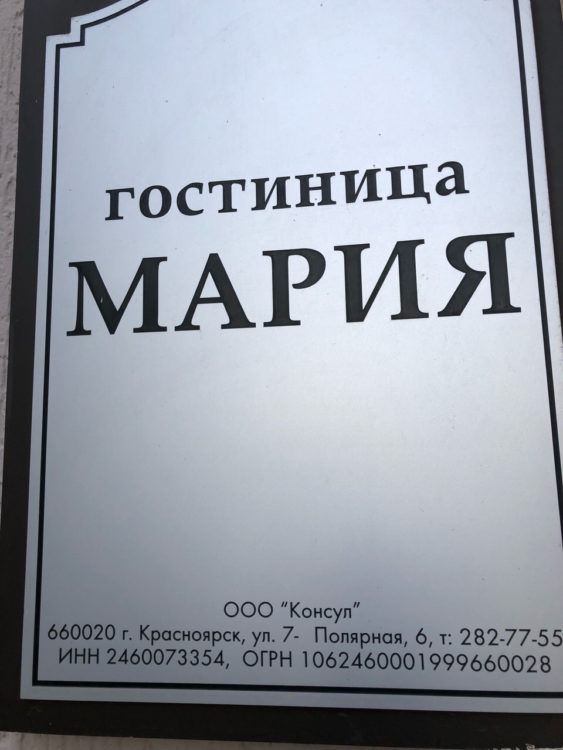 Definitely a long ride today over 400 miles. I’ll let GoogleMaps do the exact math.  On arrival I saw 3 adventure bikes, DK plates, oddly I never intersected with the riders.  They were down there in the basement, I could hear them.  I cooked the hell out of some pasta but they never appeared. 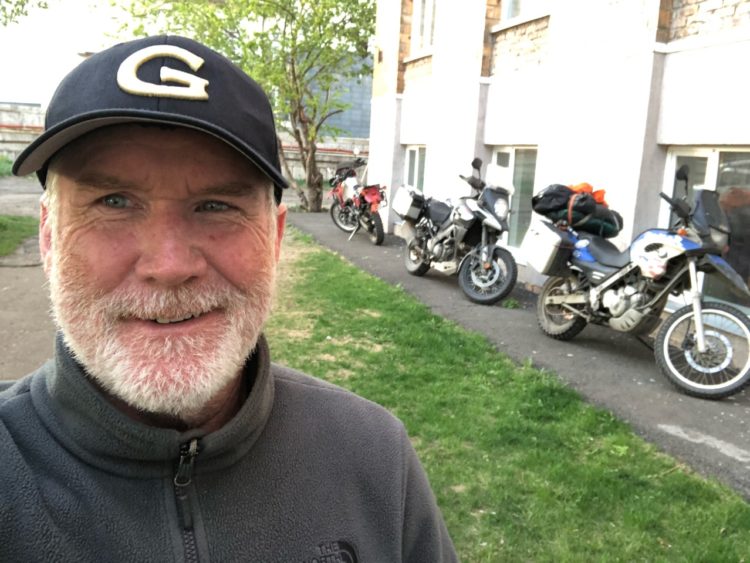 Over the last 1/2 decade I worked a lot with Danes just north of Copenhagen, a town called Lyngby.  Good engineers.  My guess was these riders were headed toward where I came from so I left my hard copy maps of Mongolia at their doorstep. 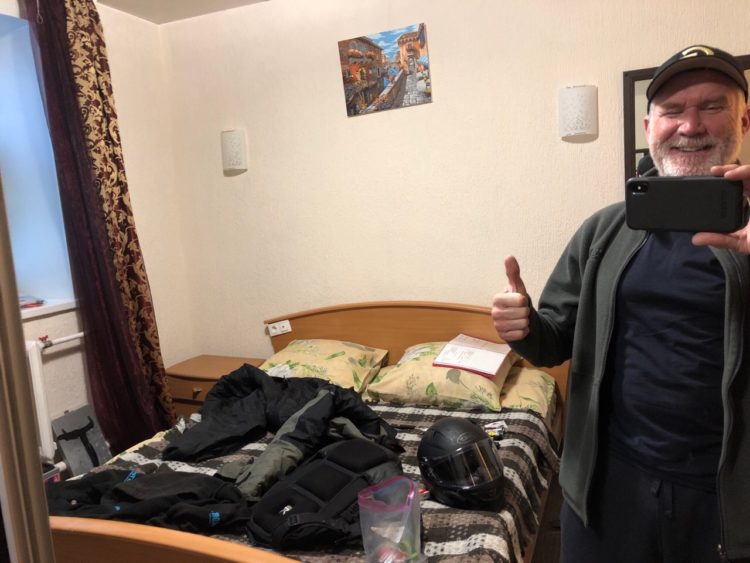 WARNING, I’m probably going way off the curb on this one so if your sensibilities are easily piqued today best to select your favorite reading material next to the throne rather than take a walk on the wild side (sorry Lou).

So, I debated whether or not to write this one up, not because Vicki will worry, she’s seen it all, but because I seem to attract this stuff. Anyway, here goes. There’s a protocol on this single 2 lane highway. The trucks rule. They moderate traffic. In the rear they definitely let you know if it’s ok to pass. Coming opposing they light up in all kinds of ways to warn that someone is passing and won’t make it. So, I’m mindful.

Tangent time. There were hours this morning when I was completely alone. Rolling smoothly through some treed corridors snaking through Siberia and my mind wandered (last chance to grab that People Magazine in everyone’s favorite reading room). I got to thinking there are maybe 3 irrefutable forces in the universe. First of course was Einstein – let’s face it – he nailed it, so that one stands on its own. Next is “The Force” from Star Wars. For me that was the year between high school and University. And “The Force” ended with the ridiculous side effect of having blotter acid named after it. Now if you don’t know what blotter acid is – then good. Joe Faro was a guy in High School who owned a Gold Wing – making him untouchably cool. Joe turned up with a small sheet of black paper covered with white Storm Trooper helmets blotted onto it. As he sniped off a single dot sized helmet he smiled and said, “may the force be with you”. Not sure that’s what George Lucas had in mind but it made my screening of the movie pretty great. And yes in those years make no mistake – I inhaled – no getting around it.

The final force I’ll talk about is “The Playlist”. On our most recent sailing adventure Gerry’s son Robert joined us complete with Kegan’s Playlist. Kegan Shea (another of these damn Yellowknife Canada natives – crazy bunch) gave only one instruction, let the playlist do its job. We strayed given that the first song sounded like Ricardo Montalbán’s theme song to sell a 1978 Chrysler Cordoba. Big mistake, because once we returned to the playlist – all was indeed right with the world.

Ok, so as those tangents drifted through my mind, I crested a hill and saw off in the distance a lone big rig but he was lit – big time. Odd, no-one else around. The next hill revealed why, a snarled mess of 2 cars and a big rig. Eyes straight, look for glass, but the one car was bad and they were working to get the person out – without urgency. My blood ran cold – literally. Life transition near you doesn’t happen much and when it does it sucks. The other car held the living and I took some hope from that. Move on.

The only other thing of note today was some mutts tried to steal my helmet. They reminded me of Rumploe’s clients “The Timson Clan” of “minor villains” (primarily thieves). I had gone to the gas station outhouse (yuk) and upon return – no helmet, so I peered into the blacked tinted windows of the Russian version of “The Timson Clan” being the only car there and this big toothy Russian grinned and pointed at my helmet as much as to say “oh yours?”. I took it back, smiled, waved and was on my way. Those are the highlights, and as Red Green used to say – “If you aren’t handsome then at least be handy”.

And finally, speaking of handy… My right hand started getting cold today.  I checked the wires for the gloves, sure enough, frayed.  A job for tonight in the room.

Glove Repair in a burned out basement in Russia – The Monocle

Glove Repair in a burned out basement in Russia – JB Weld