‪We love giving you amazing news of our recoveries etc but this is an important one to point out!‬‪We are at a time where if you blink you lose‬!‪Secure your bikes at all times...‪It takes 3 seconds to break the steering & push it away.‬

We’ve recently published several articles about motorcycle theft and crime in London.  But now there’s a bit of good news about the recovery of stolen motorcycles in the area coming from a group calling itself SMRL.

Two anonymous men have decided to assist owners and police with the recovery of some of London’s stolen motorcycles.  The men call their organization SMRL.  It stands for Stolen Motorcycle Recovery London.

And they have been making a dent in motorcycle theft and recovery.  Since the organization’s founding in May 2019, they have recovered at least 137 motorcycles from the streets of London.  The best part, the bikes were recovered free of charge to the owners.

Not only the recovery is free, but the storage of the stolen machines is also free.  That’s different than when police find the bikes and contracted towing agencies charge the victims of the theft for storage.

SMRL has an extensive network of people on social media who travel throughout London daily.  Using this in addition to private sector data, SMRL has access to stolen vehicle information, which is updated daily. 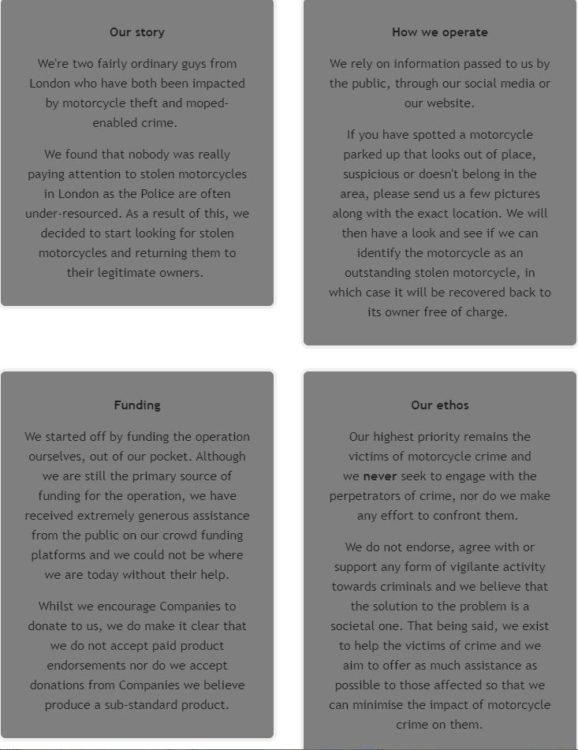 Recently, using tips and a GPS tracker installed in a stolen motorcycle, SMRL was able to track down and ultimately recover several complete bikes.  The machines and parts were hidden in an office complex in East London’s Isle of Dogs section.  The group called the chop shop “commercial grade.”

Inside, SMRL found four complete motorcycles as well as three motorcycle frames.  A machete and drugs were also found inside the chop shop.

Donations fund 100% of SMRL’s operation.  SMRL does ask for donations from the people whose bikes have been recovered.  Some give while others don’t.  The two SMRL men cover the remainder of the costs out of their own pockets.

For more information on SMRL, you can go to their website.