It’s not easy these days, choosing equipment for your RtW bike. But what if there simply wasn’t any?

Have you heard the Monty Python ‘Three Yorkshiremen’ sketch? They compete to tell more and more outrageous stories about their poverty when they were young, ending with bizarre claims like living in a hole in the road and being beaten to death by their father instead of getting breakfast. Let me regale you with my “Two Australians” sketch along similar lines.

In 1977, when my friend Charlie and I began to plan our ride from Sydney to the Guinness brewery in Dublin and then home via America, there was no such thing as an adventure bike. Neither were there dual sports bikes, with the possible exception of Honda’s XL250. The Yamaha XT500 was still quite a few months away. Other than that, there were dirt bikes for the competition of one kind or another, like Suzuki’s PE series, and there were touring bikes like BMW’s RS. 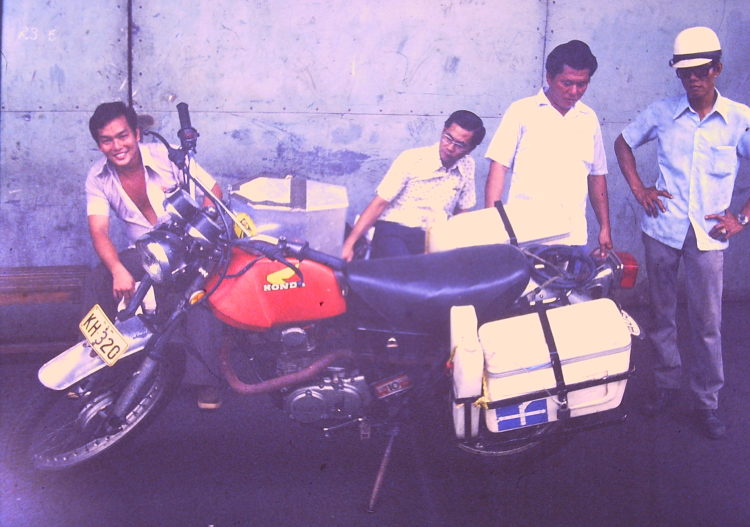 Charlie’s bike is loaded aboard the MV Kota Singapura for the trip from Perth to Singapore.

We knew that we would have to ship the bikes by air for one sector of our trip – it was impossible to get through Burma – so we needed a light bike. No RS. We also needed something that made at least a small concession to comfort, so no PE. As it turned out, the choice was easy because Charlie already had an XL250 with an Acerbis long-range tank. I bought a bike and a tank as well and we began to plan luggage and other adventure-type improvements.

There were no such things as adventure accessories like aluminium expedition panniers, but worse yet there were no catalogues in which we might have found inspiration. Neither were there other adventurers from whom we might have stolen ideas. We had to make it all up as we went along with the planning. 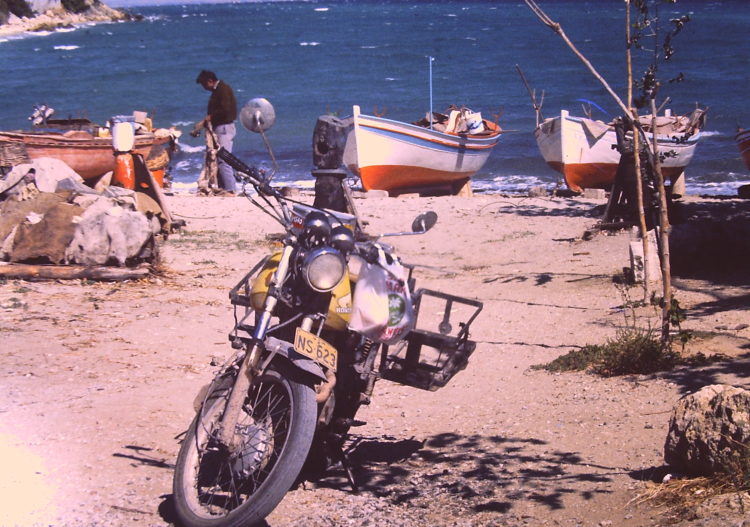 My bike with luggage removed looks odd, but you can see the welded-up cages.

Once we were under way we met a few other adventure riders, but they were riding things like a Harley-Davidson WLA with sidecar (impractical for air transport), a Honda 750 Four (incapable of running on the appalling petrol) and another XL250. Oh, and a pair of Velo Solexes. They were using camel panniers made from carpet which looked pretty cool but wasn’t really practical. 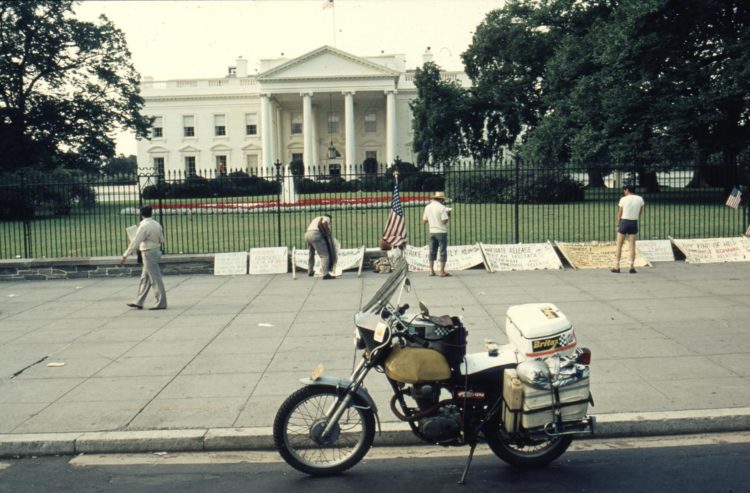 Recognise the location? I unfortunately can’t remember who the incumbent was.

We bought small-ish rectangular plastic panniers. Faced with the problem of mounting them securely to the bikes, we decided to solve several problems in one go. As well as fitting the panniers securely, we wanted some kind of crash protection. We also wanted to carry water and extra fuel. The solution was to have cages for the panniers made up from mild steel. A strap across the top locked them and locked them onto the cage. Smaller holders on the front of the pannier cages held four litre plastic reagent containers from a haematology analyser donated by an ex-girlfriend. One held water and the other additional fuel. They were secured with thin, swaged steel cables. The whole thing was locked with one padlock each.

The reagent containers weren’t the only donation we received. Charlie’s friends at university made up aluminium boxes which fitted neatly onto our Acerbis tanks. They locked with another padlock and had holes cut into the bottom which fitted over the fuel caps. That held them in place when the caps were screwed down. Their padlocks thus didn’t just lock them, they also locked the fuel fillers.

Our friendly welder made up lockable tool boxes for us, as well, which tucked into the sides of the bikes below the seats. All up, then, each bike had four padlocks which secured all our storage. 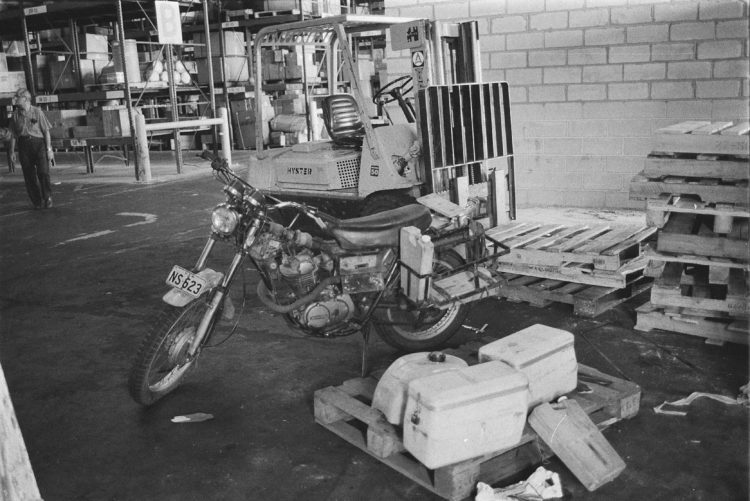 Reassembling my bike in the Customs shed at Newark after its flight across the Atlantic.

Changes to the bikes were pretty simple. Apart from fitting the long-range tanks, we moved the high front guards closer to the front wheels and fitted more tucked-in exhaust headers with the original mufflers. Both bikes were shod with Trials Universal tyres.

Because we intended to camp part of the time, Charlie’s bike had our tent and some other camping gar strapped to the rear rack. My bike instead held an aluminum camera case. Later, on my solo ride through the USA, I fitted a windscreen and a large top box.

My one complaint was the seat. It was diabolically uncomfortable, and a thin lambskin I bought in northern Pakistan didn’t help. But there wasn’t much I could have done about it anyway; neither air seats nor complete replacements were available at the time. I’m sure the three Yorkshiremen would have been able to come up with a description of my backside after a day’s ride… 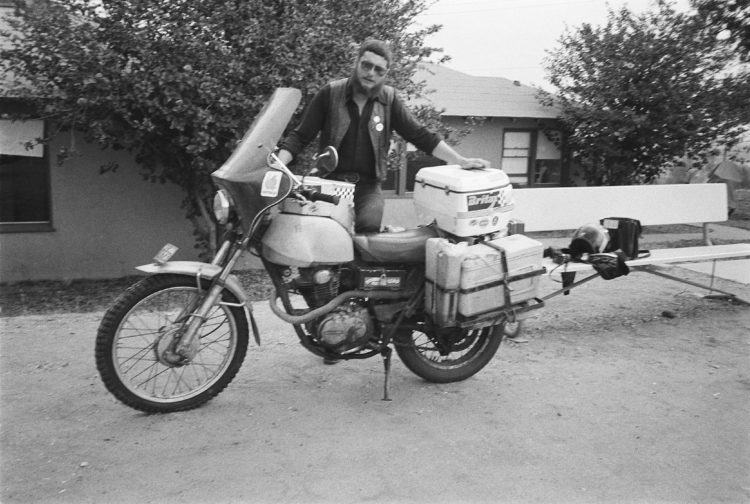 On my way to hand the bike over to Honda USA in Los Angeles who kindly volunteered to fly it home for me.