So you say you’re fast, really fast, on track. Or even on the street. Well, now’s your chance to prove it, with an extremely competent superbike that’s up for sale in Northern Ireland.

The bike is a BMW HP4 Race, up for grabs at Charles Hurst BMW Motorrad. It was set up for Michael Dunlop to run at the 2018 Isle of Man TT, but it was never raced there.

Even without the extra attention of the Tyco team, this is a highly desirable motorcycle.

The HP4 Race debuted in 2017 at the auto show in Shanghai, for some reason. Perhaps BMW was trying to grab the eye of China’s billionaire elite, because the reality is the average buyer in any market is not going to ever save enough to get within sniffing distance of one of these machines when brand-new. This 2018 model, as seen here, carried a $78,000 MSRP when it was new in the US.

It isn’t street legal. It isn’t even legal for World Superbike. It might be just the ticket for the Isle of Man TT, or Ulster GP, or Macau GP, or … Photo; DoneDeal.Co.UK

What did you get for that money? Well, you didn’t get a street-legal motorcycle. The HP4 Race, as the name implied, was made for the track.

But you didn’t get World Superbike homologation either. Although this is basically a factory superbike that any schmuck with the money could buy, it was not legal for WSB competition.

So who would want this bike? Errr, IOMTT racers, perhaps, like Michael Dunlop? Leaving aside such silly questions, let’s take a look at what makes this machine so unique. You could start pretty much anywhere, but we’ll begin with the carbon-fibre bits. This wasn’t the first motorcycle to hit the market with carbon-fibre frame, wheels and bodywork, but it was one of the earliest. BMW actually claimed this bike was built to introduce carbon-fibre to motorcycling, and that’s why they used so much. Errr, OK. Regardless of the reasoning, it kept weight down, and BMW said it was carefully engineered to have just the correct amount of frame flex.

This particular bike comes with a Suter swingarm. 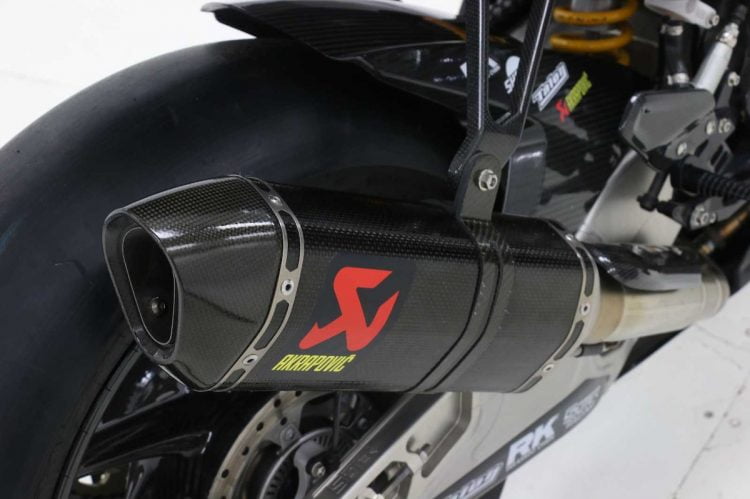 Every little bit on the bike is a high-spec part built for racing. Photo; DoneDeal.Co.UK

To make the frame even more trick, BMW built in adjustability for the tripleclamp offset, rake angle, trail and swingarm pivot height. It’s just about as adjustable as any WSB machine.

The engine was obviously based on BMW’s S1000 RR—or, more accurately, based off the racebikes that were based on the S1000 RR. BMW has crate engines it sells to race teams, and the HP4 Race’s inline four was based on a mash-up off these. It made a claimed 215 horsepower at 13,900 rpm. That’s within striking range of the WSB machines BMW was building then, and it came at a price: BMW recommended the engine be replaced every 5,000 km (you could rebuild it, but that would cost more money). The engine had a GP shift pattern (one up, five down). There’s an Akrapovic 4-2-1 race exhaust as well.

Suspension was also top-shelf stuff, with FGR300 World Cup forks from Ohlins, and a TTX36 GP shock, as seen on some World Superbike and MotoGP teams. There’s also an Ohlins steering damper. If that’s not enough for you, the seller of this particular bike is also offering to set the suspension for you after purchase … 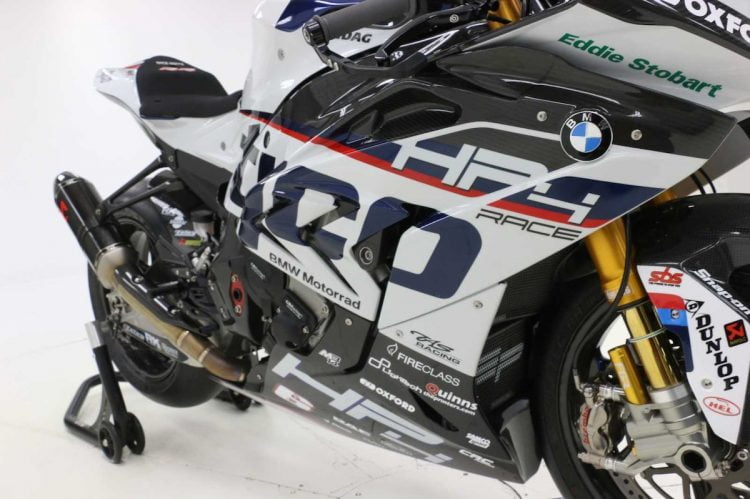 The livery is Tyco’s take on standard BMW racing paint for that year. Photo; DoneDeal.Co.UK

The brakes were also pro-level, with Brembo GP4 PR monobloc brake calipers up front, but no ABS on the 2018 model.

Given the computer-heavy nature of modern superbike racing, it’s a given this machine had plenty of electro-trickery built in. As you’d expect, it’s got wheelie control, launch control, engine brake control, quickshifter, all that stuff; some of it is managed by selecting various race modes, but given that this bike was breathed on by the Tyco race team, who knows what’s been done to it? This bike also comes with a 2D datalogger/lap timing system.

Now, the seller says this machine was built for Michael Dunlop’s 2018 campaign at the Isle of Man, but never raced. That doesn’t mean it hasn’t seen hard use elsewhere, of course, but the ad does claim zero miles. The asking price is £50,000, and that’s not bad at all. That works out to roughly $65,000 USD, which means this machine has been tuned up by Tyco and seen the price drop the equivalent of $13,000 from what its US MSRP would have been. Not, of course, that the Tyco mods may suit everyone, but the owner is offering technical assistance to set this bike up for the buyer. Chances are, though, that this machine will appeal to the kind of buyer who already knows what they’re doing with regards to track setup. 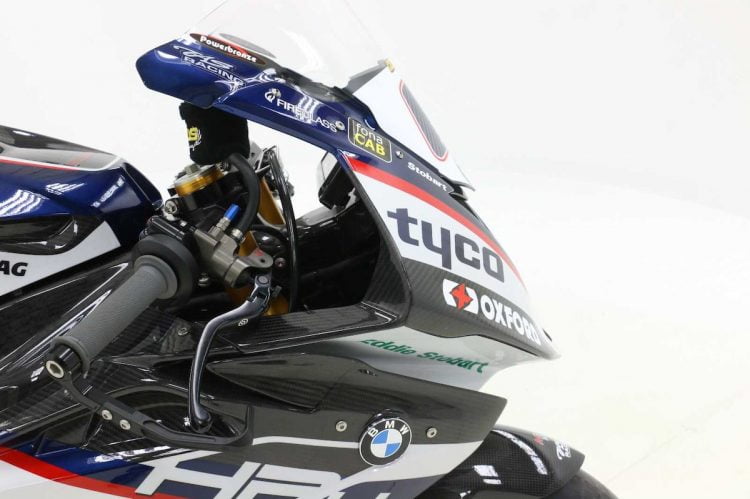 With only 750 of these made, this is a rare opportunity to buy one that’s also got some unique history. Photo; DoneDeal.Co.UK

But maybe it won’t go to a track at all? With only 750 of these bikes made, it’s already super-rare, and there are even fewer of them that have this kind of street circuit racing heritage. A Jay Leno-style collector would be champing at the bit to get their hands on this sort of ride, especially at its price. For more information, if you think this is for you, check out the ad. We’re sure shipping could be arranged to anywhere in the world.