When I first saw navigation towers and paper roadbooks at the Dakar this year, it all looked so alien to me I thought I’d never get how those things worked. But, preparing for my very own rally this summer, I have no choice but to try and decipher rally navigation, and it turns out, it’s simply fascinating.

Meletis Stamatis, organizer of the Hellas Rally in Greece, the biggest cross-country navigation rally in Europe (did I mention it’s open to adventure and dual sports riders?), has kindly agreed to help me understand roadbook navigation – at least in theory. 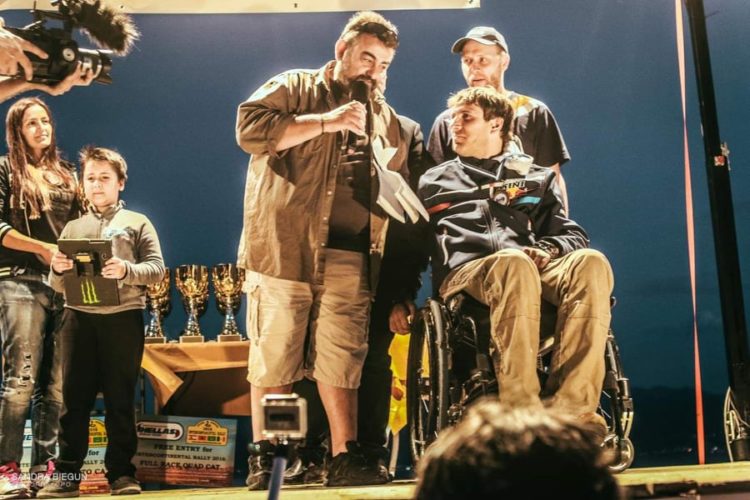 Meletis creates rally roadbooks himself and says it’s like a language that rally organizers use to tell you about your route.

How well you listen is up to you.

All navigation rallies use roadbook navigation, but there are two kinds: paper roadbook, like in the Dakar, and electronic roadbook that is now used in many rallies worldwide. 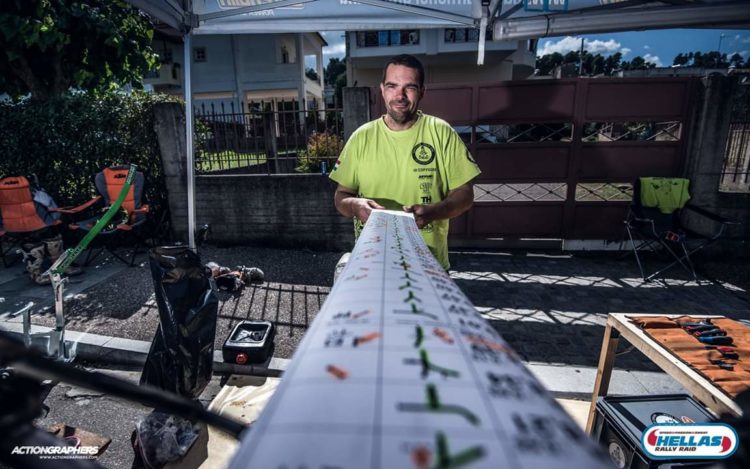 “It’s been a really big discussion for the past two years about switching to electronic devices. ASO and FIM think it’s fairer for everybody to use paper roadbooks because you don’t need any specific device for them and can buy something on the cheap, plus, it’s indestructible, you can use the paper scroll manually if it comes to that whereas electronic devices can be cracked or smashed.

Personally, I think the electronic roadbook is more apt for the modern times. Every year, we print 3.6 square kilometers of paper roadbook just for the Hellas rally, so for the Dakar, it’s probably twice if not triple that amount. So electronic roadbooks would be more environmentally friendly, and organizers would save money. We paid 9000 euros (over $10,000) in Hellas just for printing roadbooks, and Greece is cheap. In Germany, as an example, it would be 30-40% more expensive”, – Meletis explained.

“At the Hellas Rally, you can use either. For electronic roadbook, there are a few devices on the market, or you can simply use your tablet. We give you a PDF file that you upload on your device, and it’s exactly the same as what you see on paper. Phones cannot be used for that because the screens are too small, but tablets work just fine.

It may also eliminate mapmen in the Dakar, for example. Mapmen are highly paid professional navigators who find the fastest route and easiest shortcuts for their riders, making those riders faster than those who do their own roadbooks and navigation.

With an electronic device, you can give the roadbook to the competitors in the morning electronically, and nobody else but the rider can touch it.

As an example, Rally Maroc organizers gave riders roadbooks that were already marked, and top riders loved it because it’s then fair to everybody, everybody gets the same chance. Then you can really see who’s a good navigator and who’s a bad navigator. Thing is, the big teams will never stop spending money on being faster, so preventing mapmen would give everyone a fairer chance. It would give privateers a like Stefan Svitko a chance, you know? Not just the top ten factory riders”. 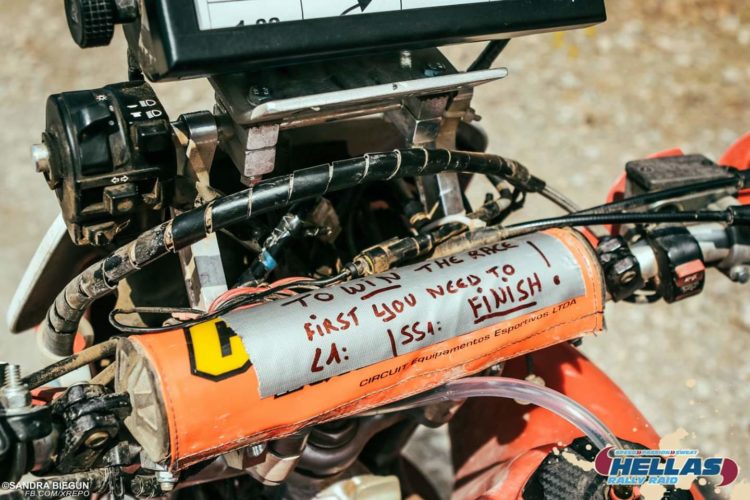 According to Meletis, the roadbook gives you information in three parts: the first tells you about your distance from one change of direction to another and total mileage you have covered.

Second section in the middle indicates how the direction changes.

The third section is full of additional notes: speed limit, danger, a bump, a cut off dune, a hole in ground, your waypoint. Here, compass degrees are used as reference because if you’re in the desert, you will have very few landmarks (if any at all). 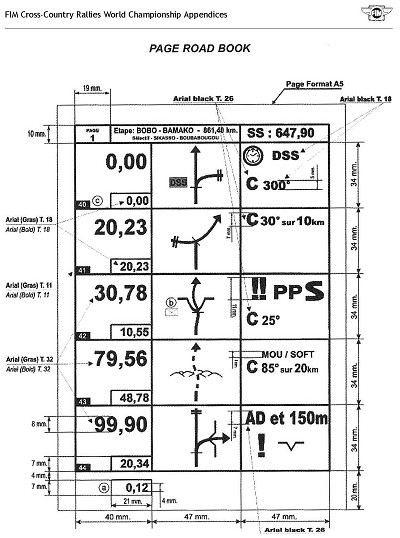 Roadbooks are marked with symbols. There is a big index of abbreviations – about 100-110 symbols describing almost everything: level of danger; visual reference points like a house, a fence, a cluster of trees; sporting issues – start, finish, checkpoint; symbols for terrain – rocks, bumps, indications of whether the track is twisty, narrow, slow, fast, and so on. 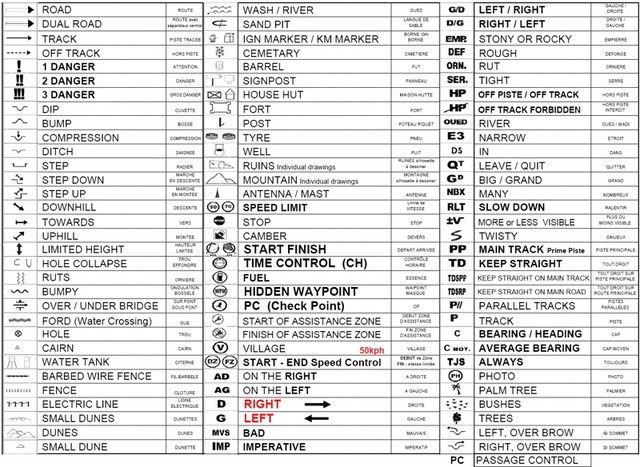 For motorcycles, your roadbook paper roll is about 15 centimeters (about 6 inches) wide, 14-18 meters (40-60 feet) long for each day. You read it from left to right, top to bottom, just like a book. The roadbook is put in an aluminum box and it’s being scrolled with Tripmaster, an instrument that measures distance in tens of meters.

You can scroll the roadbook manually, too, if need arises.

“An electronic version is exactly the same thing, you just have a different media – a tablet instead of aluminum box”, – Meletis explained.

There are two options to place all your navigation devices on your bike: your handlebars or your frame.

“The weight of it all is about 5-6 kilos, which is significant, so putting your navigation system on your handlebars will greatly affect the handling of the bike as well as its suspension. Placing it on the frame reduces the strain, and the bike handles better. The big fairings are there to protect your navigation system as well as improve aerodynamics – in a rally, you want to be fast. 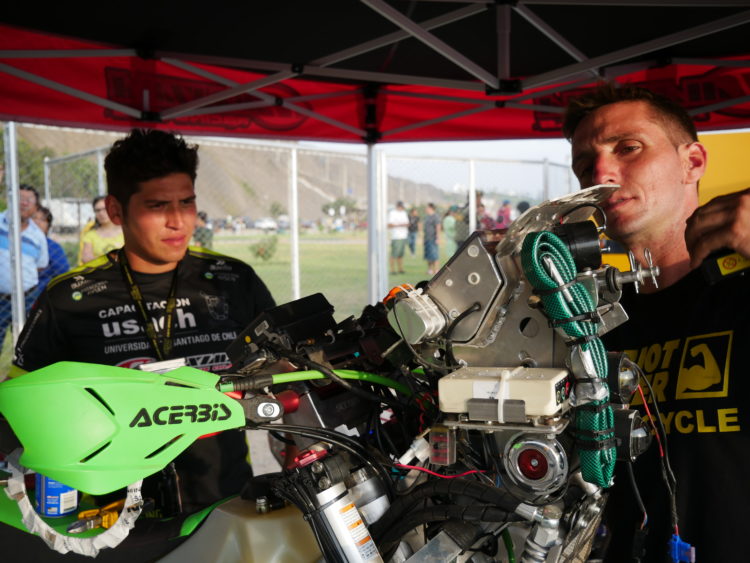 A navigation tower can be installed on any bike, it’s just a matter of welding. It all depends on your fairing, and the size of your bike. It also depends on how tall you are. For example, Toby Price is a big dude so he will need a different tower than Matthias Walkner who is much smaller.

You will be spending more time standing up than sitting down, so keep that in mind when installing your navigation tower.

In Europe, there are at least 5-6 companies that make Tripmasters, more of them make roadbooks, and at least 10-15 companies make rally kits and navigation towers, so it’s really not difficult to find one you like. Some adventure riders like Lyndon Poskitt have a navigation tower installed on their rally bikes, but they travel with them, too. That’s because you have better aerodynamics and better sitting and standing position.

You can install the navigation tower on your bike yourself, nowadays, they are really quite simple and just about anybody can do it. Of course, you can always get help, any mechanic should be able to install a navigation tower”, – Meletis said.

How hard is it to learn to navigate by roadbook?

“Before his Dakar performances, Matthias Walkner was a world motocross champion. In 2014, he did his first rally, which happened to be the Hellas Rally. The first time he saw a roadbook was on his flight from Vienna to Athens, and he won the rally. Last year, he won the Dakar.

So that’s one example. On the other hand, some people have been doing rally raids for 15 years now, and they still get lost. Being a great navigator is about talent, orientation skills, spatial thinking, practice, and your riding ability because if you’re a great rider you can concentrate more on the roadbook”, – Meletis explained. 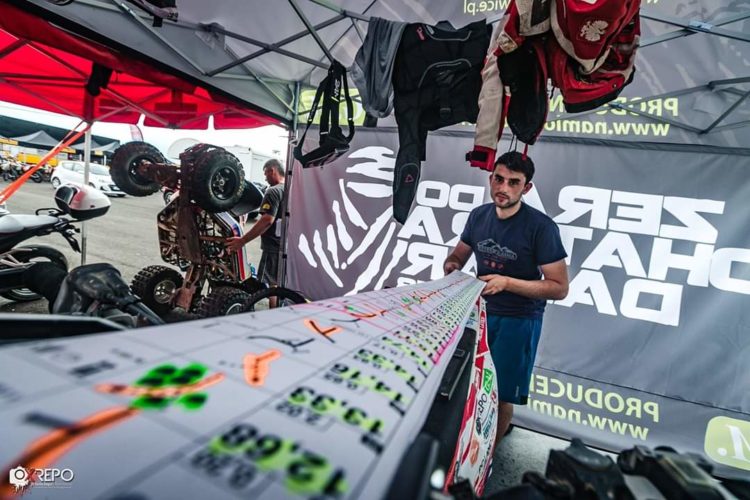 “There has to be a fine balance, though. Often, accidents happen because riders stare at their roadbooks too much instead of paying attention to the riding or to what’s coming ahead.

I would say, spend a lot of time on your roadbook, mark it carefully. For some, reading the roadbook is like seeing a video of your route, and for others, it’s just a bunch of symbols on white paper. Try and see that video.

The balance between your navigation ability and fast riding is what makes champions. If you’re a great rider, you can go fast and still pay attention to your roadbook. If you’re slow, the roadbook will slow you down even more.

But at the end of the day, roadbook navigation is not astrophysics. Historically, the roadbook symbols are based on the signs of the British highways in the 1920’s. So if twentieth century British motorists could make sense of them, so can you”.

The Language of Navigation

Roadbooks are always provided to riders a day before each stage, and according to Meletis, studying it carefully and marking it is extremely important.

“It’s important to spend quality time with your roadbook and mark it. What I mean by that is, you need to truly understand what the organizer is trying to say. I think of it this way: a roadbook is like a language, and as creators of roadbooks, rally organizers are very different even if we use the same index, rules, and symbols. The language is the same, but perhaps one organizer has a better vocabulary, while another’s accent is easier to understand. So every rally has a different roadbook, and it’s very important to understand what the organizers are telling you.

For example, you need to know which information in the roadbook is perhaps useless to you. Say I’m creating your roadbook, and I have a change of direction in seven kilometers. To help you out, maybe I’ll put some additional information there, like a note with a church or a tree every two kilometers just to assure you you’re on the right track. These additional markers will help you if you aren’t certain that you’re going straight, but if you are sure you’re headed in the right direction, looking for that church or tree will only distract you and cost you time, so you need to think about this and maybe even delete this extra information.

Another example: maybe I put a little note in the roadbook because the road ahead is twisty. Lots of experienced, fast riders won’t care – they will go fast anyway. But if you have less experience, you’ll see that little note and perhaps you’ll slow down, and I will have prevented a crash.

Finally, sometimes, the same roadbook will be used by different vehicles – some stages are the same for trucks, cars, bikes and quads. So, I will put a note that the road is narrow, for example, and this message will be there just for the quads, not you, because as a bike rider, you don’t care how wide the track is.

So you need to know this language, to really pay attention to nuance, and do your own roadbook because it will be different from all the others, it will be specific to you and your ability”. 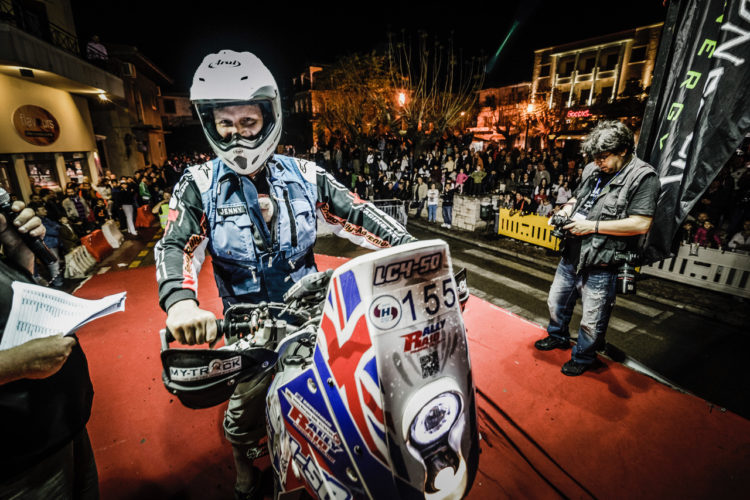 The best practice to understand roadbook navigation, Meletis says, is doing a rally.

“You can have all the theory you want, but actually using your roadbook in a rally will be the best lesson imaginable. At Hellas, we have a Lite class where you can use your GPS additionally; there are no trophies and no winners in Lite, so we don’t monitor GPS use, it’s entirely up to you. But there’s a reason I called the class Lite. It’s like with food, you know, all these “lite” products… they just aren’t the real deal. Real bacon tastes better. Real rally feels better”.

Rally camp: if you’re determined to learn roadbook navigation, Hellas Rally organizes Rally Camp, a week of theory and practice of roadbook navigation. You have one day of theory, two days of practice on a bike, and then two days of real rally conditions to really put your new skills into practice. Rally Camp is run throughout the year. For more information, contact the Hellas Rally organizers.