It was twenty years ago today – or roughly that – when I owned a Cezeta Type 501 scooter. Even though this was in Australia, it was a genuine Cezeta – not the copy made in New Zealand and called an N-Zeta. Pity, really, because mine had a 175cc engine while the Kiwi version sported an extra 25cc and significantly more power. I bought the scooter in fairly derelict condition and restored it before featuring it in a magazine I was then editing.

Almost immediately, and before I had much of a chance to ride it, I received an offer to buy it. Normally I would simply have said no thank you, maybe later, but this case was different. The would-be buyer had recognised my Cezeta as the one which he and his wife had used for their honeymoon. He desperately wanted it back to surprise her.

What could I do? My Cezeta went to Mount Isa in outback Queensland, and I bought an Indian Chief to restore instead. I’ll tell you about that some time. 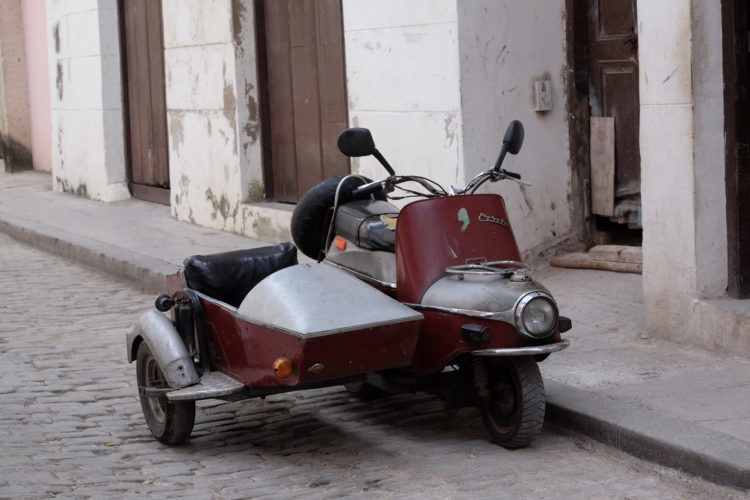 Hard worker: an original Cezeta Type 501 in a Havana back street. (Photo: The Bear)

My next notable encounter with a Cezeta Type 501 was in Cuba, fifteen years later. I was strolling along one of the back streets of Havana, looking for the bar where Che Guevara used to write his articles, when I came upon one of the venerable scooters fitted with a very clearly home-made side car. I took a few photos and went off to Che’s bar where I enjoyed a quiet Mojito and a bit of reminiscing. Was that couple in Mount Isa still married, and did they go on an occasional ride on ‘my’ Type 501?

And then, in 2018, I went to INTERMOT, the international motorcycle and scooter show in Cologne and found an entire stand apparently devoted to the Cezeta Type 501. Only it wasn’t the 501, built from 1957 into the middle ‘60s. It was the Cezeta Type 506, still made in the Czech Republic and visually identical but powered by an electric motor.

The look is definitely odd, but not unattractive in a ’50s sort of way.

After a good 60 years, the scooter had returned as an electrically powered model. The original Cezeta company had stopped building motorcycles and accessories in 1997, but Englishman Neil Eamonn Smith was determined not to let the Cezeta scooter and its unique (and, to be honest, weird) shape die. In 2013, he founded his own company, called Cezeta Motors, near Prague which he intended to revive the strange but somehow charming scooter.

The handgrip lets you choose riding modes in a very classic way.

It was the rather daring look, which probably takes a bit of getting used to, which he wanted to retain. The guts of the scooter would be something new and timely. The electric version, which carries the model designation ‘Type 506’, looks almost identical to the original scooters first built in 1957. Smith felt that the new version would find buyers in a by now highly competitive electric scooter market precisely because of its chunky look and odd silhouette. Its look is nothing if not classic.

Smith’s company in Prostejov in the east of the Czech Republic is also keen to incorporate more of the classic look and feel by taking the appearance of both the instruments and the controls from the original model as much as possible.

I nearly got to ride a Type 506 a few weeks ago when I was in the Czech Republic, but the heat wave that was enveloping central Europe got in the way. Figures for the scooter sound pretty good, though; there are two models, differing only in their power output. With the 15hp motor and a battery rated at 6kWh, the Type 506 should be able to reach a top speed of 120km/h, and Cezeta gives the maximum range at 100 to 150 kilometres. The scooter is classified as 125 for registration and insurance purposes. The second, slightly less powerful model, should be able to reach 85km/h with a maximum range of 80 to 100 kilometres with its 4kWh battery. 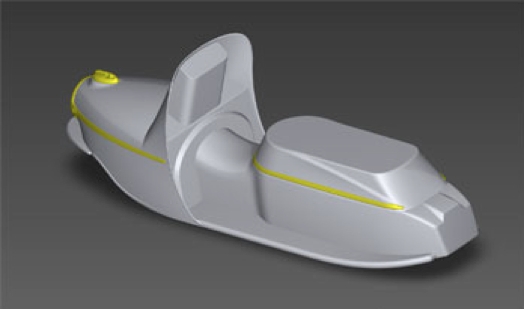 The scooter’s shell is formed in one piece, making it both strong and light.

The lightweight construction of the scooter’s shell has kept the weight at a reasonable level. Without the battery, the scooter weighs 115kg. Depending on its capacity, the battery adds 22 or 32kg.

The left handgrip is more like an old Vespa’s than a Type 501’s with a rotary shift to select riding modes. Presumably these will affect the range and maximum speed. There is also the welcome addition of a reverse gear, to help with manoeuvring. The motor is set up to recover energy from braking, which may increase the range. Seat height is 780mm and wheelbase is 1340mm.

Instruments are classic and in line with the Type 506’s look.

You can be sure of one thing: when you’re out on your new Cezeta Type 506 you will be the cynosure of all eyes. I was, the few times I rode my old 501. The scooter’s appearance is unique. But then it would want to be. Cezeta Motors is asking 13,000 euros for one of these.

My Type 501 cost me a tenth of that, by the time I had it fully restored…