Every year, the little town of Mandello on the shore of beautiful Lake Como in Italy is home to the biggest Moto Guzzi gathering in the world. In 2019, more than 30000 aficionados rocked up to showcase their own bikes, chat with fellow “guzzisti” and check out some of the new toys. 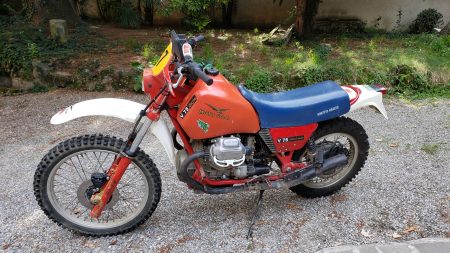 It is the 98th anniversary of the birth of the historical Italian motorcycle company Moto Guzzi, which opened the doors to its factory for three days to the visitors who braved the not-so-sunny weather.

In the factory, the obligatory sight is the Moto Guzzi museum. Some of the brand’s most iconic models are exhibited; classic names like Galletto, Falcone, Lodola and Alce, together with the intricate 500cc eight cylinder engine tell the fascinating story of Italian engineering and racing. That V8 represents the epitome of engineering for Mandello’s motorcycles and designer Giulio Cesare Carcano. 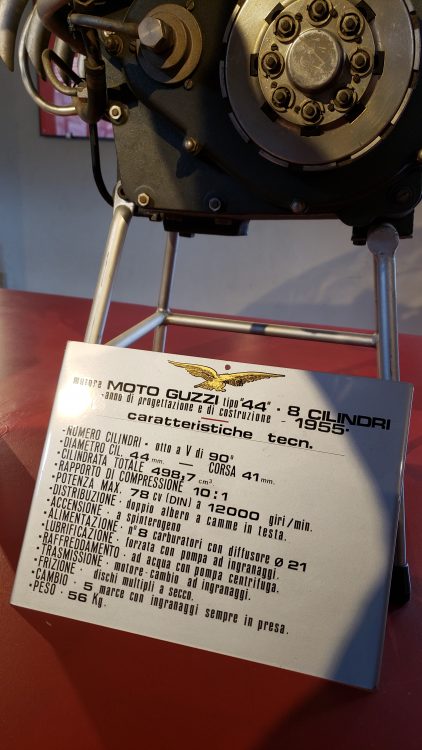 The collection includes many classics from the racing world with models that won eight world championships back in the ’50s; in 1937, the marque even won the Isle of Man TT race, with the famous Omobono Tenni riding the spectacular 250cc racer . 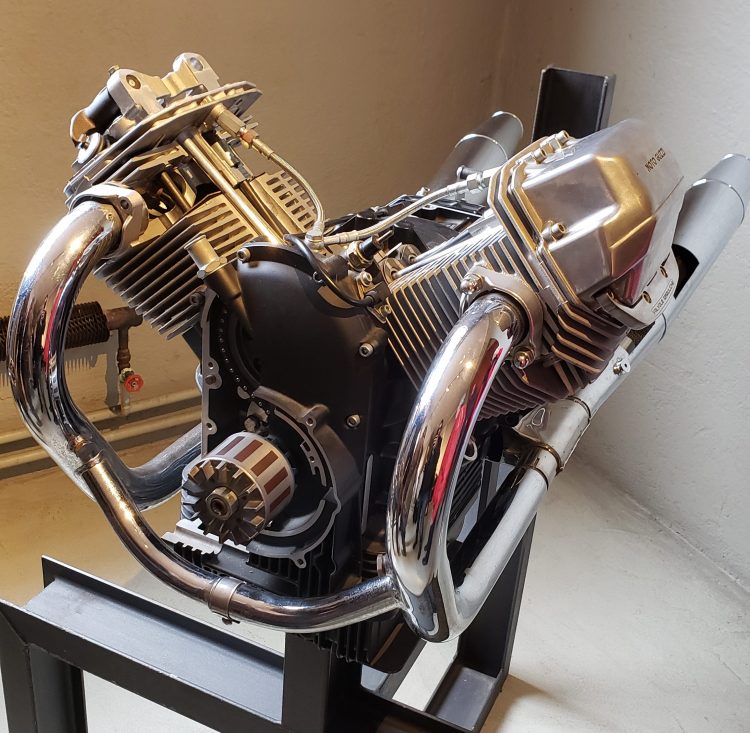 Moto Guzzi engineering has always been beautiful as well as effective.

On the walk through the factory, it was also possible to visit  some facinating sections of the company like the wind tunnel (introduced for the first time in 1950) and the engine assembly department; everything that a true Moto Guzzi lover would have wanted to see, really. 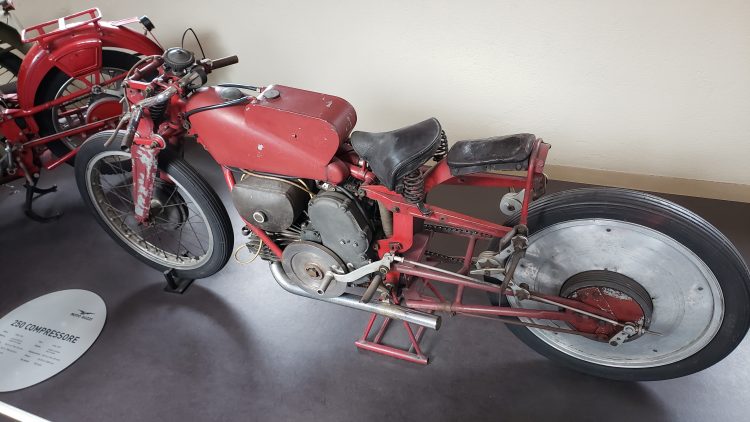 One of the first racing bikes made by Moto Guzzi, with the then typical horizontal twin engine.

As well as the factory, the organisers set up two extra attractions: one near the Carlo Guzzi monument in the town center, and another one along the lake.
People mainly came to gather with other Guzzi fans, to show their love for the brand and their passion for motorcycling; this event attracted a lot of people who, as usual, turned the town into a huge block party.
People came from all over the world, but the majority of foreign visitors were northern Europeans; it’s no secret that there are large groups of Moto Guzzi fans in Germany, Poland, Great Britain, Switzerland and Austria. 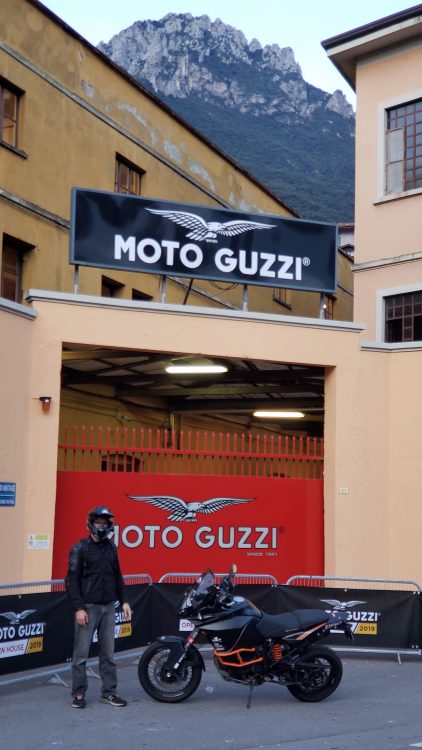 Me and Bronte (my motorcycle) in Mandello. We were definitely from the furthest away.

A lot of activities were available during the three day events in Mandello del Lario, including some interesting test rides. The star of the show was inevitably the super popular V85TT, which had no trouble justifying its outstanding sales thorough 2018 and 2019. 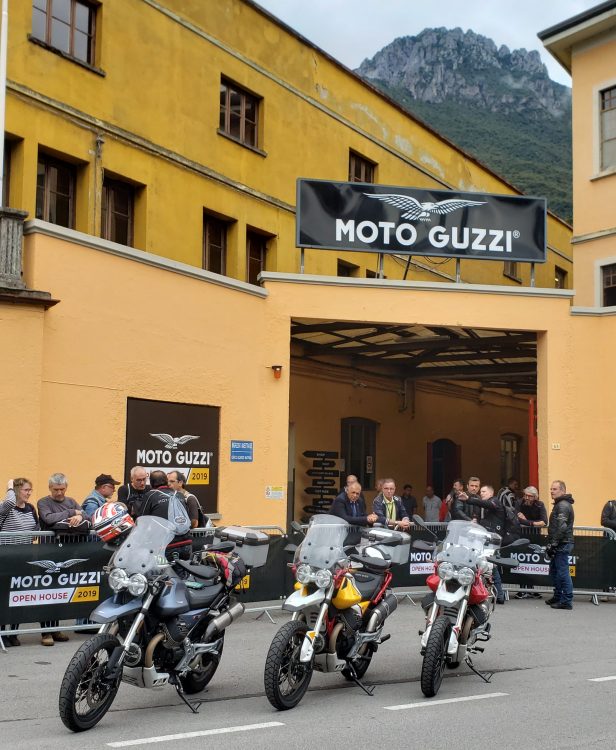 Three beautiful V85 TTs on display in front of the factory.

In second place, in terms of popularity, was the V7 III, which is most likely one of the best looking “cafe racers” out there.
The most memorable part of this festival though, was in my opinion made by the people participating to the event. It was wonderful to witness the variety of motorcycle styles present at the gathering. Being a Moto Guzzi event, the types of motorcycles showed off the entire range, varying from an old three wheeled pickup to sports bikes, to cafe racers, to military vehicles, to ex police bikes, and to large cruisers. 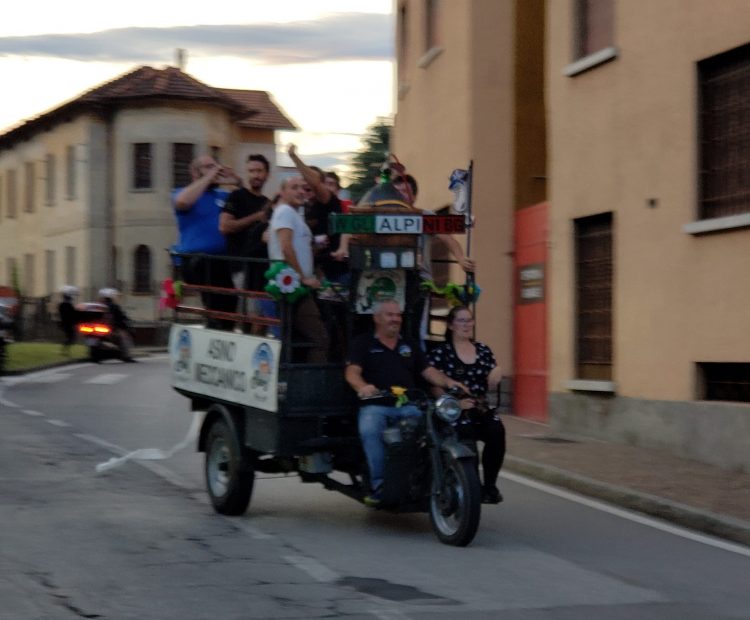 The “Alpini” partying on top of their three wheeler.

Moto Guzzi also has a history in Enduro racing back in the day, so there were some rare and remarkable dirt bikes. 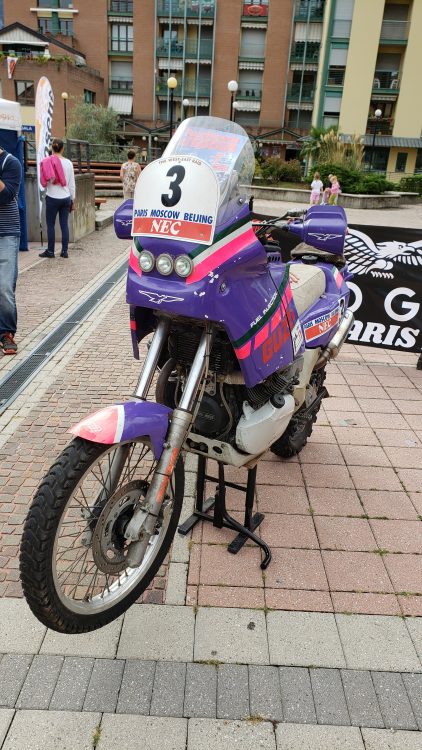 This Guzzi participated in the strenuous Paris to Beijing event.

This was the 98th anniversary of Moto Guzzi, so the firm is getting ready to organise the 100th Anniversary in 2021. That will be a very special year for all its fans and the company itself.
This year’s raffle had a brand new V85TT as first prize; I’m sure that there will be a “limited edition” model on the pedestal for that big event.
All I can say is that I sure hope Guzzi keeps releasing even more exciting models!