Of course you can. All you need to do is ship your bike to Yaviza in Panama and ride south-east to Chigorodó in Colombia. After about 125km and without the hassles of a formal border crossing, you will have traversed the Darien Gap. What do you mean, “can’t be done”? Didn’t you want an adventure?

At the other end of the scale, just spend a bit of time surfing the interwebs until you find an organised tour and book that. Then fly in, ride a preplanned route and stay in organised accommodation, and fly out again. Not an adventure, you say? That depends on how you look at it.

Not long ago I took a 14-day tour with IMT Motorcycle Tours through Green Spain. This is effectively Spain’s north coast, where the winds and laden clouds from the Bay of Biscay create a verdant countryside completely unlike the usual sere image of Spain. 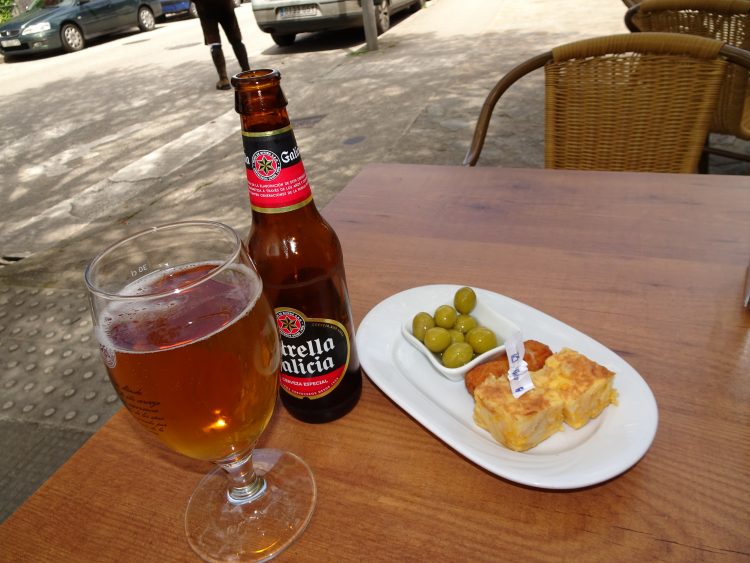 Order a beer in Northern Spain, and the snack comes with it for free.

Green Spain is truly, amazingly green while also offering the most spectacular mountains and gorges; but it still provides the food, drink and hospitality of the Spanish people amid enough variety to make you think you’re crossing half a dozen different countries. Even the language changes quite noticeably from the province of Galicia, where this tour starts, to Asturias, Castilla y Leon, Cantabria and Euskadi – the Basque country.

Arriving in Santiago de Compostela, where the tour starts, by plane seemed a bit cheeky. This is a stop on the Path of St James, and pilgrims routinely walk here from as far as 350km away. Once aboard our bikes – all BMWs and in excellent condition – our guide Martin (there’s also a van with a driver) took us for an easy run up the freeway and then one of the National Roads (these are generally in excellent condition but have very little traffic) before a turnoff onto a terrific back road to A Coruna and, after bypassing the city traffic,  to our first overnight stop. 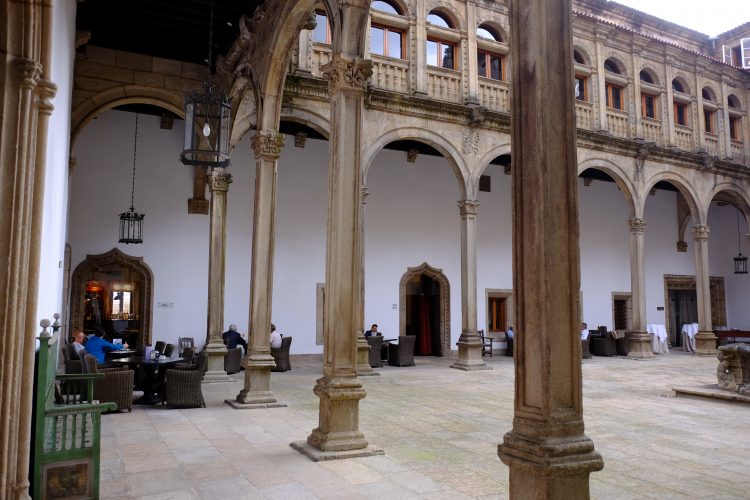 Believe it or not, this was one of our hotels. The rooms were just as grand.

Our hotel for the night was the first of several Paradores we would stay in. Paradores are a network of more than 90 state-run Spanish hotels. Don’t let that “state-run” put you off. Quality of everything including service is very high. Most Paradores are restored castles, monasteries, convents, fortresses, manor houses or palaces. They are are found in some of the most beautiful corners of Spain. Occasionally, where there wasn’t a convenient old building, a new one was put up.

Anyway, an excellent dinner was followed by an equally excellent night’s sleep – it does make sense to get to the start of a tour a day (and more importantly a night!) early to adjust to the time zone, which is what I had done at the suggestion of IMTBike’s Scott. 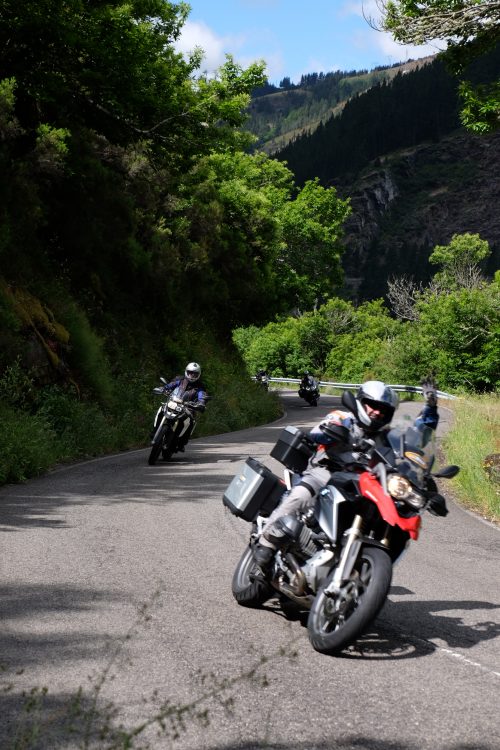 You can do this all day, both on the coast and in the hinterland. Road conditions do vary.

The next morning’s ride up along the Navia River was followed by a test of the bike and tyres on some more of those back roads. Outrageous fun, especially since there was once again almost no traffic. A few bicycles did act as moving chicanes, but unlike Australia, Spain does not seem to foster a culture of aggression on the road. A quick stop at the fishing village of Lastres, and then we turned inland again for Cangas de Onis at the foot of the Picos de Europa mountains.

The Peaks of Europe apparently got their name because they were the first sign of Europe that Spanish galleons returning from the New World over the Atlantic would see from the sea… see? The geology of the northern edge of Spain is seriously complicated, which is reflected in the constant changes of landforms. Fortunately for motorcyclists, most of them are rugged. The landforms, not the motorcyclists. Not that they’re not rugged too.

The Parador that night turned out to be the real thing, a beautifully and sensitively restored monastery which even has internal excavations displayed in a special room or under glass floors. This really brought home to me how effective and respectful the Parador concept is, using old buildings rather than roping them off and either letting them decay or making them a drain on state finances because nobody ever bothers to go and see them. Indeed, using the Paradores for accommodation is a bit of a secret weapon for IMTBike; spending the night in this kind of splendour certainly sets its mark on a tour. On top of that, the Paradores feature outstanding local cuisine; and the beer is always cold and affordable. 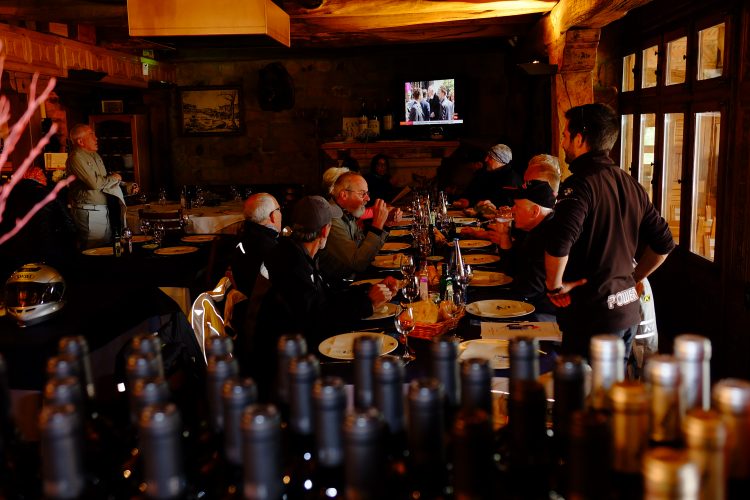 The food is outstanding; Spaniards live for food anyway, and it’s especially good here where things grow so well.

I should mention the breakfast, or rather breakfasts. They were all pretty similar and featured a superb buffet. I just love Spanish ham, or jamon (pronounced ham-on) and there was always a good supply of that. But there were other delicacies as well, and usually you could order dishes like bacon and eggs or an omelet, included in the room charge. Along with the wonderful crisp bread this was the perfect way to set yourself up for the day. 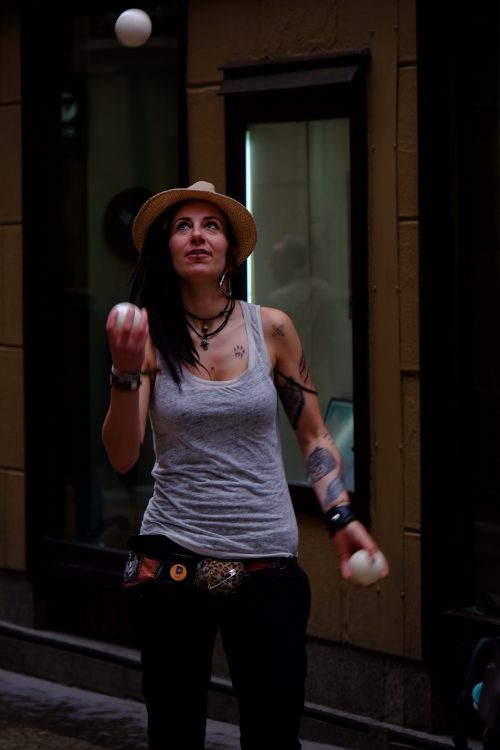 A juggler in San Sebastian. She had an entire jazz band to accompany her.

And so it went on for the entire two weeks. Highlights included some staggeringly deep river valleys with roads twisting along the slopes, the pinxtos of San Sebastian, more Paradores and more river valleys and clifftop roads and… you get the idea.

Not an adventure? It was to me.