With the announcement that Ewan McGregor and Charlie Boorman may once again be setting off on another road trip to potentially be called “Long Way Up”, a long festering wound was re-opened in my heart.  You may recall that in the original “Long Way Round”, Charlie Boorman wanted to use KTM 950 Adventure bikes for the trip.  At the last moment KTM backed down and the rest is BMW GS history.

So now that the wound is open again, I wonder whether KTM will make an effort to get their brand in front of millions of people before the pair leave for the Long Way Up.  Regardless of whether the bikes perform well on the trip, they will have gotten the KTM brand in front of millions of people, particularly those in North America where KTM is not very well known except for those who already into adventure/enduro riding.

If KTM doesn’t try to get in, I will be disappointed.  They could make their upcoming 790 Adventure available to the pair.  What a great opportunity to show and sell the new lighter and smaller machine.   Wake up KTM, get into the game! 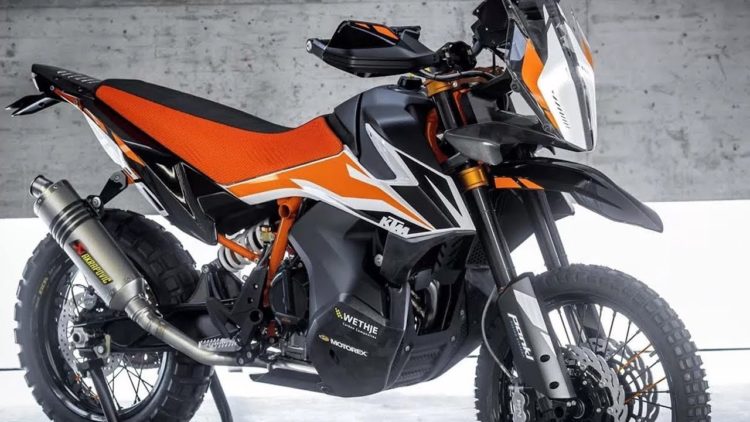 Below is the blurb that started me thinking.  Read it and then tell us what you think.

Let me start off by saying I love KTM motorcycles.  The little Austrian brand that builds high quality, very sporty, enduro motorcycles capable of covering all matter of terrain.  Actually, you might even say I am a KTM fanatic.  But sometimes, even if you are a fanatic, you have to call out your “hero” and tell them like it is.  Well, I’ve had something on my chest for the last seven years and it’s time I got it off.  So here goes…

If you saw the motorcycle adventure movie “The Long Way Round” with Ewan McGregor and Charlie Boorman, you have to ask yourself, “What was KTM thinking when they refused to give two actors three motorcycles in return for the world wide movie promotion of their motorcycle brand as they ride their way around the world on a charity mission?  Could a better opportunity presented itself to KTM on a platter?

So let’s boil this all down shall we?  Two actors, one of whom is literally known throughout the world as the planet hopping, Jedi master Obi Wan Kenobi, along with a lesser known actor who provides comic relief, want to go on an around the world trip using your less than well known brand of motorcycle.  They will also be making stops along the way, helping children while using your bike.   In addition, to help them along during their journey, they will have some help.  Not one or two people, but an entire support team.  The support team will have a 4 wheel drive vehicle, a doctor, satellite communications and several other people with the ability to make border crossings happen via influential people.  Hmmm….  does that sound like an opportunity for failure to you?  KTM apparently thought so.

Oh, and don’t forget…  The whole journey is going to be made into a movie!  The kind of movie where the reality can be changed “a little”.  In movies, through the magic of film making, things happen that might not happen in real life.  Can an actor play a “Jedi Master” who reports to a two foot green creature who is even a more powerful “Jedi Master”?  In movies they can.  Can an alien land in a spaceship that looks like a Christmas tree, befriend a little boy and make his bicycle fly?  In movies they can.  Can an ogre make friends with a talking donkey and marry a princess?  In movies they can.  Can a KTM make an around the world trip with two actors and an entire support crew?  According to KTM management at the time, apparently not; not even in a MOVIE!   Jeesh!

By the time the Long Way Round movie was in production, KTM had already won 4 straight Dakar rallies, one of the most gruelling tests of man and machine on the planet.  Thereafter, KTM would continue its winning streak with an additional 7 Dakar wins in a row, a true testament to the KTM marque and the ability of its machines (as well as the men who rode them of course).  So why would KTM balk at giving up 3 bikes which would more than likely have been the far better choice for the trip as Charlie Boorman had suggested?  Could it be that they took the word of a single “consultant” and just outright refused on one person’s viewpoint?  How shortsighted and terrible.

After the Long Way Round movie and its successor Long Way Down screened, sales of BMW adventure motorcycles skyrocketed.  Even though the big GS’s were oversized and heavy, had breakdowns and were difficult to handle when the conditions got rough, many people just want to be like Ewan and Charlie and latched on to the BMW adventure bandwagon.  BMW must send Ewan and Charlie flowers every time the sales of the GS’s climb and I for one wouldn’t blame them.  They’ve created a marketing phenomenon with adventure motorcyclists.  Just mention the Long Way Round or The Long Way Down and people think BMW.  Congratulations BMW.

As for you KTM  well, I hope you’ve learned your lesson.  You make excellent machines that win gruelling races and competitions.  But in North America, almost no-one knows about you.   You’ve got to come up with a way to get people to know you and let them find out how excellent your machines are.  Maybe you ought to call Charlie and tell him you’re very sorry for the error.  You have new KTM 990s just waiting for him at his garage with panniers etc. ready to go.  Call Ewan and tell him that anyone can do the long way round easterly, it’s time to do it westerly and no highways allowed.  Period.  And while you’re at it, show off some of those sexy KTM accessories and even some of those non-KTM accessories so people know they are out there too.  They’ll only make people want your machines more.

KTM, I’ll always love your machines but the group of us here in the US can’t keep the flame alive by ourselves.  You have to help.  When opportunity knocks, don’t slam the door.  Please.   Charlie and Ewan already have too many flowers from BMW.