Which Direction Should You Travel First? There are a few ways of looking at this but I’ll tell you about an experience I had over 30 years ago that honestly made me think and has affected how I travel today.

I had a friend in England who inherited a sizeable sum when he was about 20 years of age of around £100,000/ $150,000, he told me he was called to a law office to a reading of a will that he was the main benefactor, which at the time was a huge surprise.

Once he got over his emotions of losing a family member who he barely knew the thought of the money kicked in. “I must have had a crazy smile on my face!” He told me.

“My parents were logical, down to earth people, they told me to finish school, then get a job, buy a house, buy a reasonable car etc. and the inheritance isn’t a lot of money.” He smiled but shook his head, “I want to travel.”

His parents logic kicked in again and they sent him to meet a friend of theirs who was a financial advisor.

– “So your parents tell me you have had a windfall and are looking to make some sound investments.” The man on the other side of the desk asked.

– Frowning, “well actually no, I want to travel, they want me to be practical, I’m kind of stuck in the middle.”

– The financial advisor said “how about we do both. Tell me where you and what you want to see?”

– The financial advisor stopped him, “so basically the most expensive places on earth?”

Over the next hour or so they hatched a plan and my friend a month after finishing his final exams jumped on a plane to India, where he bought a motorcycle and traveled for almost five years traveling east. While this was happening the financial advisor invested the bulk of the money very wisely.

…but what did the financial advisor say? “The obvious destination isn’t always the best one to head to immediately. Countries with a cheaper cost of living will normally work out to be much cheaper to travel in, more expensive countries will normally be a lot more expensive. So the logical direction is to explore the cheaper countries first and travel slowly while you let your saving/ investments work for you in the background!”

…and to this day my friend is still traveling. 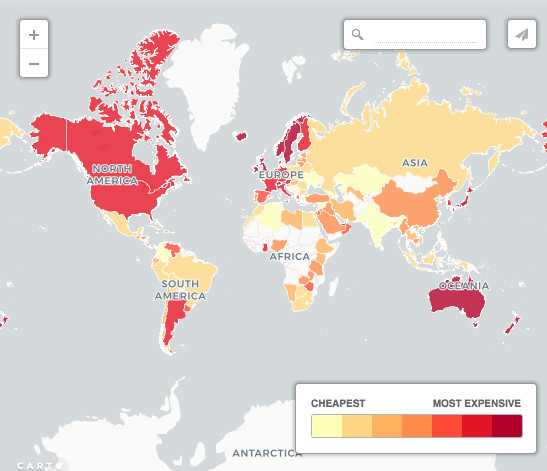